Mockingjay simply isn’t a very long book. It’s worth acknowledging that when pondering why it was a misguided decision to split the final Hunger Games film in two. And it’s what makes this saga so different to previous situations with the Harry Potter and Twilight franchises, which had longer final books. As a novel, Mockingjay is 390 pages long—making it not even the longest instalment of Suzanne Collins’ trilogy—and, surely, easily adaptable within a relatively similar running time as the previous two films in this series.

Solely considering the length of the source material ignores the content of it, though, because that’s both its main strength and what makes Mockingjay the trickiest of the books to adapt for the screen. It’s all inner turmoil, pain, post-traumatic stress disorder, and depression—with a side order of devastating consequences. Because the conflict within this narrative is largely internal, screenwriters Peter Craig, Danny Strong and Collins have the challenging task of externalising the conflict that Katniss Everdeen (Jennifer Lawrence) faces. They mostly succeed, as she and her fellow rebels finally bring their battle to the Capitol, committing to a mission to kill malevolent President Snow (Donald Sutherland).

While messy, Mockingjay Part 2 ultimately works because it understands how this story is meant to make you feel. It’s a bittersweet ending, and makes sure you know that right from the start. There’s a real human and psychological cost here, as the series continues to explore not only how much life is needlessly lost in a war but also how much of a person can be eroded by participating in one. There’s not a single character who makes it from the beginning of the series to the end without having been changed in a hugely consequential way. Fittingly, many don’t actually make it to the end at all. More so than any other film in the series, this one comes with a high body count; frequently shocking and aggressive in its handling of violence. 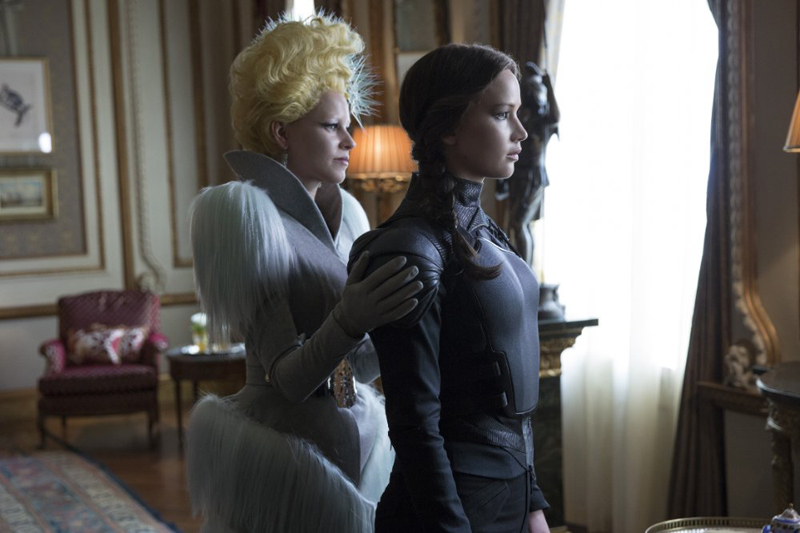 It’s not action and violence that marks The Hunger Games out, though, nor is it the love triangle that’s mercifully only mentioned by Peeta (Josh Hutcherson) and Gale (Liam Hemsworth) very briefly this time. What’s most distinctive about this series is its thoughtfulness, the level of intrigue in its allegorical nature, and how it manages to always feel current and politically relevant. This has been especially effective in the screen adaptations, where the role of propaganda and media in war has been more throughly explored than it could ever be on the page.

Rebellion is a striking and inspiring idea—especially when it comes to freeing people from oppression and poverty—but the story frequently takes time to recognise the pain and suffering of war. It presents us with the notion that conflict is always cyclical, because there’s always somebody stronger taking advantage of somebody weaker, and violence can’t solve those problems in the same way raising your voice and showing defiance can. But your voice alone is not enough to topple a regime, that’s the dichotomy the story sees, and it perhaps argues that progress and violence are inextricably tied together. However, if you’re coming to this expecting wall-to-wall action, you may be disappointed—this story was always going to prioritise moral dilemmas over physical action at its conclusion.

That’s not to say there aren’t great action scenes here. There are, but they aren’t as plentiful as many people are expecting from a big finale. The narrative sets up an environment in which the Capitol itself has been mostly evacuated, with the city full of booby-traps to prevent rebel forces advancing (essentially making it “the 76th Hunger Games”, as Sam Claflin’s Finnick states). The best of its action is also the most pivotal: a close-quarters fight in the Capitol’s sewers that features the film’s best jump-scare and exhilarating combat. Clever additions in the script allow this moment to come as a direct consequence of other actions too. Where in the book threats seem to appear from nowhere at all, here they’ve been deftly blended into the plot and become the results of characters’ actions. 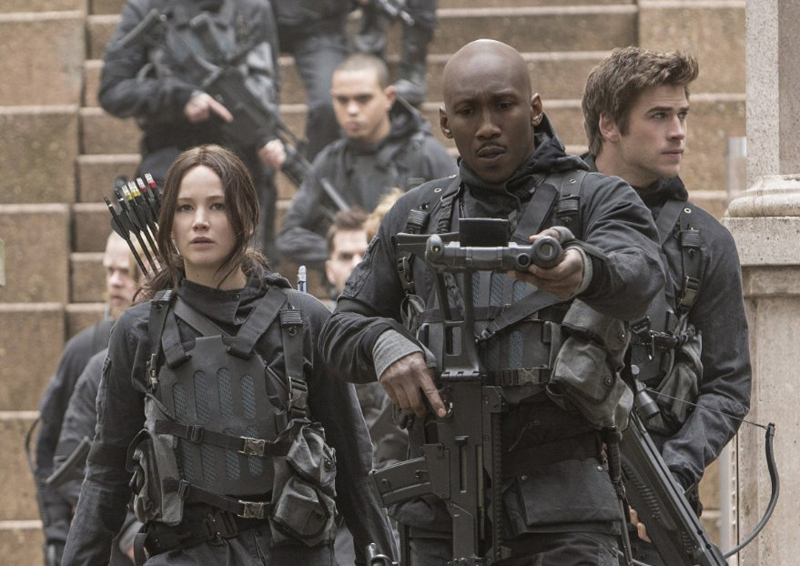 In the moments between the action scenes, the film does occasionally drag. There’s a lot of additional bulk to the narrative, and so much could’ve been gained if Mockingjay had streamlined into a single film. It’s got tension to make your pulse race, and devastating emotional consequences to make your heart ache, but you might find yourself bored during the space between those sequences. Carrying across the narrative so faithfully from the book is admirable, but in the Mockingjay novel Katniss is far more of a passive character because the conflict is within her. This is a great example of something that’s effective on the page, when you’re privy to her thoughts and feelings, that was always going to struggle in a visual medium. A true look at the psychological impact of war on a person is just too difficult to deliver here in a way that feels natural.

The decision to split the story in half damages the flow of its narrative. Perhaps the finale to the series does benefit from additional time being spent with these characters, deepening their feelings and developing their personalities, and the extra world-building that comes with it, but it could’ve been cut down considerably.

Still, it moves at a quick pace for a decent chunk of its running time, so the fact it’s stretched out feels a little less irritating than it did in Mockingjay Part 1, especially in the first half. Throughout the film the performances are excellent, too: Lawrence again at her absolute finest in this role, bringing a restrained and multi-layered portrayal of Katniss, deep with complexity; and Hutcherson doing his best work as a Peeta, who’s been fundamentally changed by his experiences, leading to an unbalanced mix of emotions as he recovers from torture. The background players are all tremendous, too, with Woody Harrelson, Sutherland, Julianne Moore, and the late Philip Seymour Hoffman (in his final film appearance) all turning in superb performances.

It’s messy and overlong, sure, but Mockingjay Part 2 works because it manages to deliver an ending that feels right for the series. There’s rebellious spirit here, but also a great deal of loss, and a real sense that things have been irrevocably changed. That’s the same feeling the books conveyed so well, and the movie’s conclusion will have a strong impact for both bookworms and filmgoers alike.

writers: Danny Strong & Peter Craig (based on the novel by Suzanne Collins).