Every song must end. Clara Oswald’s (Jenna Coleman) comes to an end so matter-of-factly when Rigsy (Joivan Wade), last encountered in “Flatline“, rings her in the TARDIS. He’s concerned about a strange tattoo he acquired overnight. It doesn’t augur well, however, if we consider the symbolism of tattoos. In the nineteenth century, tattooing was a common form of marking, depersonalising, and stigmatising prisoners. We soon discover that Rigsy is accused of the murder of an alien, Anah, and must face the consequences; a death sentence on his neck ‘counting down to zero’.

It’s not just Rigsy we need to worry about. Clara’s getting very blasé about her adventures and seems to have left her day-to day life as a teacher far behind. Is she still on the Coal Hill School payroll? This is brought to the fore when the domestic milieu of Rigsy’s life in London, now married and with a baby daughter, is placed in stark contrast to Clara’s sense of abandonment. She’s either larking about on planets full of sentient plant life, or hanging out of the TARDIS as The Doctor (Peter Capaldi) sweeps London looking for the place where Rigsy acquired his “very not boring” tattoo on a day that, in true Torchwood fashion, has been retconned from his memory. 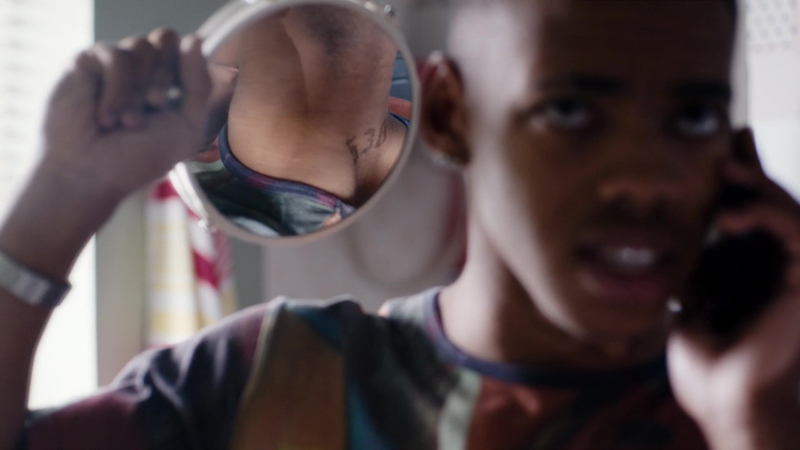 Frightened by the revelation he’s about to die (bluntly informed by The Doctor after referencing his social etiquette cue cards last seen in “Under the Lake“), even Rigsy notices the deal with Clara. “She enjoyed that way too much,” he suggests as Clara returns from almost falling out of the police box. “It’s an ongoing problem,” acknowledges The Doctor. A problem that won’t be ongoing for much longer judging by the pre-publicity surrounding this episode.

An interesting aspect of Sarah Dollard’s “Face the Raven” is how it shrinks down architectural space as the stakes get higher. Clara’s view of London, a vista of familiar skyscrapers seen from the TARDIS as it scours the capital for the hidden enclave Rigsy visited, is reduced to one of those confined spaces that Doctor Who seems to be constantly returning to this series; firstly to a dark alley and finally to a single room.

The end of her story is a moment of self-sacrifice in an alien refugee camp tucked away behind familiar architecture. This street, like Dickens’ London of squalid labyrinths housing the poor and the dispossessed, is a place of hiding, secret knowledge, and unwitting self-revelation. It also returns to the ‘aliens among us’ theme of “The Zygon Invasion” and the scare stories circulating in the press about terrorists lurking among the refugees streaming into Europe to seek asylum. And if we go back to classical literature, the street is a crossroads where tragic inevitability unfolds. 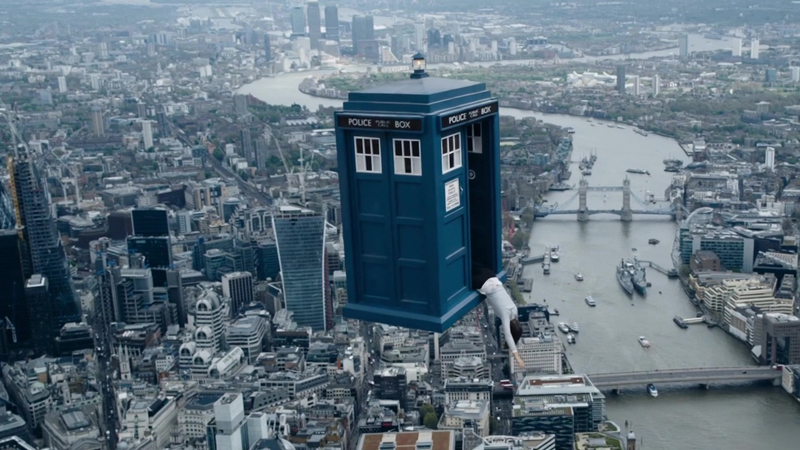 The ‘trap street’ hidden by dint of a misdirection circuit is rather conveniently named if one considers the narrative as a switch-and-bait mystery setup to ensnare The Doctor and teleport him to who-knows-where. It is architecture configured as mythological space. The cursed tattoo, counting down to death and encumbered with its esoteric instructions, immediately reminded me of the similarly afflicted symbols in M.R. James’s “Casting the Runes”, an occult death threat passed on to victims and irreversible unless they too can surreptitiously hand it on to an unsuspecting friend or foe.

“Face the Raven” takes place beneath the veil of an ordinary street, “like a smuggler’s cove, only not a cove, because it’s right here.” It’s a hidden world occupied by familiar aliens and overseen by Mayor Me (the returning Maisie Williams). Like the London Gothic of Neil Gaiman’s “Neverwhere”, or the works of Iain Sinclair, Christopher Fowler and Ben Aaronovitch, it’s London as a pseudo-Victorian realm of birds of ill omen, curses, deadly quantum shades and two-faced seers; a place where reality has glitches in it and where Cybermen, Ood, Sontarans et al “fit within the compass of your expectations and experiences.” 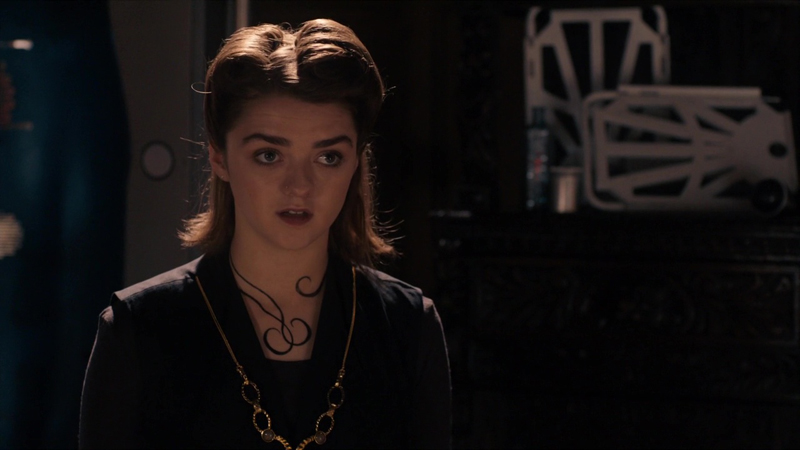 But the murder Rigsy is supposed to have committed is revealed as a lure to bring The Doctor within Mayor Me’s realm. Rigsy was deliberately called to the hidden street to take the blame, but Me is—as ever—a rather unsympathetic creature, condemning Rigsy to death for Anah’s murder as a way to ensure The Doctor’s curiosity is aroused and betraying the Time Lord to unseen, powerful masters. She also demonstrates the fate of those that break her rules when a thief’s forced to ‘face the raven’; the archetypical bird of death and prophecy, symbol of the Underworld and the manifestation of Me’s quantum shade. It’s at this moment Clara’s fate is sealed. She overhears the thief’s wife asking him to pass the curse of the chronolock onto her and, intrigued, she then further interrogates Me’s devious associate Mr. Rump (Simon Paisley Day).

Clara’s recklessness is her own undoing here, and in that respect “Face the Raven” is an interesting companion piece to “Flatline”. In the latter Clara takes on the agency of The Doctor, helping Rigsy overcome the threat from the Boneless, but here she attempts to be The Doctor—believing herself just as impervious to death as he is. Immortality and all its ills are still a central aspect to the current season, and the danger here is that Clara forgets she’s a human mortal and does not comprehend the gravity of taking on Rigsy’s quantum shade, where “you can pass it on… but you can’t cheat it.” 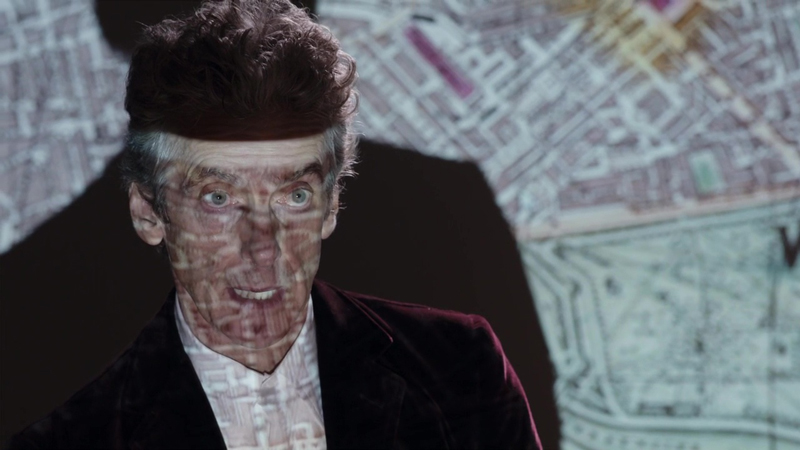 Under orders from her masters (who suspects either Missy, Davros or the Time Lords?), The Doctor is trapped into submitting his TARDIS key to the machine keeping the ‘murdered’ Anah alive when her son Anahson (Letitia Wright), a two-faced Janus psychic who can look into the past and the future, reveals Mayor Me’s subterfuge. He’s as reckless as Clara trying to save Anah but the big difference is that’s he’s capable of surviving the consequences. “They” want The Doctor, his confession dial, and to eradicate any trace of him by confiscating the TARDIS key—but Me did not expect Clara would do “something so stupid” and get caught up in the repercussions.

Jenna Coleman plays the final realisation of Rump’s warning brilliantly. The true nature of her very human fate weighs on her shoulders as Me simply reduces the matter to contracts and deals, an agreement with the shade that cannot be broken. This impending death only reveals that other side to The Doctor; the warrior who can “rain hell” on Mayor Me and her hidden world, the unfettered power of the Time Lord who can only be held in check by his compassionate companion. It’s a somber scene that ends with Clara facing the inevitability of her mortality (a sacrifice similar to Danny’s in “Death in Heaven”), and perhaps Clara admits “maybe this is what I wanted” as an answer to all that running and recklessness. It catches up with you in the end.

When her body finally crumples onto the cobbled street, there is an overwhelming feeling that this isn’t the end. The Doctor is incredibly quiet and reserved. There are no histrionics. It’s sad but not particularly so because her demise has been telegraphed for such a long time now, and all the publicity has drained away any shock or surprise from the situation. The death of a companion needs to be, as Russell T. Davies once intimated, a moment of garment rending sorrow. I was bereft at what Davies did to Donna Noble—a spiritual death rather than a physical one—but I’ve never really felt like that about any of Moffat’s companions—because for him death is always a sleight of hand affair and he can never leave them truly dead. 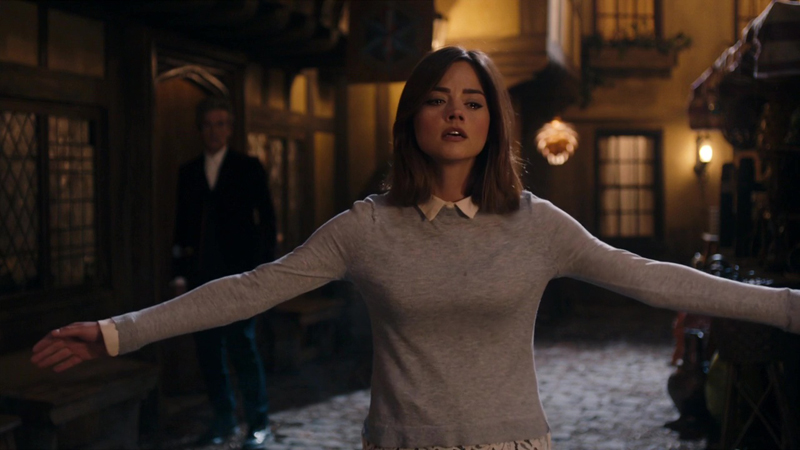 There are also spoilers out there that suggest we’ll hear or see more of Clara. And surely there should be some reckoning with the fate of the ‘impossible girl’ plot device, who first turned up in “Asylum of the Daleks” and whom we saw splintered throughout The Doctor’s time stream in “The Name of the Doctor”? There have been many visual hints to her first appearance. Are they just call backs with no further relevance?

Suffice it to say even if this isn’t quite the last we’ll see of her, Coleman and Capaldi handle Clara’s farewell and sacrifice with great sensitivity, revisiting the ‘duty of care’ issues that The Doctor has been reminded of throughout this series. Clara also returns to the theme of The Doctor’s need for a companion, to pull him back from fury and sadness. It’s a ten-minute scene played in one room between four characters, again underlining the way the series tells stories within a confined space as a form of expressive minimalism where the world building and location dissolves into something impressionistic.

Dollard’s script is a dark meditation on death, fate and the consequences of hubris, full of rich ideas and symbolism. It leaves the Doctor alone and vulnerable, teleported away before the impact of Clara’s death can sink in. Hopefully, he’ll remember her last words: “Let me be brave, let me be brave.”