Did you hate Star Wars: The Last Jedi (2017)? There are legitimate problems with it and I understand why many disliked the direction Rian Johnson took things, but it was the bold shakeup Star Wars desperately needed. And it undoubtedly happened because fans complained Star Wars: The Force Awakens (2015) was too formulaic, so ‘be careful what you wish for’.

If you railed against The Last Jedi for dismissing theories you’d invested a lot of time into, Disney heard you, or maybe J.J Abrams agreed with you… so The Rise of Skywalker is as predictable and unchallenging as it comes. An empty vessel of breakneck pacing and extravagant VFX, that awkwardly course-corrects what came before and ends up feeling rushed and disjointed. Congratulations.

It’s almost impossible to review The Rise of Skywalker without touching on some spoilers, so if you haven’t seen the movie please come back once you have…

The big selling point of The Rise of Skywalker is the “surprise” return of Emperor Palpatine (Ian McDiarmid), Star Wars’ ghoulish puppetmaster who’s lurked behind most of the previous movies. Despite dying in Star Wars: The Return of the Jedi (1983), he’s been resurrected—details are murky, alas—and is now an ailing zombie on the hidden Sith planet of Exegol. How he got there when the Death Star he was inside was destroyed above Endor, which we even see and revisit during this movie, is anyone’s guess! It’s revealed Palpatine created Supreme Leader Snoke to control the First Order and turn Kylo Ren (Adam Driver) to the Dark Side and is now trumpeting his return across the galaxy, which lures Kylo to Exegol to destroy his potential usurper. And the revived Emperor is ready to end the Resistance once and for all, by unveiling a secret armada of Star Destroyers—all fully staffed and armed with miniature planet-destroying weapons, somehow.

There isn’t much of a plot to The Rise of Skywalker. If Force Awakens was about trying to find Luke Skywalker, here it’s about trying to find The Emperor on Exegol. Kylo knows the way already having found a Sith Wayfinder doohickey but is also chasing after Rey (Daisy Ridley), determined to turn her to the Dark Side. While there are plenty of diversions with excuses for land and space battles in stunning locations, much of it feels like a repetitive chase with a predetermined climax for an audience with the Emperor.

The cast has expanded so much it’s difficult for everyone to have something exciting or worthwhile to do. Leia (Carrie Fisher) appears thanks to unused scenes from The Force Awakens being repurposed (surprisingly well), but her role isn’t as potent as it would’ve been had Fisher actually been on-set; Poe Dameron (Oscar Isaac) has a half-hearted “romance” with a ‘Power Ranger’ called Zorii Bliss (a wasted Keri Russell); Finn (John Boyega) has become superfluous and his relationship with Rose (Kelly Marie Tran) is brushed under the carpet, now the latter’s relegated to a background role; C3-PO (Anthony Daniels) has an emotional moment of self-sacrifice involving droid amnesia, only for that to be undone because the writers lost their nerve; someone realised General Hux (Domhnall Gleeson) has been a crushing disappointment, so he’s effectively replaced by Allegiant General Pride (Richard E. Grant); and then Lando Calrissian (Billy Dee Williams) shows up without fanfare to loiter around the edges.

Most of the emotional heavy-lifting is placed on the shoulders of Adam Driver and Daisy Ridley as the two halves of this trilogy’s struggle between the forces of Good and Evil. And both actors do great work within the limitations of what they’re working with. Driver is dependably excellent, peaking in a scene where he’s reunited with his late father Han Solo (Harrison Ford)—as it’s inherently emotional to converse with the ghost of a dead loved one, but particularly if they’re offering forgiveness for patricide. Kylo’s switch from Dark to Light is one of the few things The Rise of Skywalker handles well, so I’m pleased his arc ended in a strong way—echoing Darth Vader’s own.

But this is the problem with Star Wars, or at least ‘The Skywalker Saga’ as the nine core movies are now being referred to: it’s always content to refer back to what’s come before and just rehash things. This was an issue with the divisive prequels, too, but it’s exacerbated in Disney’s sequels because the story is clearly only being told for financial reasons. The Return of the Jedi ended the war and killed both the Emperor and Darth Vader, so having three more stories emerge has always felt unnecessary. It retrospectively damages the hallowed original trilogy, too.

Some of the ideas about how to continue the saga have worked for me—like Ben Solo being a tormented brat, jealous of his famously evil grandfather’s infamy—but a lot is forced and unconvincing. I appreciate they wanted to tell a younger generation’s story (set in the shadow of their parent’s mythic past), but that story has leaned so heavily on iconography and recycled plot-points it never felt fresh enough to justify its existence.

There’s been an awkward middle-ground, with this trilogy striving to move on with new blood (Rey, Finn, Poe) on a different epic adventure, pushing the old guard into supporting roles (Luke, Leia, Han—who never once appeared together), but the trilogy has struggled to find its own magic and relevance. And that’s most apparent in The Rise of Skywalker, with the abrupt return of the Emperor feeling like a hasty reaction to The Last Jedi literally cutting Snoke out of the story. And Palpatine’s yet another original trilogy presence that haunts the viability of the new one.

On a technical level, it’s hard to fault The Rise of Skywalker. It looks and sounds tremendous, as $300M tentpole Disney blockbusters should. But there’s little here that anchors the story emotionally, as it’s more like a parade of beautiful things to look at without many underpinnings. The Force Awakens had its share of spectacle, but the story flowed and everything was fun and things felt justified and logical (if indebted to the first Star Wars).

The Last Jedi received unwarranted flak for slowing the pace and spending time with the characters and putting them in tough situations, so now The Rise of Skywalker is in a dizzying rush to… well, nowhere new. A sort of excessive Return of the Jedi remake? The opening action sequence of The Last Jedi had more tension, heart, sacrifice, and drama than anything that happens in this finale.

There are only a couple of graceful moments that hint at what Rise of Skywalker could’ve been with less fear over giving fans what they need and not what they want. The best one takes place in a cave where a lost Rey is confronted by a nasty-looking burrowing worm and decides to heal its wound instead of run or fight the creature. She’s rewarded by the monster revealing the way out as a thank you. It’s the Star Wars version of ‘Androcles and the Lion’, but unfortunately one of the few scenes with patience and heart. 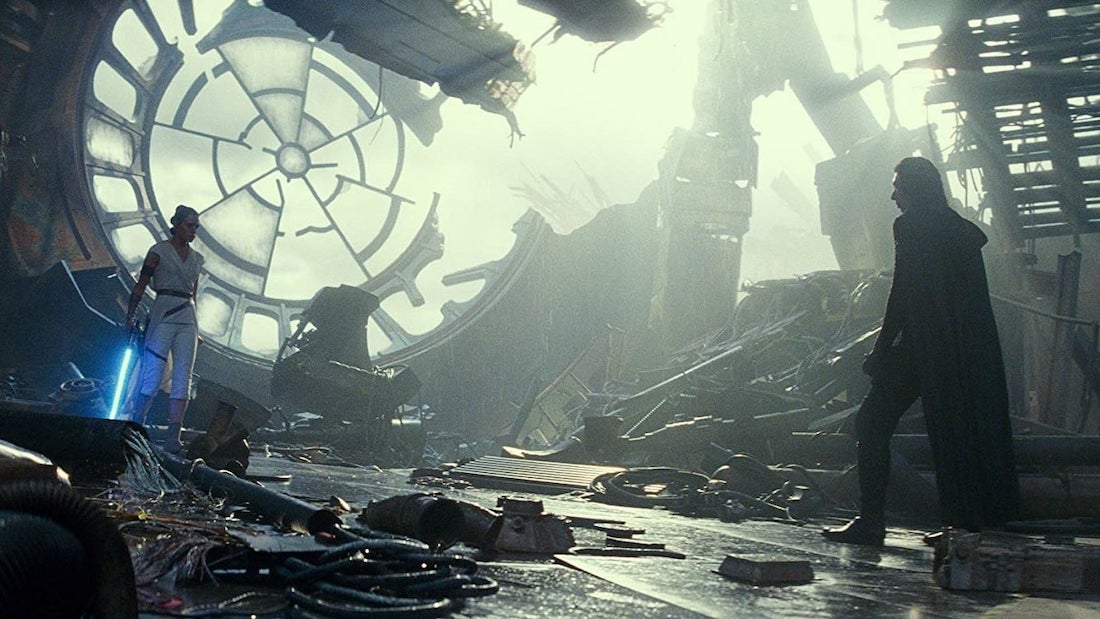 Ultimately, Star Wars: The Rise of Skywalker has enough momentum and cool moments to justify buying a ticket for a few easy thrills. Just don’t expect it to provoke much discussion afterwards. There were several moments that got my pulse racing in The Last Jedi, that I wanted to revisit again soon after, but here nothing stands out beyond the odd creative visual Abrams is good at finding amidst chaotic storytelling. There are cool moments and the appeal of Star Wars means learning the fate of major characters will definitely push some buttons, but there’s not much that feels essential and surprising. Big questions are answered by undoing The Last Jedi’s brave approach to Rey’s parentage, sadly, but at least it does feel like a somewhat definitive conclusion to the whole shebang… 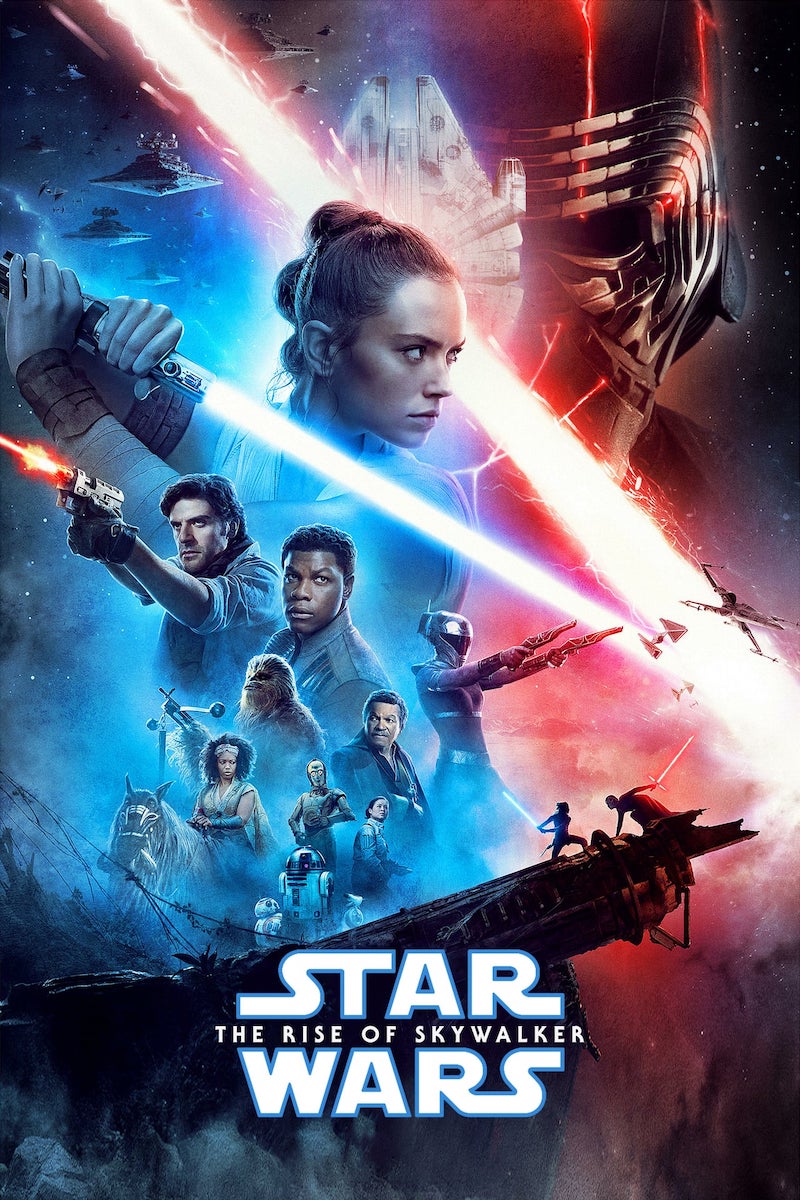