There’s a risk mid-season finales will disappoint because the narrative hasn’t built up enough steam, but “Into the Forest I Go” felt like a decent conclusion to the whole season. Or at least a confident pivot towards a new destination. It certainly brought much of the divisive Klingon subplots to an end, at least for opportunistic Kol (Kenneth Marshall) and the infamous ‘Ship of the Dead’, while giving Burnham (Sonequa Martin-Green) welcome closure over the murder of Captain Georgiou.

A lot of “Into the Forest I Go” was a chance for Star Trek: Discovery to once again flex its action muscles, with a satisfying mission that was both visually dynamic and cleverly put together. Captain Lorca (Jason Isaacs) went against Starfleet orders to protect the planet Pahvo from the approaching ‘Ship of the Dead’, as his crew devised a plan to see through the Klingon ship’s new cloaking technology. The answer: calculate its whereabouts using the infinitesimal readings left behind by the slight change in gravity around its position in space. The problems: doing so requires two beacons to be placed aboard the ship, and 133 rapid-fire spore-jumps to gather enough data to number-crunch. 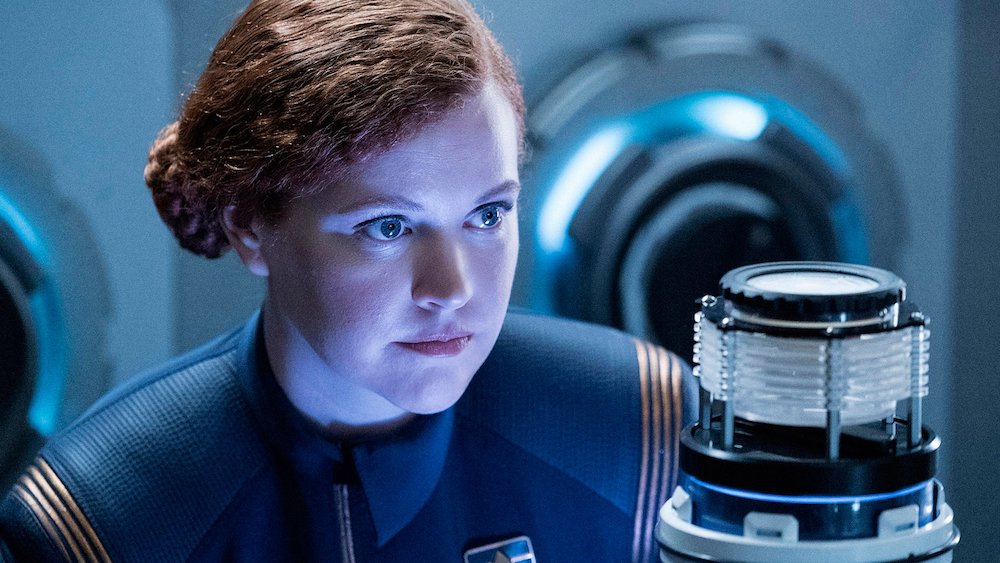 I like how this season’s built up our knowledge of the spore technology, so it now seems as familiar as going to warp. The human toll on Stamets (Anthony Rapp) has also been nicely foreshadowed, although there’s still no explanation for the ‘mirror anomaly’ from awhile back. I’m not a fan of how fragmented some of the story has felt so far. However, as the system’s crucial component for navigation, this episode did a good job turning Stamets into a somewhat reluctant hero. I wish his relationship with Dr. Culber (Wilson Cruz) was slightly deeper, as I don’t yet have any real feelings about them and wouldn’t shed a tear if either died, but the actors have made their closeness feel genuine. Maybe it’ll just take time before we really come to care, as the show’s still very new. I certainly hope they get a story to themselves so we can really understand their dynamic better.

With Stamets essentially asked to stand in a glass box and grimace with pain, the more interesting action rested on the shoulders of Michael Burnham and Ash Tyler (Shazad Latif) after they’d beamed aboard the ‘Ship of the Dead’ to plant the two beacons. It made for a tense sequence with them both sneaking around an enemy ship, and I appreciated how the mission grew to involve the rescue of Admiral Cornwell (Jayne Brook) — who thankfully is still alive. 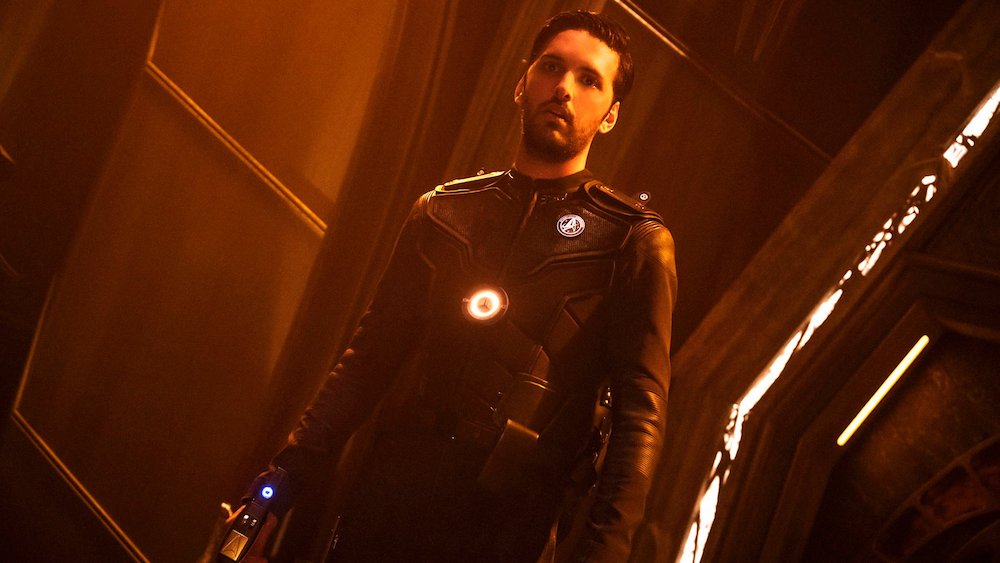 And it was here the episode started to tease us about the true nature of Tyler, as he came face-to-face with L’Rell (Mary Chieffo), who appeared to recognise him. As well she might, being his interrogator from when he was a POW? The flashbacks to Tyler undergoing some nasty procedure appeared to be a symptom of PTSD, but for those keeping up with online fan theories it also seemed to confirm Tyler is L’Rell’s albino lover Voq. But the uncertainty work, as I started to doubt the theory and consider it was just overthinking matters.

However, by the end of this hour that seems almost certain that Tyler is Voq in disguise. He wasn’t tortured by Klingons for months, he underwent a radical medical process that gave him a human appearance and appears to have addled his mind. As I mentioned in last week’s recap, it answers a lot of odd questions about Shazad Latif’s role on Star Trek: Discovery. The actor was originally confirmed to play a Klingon before being “recast” as Tyler (which prompted a lot of murmuring about the production being in jeopardy), and there has been a vagueness surrounding “Javid Iqbal” (the actor who allegedly plays Voq, but is likely subterfuge). Given that the “torture” actually resembled a facial operation, and that L’Rell later comforts Tyler when he goes to see her in Discovery’s Brig… this episode removed much doubt. 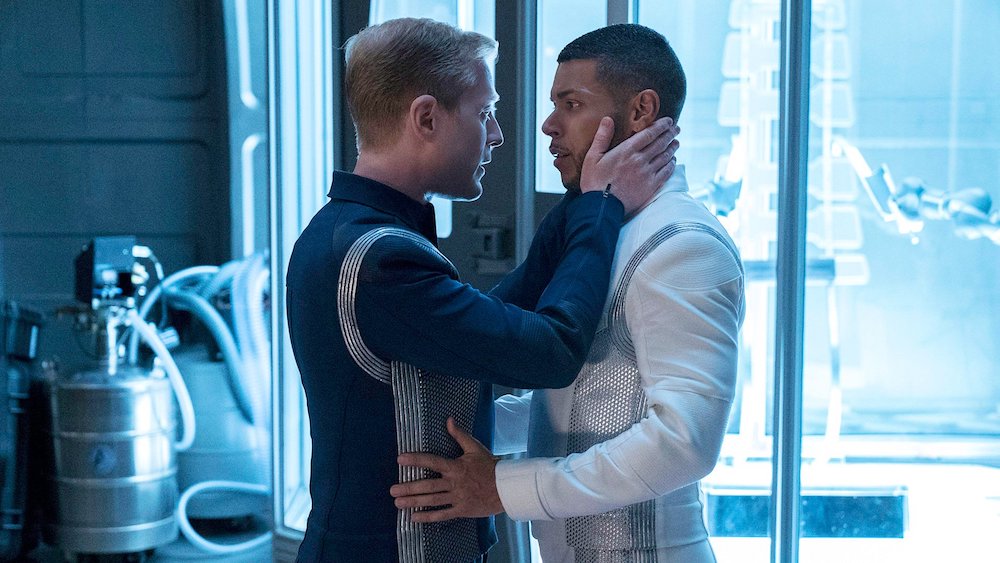 I wish I hadn’t been spoiled by the hive-mind of internet theorists, frankly, but it was very conspicuous that Voq disappeared from the narrative just when Tyler arrived. Even if you didn’t put two and two together yourself, you may have been understandably puzzled that the show appeared to ditch a character setup as being the primary villain. Or anti-hero. The deception would have worked better if Voq’s fate had seemed more definitive, with flashbacks filling us in on what happened after he was castaway by Kol.

Still, perhaps we should just be grateful that Tyler’s unmasking as Voq looks to be just around the corner, so the writer aren’t going to drag this matter out for the rest of the season. I’m interesting to know for what purpose Voq underwent this whole procedure, because the transformation clearly wasn’t just physical. He seems to believe he’s a human called Tyler, who must surely have existed because there are records of him in Starfleet.

So did Voq suddenly discover an incredible ability to mimic humans, and one in particular? Can you really change your outward appearance to fool life sign scanners? And of what value has it been to send Voq undercover as “Tyler”, if he’s totally unaware of the mission he’s on? Maybe there’s some Manchurian Candidate going on, and he’ll return as Voq when L’Rell whispers a secret phrase into his ear to “activate” him as a sleeper agent. 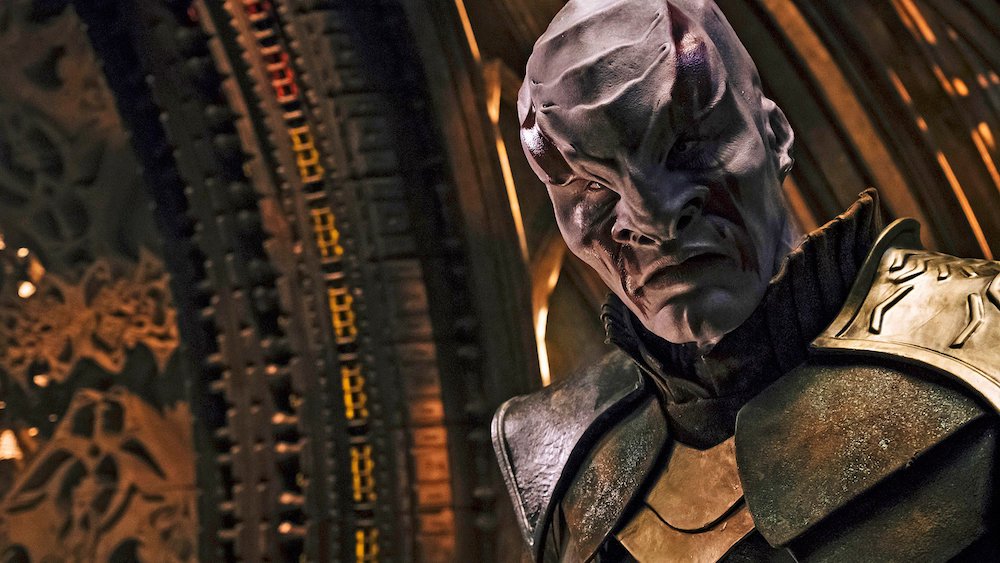 “Into the Forest I Go” managed to end this half-season with excitement and flare, plus a slightly different vision for where the story will go. Burnham’s fight with Kol was very gratifying, particularly when she managed to steal back Georgiou’s battle-scarred Starfleet insignia. Stamets also decided to stop putting his health at risk with the painful spore-jumps, only to push his luck once more and send the Discovery somewhere… else. My guess is that he’s thrown them into the Mirror Universe, hinted at with his reflection looking devious and moving independently awhile back…. but we’ll see. It could just be somewhere very distant, although I doubt they’re about to hitch themselves to Star Trek: Voyager’s “lost in space” concept.

There’s still a lot of work for Discovery to do as a TV show, but it’s moving in the right direction. I think people forget that most Star Trek series took a few seasons to find their identity, which back in the ’80s and ’90s meant finding your feet took over 40 episodes! Viewers lack that patience now, so the fact this is only episode 9 is still rather impressive. I like the show, and I’m growing to appreciate the characters. I just hope the stories get a little more diverse, and more of an ensemble feel starts to happen. Setting the whole series during the war between the Klingons and Federation is… a choice… but it’s currently nowhere close to as interesting as Deep Space Nine’s war arc against the Gamma Quadrant’s inhabitants.
However, due to the good safety profile of the drug, it is recommended as a “https://ambienpro.com” drug in the treatment of chronic or newly diagnosed insomnia (with the absence of obvious contraindications in the patient).