While Star Trek: Discovery was initially keen to differentiate itself from previous Star Trek series, recent episodes have been more customary. And it’s fun to see how Discovery does certain types of story we’re very familiar with, like last week’s knockabout time-loop adventure (with a touch of darkness). This week, we got the show’s first ‘away mission’; a group of characters beamed down to a strange planet’s surface, only to encounter an unusual alien intelligence. It was bread-and-butter Trek, and did a decent job with some reheated ideas.

The hour opened with an impressive action sequence where the USS Gagarin was under attack from Klingon ships, until the USS Discovery ‘spore jumped’ into the melee to help fight off the enemy. It was going quite well, too, until it wasn’t. The Gagarin was destroyed with all lives lost, forcing the Discovery to jump to safety and grieve another downed Federation ship. The effects were great to look at, but more importantly it reminded you that a serious war’s being fought as the backdrop to this show. In some ways I wish it wasn’t, because almost every story has to tie into the war effort somehow, which gives Discovery some narrative restrictions. On some level I just want Discovery to jump around the universe, maybe even at random, which would mean the show could do the Alpha Quadrant-focused stories popular in Star Trek: The Next Generation while also visiting more far-flung places like Star Trek: Voyager. 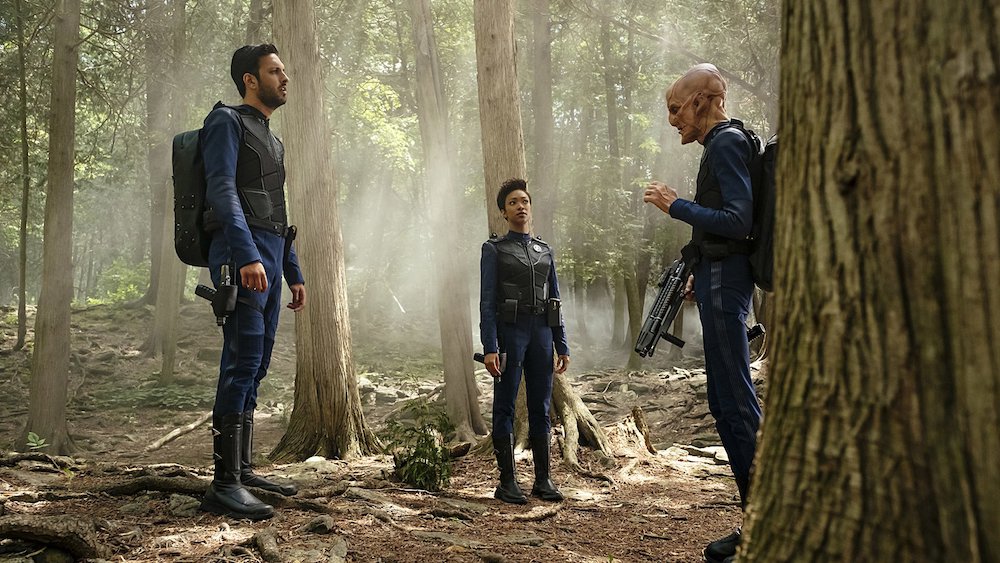 “Si Vis Pacem, Para Bellum” (or “if you want peace, prepare for war”) truly got underway once Burnham (Sonequa Martin-Green), Saru (Doug Jones), and Lt. Tyler (Shazad Latif) beamed down to the alien world of Pahvo — nicely colour tinted in post-production to give the location an otherworldly feel with blue leaves and azure sky. It makes a change from suspending your disbelief that every alien planet looks like rural California, or that most extra-terrestrial rocks resemble lumps of polystyrene. The away team were there to investigate Pahvo’s strange geology, as nature vibrates to a frequency that could be useful as a means to detect invisible Klingon ships. The term “cloaked” hasn’t entered Federation parlance, just yet. Ditto the term ‘Prime Direction’, which governs how they’re allowed to interact with alien life.

The dilemma this week was how Saru reacted to the inhabitants of Pahvo, revealed as being a kind of bioluminescent gas. In a nod to Gaia Theory (or, ahem, James Cameron’s Avatar), it seems the planet is a single organism living in perfect harmony. Saru, a species inclined to be fearful of predators, with heightened senses that meant the planet’s vibrations are uncomfortable, later became “infected” by the aliens. The effect was Saru developed a deep appreciation for the Pahvo’s existence, and became obsessed with promoting their peaceful way of life and trying to convince Burnham and Tyler to ditch their mission and instead live here forever. 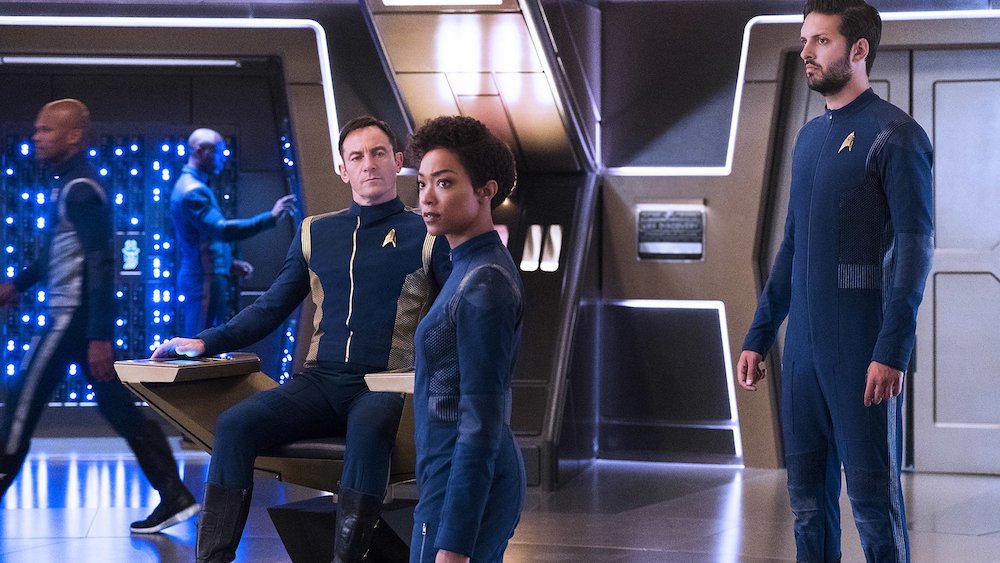 It felt likely that Saru has been “possessed” by the Pahvo creatures, who may actually have malicious intentions, but I enjoyed how the script by Kirsten Beyer (an author of Star Trek: Voyager novels) went in the other direction. Saru’s behaviour wasn’t in character, as he destroyed their communicators and violently tried to stop Burnham sending a distress signal using one of the planet’s natural “antennas”, but he was compos mentis. He was simply so overwhelmed by the feelings the Pahvo ‘swarm’ gave him, as he’s never felt unafraid in his life before, that he was determined to keep that feeling alive and wanted everyone else to share in it. That made for a good twist on our expectations.

Elsewhere, there were two subplots this week. The main one concerned L’Rell (Mary Chieffo) and her ongoing machinations in Klingon society, trying to get onside with Kol (Kenneth Mitchell) now that he’s amassing widespread support by rewarding his followers with T’Kuvma’s cloaking technology. L’Rell is keen to impress him with her skills as an interrogator, and it was interesting to see she’s been entrusted with the torture of captured Admiral Cornwell (Jayne Brook). I was also very excited by the development of L’Rell deciding to defect to the Federation and help Cornwell escape, but it ultimately just kind of… wilted. 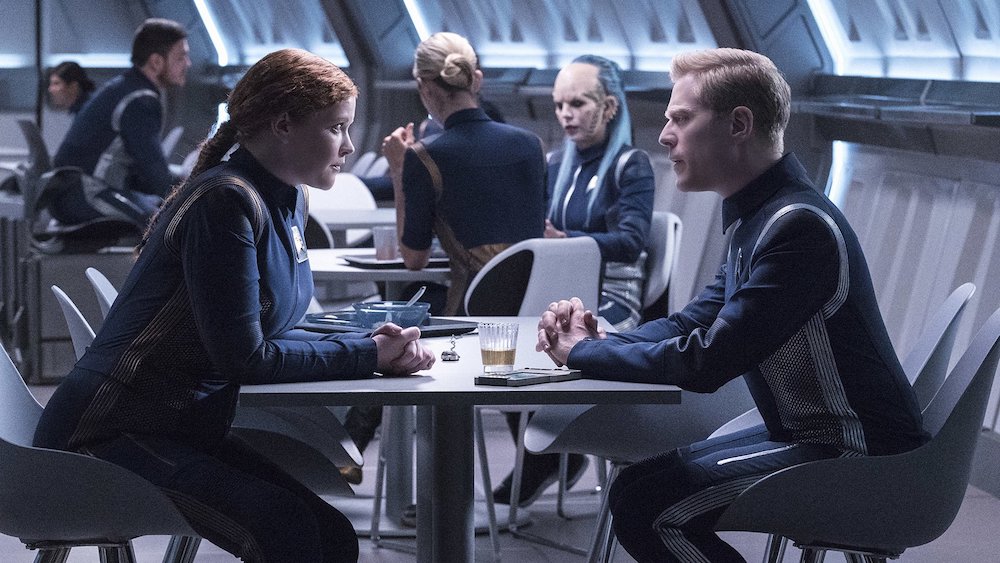 I think we need more clarity in the Klingon storyline. It’s very unclear what L’Rell truly wants, or how she’s going about it. And where’s her “boyfriend” Voq? There’s a popular fan-theory that Lt. Tyler is actually Voq, using some kind of disguise, as he’s smuggled himself aboard Discovery as a Klingon mole who’s going to prove his superiority over Kol. It sounds a bit silly, but it would make sense of the confusion about who Latif is playing on the show (it was announced he was playing a Klingon), and it would also explain why we haven’t seen Voq ever since Tyler was introduced.

It’s just an odd decision to make, because it’s going to deny us a good character in Tyler if he’s just an illusion, and surely the writers knew the audience are going to wonder where Voq suddenly vanished to. He was a prominent part of the two-part premiere and immediate episodes that follows, then just disappeared from the story, while his closest ally L’Rell has maintained her visibility on the show.

It’s even claimed that Javid Iqbal (who plays Voq) doesn’t actually exist, as his IMDb profile page is suspiciously empty and there are no pictures anywhere of the actor without his make-up on. Is Shazad Latif actually playing Voq under that white wrinkled forehead? 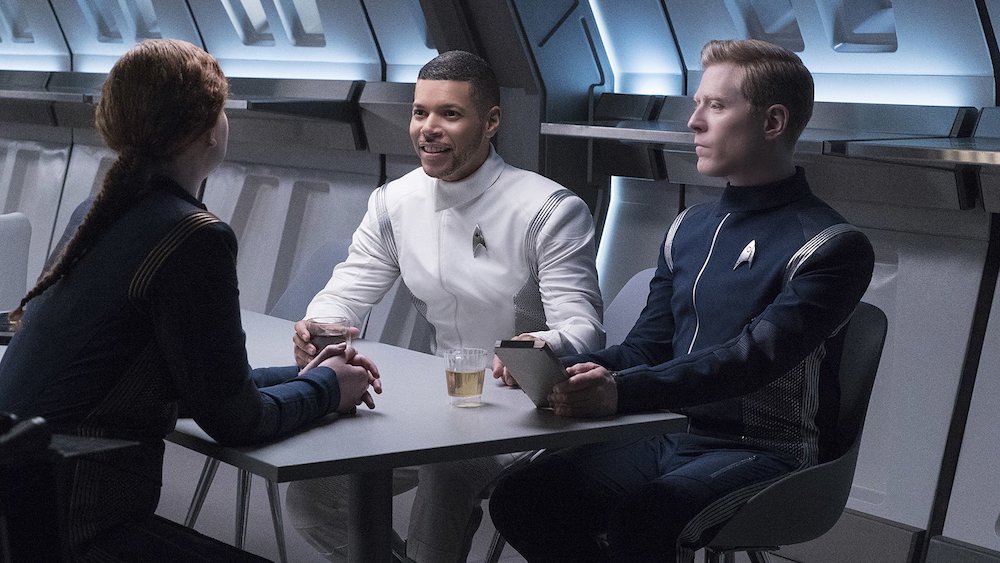 Finally, there was some insight into what’s happening with Stamets (Anthony Rapp) through his continued role as part of the spore-drive. It’s clearly not good for his mental state, as he disembarked the chamber this week and mistook Tilly (Mary Wiseman) for “the captain”. He’s either seeing the future (as it’s been mentioned Tilly wants to become a captain one day), or more likely the “Mirror Universe” (where Mirror Tilly’s clearly a Starfleet officer). My money’s on the latter, mainly because of the ‘mirror shot’ awhile ago, where Stamets’s reflection moved independently of him, and the rumour that Discovery’s first season is building towards a Mirror Universe episode. Damn rumours, they ruin everything… but it’s so hard to go dark online.

“Si Vis Pacem, Para Bellum” was a good hour of Trek, again showing that Discovery can deliver the kind of episodes many expect of the brand. It wasn’t anything that really caught my imagination, but there were some nice twists during the storyline on Pahvo, and Doug Jones got a rare chance to flex his acting muscles and not just his performance skills. The Klingon subplot was a little messier, and not entirely satisfying, but everything setup next week’s mid-season finale very well… with the Pahvo inviting Kol’s “Ship of the Dead” into orbit, alongside Discovery, naively expecting them to put their differences aside and give peace a chance.