There’s a long tradition of stories about groups of people being hunted and killed, one by one, by a mystery assailant (most owing a debt to Agatha Christie’s 1939 novel And Then There Were None, maybe a few to 1987’s Predator). There’s an even longer real-life tradition of soon-to-be-married men being thrown raucous parties, to celebrate their final days of bachelordom. Combine the two and you have BBC2’s three-part comedy-drama Stag, about a group of Englishmen on a weekend trip of drinking and deer-stalking in the Scottish Highlands, only to find themselves as the prey. 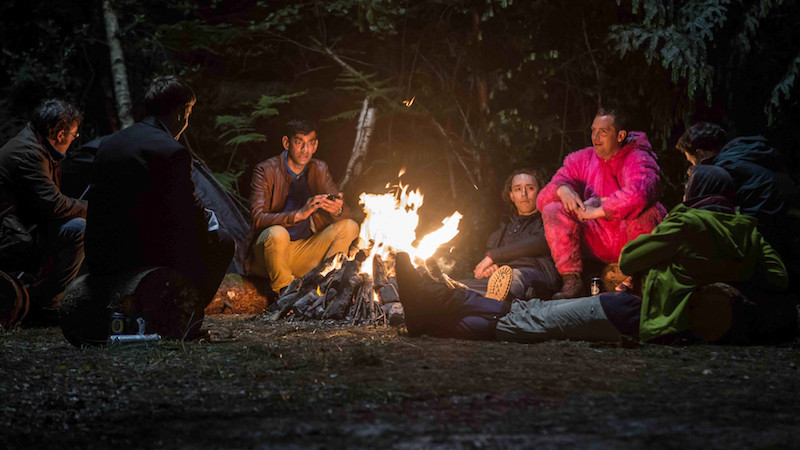 The best part of Stag’s premiere was during the careful build-up to the first kill, as the script by The Wrong Mans’ Jim Field Smith (also directing) and George Kay (My Mad Fat Diary) expertly introduced its loud-mouthed characters and conveyed a keen sense of how awful these stag do’s can be—especially if, like Ian, you only have a tangential relationship to any of the revellers, and find alcohol-fuelled boisterousness off-putting. Simply watching poor Ian try to hold his own against a table of drunks, succumbing to peer pressure, was undoubtedly the most enjoyable part of Stag’s first hour.

Unfortunately, that’s not a good sign for a show that has very different ambitions. Once the guys traverse a flooded river to reach their planned hunting ground—driven to the remote location by a brusque gamekeeper (James Cosmo)—their late-night camp fire chit-chat is rudely interrupted by one of their number receiving a harpoon bolt through his chest, before being reeled backwards into the foliage! Oddly, while this turning point completely changes the nature of what we’re seeing (switching to awkward human drama to full-blown Severance-style antics), it’s at this moment Stag feels like it’s on weaker ground.

I think a key reason why my interest dropped is because so few of the characters behave realistically with regard to anything happening. Witnessing your friend being murdered is a frightening thing, but the show has difficulty treating this situation as seriously as it needed to. While I understand Stag is foremost a comedy that deserves some leeway with realism, you need some semblance of reality to buy into its macabre side. Doing so would ensure the flashes of comedy become all the funnier as pressure release valves. 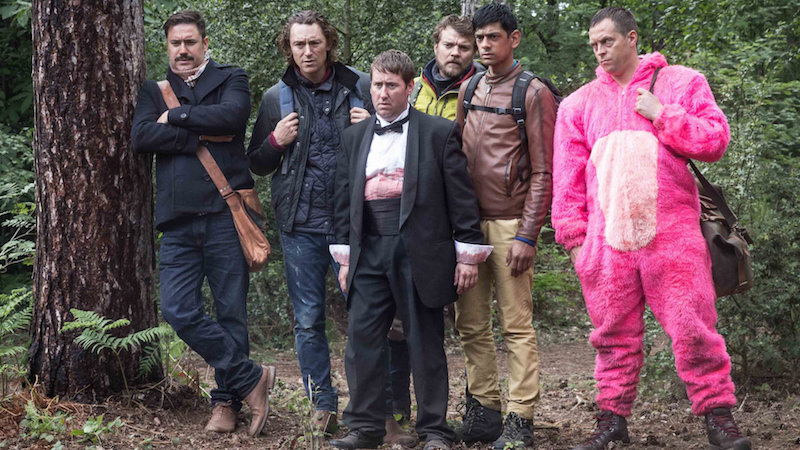 However, it’s not long before Stag’s offed its two most recognisable cast members (trying not to spoil things), and it becomes increasingly apparent how silly everything is. A long pair of dismembered legs are stuffed into a tiny rucksack (previously owned by Mary Poppins, it seems); a man falls into a pit and requires rescue using interlinked trouser belts (when he’s clearly within arm’s reach of the surface); one guy decides to waste time by taking a running jump onto a boat that’s only a yard from the jetty; then the same idiot pointlessly blows a whistle when he’s snared by the unseen killer (alerting who, exactly, considering everyone on the boat could see what’s happening?); and another walks into a sniper’s crosshairs, despite two of his buddies clearly shouting for him to turn back.

I’ve heard it argued that Stag’s stupider moments are there to highlight the idiocy of the characters, or are sight gags in themselves. I see the argument, but struggle to agree with it. To me, it just seems like weak writing; set pieces that don’t make spatial sense once you’re filming them on location with limited resources and time. You have to be one step ahead of the audience at all times with thrillers, and too often Stag falls short—like a moment involving a bothy’s gas leak and a cigarette lighter, which is so signposted it turns a potentially hilarious shock into an agonising wait for the punchline.

Matters improved for the second episode, which split the city bankers up and thus added some variety to the narrative—from TV exec Cosmo forming a bond with the spooky gamekeeper over a missing dog, to the unexpected arrival of a macho Aussie called Christoph (Christiaan Van Vuuren), whose annoyance over being excluded from the weekend trip spilled over into drug-taking and psychotic behaviour. It’s during episode 2 that an inescapable truth of Stag starts to take form, however: it isn’t particularly funny. That’s not a total disaster for the show, as there were still amusing moments and the key mystery of who’s stalking them, and why, held things together nicely. We also started to learn more about the folk at the heart of this story—who are all wealthy London bankers, with the exception of Ian—as there’s talk of previous stag weekends gone bad, and an investment scheme in Guernsey everyone’s part of. It also becomes clearer that beneath the bravado, most are hiding insecurities and their apparent masculinity is just keeping up appearances. 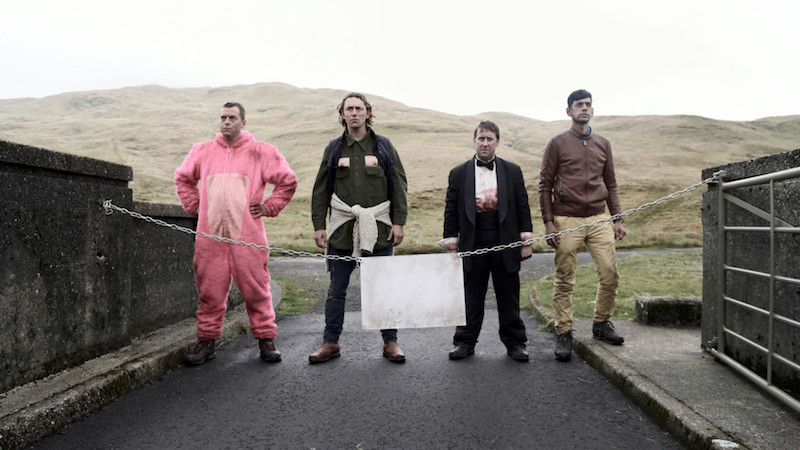 The best hour was, fortunately, the last. A mystery is only as good as its big reveal, and Stag at least managed to stick the landing in an entertaining way. The explanation for who’s on a murderous rampage, and more importantly why, is very obvious in retrospect (but then what isn’t, after the fact?), but the script managed to keep a sense of surprise thanks to clever misdirection. My only real complaint is that specifics got a little muddy regarding people’s identity, so perhaps the script could have been a little clearer about people’s connections, but for the most part it worked well. The concluding part is also notable for being the least funny of the three instalments—in fact, in one sequence it becomes downright grim—and this actually worked in its favour.

Maybe Stag should have been more weighted towards chills and kills, and less on shoehorning average jokes into scenes. The final hour didn’t overcome the show’s core problems, alas: there’s a sequence involving the traversing of a booby-trapped dam that had me wailing in frustration (as the survivors make the stupid decision to turn back, when avoiding its land mines is clearly a cinch), and a lot hinges on a particular character being unusually soft-hearted/dumb. A final surprise involving someone’s return also left me nonplussed, considering its implications, and I still don’t think it makes much sense.

Despite its creative shortcomings, Stag proved to be an enjoyable three-part drama for the BBC, and one I didn’t regret watching thanks to the ending. It would have made a better movie, however—mainly because I think the script could’ve done with the inevitable extra attention, and condensing three hours into a quicker 90-minutes would have eased some of my issues. Still, Stag represents exactly the sort of high-concept stuff British drama tends to shy away from—so thank heavens the Beeb commissioned something that isn’t a medical series, cop show, or period drama, but something that took risks with concept and tone. It’s just a shame some of them didn’t quite land.Researchers believe that the local application of antibioticspro.com reduces the likelihood of development of bacterial resistance (the bacteria becomes resistant to drugs).