This week’s episode mostly takes a break from the season’s various subplots for American Horror Story’s version of a bottle episode. Halloween is, naturally, always a big deal on this show, and I was looking forward to this one after last week’s more promising episode. But I had a bad feeling from the opening scene, when Richard Ramirez (Anthony Ruivivar), aka ‘The Night Stalker’, checked into the hotel. After bantering with Liz Taylor (Denis O’Hare) about looking forward to when the still-alive Charles Manson can check in, Ramirez sneaks into one of the rooms and, as he pursues one of his victims down the hallway, bumps into March, who says something like, “Ricky, dear boy! So glad you could join our little murder soiree! Be a pal and bump off this dame tout suite, won’t you?” Ramirez—who, in real life, was convicted of multiple murders and sexual assaults—is far from the only notorious guest at March’s party, which Detective John Lowe (Wes Bentley) is unwittingly invited to. 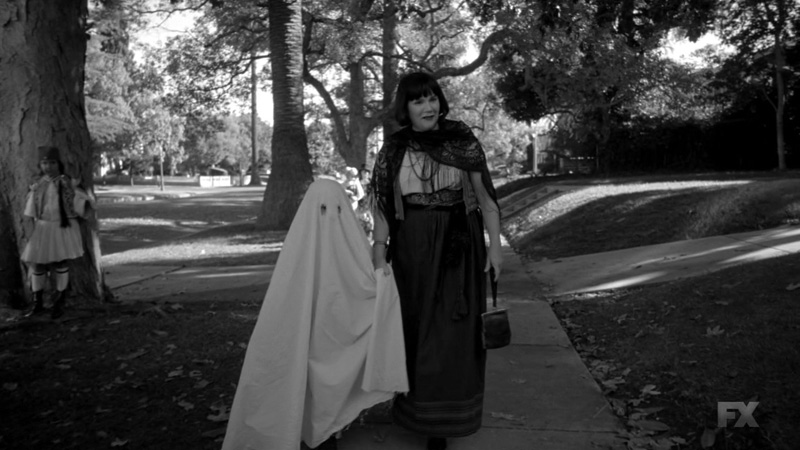 Later in the episode, as Lowe falls off the wagon at the hotel’s bar, we see a character from behind, dancing her way into the scene to Natalie Merchant’s “Carnival.” My first thought was, “Hey, cool soundtrack choice,” followed by, “Oh hey, Lily Rabe,” followed by “Is she playing… oh. Oh no.” Lowe is greeted by none other than Aileen Wuornos, and while Rabe is always a welcome addition to the show, she deserves better than playing a spook show imitation of Charlize Theron in Monster. I’ll admit that I pretty much checked out of the episode at this point, though nothing that happened afterwards could’ve turned me around on it even if I wasn’t completely appalled at this point. It’s redundant to criticise American Horror Story for being distasteful, and I haven’t heard or read anyone else complaining about the episode, perhaps I just wasn’t in the right mood for it.

Here’s the thing: a while back, I had a very tangential connection to a real-life homicide case. I don’t mean to overstate my involvement in what was a really difficult time for someone I care about and an entire community that was affected by it. But it really coloured my feelings about any sort of celebrity appeal, ironic or otherwise, given to real-life murderers. It’s one thing if the show decides to include a long-deceased real-life killer like Lizzie Borden, or even—as it did in season one—Richard Speck, whose victims’ loved ones have mostly passed on at this point. But including relatively recent real-life killers like Jeffrey Dahmer and John Wayne Gacy at March’s party feels scuzzy in the same way that season one’s unsubtle evocations of Columbine did. And this is especially true of Wuornos; a prostitute who claimed that her first victim violently raped her and who, by all accounts, was a deeply mentally ill woman who’d lived through repeated, horrifying abuse since she was a child. AHS plays lip service to this, and Rabe clearly tries her best to humanise her, but mostly it treats a sad, broken, real person like she’s freaking Beetlejuice. 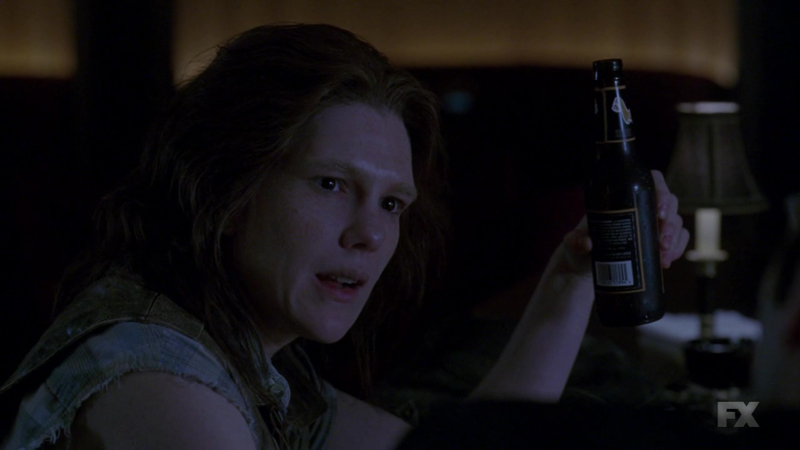 Maybe I’m overthinking this, and using these characters is no more or less distasteful than anything else this show does on a regular basis. And I’ll admit that I got a few chuckles out of John Carroll Lynch playing Gacy with a sort of vulnerable pride, especially as The Zodiac Killer was sitting right across from Lynch. Maybe I’d feel differently about the episode if it had simply been more clever about its use of real-life killers, but after Lowe is tied up and forced to watch, they basically just sit around while March toasts their infamy, then they kill a couple of people together while cracking jokes about young boys being Dahmer’s type (wocka wocka wocka!). It’s like a murder version of that fake Nighthawks painting with James Dean, Elvis, and Marilyn Monroe. It’s dumb.

I really wanted to like this episode, especially as it was written by onetime Sisters star Jennifer Salt, who’s responsible for some of the show’s stronger episodes. Unfortunately, the murder party puts most of the other characters and plotlines on hold—Angela Bassett and Kathy Bates, who were the highlights of last week’s episode, were completely absent. We do get some backstory for Hazel the maid (Mare Winningham), whose own son was abducted and murdered on Halloween 90 years ago. And the episode ends on a neat cliffhanger, as Alex (Chloë Sevigny), who realises there’s something very wrong with her long-missing son after he snacks on the family dog, lets the Countess (Lady Gaga) turn her in order to stay close to their son. Here’s hoping the show rights itself after this week’s detour, because it can’t get worse than this, right?