Well, if there was any doubt at the end of the previous episode in regards to which way Dr. Thackery (Clive Owen) was going to go, the opening moments of “The Best With the Best to Get the Best” dispel it instantly. Thack is back on the crack, and prostitute Kate has a lot to answer for. While Thackery reverts to form, Bertie (Michael Angarano) has taken up a position with Dr. Zinberg at Mount Sinai hospital, which couldn’t be further from the Knickerbocker if it tried, and the contrasts go some way to putting Thack and Edwards’ (Andre Holland) medical bravado and surgical recklessness into context.

Where Mt. Sinai has structured meetings and strict rules about experimentation, the men of the Knick tend to dive straight in. While Bertie must use mice, rats, cats, dogs and pigs before any human testing can begin, Thack and Edwards skip straight to the pig in their efforts to cure the returning Abigail (so memorable last year for the horrors of her reconstructive nose/arm surgery) of syphilis. If the Knick is a circus, it’s a George Irvine; Mt. Sinai is Cirque de Soleil. 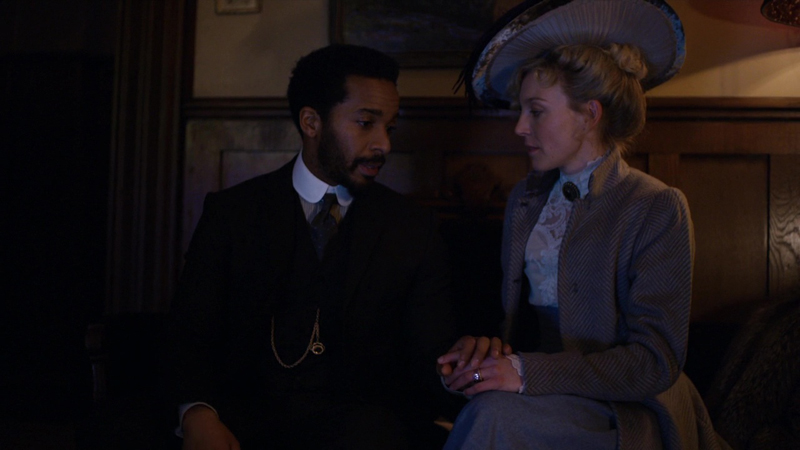 The episode’s title, meanwhile, comes from a discussion that Gallinger (Eric Johnson) witnesses at his school reunion, in which some of his former classmates discuss the benefits of eugenics—selective breeding and the extinguishing of perceived lesser genetic lines—and it’s symptomatic of the many abuses of power, and the many discussions of oppressed people and races that take place throughout the episode.

Gallinger’s old friends are the established upper-class, and they don’t even blink about using their position to eliminate those beneath them. They may see it as improving the population—to bring everyone up to their level—but it’s frightening to see such a casual conversation about something that would one day find purchase in the form of the holocaust taking place over drinks and cigars. Gallinger, for his part, seems uncomfortable by the notion. It’s not that he isn’t still a racist—he continues to butt heads with Edwards—but more that his own position in that established upper-class seems far more precarious. At work, he’s been usurped by Edwards, and while his troubled wife Eleanor (Maya Kazan, giving a tragic, creepy and vulnerable performance) may have returned home, some new dentures are hardly proving a quick fix. How can a man of standing be the best of the best when his household is home to an insane and damaged woman, and at work he languishes under the yoke of a black man and a drug addict? 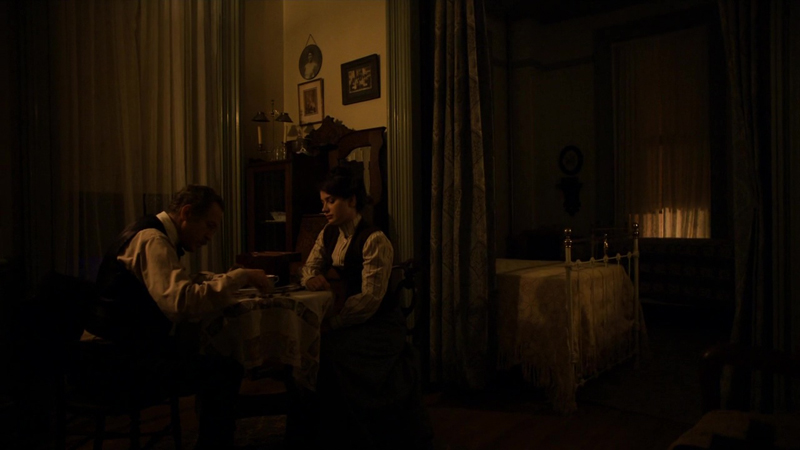 The episode’s other prime example of abuse of power comes rather too literally for poor Lucy (Eve Hewson), who finds herself on the wrong end of her father’s belt. Lucy—and, indeed Eve Hewson—are best served when the character is more spiky than benign. Thack’s rejection has made her bitter, and in turning down Robertson’s advances, she’s instantly a more engaging character. With her preacher father in town, she even plucks up the courage to confess her sins to him in public, and it ought to be a turning point for her. And it may be, but unfortunately not in the manner we might have hoped. While A.D’s (Stephen Spinella) rhetoric about the freeing power of confession is all well and good for his congregation, apparently that same forgiveness doesn’t apply to his own daughter, and the ensuing tirade of abuse he unleashes on Lucy is horrific. In fact, with the charisma and power of Spinella’s performance, it feels like it’s the words A.D spits that cut deeper than the lashes. It’s normally only in surgery scenes that The Knick becomes difficult to watch, but this was rough.

Sister Harriet (Cara Seymour), too, falls foul of a man who has power over her, as the judge she draws for her case is a devout and bigoted man, who’s long since decided on her guilt, and his distaste of immigrants (in this case an Irish Catholic, but the plight of immigrants at large is a timely and resonant thread running throughout the series). Without the Showalter money to help fund her lawyer, it’s difficult to see how Harriet will escape her predicament. (Could Cleary enact a jailbreak?) 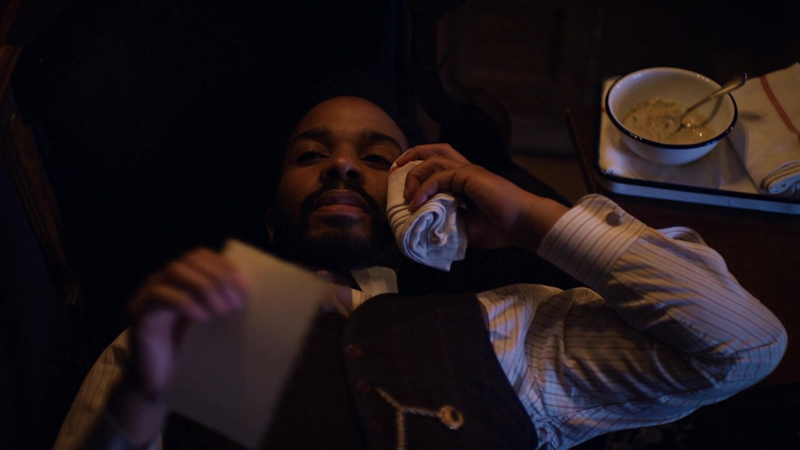 Speaking of Cleary (Chris Sullivan), he abuses his position at the hospital to secure drugs to help fix his underground fights, but ends up botching the dose and killing a man, while Barrow (Jeremy Bobb) abuses his to continue his various money-making schemes. And, in a rare moment of role-reversal, a character who seems to have no power—Barrow’s favourite whore Junia—manages to wrap the pitiable man around her little finger. He falls for her empty words hook, line and sinker, and it’s almost enough to make you feel sorry for the poor sap.

And there are, of course, more masterful moments from Steven Soderbergh behind the camera; the most impressive of which involves Bertie’s date to Huber’s Palace, a sort of circus-cum-bazaar. Bertie has escaped the circus of the Knick, but is instantly drawn to a different class of chaos—both in Huber’s and in his choice of date—and this is a strong introduction for Arielle Goldman’s Genevive. An unbroken two-and-a-half minute shot tracks them as they wander this curious environment, in a scene that features so many extras and elaborate set-dressings that it boggles the mind. Unless this is to be a location that the pair returns to, it seems like an awful lot of effort to go into one scene – but that’s not a complaint! That attention to detail and the commitment to depicting the era in technically brilliant and innovative ways is one of The Knick’s selling points. 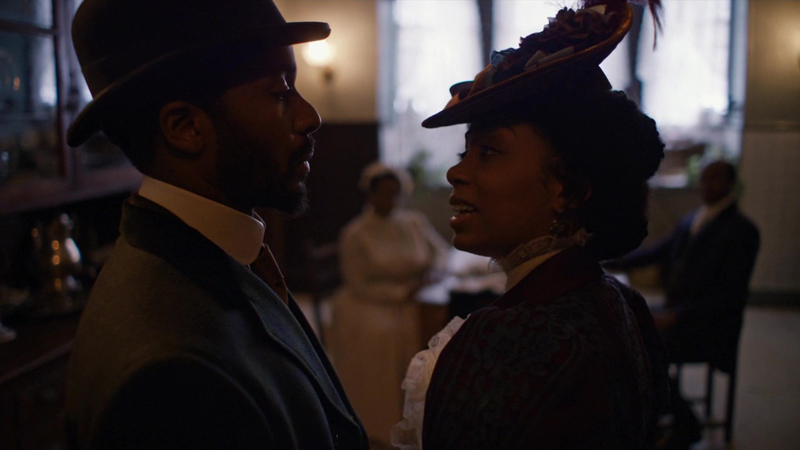 There are other impressively staged scenes, too, with Gallinger suffering the sneers and derision of his former classmates as the camera pulls that classic Knick trick of remaining behind him, so we’re placed firmly in his shoes, forced to stare out at their smug faces. Cornelia (Juliet Rylance) and Phillip’s (Tom Lipinsky) love scene is even better, initially shot from the top corner of the room—almost resembling CCTV footage—it’s an angle that takes in the large size of the room, and emphasises the empty space and the distance between the pair. Once they make love, the camera is instantly in among them, all extreme close-ups; they fill the screen.

And the episode ends on something of a bombshell, as it’s revealed that Algie has actually been married this whole time! His wife—a British women named Opal (Zaraah Abrahams)—already seems to be a slippery type, and doubtless Algie had his reasons for trying to leave her far behind. What initially feels like a lazy way to introduce a new character—especially with Edwards’ parents’ familiarity with her—is eventually revealed to have more to it. They’re as shocked as we are about their son’s deceit; they just had the decency to pretend for Opal’s sake.

It’s a shame that Opal’s arrival places another obstacle between Algie and Cornelia—their chemistry is tremendous, and Juliet Rylance’s delivery of “when?”, when he tells her “not here, not now” was electric—but Opal’s appearance is certainly an intriguing turn of events, and proof that The Knick has plenty of surprises up its sleeve.