The fifth season of BoJack Horseman finds the titular washed-up actor on the road to recovery, of sorts. He’s working again, on a moody crime drama called Philbert (a perfect satire of prestige cable dramas), he’s trying to drink less, and attempting to be a better person. But the road he’s on is long and full of setbacks, and it’s to the show’s credit that it doesn’t ever let BoJack (Will Arnett) off the hook. Nothing about the process he’s going through is easy. There may be evidence of growth for BoJack and other characters in season 5, but it’s complicated, messy, and feels very real. This series is, as ever, heavy and dark while also being frequently hilarious.

Raphael Bob-Waksberg’s writing remains as incisive and powerful as we’ve come to expect, as BoJack Horseman wrestles with difficult themes like feeling a sense of belonging, managing addiction, and dealing with pain. One early episode focuses on Diane going to Vietnam to reconnect with her past, but only feeling more lost and struggling with her identity as a Vietnamese-American. Princess Carolyn’s (Amy Sedaris) quest to adopt a baby takes her home to North Carolina, and sees her confront her own past trauma. Later in the season, a whole episode is devoted to BoJack giving a lengthy eulogy, while another instalment shows us his downward spiral after he runs out of pain medication. 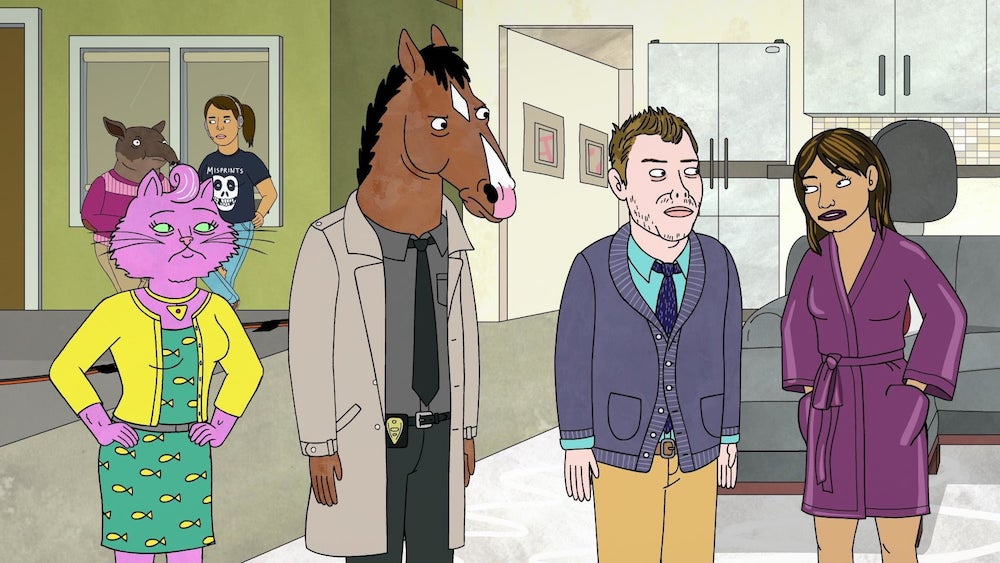 Season 5 tells us there’s a way for BoJack to heal and deal with his issues, but it won’t ever be easy or simple. Anyone expecting a shortcut or time-jump in the narrative will be disappointed to find this animation appears committed to taking us through every step of BoJack’s long journey. He tries to manage his recovery on his own and the way that he struggles is inevitable. The shows takes the audience to numerous dark and uncomfortable places. BoJack is not a good person; he’s made too many mistakes to count and has hurt a lot of people along the way. But is he a bad person? Things are more nuanced than that. It’s great to see that the show remains as considered and deep a character study as it has been in its previous seasons. 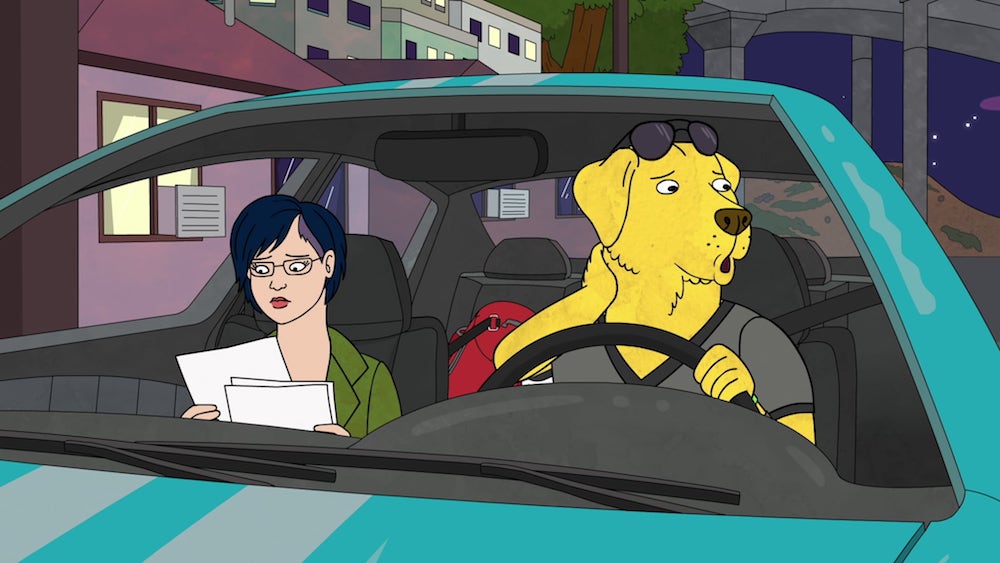 It would be easy for BoJack Horseman to simply sit back and deliver as a comedy, as it’s already one of the funniest shows on TV. That it’s exceptionally humorous and impactful is what makes it so special. It’s impressive to see just how much is packed into each and every episode. Every joke works magnificently, with topical satire that’s sharp and witty. The show deals with how quickly men in the public eye are forgiven for terrible behaviour in both upsetting and hilarious ways, while also powerfully mocking the modern media landscape, to deliver the kind of uproarious farce we’d expect with the shenanigans Todd (Aaron Paul) gets himself into. 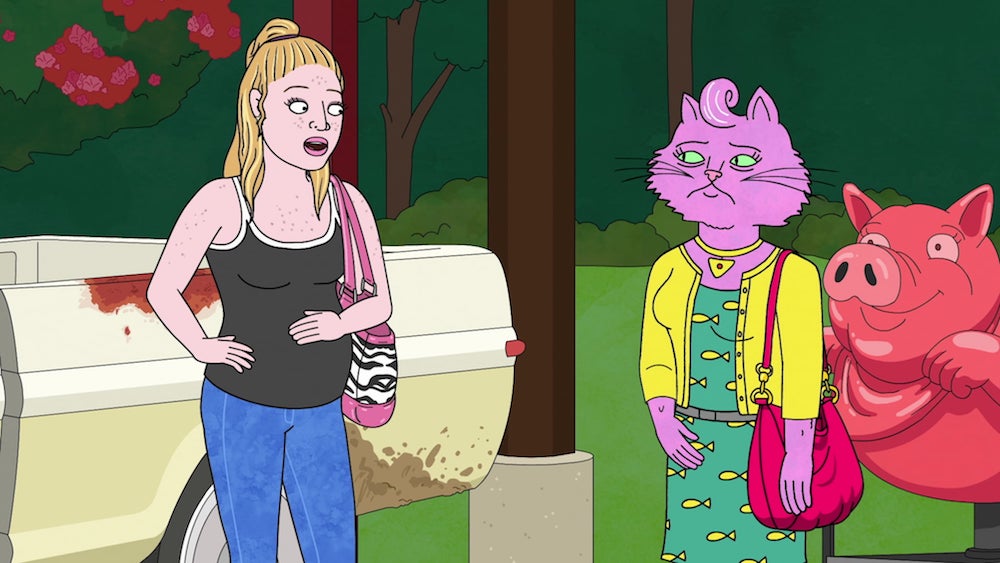 It’s almost an unwritten rule that every great show experiences a slump at some point, but BoJack is managing to sustain and even build on the quality of its drama and comedy with each passing year. There’s no season one could point to as being widely considered the best of the series, and that demonstrates how confident Bob-Waksberg’s vision for the show is. It’s always been designed as an honest and unflinching look at mental illness, depression, and anxiety… while using animal puns, absurdist jokes, and a lot of showbiz satire to balance out the darkness. It’s worked well since the first season and continues to be an excellent show. 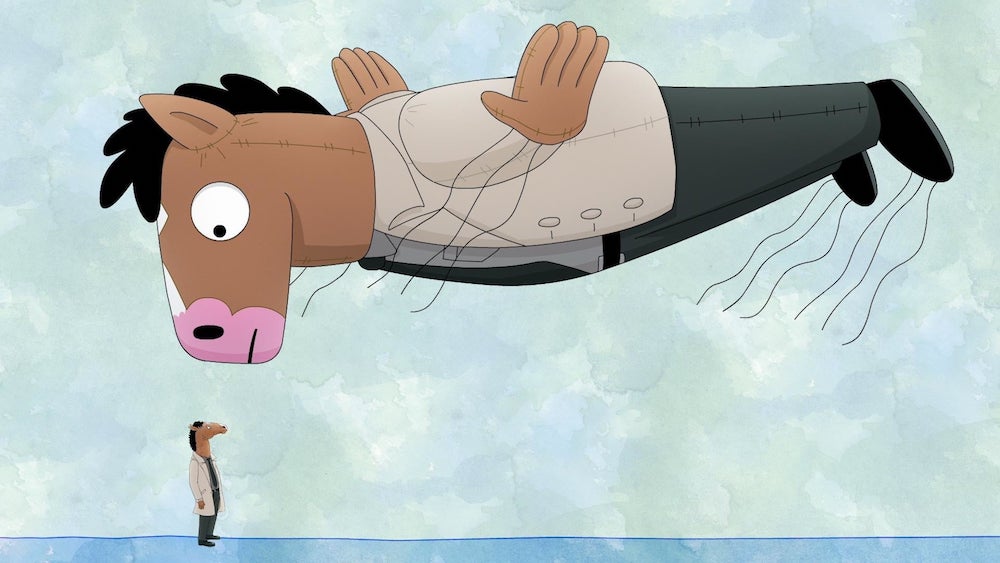 One way BoJack Horseman has changed is how the focus is not always on BoJack. This is much more of an ensemble show in its fifth season than it was when it began, and it’s great to see it dig into its supporting characters much more. It feels like the show is exploring pain, sadness and coping mechanisms through Diane, Princess Carolyn, and Mr Peanutbutter (Paul F Tompkins) as much as it is through its lead character. In this season, the flashbacks to Mr Peanutbutter’s previous failed marriages and Princess Carolyn’s difficult childhood are particularly memorable.

As in previous seasons, it’s great to watch BoJack Horseman pack a lot of tough emotional material into each episode. It does this while also delivering sharp dialogue and brilliant humour. The show is also continuing to play around with experimental episode formats and concepts very successfully. BoJack is pushing its characters down the road to recovery while not letting any of them, especially BoJack himself, have it easy. This makes it as emotional as it is entertaining to watch, and it remains one of the deepest and nuanced character studies that you’ll find on the small screen.