There are horror pioneers, and then there’s Herschell Gordon Lewis. The late “Godfather of Gore” was, in his own way, the inventor of modern horror movies. Morbid, excessive, and utterly fascinated with bodily decay and dismemberment, each successive film H.G Lewis made was an attempt to one-up the last in terms of organs removed and general bloodshed. While it’s impossible to ignore the sheer low-budget goofiness of it all (and most of the resulting humour is without a doubt intentional), the aspect that stands out most in his films is how genuinely transgressive they were for the era in which they were released. Lewis didn’t elevate the trashier tendencies of horror, he simply embraced them in a way no other filmmaker at the time was brave enough to do, resulting in movies that still manage to disgust audiences today.

Although Blood Feast (1963), his viscera-heavy response to Alfred Hitchcock’s Psycho (1960) is arguably his best-known film, Color Me Blood Red is the one that’s most emblematic of his style. Like Blood Feast before it, Color Me Blood Red is a naked rip-off of a more well-known film—in this case, Roger Corman’s A Bucket of Blood (1959). Corman’s film is heavy on camp but light on onscreen bloodshed, an error that Lewis was more than eager to correct in his film. 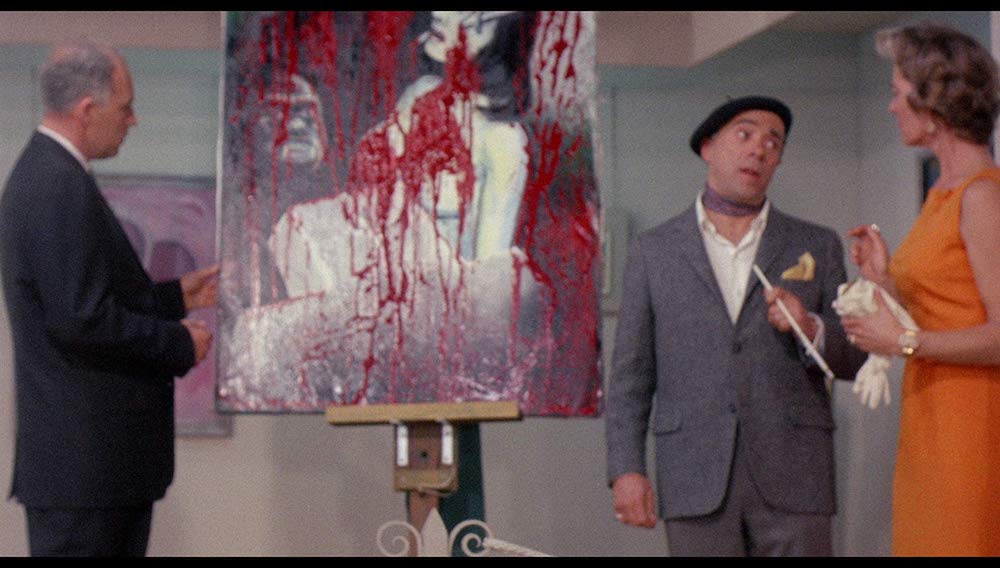 Otherwise, the films don’t diverge all that much plot-wise. Color Me Blood Red follows struggling artist Adam Sorg, a talented painter held back by his supposedly amateurish use of colour. When his girlfriend accidentally cuts her finger and bleeds on one of his works-in-progress, Sorg discovers the colour he’s been searching for his entire artistic career: the crimson hue of human blood.

There’s no need to explain where that revelation leads. Sorg quickly resorts to (murderous) new methods to obtain his new signature shade of red. As blood-drained corpses begin to mysteriously pile up, Sorg’s paintings become overnight sensations. With each additional murder, Sorg loses just a little bit more of his sanity and grows angrier and angrier at the critics who wronged him in the past. Rest assured, it doesn’t end well for anyone. 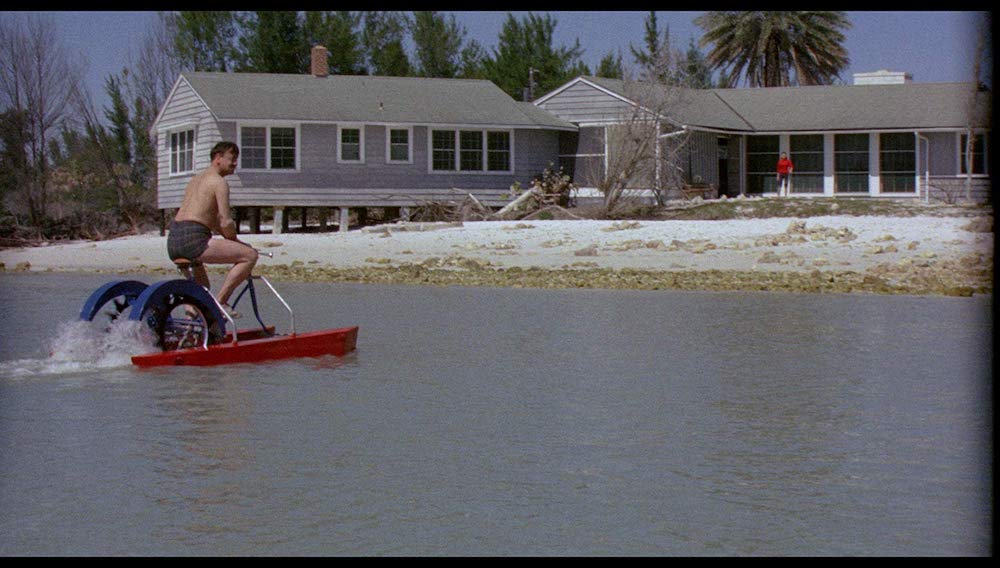 The best H.G Lewis films are the ones in which he dives headfirst into his skeletal plots’ most extreme and tasteless possibilities, and Color Me Blood Red is no exception. What the film lacks in quantity of death scenes it more than makes up for in quality, as the violence is consistently cartoonish and nauseating in the most wonderful way imaginable. Look no further than the no-holds-barred disembowelment scene or, if that doesn’t satisfy you, the aquatic impalement with a spear will do the trick. For a 54-year-old horror film, this one still packs a hell of a punch!

Of course, it’s not scary now and I doubt it ever really was, even back in the mid-1960s. As is always the case with Lewis’s work, this is a film more interested in inciting gasps and chuckles rather than sending a shiver down your spine. It’s also not particularly set on provoking any kind of discussion or deeper thought, for that matter. Lewis knew his work was in poor taste—hell, he practically invented poor taste—and his role throughout his oeuvre has always been that of a showman, not an artist. He’s an entertainer first and foremost, and all this crassness is in the name of showing his audience a good, lighthearted time. Macabre as Color Me Blood Red may be, it’s never dark or disturbing, even as it leans into images of unprecedented brutality and grotesqueness. 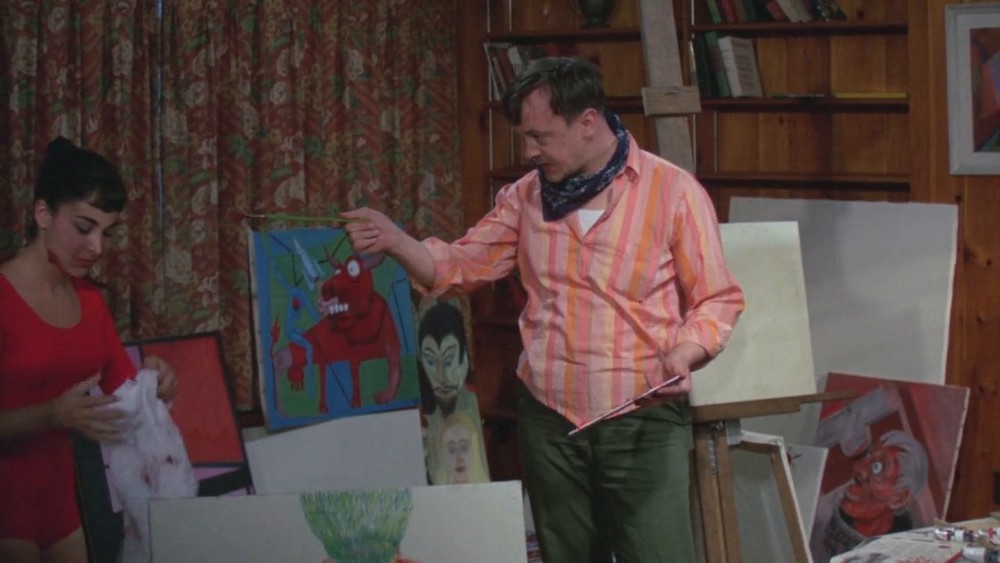 The colour palette, more than anything else, confirms that Lewis wasn’t taking himself very seriously. He always had a penchant for lurid colours in his work, and in Color Me Blood Red he fills the screen with pastels and deep reds to take your breath away. Naturally, blood red is the colour du jour, but there’s more to the film than that: hot pink swimsuits and bright blue button-ups flood every frame, providing a sharp contrast to the gallons upon gallons of vital fluid being spilt.

The amateurish, DIY impression of the film is half the charm. Nobody in a Herschell Gordon Lewis project could act to save their lives, but it’s all the better that they can’t. Color Me Blood Red is, like almost every one of his films, a classic of campy horror, and an ode to the simple pleasure of seeing people’s insides brought outside in a scary movie. He’s the Andy Warhol of trashy horror, turning threadbare production values and hokey dialogue into an art form that put just about every contemporary horror filmmaker to shame. It may not be Gone With the Wind (1939), but I dare you to find a series of mutilations more likely to put a smile on your face. 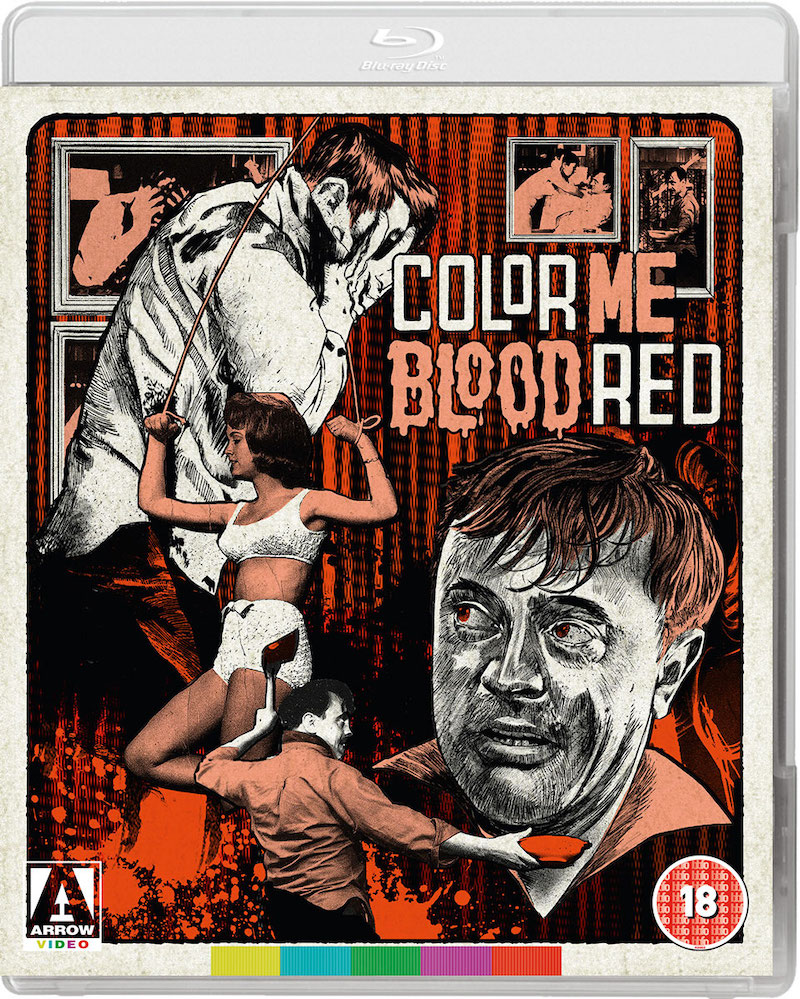