After Night of the Living Dead (1969), popularity of the zombie genre grew steadily, shaped and defined by George A Romero’s first ‘Of the Dead’ trilogy, which continued with Dawn of the Dead (1978) and Day of the Dead (1985). Zombies were created by contagion, germ warfare, a rogue virus. It was a genre of body-horror, of hypochondriasis, and became the dominant idea of what a zombie was. So now, when zombies are mentioned, not too many films about their Vodou origins spring to mind. There’s Victor Halperin’s seminal White Zombie (1932), Jacques Tourneur’s moody classic I Walked with a Zombie (1943), the James Bond film Live and Let Die (1973) …and then there’s The Serpent and the Rainbow. I can’t think of a more authentic and definitive addition to the zombie canon.

The opening scene shows us a beautifully-crafted black-and-red coffin having its final polish before being taken at gun-point from the yard by a trio of casually dressed men. From the outset, the music really sets the mood. Composer, Brad Fiedel, gives us a modern interpretation of hypnotic vodou drumming, with swells of synth keyboard and a twist of Italian horror soundtrack. We catch up with the stolen coffin as it is set alight and paraded through the streets in a procession led by the top-hatted, skull-faced, figure of Baron Samedi. This burnt offering is dumped outside the clinic where a doctor is just calling time of death for Christophe (Conrad Roberts) holding a mirror to the deceased’s nose and sticking a needle under his eye to make sure.

A sinister figure lurks outside the hospital and, a little later, shows up at at the unfortunate man’s funeral. Meet chief of police, Dargent Peytraud (Zakes Mokae), who emanates evil throughout. He sneers as the coffin is lowered into the grave. He seems to know that within, the ‘dead’ eyes have opened, and the victim is shedding a tear. 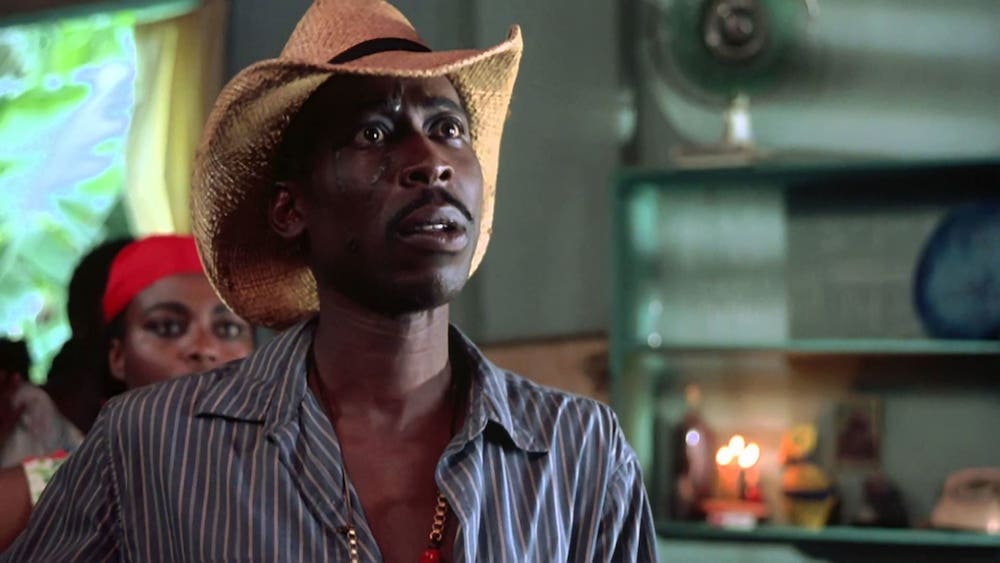 The film is based on the book by Wade Davis, the National Geographic Society’s Explorer in Residence; an anthropologist, ethnobotanist, author, and globe-trotting photographer. In the late 1970s and early ’80s he travelled extensively in South America studying indigenous shamanism and the use of rainforest plants in medicine and ritual. This was part of his fieldwork for the Harvard Botanical Museum and would later lead him to Haiti, where he was interested in zombification and how a reversible of state of apparent death could be induced. He conducted his ground-breaking research during the infamous era of the Tonton Macoute.

The Tonton Macoute formed in 1958 to spread a reign of terror under Haiti’s self-proclaimed president, François ‘Papa Doc’ Duvalier—who was elected in a landslide victory where his votes outnumbered the total Haitian population! They were his paramilitary secret police, commanded by a hierarchy of bokors (Vodou sorcerers) answerable only to Duvalier, who claimed to be the incarnation of Baron Samedi, Vodou Lord of the Dead. He always wore black to re-enforce the image, though stopped short of painting a skull on his face in the carnivalesque image popularised by the enigmatic henchman to Dr. Kananga, villain of Live and Let Die.

So, Wade Davis not only ran-up against superstition and fear during his investigations but stumbled into many problems with the corrupt government. He must have been a brave man! Published in 1985, a year before the collapse of the Duvalier family dictatorship, The Serpent and the Rainbow is a kind of back-packing travelogue mixed with anthropology and medical research. He recounts his often-frightening experiences, including conversing with real-life zombies (not sure about the terminology here!) that led him to discovering the active ingredients in the legendary zombification powders. He brought samples of the secret substance back to investigate its possible medicinal uses. 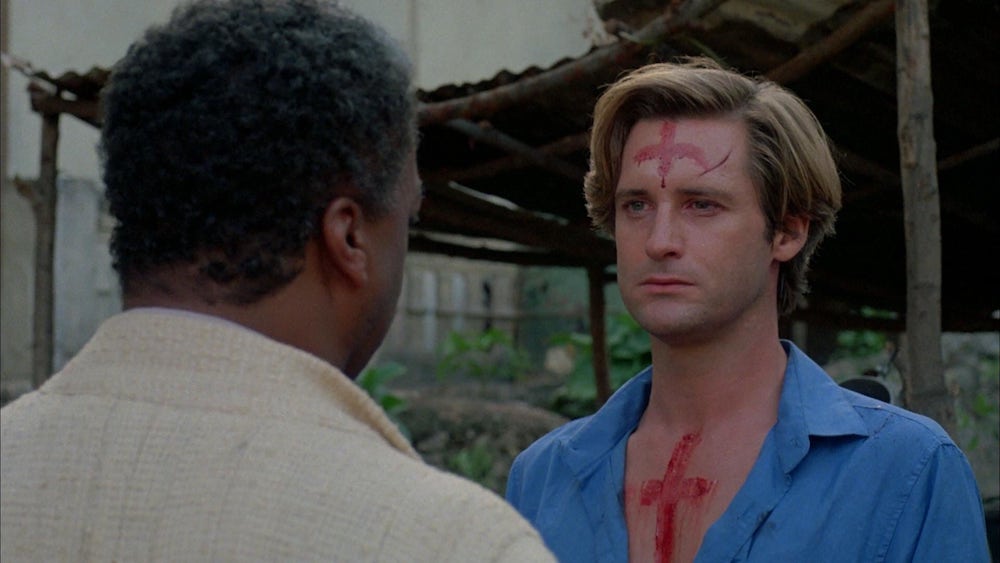 The sensational story ensured the book became a best-seller. Immediately, there was interest in adapting it for the screen. I assume that Davis had seen The Last Wave (1977), Peter Weir’s excellent film dealing with the mythology and magic of indigenous Aboriginal Australians, because he sold the rights on the condition that the film was directed by Weir… and that Mel Gibson played him! Neither were interested, but Wes Craven was…

Wes Craven made his mark with his debut feature, Last House on the Left (1972); an edgy, explicit and effective revenge thriller which became one of the most sought-after ‘video nasties’, along with I Spit On Your Grave (1978) and Driller Killer (1979). Craven showed off his low-budget directorial chops with hillbilly horror The Hills Have Eyes (1977) and the religious paranoia of Deadly Blessing (1981), and broke through to the mainstream with the surprise blockbuster A Nightmare on Elm Street (1984). If The Serpent and the Rainbow had been made by a ‘serious’ director and not a talented one who’d worked their way up from the indie horror scene, I’m sure it would be held in much higher regard. Maybe even garnered with a deserved array of prestigious awards.

Bill Pullman heads the cast as the ’Wade Davis’ character, renamed Dennis Alan. It was only the actor’s third film and he turns in an admirable performance as the initially arrogant Yank who gradually begins to doubt his deep-rooted faith in science. We first meet him on an expedition to the Amazon jungle where he earns the trust of a shaman and, rather sheepishly, drinks a potion that sends him on a dream quest. He’s pursued by a jaguar, which turns out to be as soft as a giant kitty, identifying itself as his animal spirit guide—I bet that’s going to come in handy before the end. He also has a disturbing premonition in which he sees a menacing man he will later recognise as Peytraud. This prologue seems to be a homage to similar imagery in John Boorman’s The Emerald Forest (1985), another excellent yet underrated film. 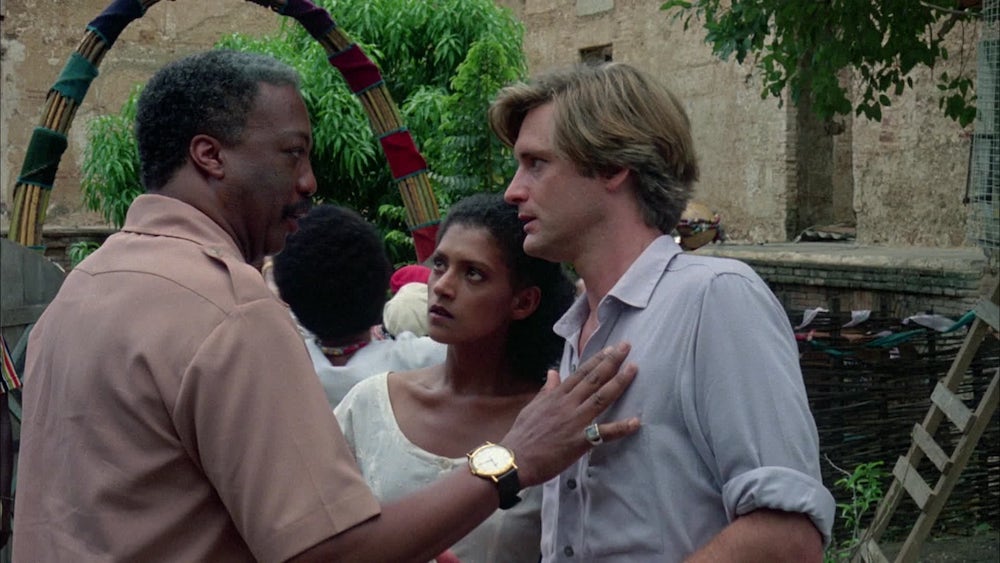 It’s also an early starring role for Cathy Tyson, her second in fact. She’s convincing as Marielle Duchamp, the doctor who helps Alan track down an authentic Zombie, who turns out to be Christophe. He is back from the dead and able to remember his previous life, as well as the process of zombification… Duchamp also introduces him to Lucien Celine (Paul Winfield) a Vodou priest, or Houngan, who reluctantly agrees to help in his search for the secret of zombie-making, putting him in touch with the sorcerer, Louis Mozart (Brent Jennings) who initially appears to be a charlatan, more hoodoo than vodou… but turns out to be the genuine article. Jennings plays this pivotal character as sympathetic, multi-facetted and in the end, sensitive beneath a tragically brave front. This is really Mozart’s story, as much as Alan’s.

There are some Emmy-award winners and nominees among the rest of the fine black cast, who all seem to have long and distinguished careers, though mainly in television. Perhaps because of their ethnicity? Which brings me to another reason why the film may tend to be overlooked: the representation of blacks as bare-chested, bongo-beaters may seem a tad un-PC. In his 2017 photo essay for the Smithsonian, photographer Troi Anderson documented the underground rituals to celebrate Haitian midsummer and found Vodou culture to be pretty timeless. He witnessed possession trances, ecstatic bongo-powered dances, blood sacrifices and listened to songs praising Damballah and Ayida Wedo—yes, they’re the spirits of the serpent and of the rainbow—and also some love for Baron Samedi. The film seems to be a fairly accurate representation of Haitian Vodou, after all!

The film is so well-crafted in every respect and is clearly a labour of love for Craven. There’s very clever cinematography from John Lindly, too. For the most part, colours are subdued and the lighting seems soft and natural, lending a documentary feel at times. By contrast, this gives the highly-stylised nightmare sequences additional impact. The reanimated corpse of a vodou queen, wearing her white wedding dress is a particularly effective example, owing much to the talented Diamanda Galás who provides the voices of the dead. You can hear more of her inhuman vocal gymnastics in Bram Stoker’s Dracula (1992), Lord of Illusions (1995), The Ring 2 (2005), The Conjuring (2013), and on her own 17 albums. 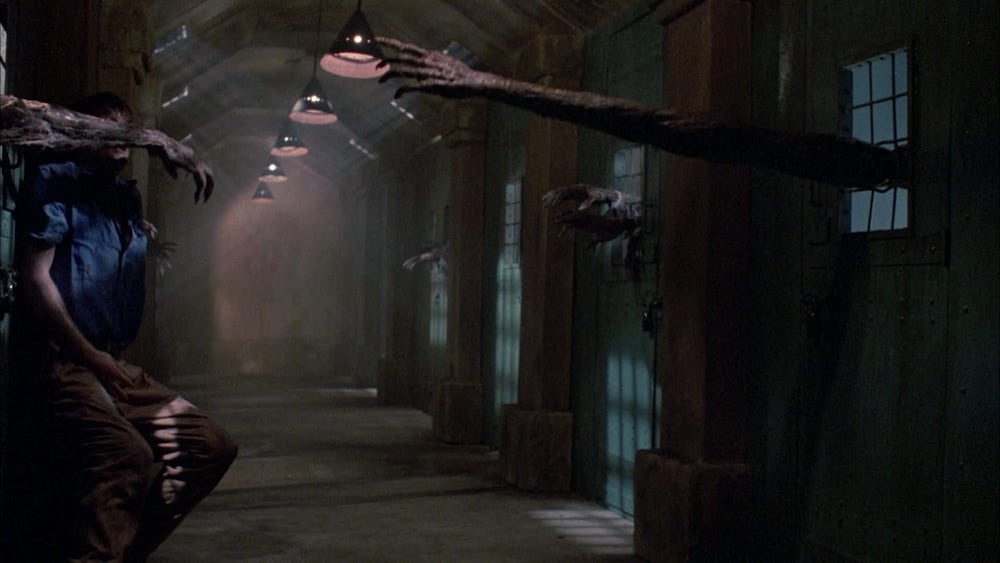 To ensure authenticity, Craven brought in Nora Dunfee, a dialect coach who had worked on Mrs. Soffel (1984) and Witness (1985), as well as another expert in the Creole patois of Haiti. He sought genuine Haitian locations as mentioned in the book, but whilst filming fell afoul of the political instability that still plagued the nation. The Tonton Macoute, although in disarray, still held considerable sway and the production threatened to open-up some not-so-old wounds. The government suggested it could no longer assure their safety. So, Craven used the Dominican Republic as a convincing ‘stand-in’ to complete the filming.

The first ‘directors cut’ of the film was around three hours long. After test screenings, Craven dropped extraneous plot threads and tightened it all up. This 98-minute version tested very well and was more attractive to distributors. I’ve never seen that extended edit, so can’t compare, but the version we have is perfectly paced—I imagine we lost a broader political backdrop.

The MPAA passed it with no cuts—a refreshing experience for Craven. For its UK release, a cock-fight scene had to be removed. Of course, the sequence was filmed on foreign shores, where the so-called sport is still popular with gamblers, but the activity is illegal in Britain and the RSPCA weren’t on hand to ensure the birds were handled compassionately! 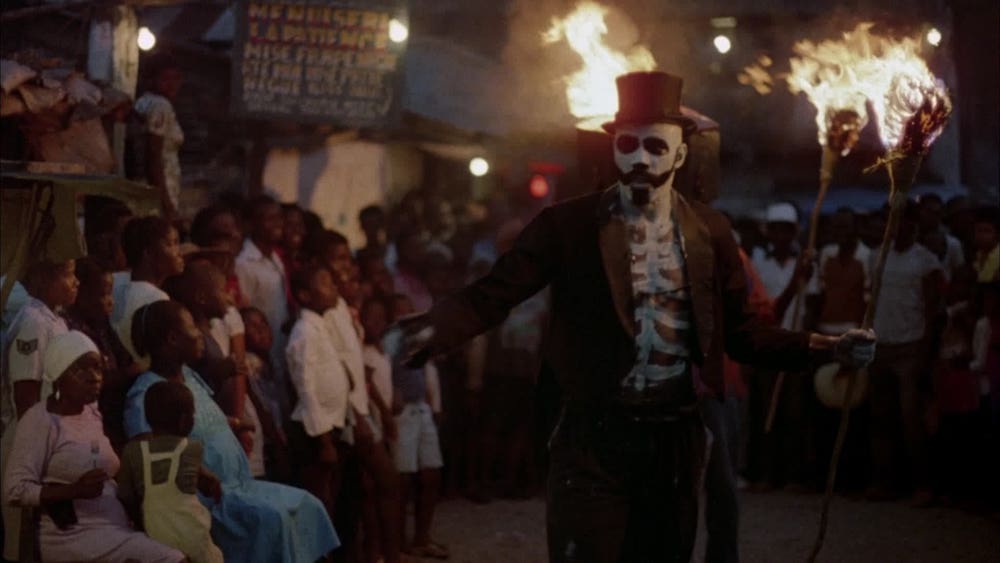 Some viewers may find a couple of the effects in the finale a little dated, if only because they are pre-CGI and a few of the visual tricks have become familiar from the Freddy Krueger franchise. I would agree there’s a dark sense of humour at work in most of the nightmarish special effects sequences—one would expect nothing less from Wes Craven, who never forgets that film should be entertainment, even when making a serious point. I think it was Oscar Wilde who said “if you want to tell people the truth, you’d better make them laugh or they’ll kill you.” The quote’s origin is disputed.

All the horror and supernatural happenings could be explained away as the symptoms of hypnotic suggestion, hysteria or drug-induced hallucinations. But there’s a darker thread running through it all: a tangible human evil. By far the most terrifying moments are those closer to reality. The scene when Alan is captured and intimidated by Peytraud is particularly intense and it’s difficult not to wince when his scrotum gets nailed to a chair!

Real horror lies in the unrestrained sadistic fervour of the Tonton Macoute, an entire population oppressed by fear, superstition, drugs, extreme poverty and the constant threat of rape and torture. At the height of Duvalier’s rule, more than half of Haiti’s national budget was going into the pockets of his cronies and secret police. This real-world historical and political context is unusual in horror films and marks The Serpent and the Rainbow as an important contribution to the genre.

It remains relevant 30 years after it was made and seems just as fresh. Alas, there was no celebratory collectors’ edition released. A commentary by Wade Davis would have been fantastic! If just to pick-out the fact from the fiction. I’m a fan of Wes Craven and, along with Shocker (1989) it’s a favourite—I find it almost impossible to fault.