Martial arts movies are a genre I’m not hugely interested in, perhaps because they weren’t a big part of my filmgoing experience growing up. I appreciate a good fight scene as much as the next man, and there was a time when the Hollywood impact of Crouching Tiger, Hidden Dragon and The Matrix lured me into watching a few classics of chopsocky cinema… but I always find them difficult to watch. The balletic violence can be great fun, but the stories are often too simplistic for my tastes, the acting is usually terrible, the English dubbing hilariously poor (should you opt to disregard the subtitles), while some unfamiliarity with Asian culture/humour, and the distancing effect of time, can make them feel too alien.

It’s at this point you’re expecting me to contradict the above with a heartfelt love letter to Drunken Master, but I’m going to have to disappoint you. A comedy martial arts movie from Yuen Woo-ping (Crouching Tiger, Hidden Dragon: Sword of Destiny), starring a young “Jacky Chan”, Drunken Master comes with pop culture cachet. We all know the amusing title. This movie put Jackie Chan on the map, because it was here he differentiated himself from Bruce Lee by taking a comedic approach to combat.

Drunken Master became the template for the knockabout tone of the movies Chan would go on to make, but that other movies would steal from. It’s an important film, to be sure, which explains why it’s been given a ‘Masters of Cinema’ release from Eureka Video, but it still doesn’t avoid most of the problems I have with this branch of world cinema.

The story concerns Wong Fei-hung (Chan), a martial artist who actually existed during the Qing Dynasty and later became a Chinese folk hero. In this movie, ‘Freddie Wong’, as he’s also referred to, is a randy guy who can’t help getting into trouble in his village, incurring the wrath of his sensei, his own aunt and cousin (unwittingly), and a man whose father is an influential man in town. Frustrated by his son’s bad attitude and mischievous streak, Wong is sent by his father for much harder martial arts training at the hand of Su Hua Chi (Yuen Siu-tien), a legendary old man whose fragile appearance is deceptive because he knows the secret Zui Quan (“drunken fist”) style of kung fu.

As one would expect from a kung fu movie, there’s also a villain to defeat in the form of Yim Tit-sam (Hwang Jang Lee), a fighter famed for his unstoppable “Devil’s Kick”, who’s hired to kill Wong’s father. This understandably prompts Wong to knuckle down with his tough training and become the eponymous ‘Drunken Master’, in order to defeat “Thunderfoot” Yim and save his father’s life.

It sounds like a familiar but fun tale, and it probably would have been fine at half its runtime. But, clocking in at nearly two hours, Drunken Master tests your patience, and I don’t think western audiences ever found the comedy all that funny. Some of Chan’s slapstick retains a Keatonesque appeal, but a lot of the humour here is just childish and rather stupid. If you find yourself zoning out between the fights (which fortunately occur with some regularity), I’m still not sure the action lives up to expectations.

Drunken Master may be a defining work of Hong Kong action cinema, creating many of the tropes that turned into parodies during the 1980s, but I won’t pretend to have enjoyed most of what I saw.

Chan and the rest of the cast are clearly better fighters than actors, but the hand-to-hand combat always feels very over-rehearsed. Which it was, of course, but it shouldn’t appear that way quite so blatantly. It’s like watching people go through “dance moves” together, which I can appreciate on an artistic level of watching the human body in fluid motion, but none of the fights quicken the pulse because you never believe anyone’s in actual danger of being harmed. Chan would, of course, rectify this problem in his future movies by performing life-threatening stunts on camera, which quickly became his trademark. But, in Drunken Master, the thrill of seeing people fighting is tempered by the staccato movement—not to mention the now very cliched use of loud sound effects to sell the punches, and ‘whooshing’ limb movements (which are people blowing loudly into microphones).

I feel like I’m being very negative about a very influential movie (the bonus material contains an interview with The Raid director Gareth Evans, who smothers it with praise), but I can only be true to my own opinion. If I’d seen Drunken Master during late-1970s or early-’80s, it would have felt more revolutionary to me, but you don’t get to choose when you see things for the first time.

But if you already love Drunken Master, rest assured this is a terrific release from Eureka Video, with a 4K digital restoration that includes the rare Cantonese soundtrack. It hasn’t been remastered into 5.1 surround sound, alas, which perhaps explains why I found both the Cantonese and Mandarin soundtracks too heavy in stereo. The English dub downscales the audio to mono, but by reducing some of the sound mix to focus on the dubbed voices, it somehow felt a lot clearer to me. Opinions will vary on that issue, I’m sure, and it’s possibly sacrilege to even consider not choosing a subtitled version. 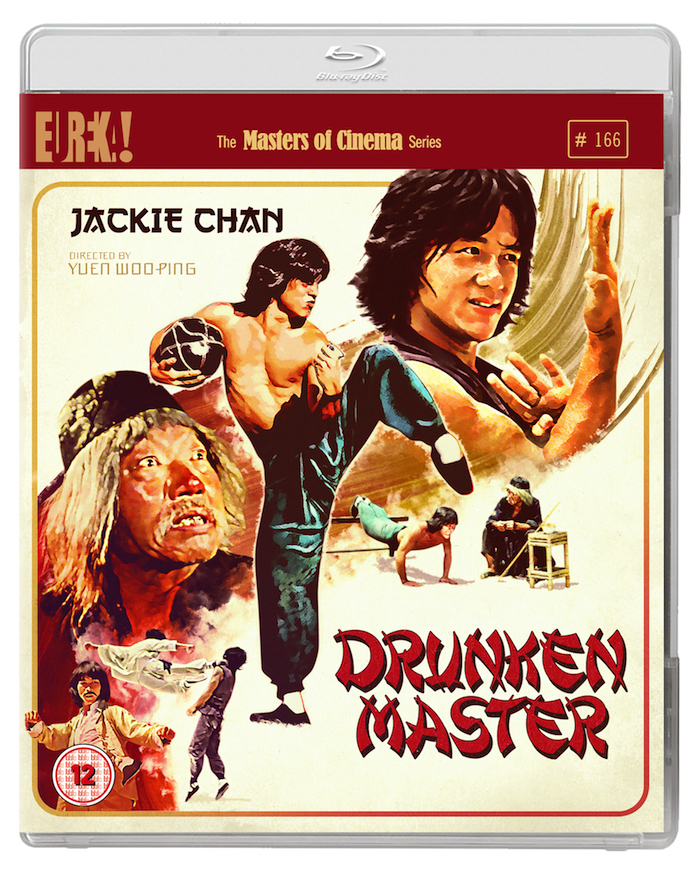