Jackie Chan was a superstar in the 1980s, but only across Asia. The popular martial artist, actor, director, producer, stuntman, and singer was having difficulty breaking into the lucrative US market, debuting with box office flop The Big Brawl (1980), playing a martial artist taking on the mob in 1930s Chicago. After a supporting role in Hong Kong-US comedy The Cannonball Run (1981), playing a Japanese racer in a high-tech Subaru, Chan tried his luck again with Golden Harvest/Warner Bros. co-production The Protector (1985). The experience wasn’t pleasant…

Chan clashed with director James Glickenhaus over his alleged inattention to detail with the action choreography, walked off set in frustration, and only returned because of contractual obligations. Chan was allowed to re-edit The Protector himself for its Hong Kong release, to better reflect his filmmaking style, then returned to his homeland to put his Hollywood dreams behind him. After a few more false starts in the early-1990s, Jackie Chan eventually broke into the US when Rumble in the Bronx (1995) paved the way for buddy cop comedy Rush Hour (1998). 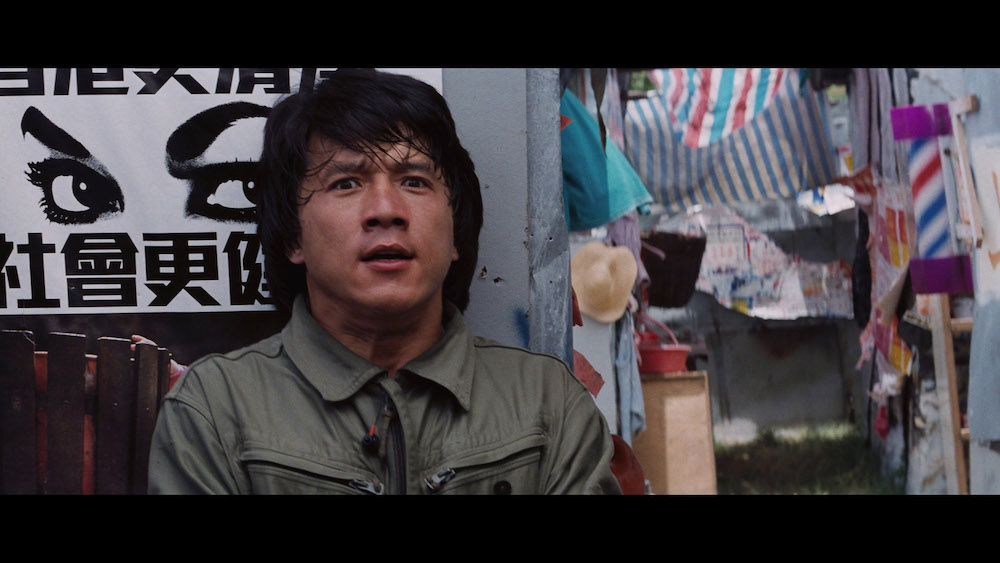 The movie that helped cleanse Chan’s soul after The Protector debacle was Police Story (1985), which he directed and co-wrote with frequent collaborator Edward Tang. It’s became a signature movie of his illustrious career, producing five sequels, the latest as recently as 2013 (although that one’s actually a second reboot, so Police Story only has three direct sequels).

Chan thinks the original Police Story is the best action movie he made, so does it live up to the hype?

Police Story concerns Inspector Chan Ka-Kui (Chan), a young cop working for the Royal Hong Kong Police Force, who becomes a hero after capturing crime lord Chu Tao (Chor Yuen) after an undercover sting in a shantytown goes wrong. The operation is bungled, leading to gunfire with civilians caught in the crossfire, leading to a sequence where Chan chases a double-decker bus commandeered by Chu Tao. 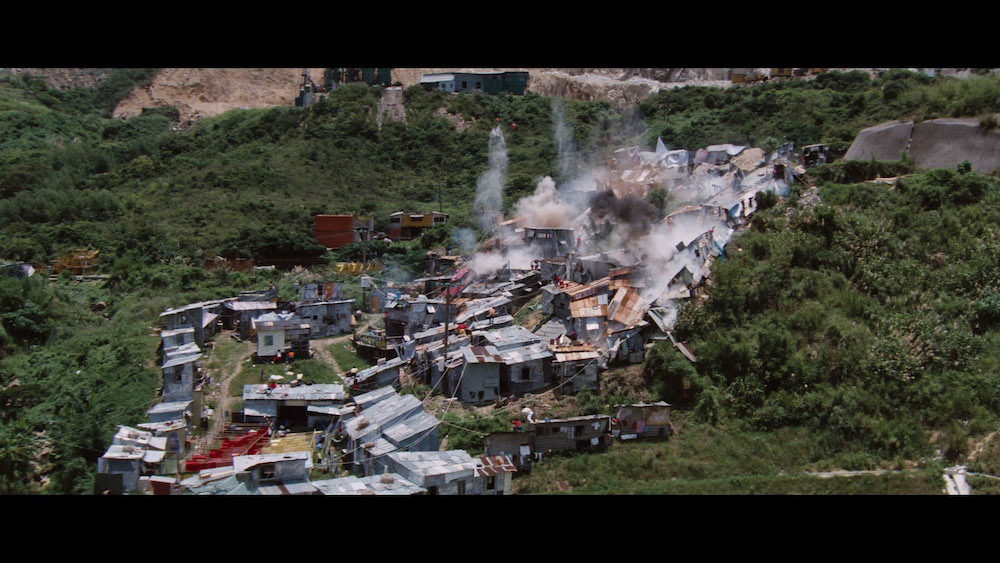 As one might expect from a Jackie Chan picture from his Hong Kong heyday, it’s a beautiful stunt to behold. Numerous vehicles careen down a hillside, tearing through tin roof huts, with the entire set built on a large downward ramp obscured by the buildings being demolished and exploded by detonating hidden propane tanks.

Michael Bay liked the shantytown sequence so much he stole it for Bad Boys II (2003), or is that “paid homage to”?

The problem with Asian action films like Police Story, at least for me, is how difficult it can be to connect emotionally to events. So while there are a lot of practical stunts and violence to make your jaw drop at their technical brilliance and showmanship, I rarely care for the safety of the characters involved, or find myself anxious to see the two-dimensional villains get their comeuppance. Police Story is another movie with elaborate set-pieces hung on a thin storyline, rarely improved by knowing the surrounding context. 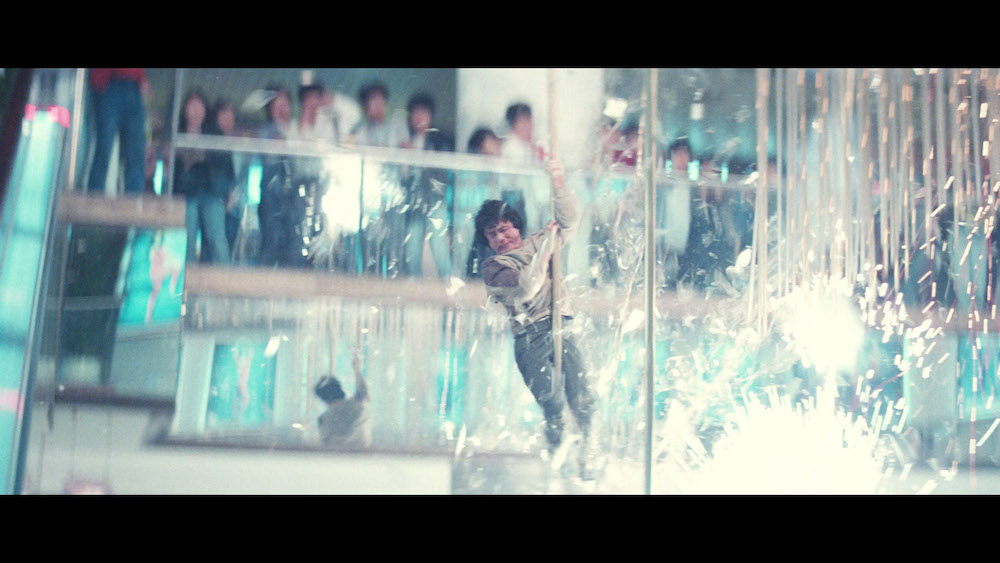 Chan is always very charming and the set-pieces are enjoyable to watch, but Police Story doesn’t have as many action beats as one might expect. It’s bookended by two wonderful sequences (the aforementioned shantytown demolition, and a famous shopping mall melee), but beyond a few fights in the middle the film has to sustain itself on plot and comedy antics.

Unfortunately, the script is functional at best, with Chan asked to protect Tao’s secretary Selina Fong (Brigitte Lin) before she testifies in court about her boss’s crimes. And the comedy is very goofy, with humour that’s now both dated and never travelled overseas very well to begin with. The funniest moment is Chan getting tangled in various phone cords as he struggles to answer calls and keeps various people on hold, getting confused over who’s on which line. The rest is silly pratfalls, overemphasised reaction shots, cake-in-the-face yucks, ‘moonwalking’ dog shit off your shoe, and suchlike. 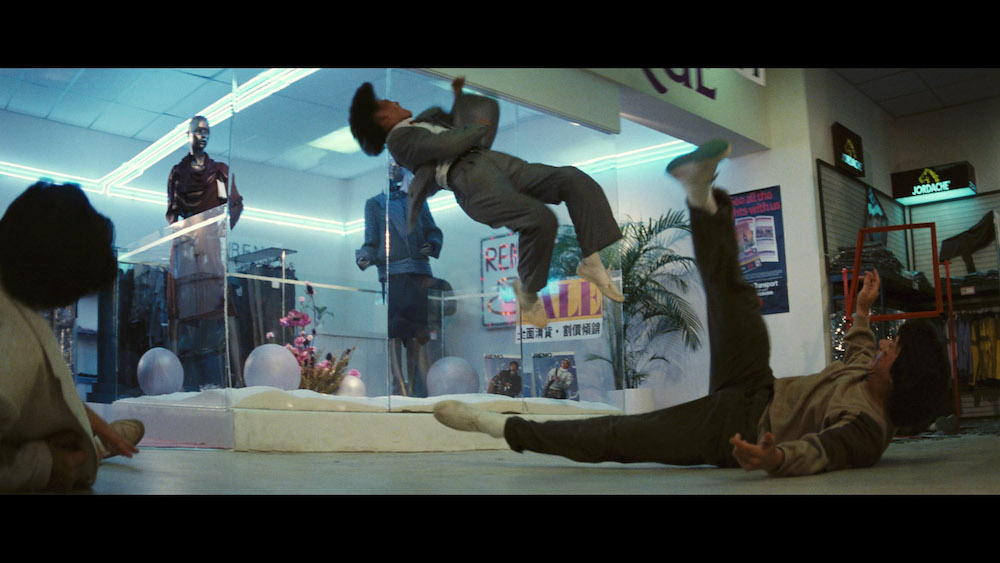 Tone is the biggest issue with Police Story.

It begins on a surprisingly serious note with the shantytown operation hewing close to the balletic violence of a John Woo movie, but transforms into Buster Keaton-style hijinks with Chan hooked onto a runaway bus with an umbrella. The middle even has an odd scene where a home invasion slasher situation is used for laughs, as a masked killer tries to knife a young woman to death with “hilarious” consequences. Police Story finds better footing in the 12-minute climax where Chan gets to do what he was born to: punch and kick people, jump off tall structures, and run through a seemingly innocuous environment where ordinary items become lethal weapons.

The crew nicknamed this film “Glass Story” when the number of sugar glass panes being shattering reached an astonishing level, and this is the movie that contains arguably Chan’s most famous stunt: sliding down a seven-storey high indoor pole adorned with electrical lights, before falling through a glass roof. Chan suffered second-degree burns to his hands because of the friction on the pole, damaged his back when he landed, and dislocated his pelvis. He was immediately hospitalised. 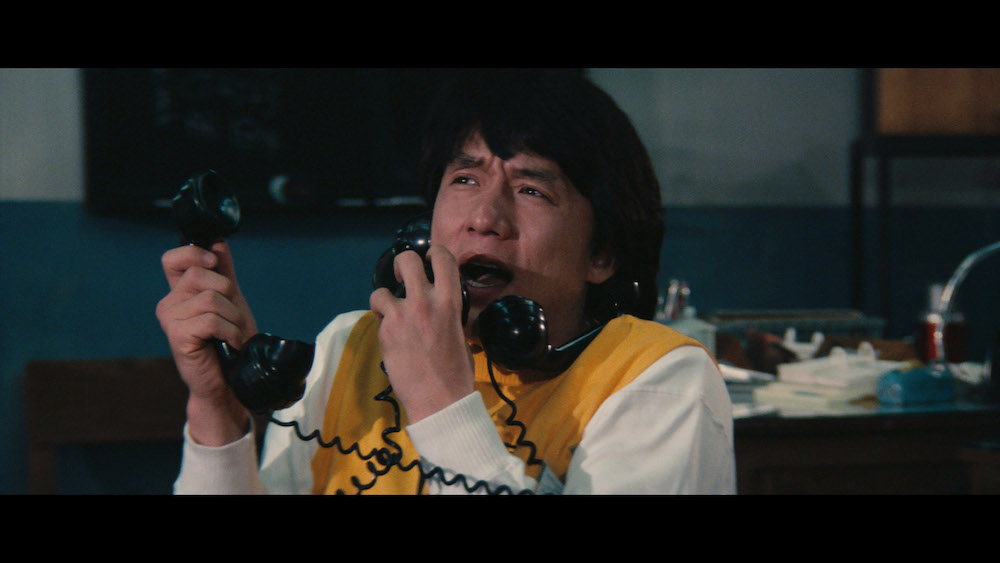 But the stunt was captured on film, and gets replayed twice from different angles because Chan was so pleased with how it came out. It slightly breaks the “reality” of the movie to show indulgent instant replays, but one can’t begrudge them knowing what Chan went through for our entertainment. We’re accustomed to visual effects clouding the reality of what we see at the cinema, or for the knowledge of Health & Safety practices to undercut any sense of true danger… but here, Chan basically did what it looks like he did, for real.

My overriding opinion of Police Story is that it’s a seminal action movie of the 1980s, because Chan was at the peak of his powers as a stuntman, martial artist, and fight choreographer. The kinetic action is still entertaining, provoking wonderment because of the speed, skill, and precision each moment requires. But they’re not a huge part of the film’s 101-minutes, perhaps taking up slightly less than a third of that runtime. So there’s a lot of childish humour and tedious crime plotting to sit through, which you’re unlikely to ever watch again. Best jump straight to Chan leaping onto moving escalators, drop-kicking villains to the floor, or driving a motorcycle through glass with some guy perched on his front tyre. 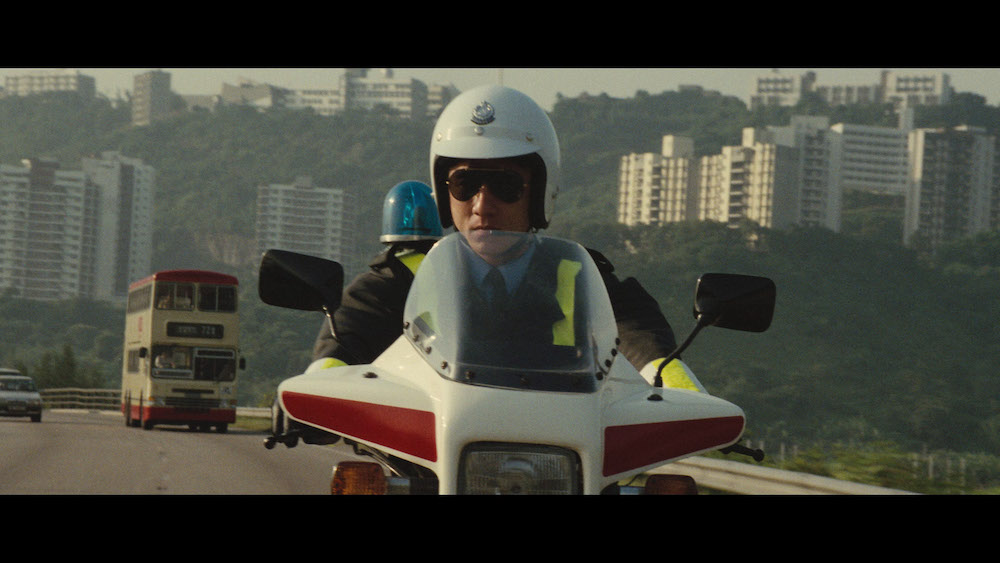 Having made the Indiana Jones-style Armour of God (1986) and Project A Part II (1987) in the interim, Jackie Chan returned as Inspector Chan Ka-Kui for a follow-up to Police Story. This movie picks thins up hours after the end of the previous instalment, with Inspector Chan demoted to highway patrol by his superiors because of his unprofessional violence and the widespread damage he caused to a shopping mall while trying to apprehend Chu Tao.

Tao himself is soon seeking revenge on poor Chan, after being released from prison on compassionate grounds because he’s terminally ill. The crime boss thus orders his right-hand man John Ko (Charlie Cho) to make Chan’s life a misery before he dies, so goons start threatening Chan’s girlfriend May (Maggie Cheung). Chan is forced take matters into his own hands as the intimidation escalates, eventually resigning from the force after a restaurant standoff gets out of hand. But after preventing catastrophe when a shopping mall is targeted by bombers aiming to blackmail the property’s owners for $10M, Chan is reinstated and told to find the mysterious bomb-makers and bring them to justice… 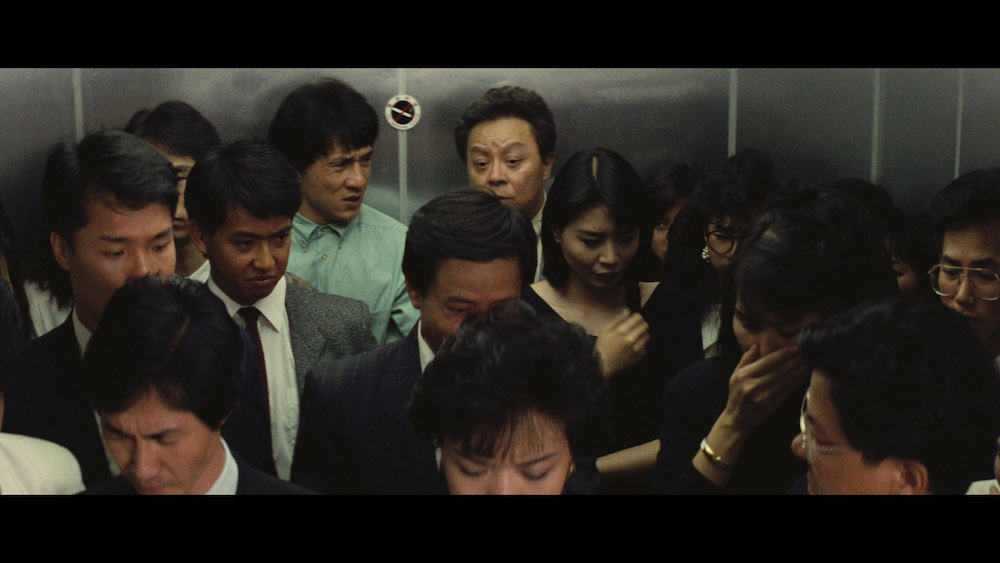 Police Story 2 suffers from the exact opposite of its predecessor’s problems.

Jackie Chan took criticism over Police Story’s anaemic storyline to heart, so this sequel has a more complex narrative and is therefore 20-minutes longer as a result. The problem is there’s somehow less action than Police Story, being spread even thinner, so it becomes more of a struggle to sit through.

The movie opens with a montage of the best stunts from the original, which only sets expectations too high. While there’s an excellent group fight around a children’s playground, and a decent climax inside a warehouse involving a deaf-mute bomber (Benny Lai), Police Story 2 is a more conventional thriller. 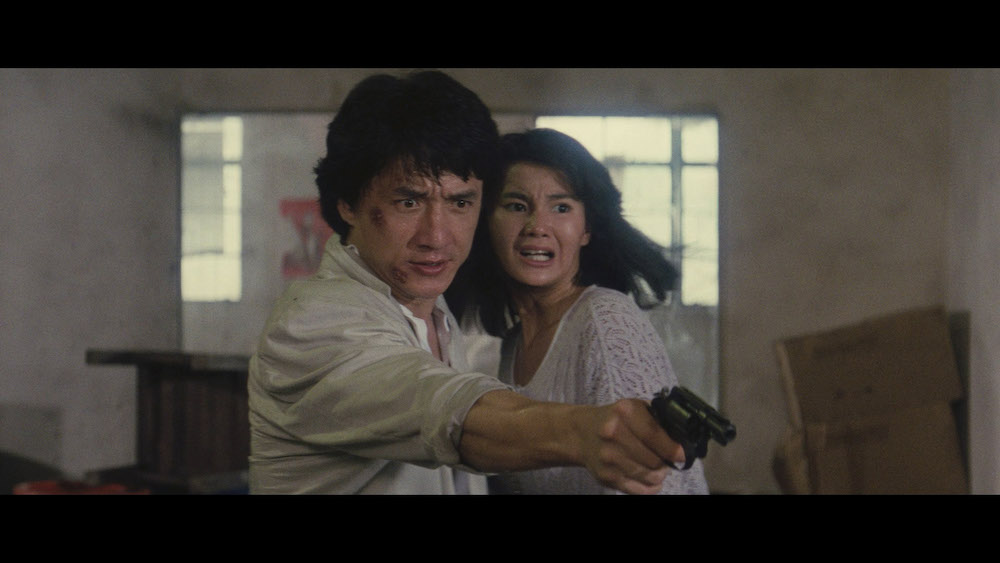 Even the silly comedy’s muted this time around, with only a few moments registering as full-blooded attempts to make audiences laugh. There’s a cliched elevator fart joke, a decent running gag that Ko’s glasses keep getting smashed by Chan, and a genuinely chucklesome moment when Inspector Chou (Bill Tung) is revealed sat on a toilet when May busts into his cubicle to stand on the cistern and berate her boyfriend over the dividing wall.

In general it seems writers Chan and Tang wanted Part 2 to be more dramatic and narratively richer.

To this end, they have Chan doing a wider variety of things than doggedly pursue bad guys singlehandedly. He goes undercover wearing a fake moustache and nerdy spectacles, has to sneak into a boardroom to plant a bug under a table, and later gets to lead a team of younger cops doing special ops work. 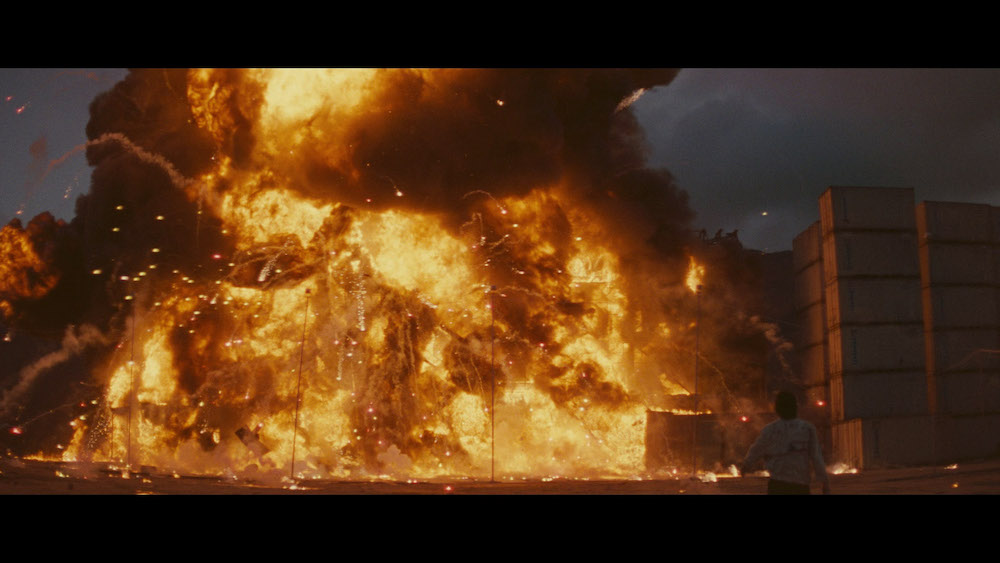 Unfortunately, this means Chan sometimes takes a backseat to the action, directing others around as he sits inside a surveillance van. While it’s nice the sequel does new things and took Police Story’s constructive criticism to heart, it’s often at the expense of what audiences loved about the first one. I simply don’t understand why an action sequel like this was allowed to contains fewer fights, with less memorable daredevil stunts.

Police Story 2 is a missed opportunity.

I was more gripped by this sequel’s storyline to begin with, but it soon drifts into a different story about bombers extorting money from a big corporation… and the two halves don’t fit together well. And while Chan’s character gets more diverse things to do this time around, and the story builds to a fun warehouse climax (involving a ‘falling metal racks’ sequence where Cheung suffered a real head injury), such improvements are outweighed by the the fact nothing surpasses what Police Story achieved in terms of its action and stunts.

It’s frustrating. If you spliced both these movie’s storylines together, tightened up the flabby pacing, and found a logical way to keep all of the action sequences intact and sequential… you’d have a true masterpiece. 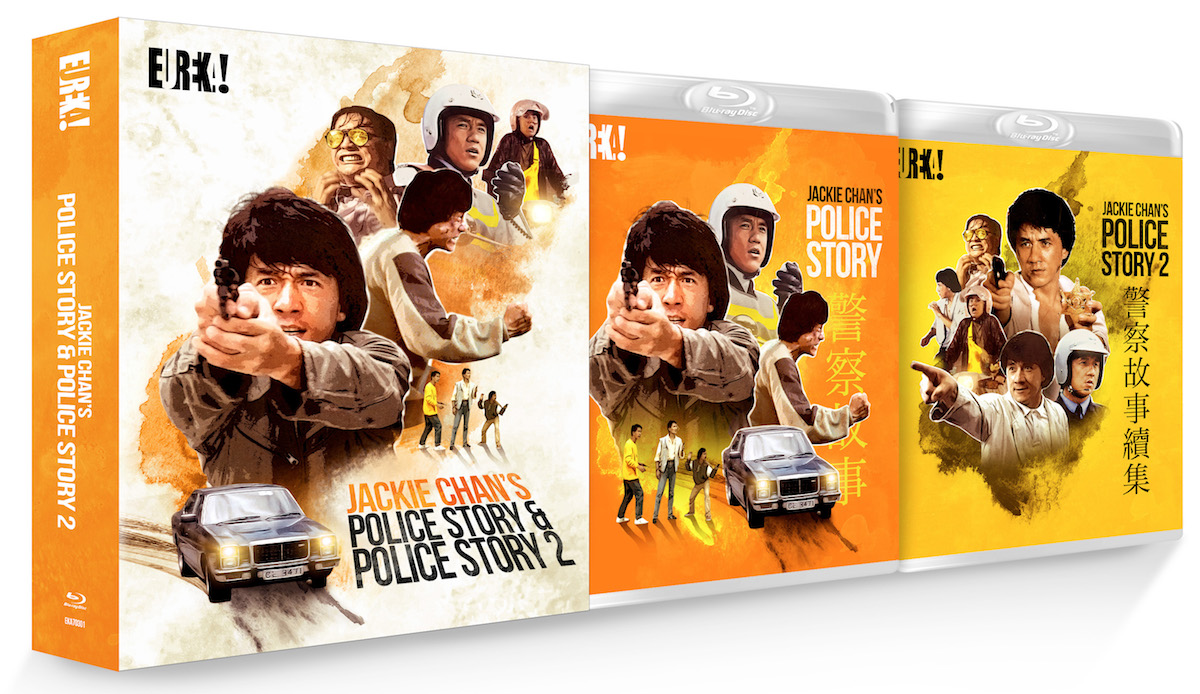 Arriving on a Special Limited Edition (3,000 copies) box-set containing both movies, Police Story and Police Story 2 have both been restored from 4K sources. They’ve never looked better, especially if you haven’t revisited them since wearing your fuzzy VHS tape out in the early-1990s.

For Police Story, the 1080p 2.35:1 image is often surprisingly fresh looking for a movie over three decades old, particularly during outdoors scenes in the the daytime, but there’s obviously grain and some scenes that show their age.

Police Story 2 isn’t as clean looking as its predecessor, despite being made three years later, perhaps not helped because it already had a duller brown-grey aesthetic. But both movies are notable improvements on previous home video releases, and occasionally hide their age thanks to this loving restoration. 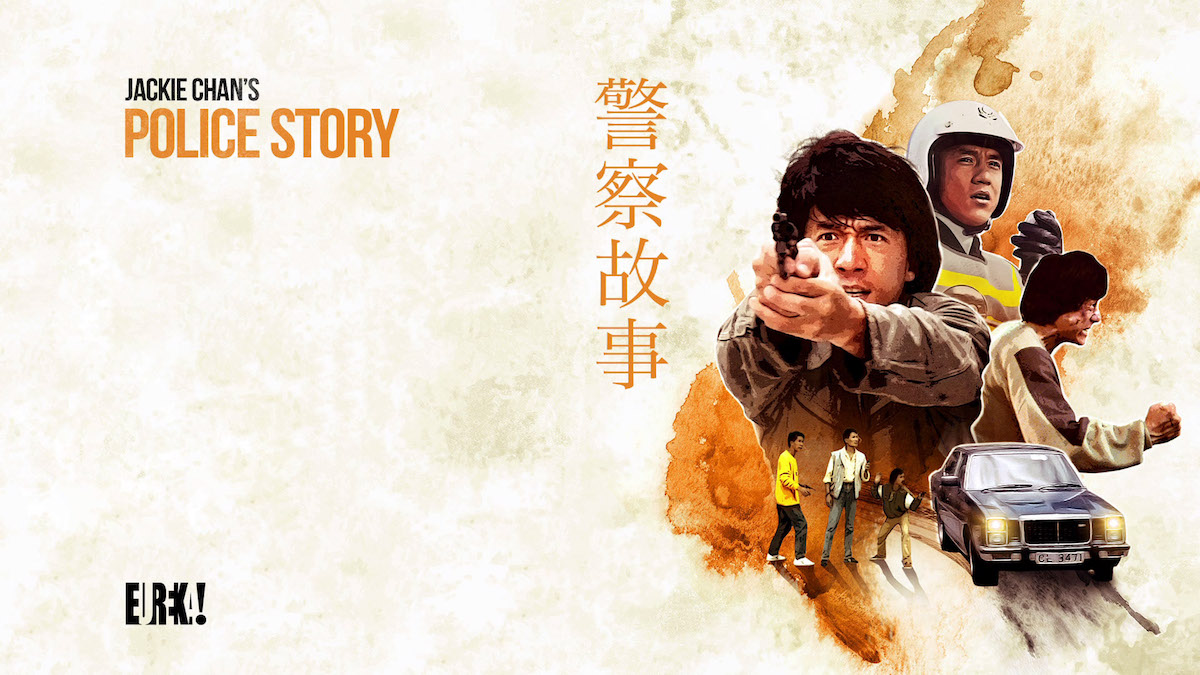 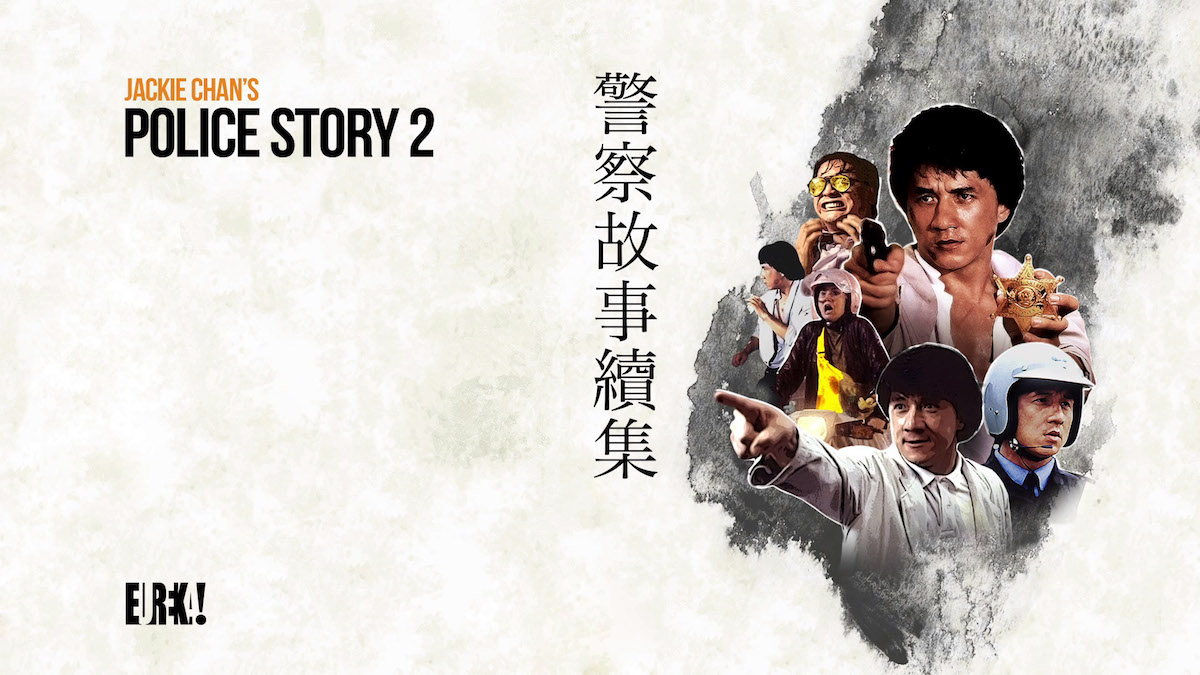