For decades, South Korea’s produced some of the world’s most original films. From Chan-wook Park’s cult hit Oldboy (2003) to Chang-dong Lee’s remarkable drama Burning (2018), there’s a pantheon of pictures drawing from many genres. The country’s output manages to be deeply provocative and thematically bold.

Joon-ho Bong’s renowned for dark tales like Memoirs of Murder (2003) and The Host (2006), each coming with a unique and unsettling vision of the world. Known to make unconventional social statements, Joon-ho’s Snowpiercer (2013) was an apocalyptic action thriller exploring environmental and class issues, whereas the friendship between a child and a giant pig in Okja (2017) raised awareness of our meat-obsessed economy. Inequality is clearly an issue close to the filmmaker’s heart. Now returning with 2019 Cannes Film Festival Palme d’Or winner Parasite, Joon-ho explores similar territory but with a contemporary setting and in dark comedic fashion. 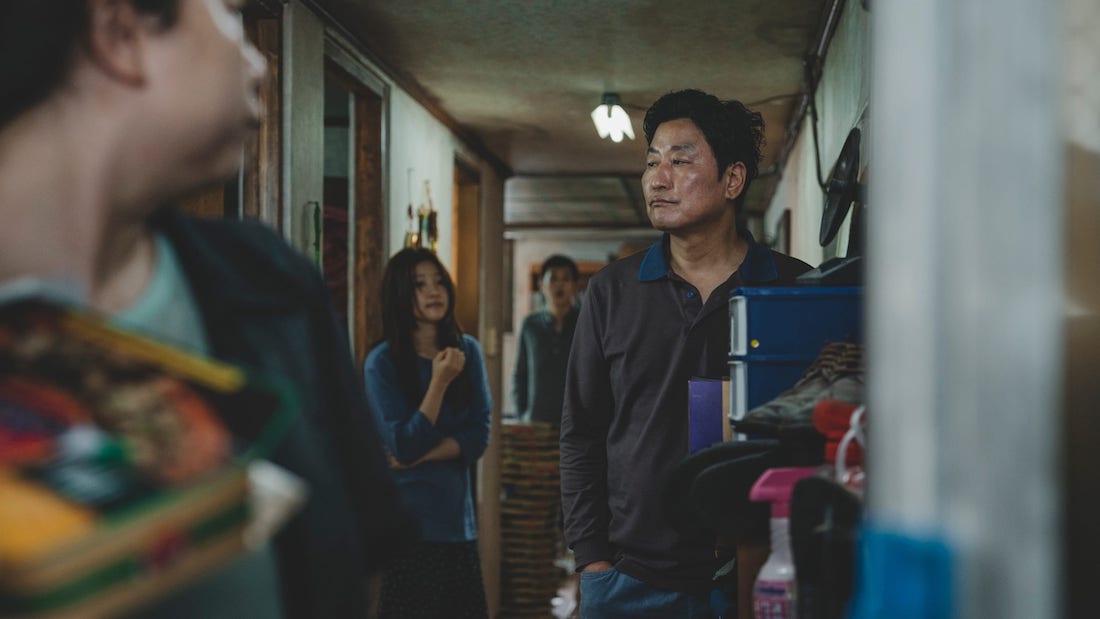 Opening in the poor Kim family’s basement apartment, we’re introduced to Ki-woo (Woo-sir Choi) and his sister Ki-jung (So-dam Park) scuttling around trying to leech free wi-fi, while their mother (Hye-jin Jang) nags their father Ki-Taek (Kang-ho Song) to wake up and fold pizza boxes for a pittance.

After a hard day’s work, Ki-woo’s asked by a friend if he wants a job teaching English to the daughter of Mr Park—a wealthy patriarch of four and owner of a big I.T company. Immediately sensing the potential to fleece this rich family for all they’re worth, the Kim’s adopt underhanded tricks to get jobs at the Park’s mansion. Embedding themselves within the well-to-do family, they eliminate the potential competition (the housemaid, the driver), and focus on milking their marks for every penny and creature comfort they have.

Full credit to this ensemble, who are able to switch moods at the flick of a switch. Each actor balances a performance vacillating between comedic and tragic. It feels criminal choosing a standout, but Kang-ho Song’s (The Host) performance as the Kim’s deadbeat patriarch is truly stirring. He only wants the best for his family and is easily the heart of the picture, providing a softer contrast amongst the satirical comedy and brutal violence. Watching his character slowly unravel is tragic. 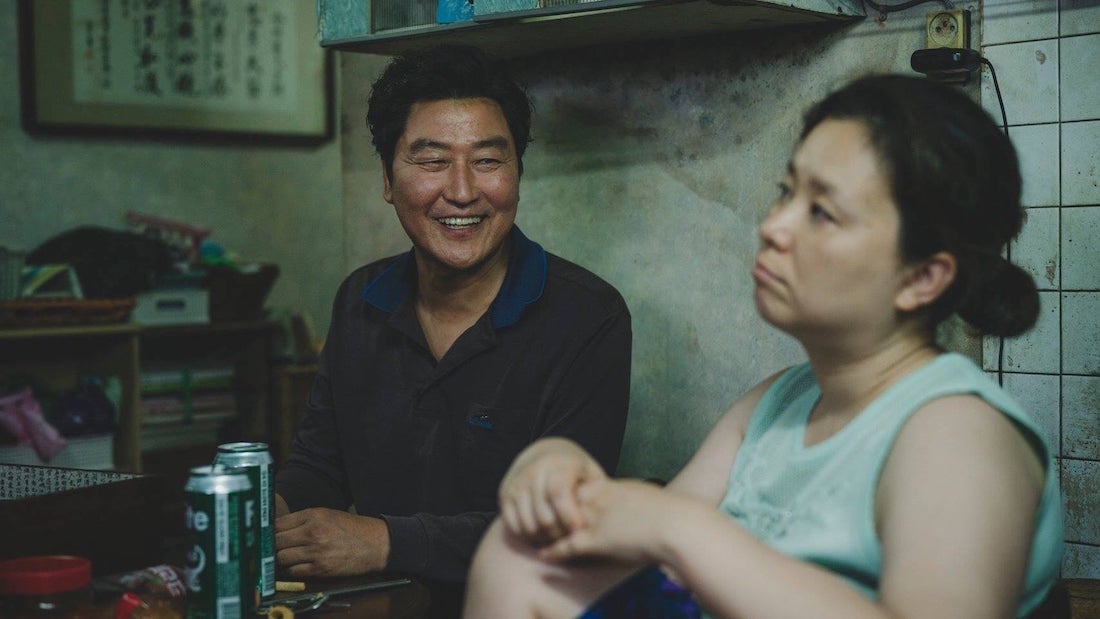 Of the Kim children, Woo-sir Choi (Train to Busan) as son Ki-woo (Kevin), portrays his character with believable naivety. With aspirations of attending college, he’s the sole ray of light for their family, but he can’t help but concoct a devious scheme as an easy way out of the slums.

Elsewhere, So-dam Park delivers most of the satire as the Kim family daughter, and her star’s been rising since giving a memorable performance in Jae-hyun Jang’s The Priests (2015). As the hilariously crafty Ki-jung (Jessica), she enjoys every challenge that comes with the job, particularly in one scene where she admits reciting information from the internet to interpret art.

In a twist to the usual rich-vs-poor cliches, the Park family are naive and almost simplistic in their interactions with the Kims. Sun-Hyun Lee (Hard Day) is entertaining as rich tech magnate Mr Park, perfecting an arrogant swagger. His wife Yeo-jeong Jo (The Servant) also evokes many laughs as she’s incredibly gullible and delivers some of Parasite’s funniest moments early on. She’s oblivious to signs of trouble but is highly anxious about the safety of her family, managing to carry a different kind of weight to her character as the story progresses. She starts off as a loving wife who evolves into a spiteful boss. I couldn’t help empathise for her character. 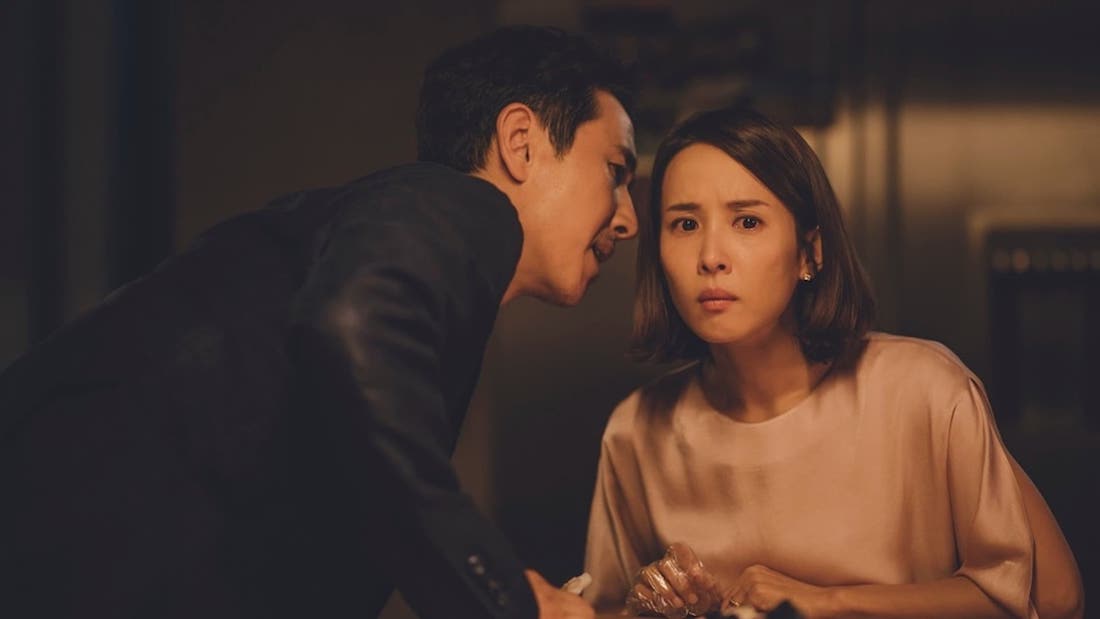 Joon-ho directs Parasite with his customary energy and style, with each frame’s precision carrying meaning. Almost every shot contains so much visual information that the simplest of moments establish everything we need to know. A darkened doorway to the cellar of the Park’s kitchen sits in the middle of the frame, immediately drawing importance to itself. The use of foreshadowing as a character comically bumps their head.

He doesn’t shy away from exploring several themes, either. Along with class structure, Parasite provides commentary on his country’s infamous northern neighbour. The dangers of pushing the ‘send’ button on a phone will destroy the family’s life as much as North Korea launching nuclear missiles. One hilarious moment sees the Park’s housekeeper Jeong-eun Lee (Mother) impersonating a communist news broadcast.

Written by Joon-ho and Jin-won Han, the script for Parasite excellent. Limiting the cast to two small families, each one of them’s so finely written and fleshed out. Most importantly, the story is believable. Similarly to Jordan Peele’s Get Out (2017), it works on multiple levels. The first act slowly unfolds like a black comedy as the conniving Kim’s slowly inveigle their way into the Park’s mansion. These early scenes play out like a cross between Dirty Rotten Scoundrels (1988) and Funny Games (1997). Watching the impoverished Kim family manipulate their way into the extravagant Park mansion is genuinely satisfying. You’re fully on board with their cunning scheme. However, as the interactions of the characters increase, the stakes rise… 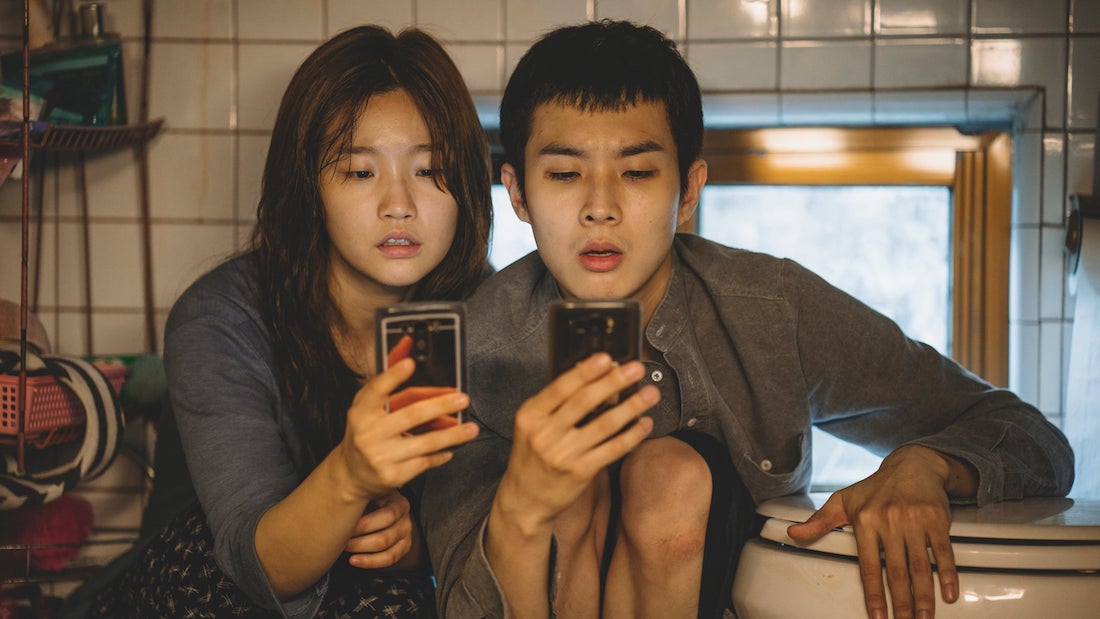 Personally, I enjoyed how Joon-ho maintained a level of tension throughout. I couldn’t help but feel nervous whether or not the Kim’s would get caught. As the ominous vibe increases, so does one’s anxiety. And, roughly halfway through, the narrative gets flipped on its head creating a fearful and melancholy atmosphere. While the Parks are on a camping trip, the Kim family treat the mansion like it’s their own home, until a knock on the door from a former employee results in one of the first sharp turns towards psychological horror. The finesse of Joon-ho’s direction lies within the tonal shifts. Assuming the story’s heading down a particular path, the director knocks you off your feet and changes direction.

This was a personal highlight of Parasite: the toying with emotions and expectations. Joon-ho holds his audience in the palm of his hand. Like a fairground ride filled with twists and turns, the narrative travels to places one wouldn’t expect. The startling finale will catch audiences off guard. And there is no real heroes or villains. The Park family are ‘nice’ to the Kims. They never once show signs of malice. They’re welcoming and pay them generously. Whereas the Kim’s are the underdogs of society and downtrodden, so one can’t help but root for them to achieve a better life. 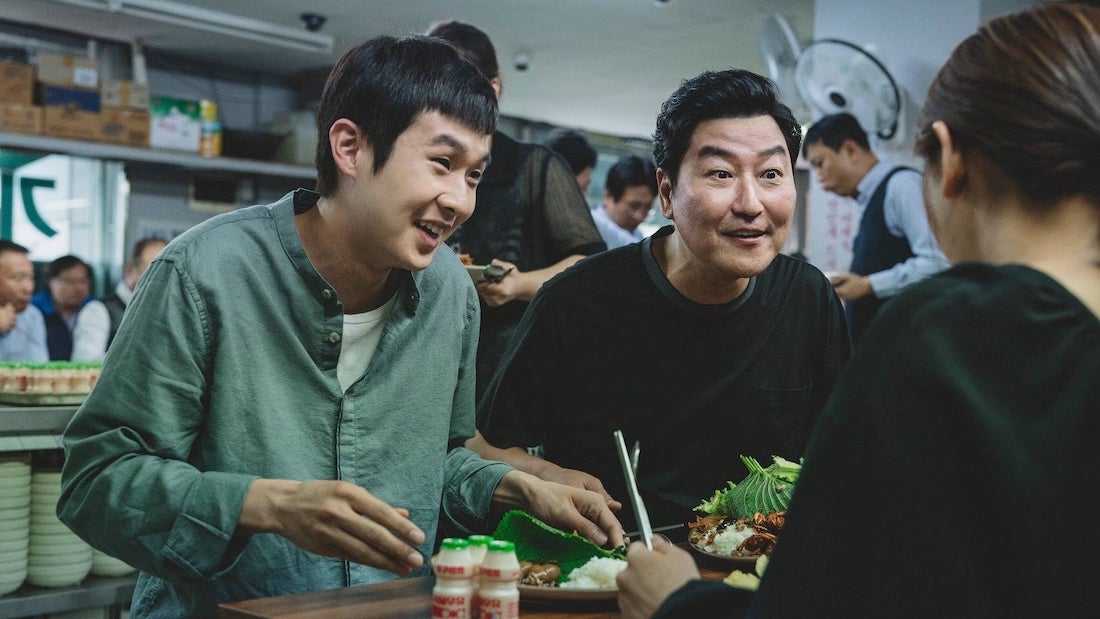 One can only assume that Joon-ho’s underlining message is that the real parasite of the world, and the real villain to his story, is wealth. In a key scene, Ki-woo receives a Gongshi (scholar’s rock) as a gift from a friend. He refers to it as a “metaphor” to bring wealth to his family. Later, after sewage water is slowly destroying their family home, it’s the only valuable he sees worthy of saving. Whilst having a meaningful talk with his father, he clutches the rock to his chest, admitting that the Gongshi is gripping him. It’s a sharp and poignant reminder that vast wealth can corrupt even the most deserving, especially in the materialistic world of today.

Joon-ho has established himself as one of the most insightful filmmakers when it comes to class struggle. Upon viewing Parasite, I couldn’t help but notice there’s reminiscent’s of Kore-eda Hirokazu’s Palme d’Or winner Shoplifters (2018). Taking the social class commentary to areas explored in Chang-dong Lee’s Burning (2018), the director successfully highlights the symbolic relationship between the rich and the poor. It possesses many questions regarding the hierarchical structures created by the wealth gap. Especially the inhumane treatment and inequality of lower-class amongst the wealthy. A particular scene Mr Park’s young son casually comments on the Kim’s unpleasant odour. Such a trivial act, yet ignorant and disturbing how empathy has vanished in modern society. 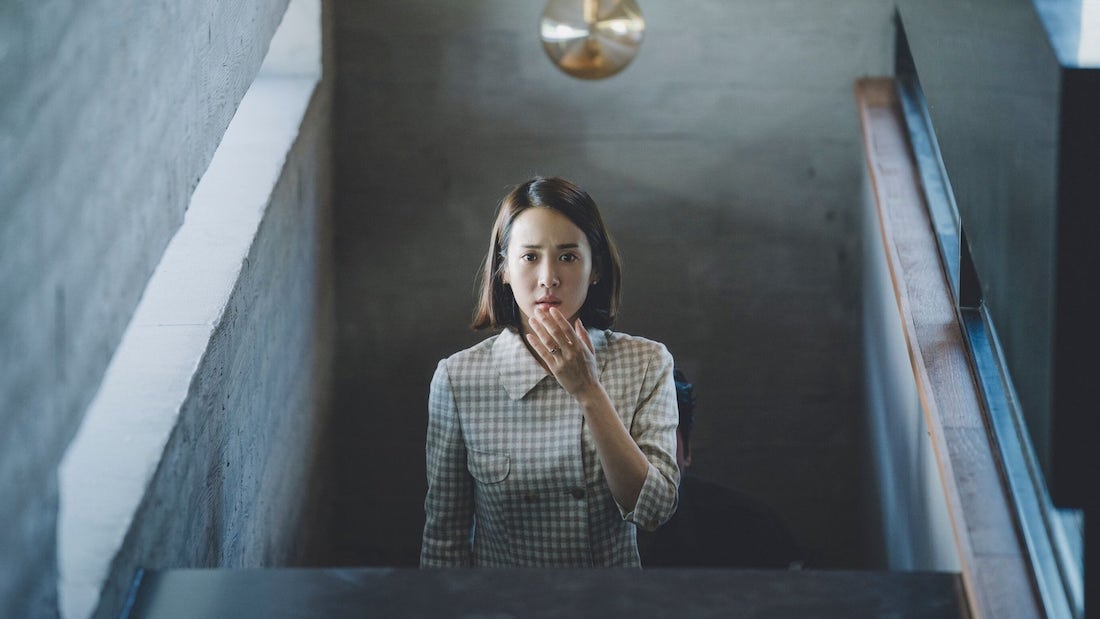 A spectacular and beautifully captured scene sees the Kim family flee from the Park’s family mansion. In the pouring rain, they race further and further down the hill into the slums of the city. Only to find their basement apartment flooded with sewer water. The Kim’s are the underbelly of society living beneath the wealthy suffering inhuman treatment. Joon-ho has chosen a social issue to explore in an entertaining yet angry fashion. As surprising as the narrative is, Parasite doesn’t rely on an M. Night Shyamalan-style twist to perfect its landing. Instead, it delivers a sobering truth that in order to get to the top, you have to climb over others. A notion that is dangerously frequent in this ‘dog eat dog’ world.

Amongst its commentary, Parasite is thoroughly a visual movie thanks to geometric cinematography from Joon-ho’s old collaborator Hong Kyung-pyo (Okja). Before the third act revelation that reveals a plot twist of horrific proportions, the camera moves as if in a horror picture. A personal highlight of mine, he captures each scene in the Park house with kinetic precision. The simplest of camera angles and use of lighting create an almost dreamlike quality of the mansion. Assisted with the beautifully crafted production design of Ha-jun Lee (The Housemaid), the gritty style of the Kim’s family basement apartment enhances the difference of class systems perfectly. The editing also is exquisitely detailed, a sequence after a flood juxtaposes the lives of the haves and have-nots. 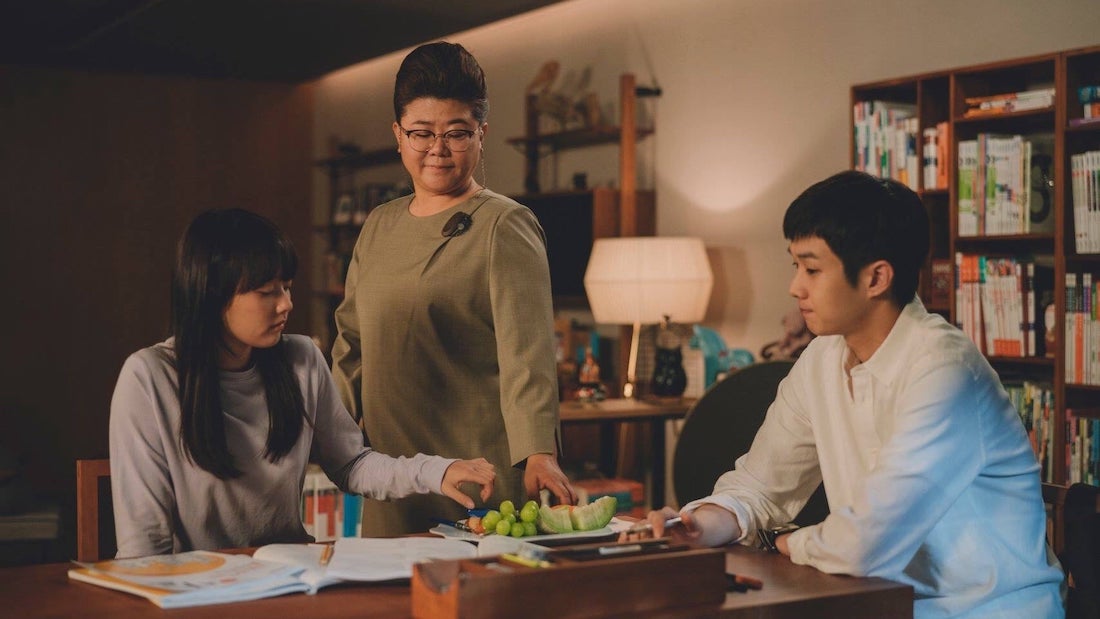 The orchestral score by Okja composer Jae-il Jung can’t go uncredited. It often evokes highbrow culture that creates an amusing contrast to the slapstick comedy—especially during a family fight over a phone. Yet Joon-ho effectively manipulates it to compliment the storytelling and empathy for the characters, whilst enhancing an odd yet hypnotising vibe. Occasionally it wouldn’t match the situation, often installing fear or anxiety when nothing of relevance is happening. However, the sense of unease eventually pays off as the feature progresses.

As thought-provoking and relevant the subtext of the story is, Parasite isn’t without its flaws. Perhaps it would be received differently if I was fluent in Korean, true, but several lines of the dialogue seemed unnatural. Almost cartoonish, the acting seemed artificial. I understand this is Joon-ho’s take on social satire, but during early moments the execution was unconvincing and beats were predictable. How Ki-woo would soon bring his sister into the scheme, thus bringing in the entire family. The Park family returning home from their camping trip after a thunderstorm. The story beats often felt formulaic. A pet peeve was the addition of a sex scene with the Park parents on the sofa as the Kim’s hid underneath that made no contribution to the plot. Thankfully these minor flaws occur early and become less noticeable as one is submerged into the plot.

Parasite constantly proves that it’s not a movie that fits neatly inside one genre. The magic of Joon-ho is that he dabbles in all genres so confidently. The director takes his audience along for a twisted ride that’s sure to get under your skin. Fantastically orchestrated and beautifully filmed, it’s a finely crafted picture that’s genuinely gripping. Beginning as a dark comedy, segueing into tragedy, it’s truly a story of two halves. Along with being scary, exciting, entertaining, and rather unpredictable, Joon-ho chooses a social issue to explore in a way that’s entertaining but horrifyingly relatable with countries across the globe. 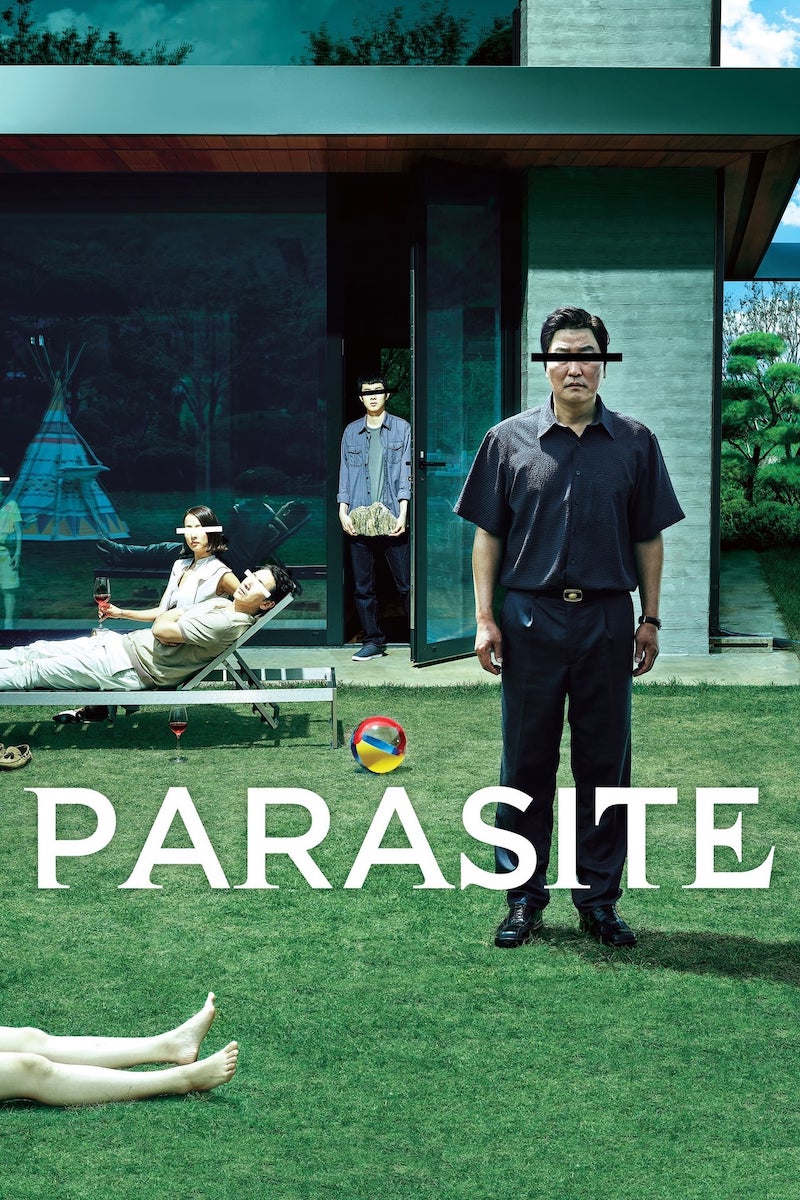