Now that Star Trek: Discovery’s up and running, “The Butcher’s Knife Cares Not for the Lamb’s Cry” delivered an hour that’s probably a better representation of what this series will be each week. There were two plots: a ‘mission of the week’ for the crew of the USS Discovery, and a continuation of the serialised storyline with the Klingons. Both worked nicely, and I’m increasingly invested in where things are headed. I just hope the Discovery will get involved in missions unrelated to the war effort, as it would be a shame if the show sticks to a militaristic vibe. It worked in potent doses during Star Trek: Deep Space Nine, but it would be a shame if these characters didn’t encounter situations unrelated to the war.

A few things became a little clearer this week. Captain Lorca (Jason Isaacs) sure isn’t your typical Starfleet officer, in the sense he’s dedicated to winning this war and seems to have less time for anything else. I guess there are some parallels to Sisko in DS9. His temperament’s understandable considering Starfleet’s six months into an escalating conflict with the Klingons, but was he always like this? It would be great to get some background on Lorca, to see what he was like before the outbreak of war. But right now it means we have a captain determined to defeat the Klingons using any means necessary, and that doesn’t always sit right with his crew of trained explorers. In one scene, Stamets (Anthony Rapp) complains that he’s a man of science, not a soldier, and the same applies to characters like sensitive alien Saru (Doug Jones) and timid cadet Tilly (Mary Wiseman). This war has come out of nowhere, and isn’t what many of them signed up for. 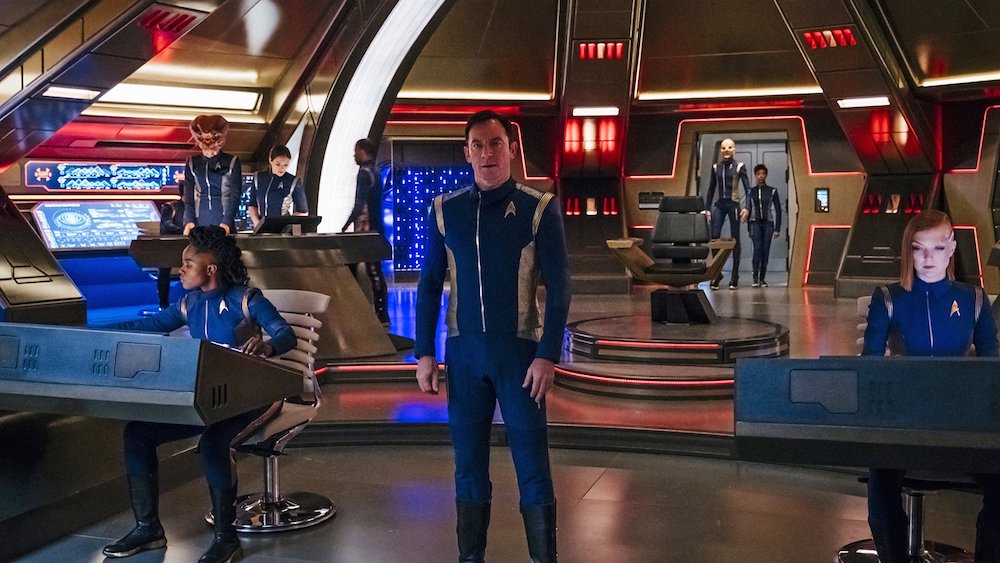 It’s no wonder Lorca wants Burnham (Sonequa Martin-Green) to help him, as her reputation suggests she’s more on his wavelength. However, the truth is winning the war is more a chance for atonement for Burnham. She has an open mind and helpful attitude, which actually makes her a great bridge between aggressive Lorca and his scholarly crew.

This was demonstrated this week in Burnham’s interactions with gruff Security Officer Landry (Rekha Sharma), who’s exactly the kind of no-nonsense loyalist Lorca wants on his ship during wartime, but whose inflexibilities led to her own stupid death. It all started when Burnham was tasked with “weaponising” the “monster” that slaughtered the crew of the USS Glenn last week, which Lorca’s beamed aboard Discovery to take pride of place in his ‘war room’ of trophies to study and help defeat the Klingons. Burnham made quick progress with her research, theorising that the creature (nicknamed “Ripper”) is actually a macroscopic ‘tardigrade’ that only attacks when it feels threatened. Not only that, but it exists in symbiosis with the spores the Discovery’s “spore drive” uses to warp-jump across the universe, and is thus a key navigational component of the system. Unfortunately, Landry had no time for Burnham’s theory and assurance the creature is naturally benign, wanting only to cut off its claws for analysis, which resulted in her being mauled to death. 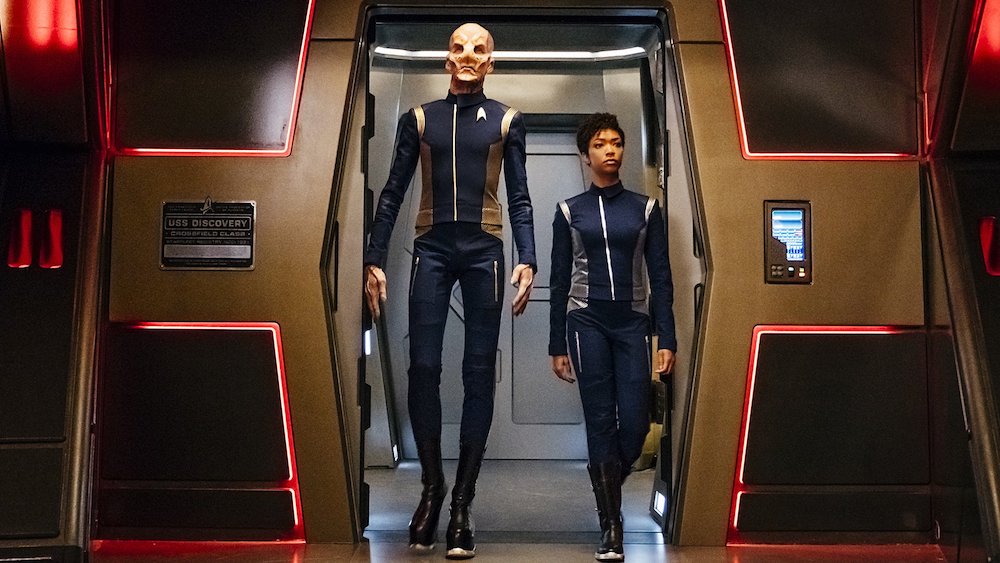 In a lot of ways, this was all classic Trek fare. Science and optimism triumphed over fear and prejudice. Burnham not only managed to tame a misunderstood monster, but in the process solved how to get the spore drive working: you beam the tardigrade to engineering after it’s feasted on spores, and plug it into the navigation computer to scan its brain for locations. And in so doing, the USS Discovery was able to jump to the remote Federation outpost of Corvan II and prevent the colonists being wiped out by dive-bombing Klingon Birds of Prey.

Elsewhere in “The Butcher’s Knife Cares Not for the Lamb’s Cry”, we caught up with the Klingons themselves. I already like how the show’s giving us two sides to this war story, as it means we get a fascinating look at Klingon culture and how their society operates. Voq (Javid Iqbal) and his aide L’Rell (Mary Chieffo) are still trapped aboard T’Kuvma’s disabled ship, floating in space with a crew slowly dying of hunger. They haven’t even participated in the war they helped trigger months ago, oddly.

L’Rell eventually convinces Voq to swallow his pride and scavenge the USS Shenzhou for a critical part they need to get their ship working, but the return of Kol (Kenneth Mitchell) unravelled their plan after he won the loyalty of Voq’s crew by filling their bellies with provisions. As a final ignominy, Voq was beamed aboard the husk of the Shenzhou to die alone, although it turns out L’Rell only pretended to side to Kol to spare Voq’s life and has a plan to turn him into the unchallenged leader of the united Klingon Empire. 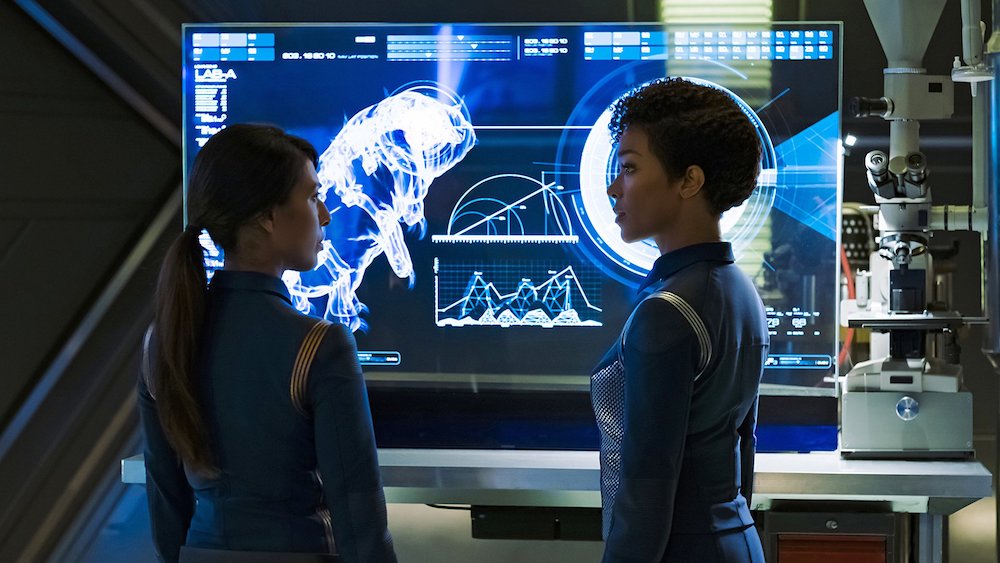 I’m enjoying these Klingon scenes. The extensive use of subtitles makes them feel more alien than ever before, and the mention they ate dead Captain Georgiou was a ghoulish touch. Voq’s an interesting and sympathetic character, as an albino lower-class Klingon without a House, who lucked into becoming T’Kuvma’s successor as “torchbearer”. His relationship with L’Rell also developed nicely this week, as it’s clear there’s feelings between them that could turn romantic. And for Klingons, that of course means a fight.

It’s just great to spend such a long time in the company of “the enemy”, as these scenes give an insight into how Klingons perceive the Federation and their own struggles to win this war. It reminds me of how the narrative flits between different perspectives in Game of Thrones, actually. It’s therefore probably not coincidence how Voq’s essentially Discovery’s version of Jon Snow from Game of Thrones; a “bastard” trying to unite the disparate Klingon Empire (or “wildings”), to defeat a common enemy beyond the border (or “wall”) of Klingon territory. L’Rell has even become Star Trek’s take on Ygritte, one might say. 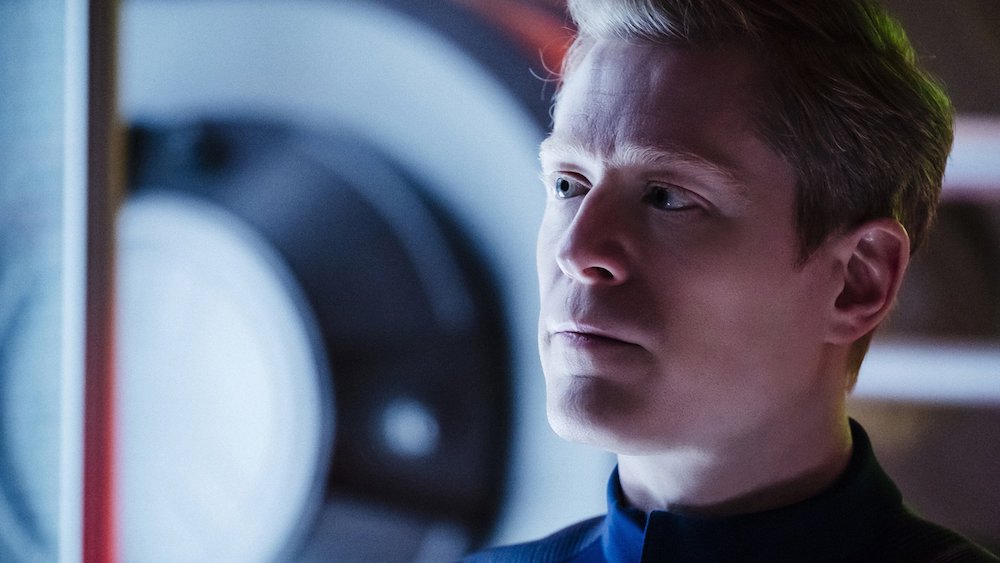 Star Trek: Discovery is also continuing to surprise me in some cool ways, not least having Landry die in this episode from her injuries. I haven’t paid too much attention to who’s a confirmed “regular” in the cast, but had assumed Rekha Sharma was here for the long haul. But she’s been written out just four episodes in, and that keeps you on your toes! Previous Star Trek series were very unlikely to kill off a main character, with a few exceptions (like Tasha Tar from Star Trek: The Next Generation), but it already feels like nobody’s safe on this new show. But as one character left the stage, another entered in the shape of Dr. Hugh Culber (Wilson Cruz), the chief medical officer. He didn’t get much to do, beyond fix a broken nose, but I like how these introductions are being spread out. We’re still to meet Shazad Latif’s Ash Tyler, billed as a main character.

Overall, while “The Butcher’s Knife Cares Not for the Lamb’s Cry” was a little cluttered in places, I continue to enjoy how Discovery is going about its business. This story brought classic Trek values to the forefront of the episode, in terms of Burnham using her intelligence and objectivity to prove people are wrong to perceive the tardigrade as a “monster” due to appearance and one instance of behaviour. A big threat last week became their salvation the next, which was great.

There were also some solid emotional beats here, particularly when Burnham summoned the courage to activate Captain Georgiou’s Last Will & Testament (meaning we got another appearance from Michelle Yeoh, for a touching scene that further underlined their mother-daughter dynamic). But I also enjoyed the deep connection forming between Voq and L’Rell, who seem equally determined to rise to power and become a formidable duo. The echo between mutual outcasts Voq and Burnham is also very cool–the former a pariah without a House, the latter a pariah without a rank.

THE TIME TRAVELER’S WIFE – Season One