When we return to Boston in 1956 it’s clear, from the title alone, “All Debts Paid”, that this episode of Outlander is going to settle several outstanding accounts. As I mentioned last week, Diana Gabaldon’s book Voyager, on which this third season’s  based, is told largely from Jamie’s (Sam Heughan) point of view. In the series, a satisfying corollary to this is the focus on Frank Randall (Tobias Menzies) and the time taken to fill in the backstory of his marriage to Claire (Caitriona Balfe) after their move to Boston. Gabaldon made Frank a rather unpleasant character, but the series has refashioned him into a far more sympathetic one.

Claire does outlive Frank, as we know from last season’s finale, and “All Debts Paid” brings us to that particular crisis in the Randall household, concluding a stormy passage through a marriage torn by parental duty, devotion to separate careers and, sadly, living separate lives. Writer Matthew Roberts weaves an emotionally powerful story for Frank, who’s still very much in love with Claire, and he also dares to show Claire in a slightly different light, one that illuminates some not quite so pleasant aspects of her character. 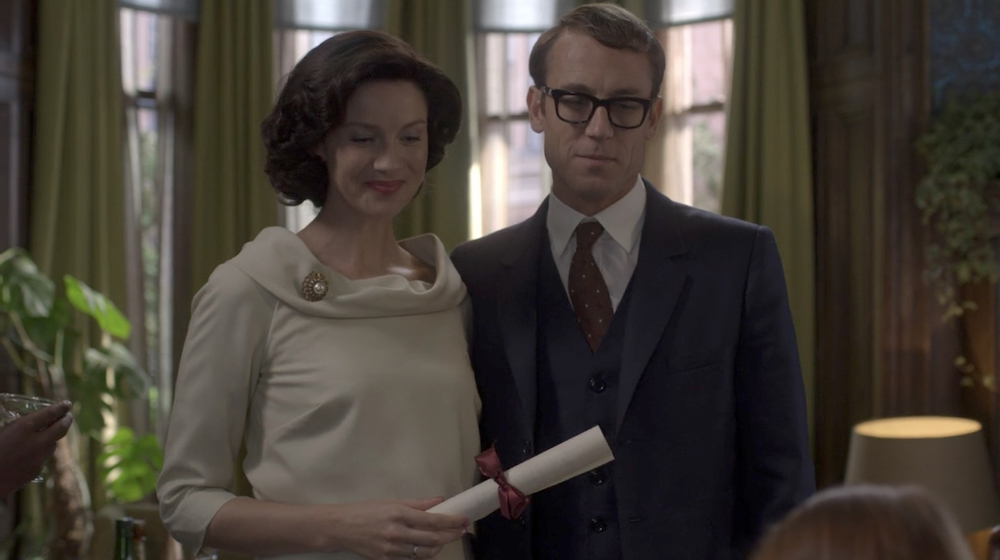 It’s the subtle things, as well as the raw emotional battles, that sketch out the dying of the light in the Randall marriage. At breakfast, an allusion to the differences between American and English culture, and Brianna’s upbringing, fires Claire’s desire to go to the movies with Frank. Sadly, it forces Frank to admit he’s already seen her choices of either The Searchers or Carousel because, as they agreed, he was free to see someone else. Tobias Menzies and Caitriona Balfe brilliantly capture this deflated realisation, on the part of both characters, that the Randall marriage has become, beyond everything, merely an arrangement. Claire simply thanks him for being discreet and throws tiny, unsettling glances to Frank as Brianna (Gemma Fray) bounds in with her latest drawing.

However, this escalates into bitter recriminations over a simple matter of timing at Claire’s graduation party in 1958. A rescheduled restaurant reservation reveals that Frank arranged to meet Sandy (Sarah MacRae), the history graduate he’s seeing, while Claire and her friends were out. It’s a horrible mistake that confirms to all assembled guests that the picture of the Randall marriage isn’t so perfect after all. After Claire lashes out at Frank for this indiscretion, he assures her that their colleagues and friends are very much aware their marriage is one of convenience. “You’re not as good an actress as you think you are,” he observes. 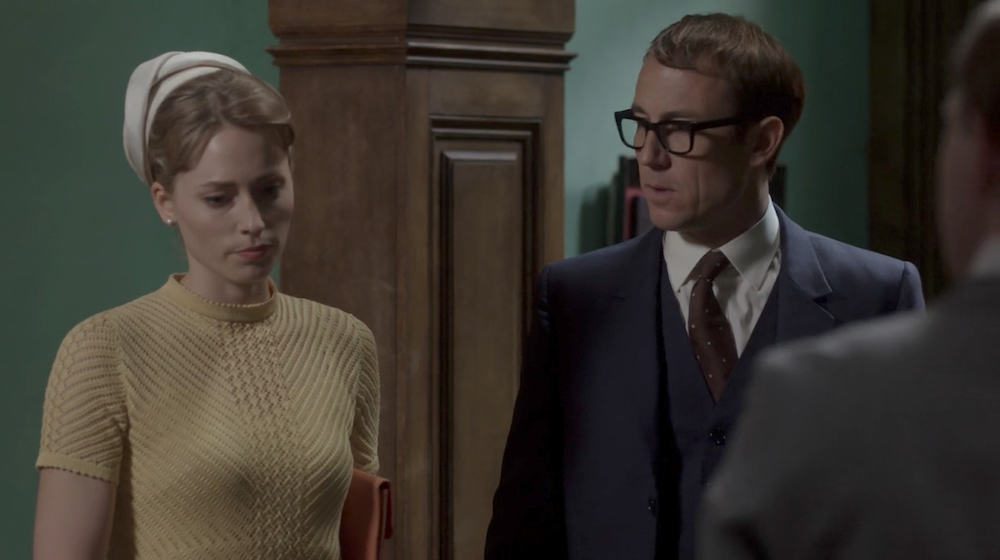 Frank certainly touches a nerve when he accuses Claire of jealousy. The shoe is definitely on the other foot in this confrontation, and Frank confesses that “maybe I wanted to give you a taste of your own medicine, Dr. Randall.” Physician, heal thyself. Frank suggests their marital bedroom is “far too crowded already” to support any notion that he’s made love to Sandy there. What’s painful is that Claire doesn’t allow Frank to have the happiness of a loving relationship outside their marriage, and he eschews divorce to stay with her out of devotion to their daughter Brianna.

We reach Brianna’s 16th birthday (now played by Sophie Skelton) and then her own graduation in 1966. Claire’s kept her love for Jamie alive vicariously through Brianna all these years. Frank now seeks his divorce. He wants to marry Sandy and move back to England. Having paid his debts in full, and with Brianna a grown woman, he wants to live the rest of his life “with a wife that truly loves me.” He asks if, without Brianna and over time, she could have forgotten Jamie? “That amount of time doesn’t exist,” she tearfully explains. By the time Frank’s been killed in a car accident, Claire’s declaration of love seems rather hypocritical. A truly exhausted Frank has discharged his duty but sadly does not get happiness as his reward. 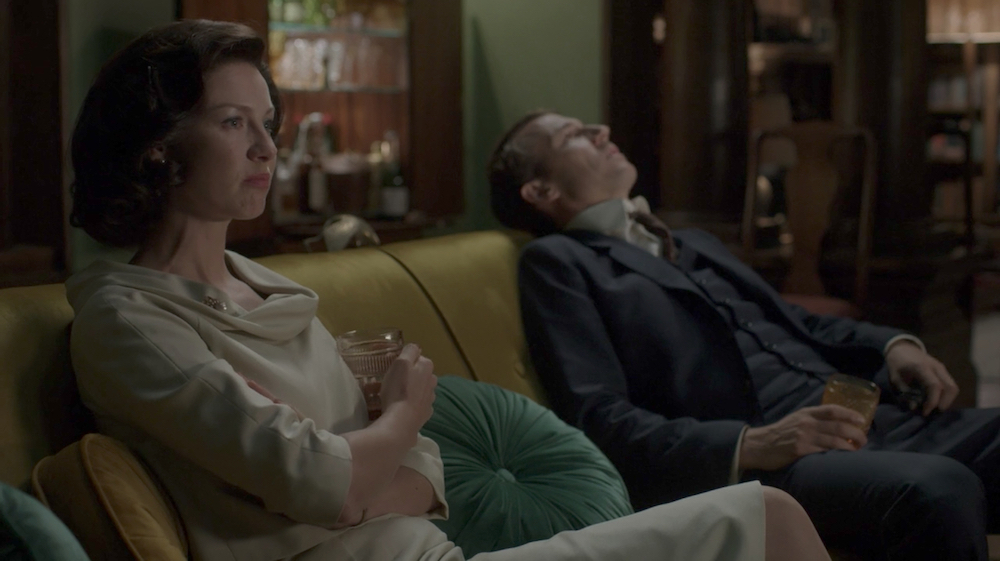 At Ardsmuir prison in 1755, Colonel Harry Quarry (Jay Villiers) assures his replacement Major John William Grey (David Berry) that the list of wine merchants he’s left will supply something to keep out the cold, while trying to fill his time hunting for grouse and seeking the hidden gold that Bonnie Prince Charlie left behind in Scotland. Presumably, this is a reference to the Loch Arkaig treasure, six caskets of Spanish gold that remained from a shipment sent to support the Jacobite uprising but then left in trust to Macpherson of Cluny after Culloden and Charles left Scotland. Not all of the gold found its way back to Charles and there’s a convoluted history of various attempts to recover it.

The treasure’s recovery would elevate the status of its finder in the eyes of the Crown, and Grey files this away for future consideration as Quarry confirms that “society” in this cold, damp prison will consist of conversation with his fellow officers and one prisoner, a certain ‘Red Jamie Fraser’. Grey’s sympathies are evident from the start as he regards the bedraggled, chained Jamie, once called “the very devil himself” by terrified redcoats, as merely a “poor devil now.” 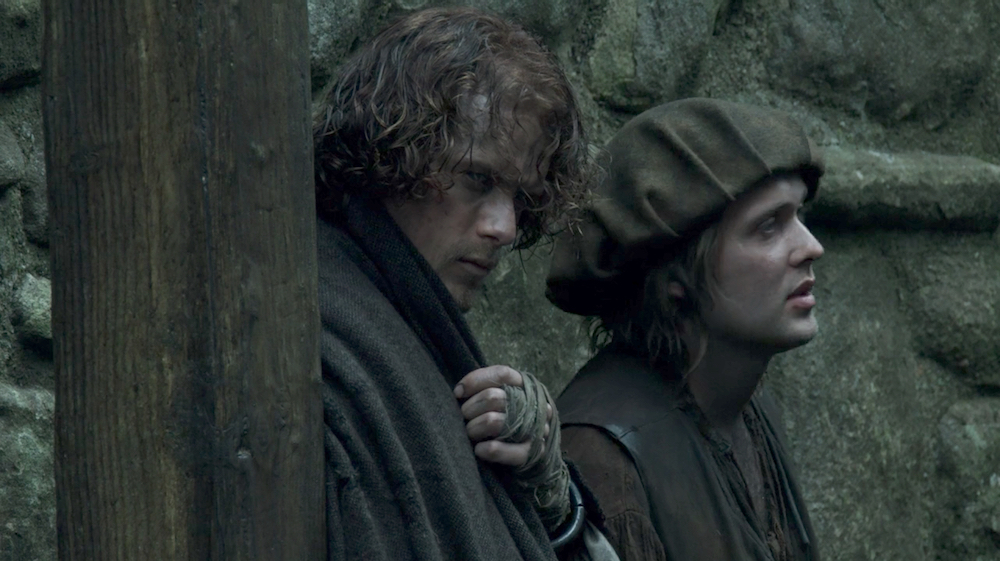 Known as ‘Mac Dubh’, Jamie represents his fellow prisoners and petitions Grey for better conditions and medical attention, particularly for his friend Murtagh (Duncan Lacroix), an ailing survivor of Culloden. Gabaldon didn’t allow Murtagh such a privilege in her books, killing him off at Culloden, but Ronald D. Moore and his writing team have developed the character and made him more pivotal to the ongoing story. While we see him shipped off to the colonies at the end of this episode, Moore’s acknowledged that we’ll catch up with Murtagh again. As he tends to Murtagh’s rat bites with milk thistle, Jamie’s painfully reminded that this herbalist knowledge was taught to him by “a lass who knew a fair amount about healing.” Claire is gone but not forgotten.

Grey eventually takes Quarry’s advice to dine with Jamie, in order to secure his cooperation, and thus begins a growing friendship and respect between them. Roberts’ script allows this development plenty of time and offers two fine performances from Sam Heughan and David Berry. The discussions move from the efficacy of cats for reducing the rat population and, inadvertently, a source of food for the prisoners, to the more intimate and confessional mode of lost loves. Jamie wonders why Grey was sent to replace Quarry as governor, and it’s only later when we get to this heartfelt unburdening that there’s an intimation of what might have happened. 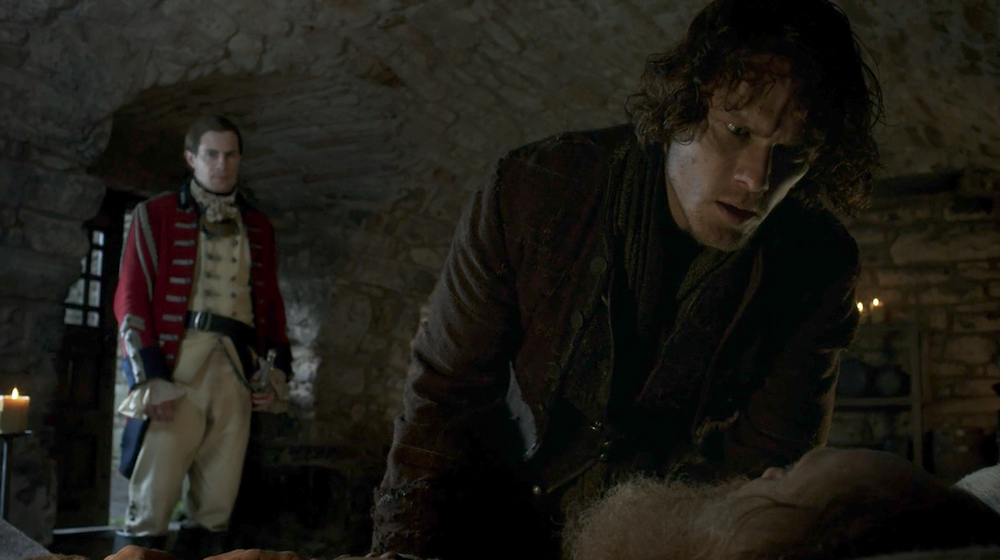 A babbling stranger, Duncan Kerr (Murray McArthur), who wanders in from the moors with talk of cursed gold and a white witch, sets the relationship between Jamie and John Grey off on a different, more personal tangent. Grey asks Jamie to translate the man’s deranged Gaelic and French pronouncements, as mentions of the gold will be of interest to the Crown, and, more importantly, he’ll have Jamie’s irons removed in repayment. Their removal is symbolic, as they represent not just a physical burden but a psychological one, too, freeing Jamie to accept Grey as a friend to whom he can eventually unburden emotionally. Jamie is also canny enough to secure blankets and medicine for Murtagh in exchange for any information gleaned from Kerr.

Duncan Kerr’s prophecies of white witches and selchs connect to our own knowledge of Claire as a traveller from the future. Even Murtagh recognises that this could be a portent of Claire’s return, but Jamie asks him not to think of it, nor of the baby Claire was carrying, as it “will only bring ye pain and suffering”. Clearly, he’s had enough of that. Grey thinks Jamie is holding back information and this constant bargaining between the two men is beautifully and subtly played. Grey recognises something in Jamie, born of a notion that here’s a sensitive man who cares about his friends and fellow inmates, that he can connect to. 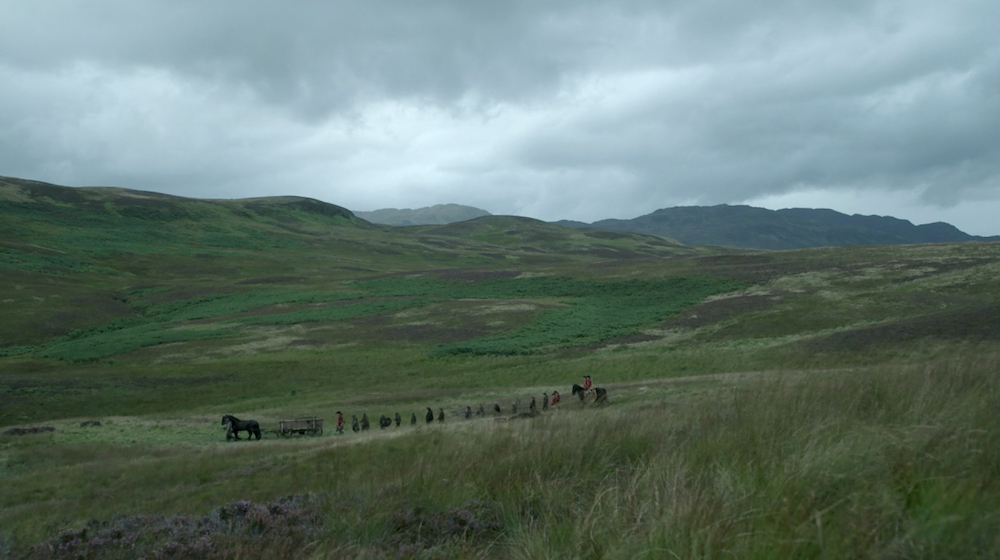 Jamie gains Grey’s confidence and they agree to seek the treasure while the inmates are allowed out to dig for peat and set snares for animals. Jamie has a surprise up his sleeve when he goes missing for three days and then ambushes Grey and acknowledges he has since recognised him. He’s the boy he spared on the night prior to the battle of Prestonpans, the brother of Lord Melton who, in turn, spared the dying Jamie and sent him back to Lallybroch. Fundamentally, the young John Grey vowed to kill Jamie once the debt for sparing his life was discharged. Jamie offers him the opportunity but Grey refuses to murder an unarmed prisoner. Gradually there grows a mutual respect between them and Jamie reveals that Kerr’s rantings about the “white witch” may have been relevant to his wife Claire. He went off in search of her and concludes “There was nothing there to do with her. She’s truly gone.” Of the treasure there is no evidence save for one jewel that Jamie presents as proof of his story.

Later, after Grey has made good his promise to provide medical aid for Murtagh, he and Jamie enjoy a game of chess. Here, Grey confesses he shared Jamie’s death wish after Culloden with the loss of a “particular friend” in the battle. He was Grey’s inspiration and, as the intimate conversation sees Grey reach out for physical affection, we can conclude he was his lover. “Some people you grieve over forever,” he admits. Jamie, still suffering his own loss, recognises their mutual vulnerability and offers, “I think perhaps the greatest burden lies in caring for those we cannot help. Not in having no one in whom to care.” Grey’s own care has allowed Jamie to grieve a little less and, finally, to speak Claire’s name again. It’s a very affecting moment. 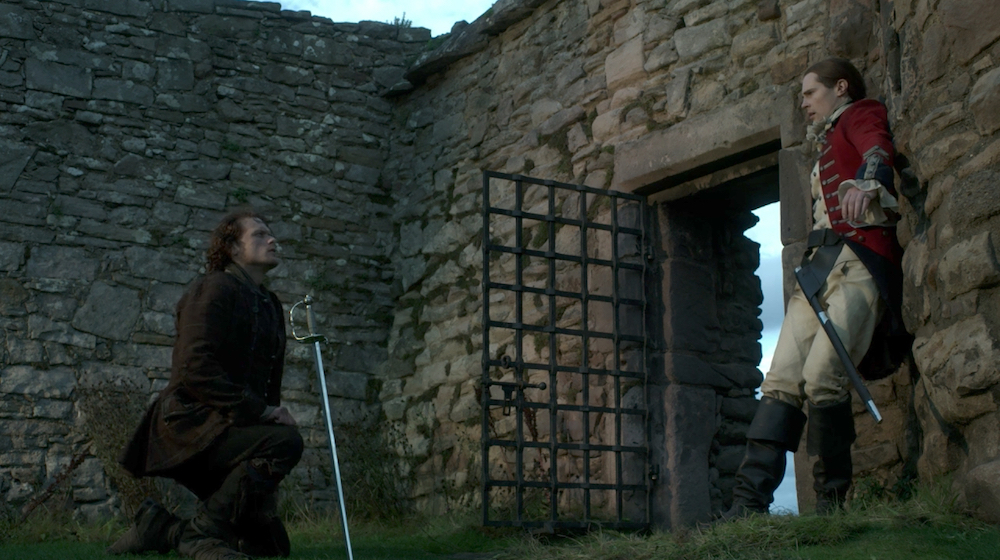 However, it’s unfortunate that Grey chooses this moment to make advances to Jamie. He misjudges the situation and, not knowing of Jamie’s past and his rape and torture by ‘Black Jack’ Randall, this same-sex affection is guaranteed to awaken very painful and angry memories in Jamie. It’s clear that Grey genuinely regrets it, as it undoes all the ties in their friendship. The prisoners are removed from Ardmuir and sent to the colonies, except for Jamie Fraser. As a convicted traitor whose sentence could not be commuted by his Majesty, Jamie’s escorted by Grey to the estate of Helwater to serve Lord Dunsany. He will have to change his name as Dunsany is not disposed towards Highlanders and Jacobite rebels but Jamie’s life has been spared, in another debt repaid by Grey despite his “moment of weakness”.

A beautifully crafted and performed episode, “All Debts Paid” satisfyingly mixes tragedy and hope within its themes of honourable bargains and discharging of debt. Jamie has come to terms with his grief and found a new ally in the honourable John Grey. He has an opportunity to start a new life on the Helwater estate. The rather self-centred Claire is no longer trapped in her marriage to Frank, but poor Frank doesn’t get the life he hoped for. Balfe and Menzies were superb and the series will clearly miss Menzies now that both his Randall alter-egos are dead. However, the real strength of the episode is in the subtle playing between Heughan and Berry, forging the complex friendship between Jamie and John Grey.