For Claire (Caitriona Balfe) and Jamie (Sam Heughan) to separate once, nay twice, in a season is rather a misfortune, but to be split apart again at the end of “The Bakra” is looking like sheer carelessness. Although Outlander thrives on episodes that flip between the separate exploits of its main characters, this season it’s become an overused and somewhat repetitive way of driving the story forward.

“The Bakra” is a episode that stumbles over itself as it tries to cram in as much of Diana Gabaldon’s Voyager, rushing to conclude the series via some rather risible subplots about slavery, sapphires, and occultism. The more intimate, nuanced aspects of Outlander are, this week, put to one side in favour of an 18th-century penny dreadful. There were always going to be issues about racial stereotypes in the series and it’s clear the writers have been cautious, thus far, but “The Bakra” fumbled and misjudged some of these elements. 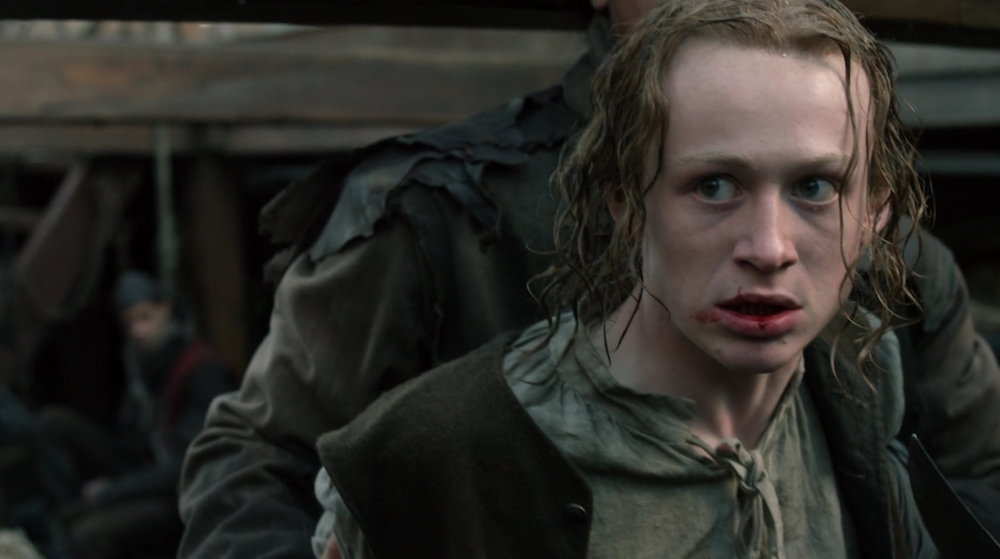 The sense of contrivance merely acknowledges the changes made from the book. In Voyager, it’s only when Jamie reaches Jamaica and the Governor’s Ball that he reveals the existence of his son Willie and, likewise, Claire meets Lord John Grey (David Berry) before reaching Jamaica and while she’s tending to the sailors on the Porpoise. For Gabaldon’s readers, to have these important scenes shifted to either end of the series might be asking too much to accept. I still think the anticipated complexities of Claire’s relationship with Grey are there in “The Bakra”, and Balfe plays Claire’s suspicions and confusions well during Grey’s reunion with Jamie, but we don’t get very much of it as the episode’s too busy setting up its occult subplot and uneasily trying to pay lip service to the issue of slavery. 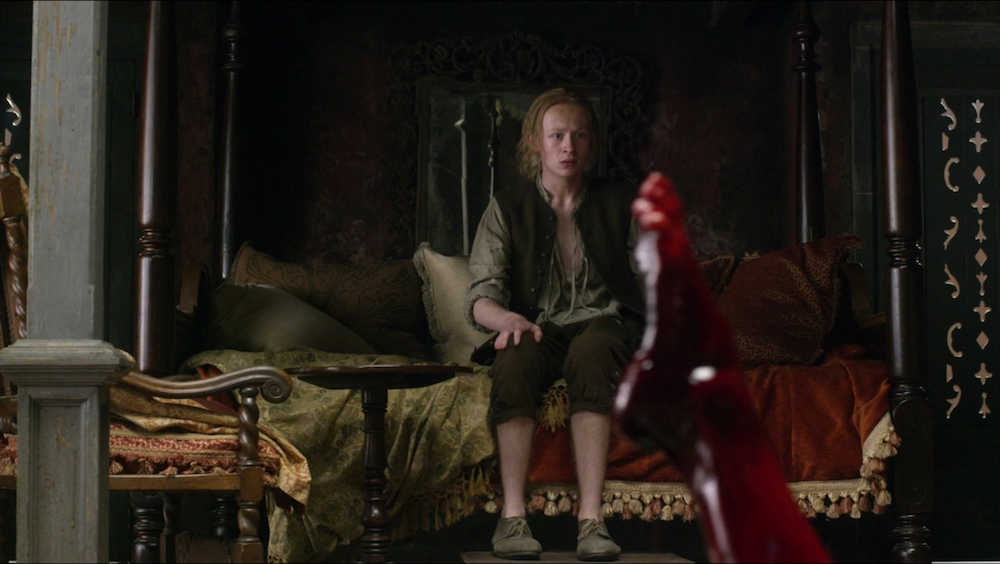 The episode begins with young Ian’s (John Bell) perspective as he is kidnapped by the crew of the Bruja after finding the hidden treasure on Silkie island. We hear mutterings that he’s destined to be handed over to the Bakra, whom apparently has a penchant for young lads. When he finally ends up languishing in a cell in Jamaica, Ian discovers that these boys meet an unexplained fate. He’s taken to a bedroom and meets said Bakra as she emerges from bathing in goat’s blood, rolling back the years by taking a page from the notorious Countess Elizabeth Báthory’s book because, after all, “protein and iron keeps my skin young.”

It’s revealed, as the blood is washed away, that the Bakra’s none other than Geillis Duncan (Lotte Verbeek). Again, this scene is rather over the top (and doesn’t originate from the book) in the way it introduces the very woman we assumed had been put to death for witchcraft back in Cranesmuir during “The Devil’s Mark”. Geillis plies young Ian with tea and cake, as one would being a supernatural force of nature, and drugs him into explaining why one of the three sapphires is missing from the recovered treasure. With a taste for virgin boys, she eyes Ian up as her next victim despite his protests that he’s no longer a virgin. She’s also rather pleased to know that his uncle, Jamie Fraser, is responsible for the missing jewel and is on his way to Jamaica in search of the lad. We’ll get to her bonkers use of magic to restore the King of Scotland to the throne in a minute. 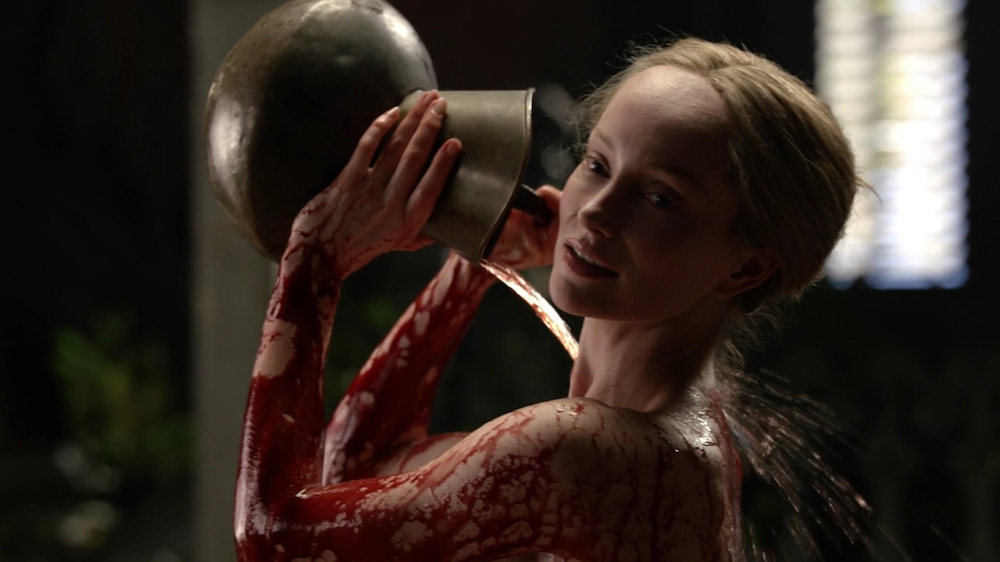 In Kingston, Jamie and Claire learn of Ian’s fate from one of Cousin Jared’s contacts and that the slaves on the Bruja were sold to the governor. Claire, disgusted at the treatment of the slaves at the slave auction, allows her outrage to get the better of her and spoils for a fight with the salesman using her parasol. Somewhat ironically, her well meant protest results in Jamie having to buy a slave, Temeraire (Thapelo J Sebogodi), as a means to this end. He promises Claire they’ll give him his freedom when they can arrange it, keeping him from being recaptured in Kingston. To add to this absurdity, Jamie then employs Temeraire to use his knowledge of the island and its slave traders and track down Ian by working the Governor’s Ball to which they’ve all been invited.

The Governor’s Ball, all powdered wigs (even Jamie sports one), champagne and fortune-telling with Kingston’s elite, brings Jamie up to speed on Lord John Grey’s progress and, most importantly, how Jamie’s son Willie is faring. Claire is clearly disturbed by the sublimated attraction between the two men, especially when Grey flashes the missing sapphire at Jamie, pinned to his waistcoat, and announces he has treasured it all this time in remembrance of their friendship. Perhaps they should get a room. 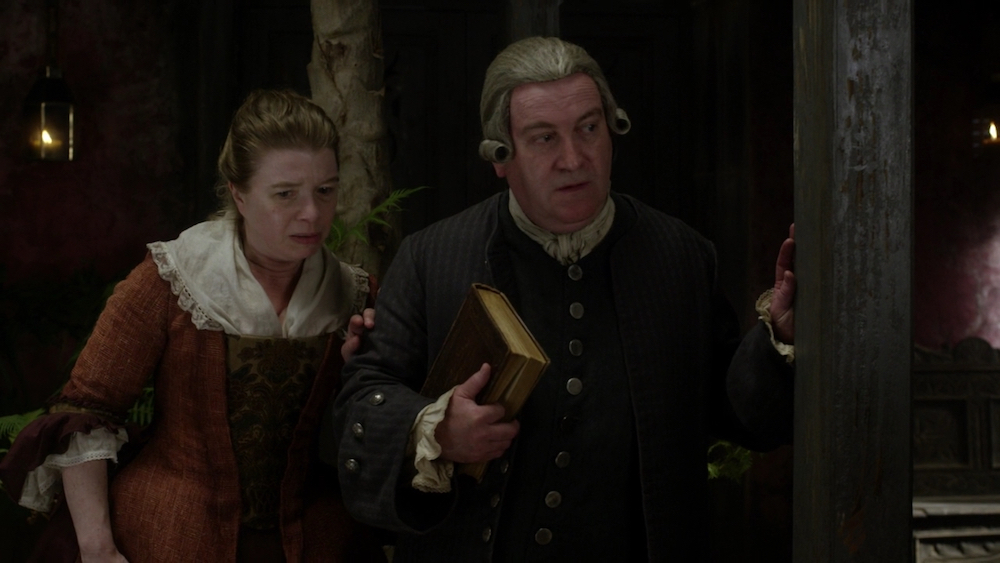 Geillis has employed Margaret and Archibald Campbell (Mark Hadfield) to invoke a magical prophecy using the three sapphires. Margaret (Alison Pargeter) appeared in flashback in last week’s episode, and we knew they were bound for the West Indies, so it’s no surprise to meet them again. It now seems Margaret’s abilities as a seer are intrinsic to Geillis’s mad scheme to secure Scotland’s future sovereignty. However, when Geillis is spotted by Claire at the Ball, she first has to explain how she managed to cheat death. Again, it’s all a bit ‘The Perils of Pauline’ and confers an info-dump of such melodramatic proportions that her perverting the course of history seems like an after thought.

Apparently the authorities very magnanimously allowed Geillis to bear Dougal MacKenzie’s child before intending to hang her for witchcraft. Dougal promptly bribed the hangman to substitute some poor dead grandmother in her place. Marrying a rich plantation owner, she settled in Kingston as Mrs. Abernathy (I wonder if there’s a connection to the Joe Abernathy of Claire’s future…). Claire mentions that they’re in Jamaica to find the young Ian, and Geillis volunteers to assist while actually keeping mum about her possession and abuse of Jamie’s lost nephew. 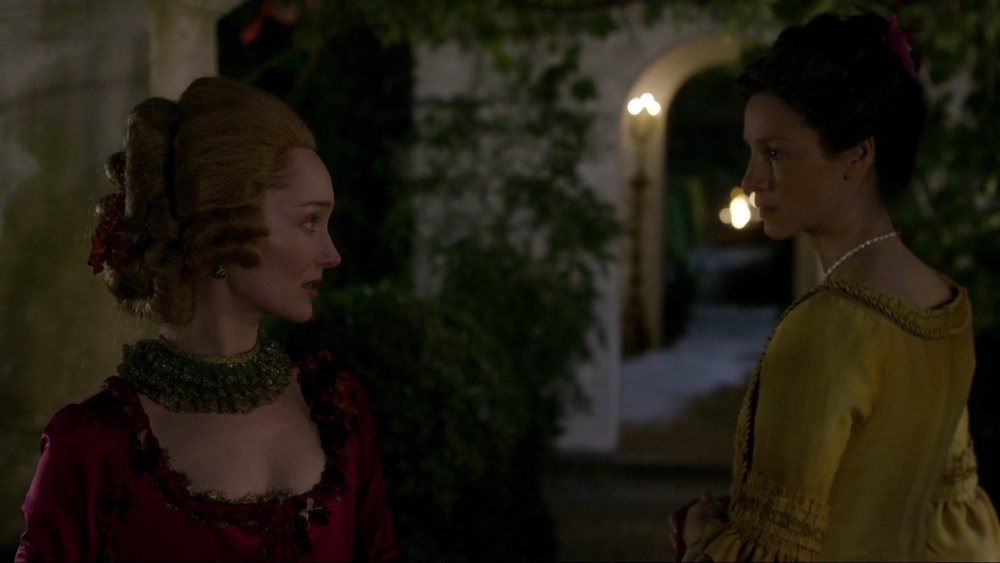 Before the episode reaches its point of no return, it’s worth praising a little scene between the poor Margaret, sidelined by her brother Archibald after chastising her for telling fortunes without getting payment, and Mr. Willoughby (Gary Young). Willoughby seems to recognise she’s as much an outsider in this world, having been mistreated by her brother, as he is. Margaret describes Willoughby as “a rare soul” and in sympathy he offers that she’s “rarer still.” It’s a moment of calm in a gaudy episode and suggests a gentle understanding between two isolated souls, with him seeing her as “Yi Tien Palova,” (flower from heaven) to his Yi Tien Cho (leans against heaven).

Geillis spies the missing sapphire hanging off Lord Grey’s coat and contrives to hold a fortune-telling session in which Grey reluctantly participates. Now that all three sapphires are together, Margaret utters her bizarre prophecy:

When twice 1,200 moons have coursed between man’s attack and woman’s curse, and when the issue is cut down, then will a Scotsman wear a crown. 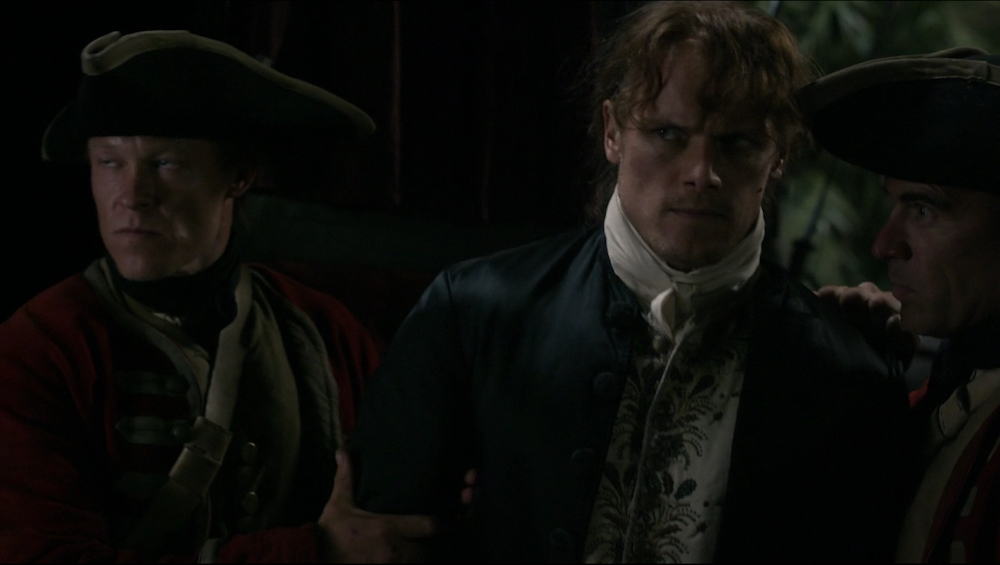 Grey is flummoxed by this “peculiar pastime”. Archibald translates the prophecy to Geillis as one proclaiming: “A new king will rise in Scotland upon the death of a child that’s 200-years-old upon the day of its birth” and this only fuels the absurdity piling up in the episode. Geillis might crack a Benjamin Button joke at Archibald’s expense but the only 200-year-old child I can think of is Claire and Jamie’s daughter. Is Geillis going to try and kill Brianna?

The episode rushes to a close as Temeraire reveals to Claire and Jamie that Ian was taken to a Mrs. Abernathy. As they set out to confront Geillis and rescue Ian from her estate, freeing Temeraire on the way, Captain Leonard (Charlie Hiett) arrives at the Ball and promptly arrests Jamie for murder and treason before they can leave. As Jamie is taken away, it’s left to Claire to confront Geillis and find Ian. The Frasers go their separate ways again at the conclusion of a rather overwrought, florid episode that reveals more about Outlander’s weaknesses than its strengths when it comes to character and plot.

YOU, ME & THE APOCALYPSE – ‘Episode Five’