A man tries to rise in his company by letting executives use his apartment for trysts, but complications and a romance of his own ensue...

Christmas is getting closer, and so is the moment you’ll have to make a decision on what gift to buy for your mother. Well, I know what I’m getting mine: Arrow Films is releasing a new restored version of The Apartment (1960), and it couldn’t come at a better time. This is a true masterpiece of American comedy, featuring a stellar, an unparalleled performance by protagonist Jack Lemmon, many memorable scenes that still make you laugh (or break your heart), and all-round great scoring, editing, writing, and most of all directing by the legendary Billy Wilder.

Most of my film-related childhood memories involve either me watching a Disney cartoon or The Blues Brothers (1980) for the hundredth time, or my mother watching a Jack Lemmon comedy. Even though I was soon won over by The Odd Couple (1968), Some Like it Hot (1959), and Grumpy Old Men (1993), I couldn’t seem to get myself to like The Apartment. Needless to say, my mother absolutely loved it, but to me its humour was too distant from the slapstick, silly playfulness of the comedies I’d grown accustomed to. Its characters were certainly not typically fabricated caricatures, and that didn’t make me laugh as much as I wanted. Why was my mum trying to sell it as a classic comedy? I was having none of it. 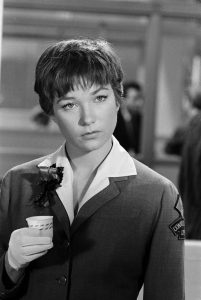 This refusal to acknowledge any of the film’s merits lasted well into my teens, when I finally had the chance to watch it again with new eyes. Despite the granite-solid (that is to say, obtuse) confidence teenagers hold in their convictions, The Apartment made a breach this time. I could better appreciate the romantic triangle involving insurance worker C.C. “Bud” Baxter (Lemmon), his manager Jeff Sheldrake (Fred MacMurray), and their mutual love interest, lift operator Fran Kubelik (Shirley MacLaine). Even the Christmassy moments and New Year’s Eve parties made more sense: their mundane, loud, socially frivolous frolics are clearly counterposed by Wilder with scenes of self-sacrifice, generosity, love, and discontinuity with the past, truer to the holiday spirit. I could also understand the irony of it all, as I was more open to observing the masterful setups and pay-offs that enrich the film on many different levels. All this turned out to be much more enjoyable than any one-off jokes. In short: I had matured.

This is what The Apartment is about: becoming a better person. It starts with Baxter slogging all day and night at his alienating office in New York City; he’s only one of the many thousands employed there, but has an ace up his sleeve. His apartment, just a few blocks away from Central Park, is particularly popular with his managers, a bunch of married corporate pigs who take their secretaries out and need a safe den for their dirty deeds. Baxter doesn’t mind it too much because he’s playing the long game. He knows that, sooner or later, he’ll be repaid with a much sought-after promotion. At least, that’s what he’s telling himself. The reality is that his bosses never hesitate to take advantage of the situation, and he bows his head to them every single time; his aspiration is a justification for his cowardice and, on a deeper, darker level, a mask for his profound loneliness. 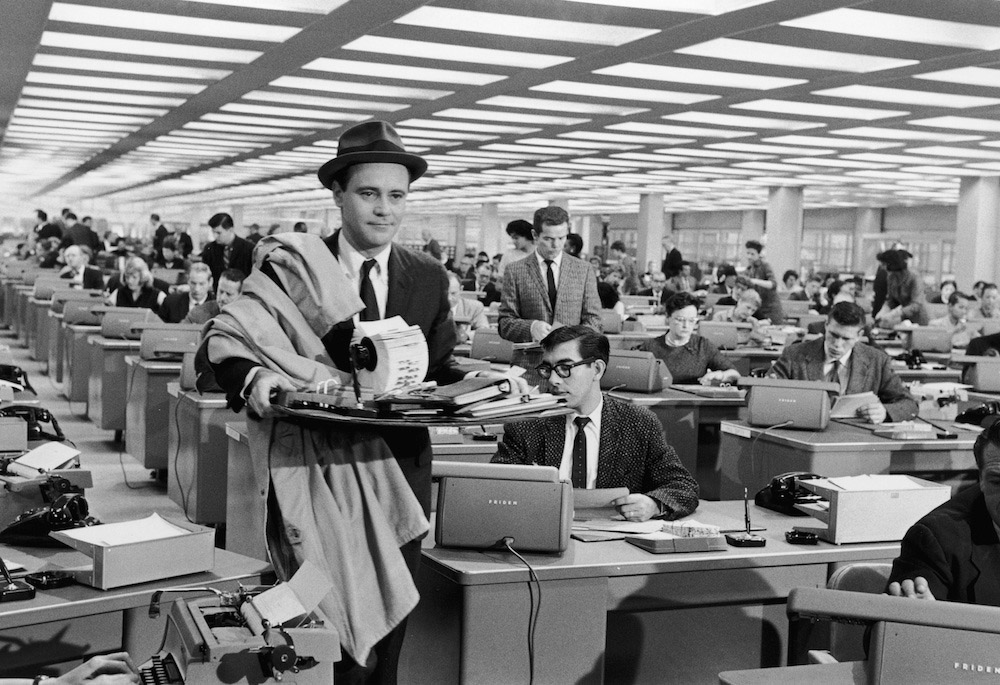 When his moment finally arrives, Baxter is summoned by Director of Personnel, Mr. Sheldrake. Still rubbing his hands in expectation, he’s first praised by Sheldrake, then interrogated about his popularity among managers and, eventually, unceremoniously made to confess his game. After reprimanding him as any righteous manager would, Mr. Sheldrake has one request: there’s this woman he’s seeing… and he could really use Baxter’s apartment. As we, the audience, see the irony of the situation and hold our heads in contempt, Baxter bows his once again, promising allegiance to his new boss, seeing a further promotion down the line. On his way out he even finds the courage to arrange a date with Miss Kubelik, the cute elevator operator who’s so far managed to deflect all advances from the company’s men. Actually, all but one, as she happens to be none other than Mr. Sheldrake’s mistress.

Billy Wilder always put lots of care in giving his films a solid structure, and with The Apartment he definitely reached a new high. The plot unfolds flawlessly. The characters are perfectly entangled in a web that seems to get more constricting the more they try to set themselves free. With every movement, a new chance for comedy blossoms.

Baxter’s neighbours think he’s a Casanova because of all the noise from his flat. In one scene he’s spotted by one of them while putting out a bin full of empty liqueur bottles. We know he’s cleaning after his guests, but we can also immediately tell what the neighbour is thinking. In another scene Baxter, aware that Mr. Sheldrake is growing tired of his mistress, finally thinks he has his chance with her and rehearses his pitch for his boss. He intends to tell him he will take the girl “off his hands” so he’ll have “nothing to worry about”. As a matter of fact, Sheldrake has just been dumped by his wife, so as soon as he sees Baxter he tells him he’s now ready to take Kubelik off his hands, so Baxter will have nothing to worry about. 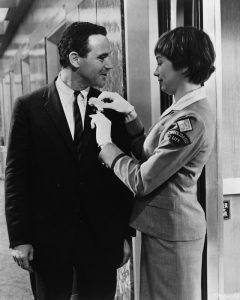 You’ll laugh, but many times it’ll be bitter laughter. Wilder, who also wrote the screenplay (and produced) with frequent collaborator I.A.L. Diamond, doesn’t pull any punches, even entering the sticky territory of attempted suicide. There’s very little to laugh about when someone swallows a bottle of sleeping pills, but it’s thanks to this moment that the film can make such a dramatic impact. Miss Kubelik, although initially far from coming across as a girl who’s easily played, seems to have fallen for the wrong man like too many others in millions of films before her; but her fight to set herself free is real, and as empowering as brilliantly concluded. She achieves this through pure sheer will and hard-reached maturity, and not because of a man saving her from herself, as seen in many mediocre love stories (even modern ones).

If anything, it’s Baxter who grows thanks to her, and to the feelings he’s been developing; for once, he cares about something bigger than his short-sighted personal goals. Baxter is completely oblivious to the tragedy of his character, but he’s well-meaning, naturally charming, and can warm up a room with a smile when given the chance to express his kindness. His arc is one of maturity, too. I always found his act of courage at the end of the film quite abrupt, albeit necessary for the inevitable happy ending. Lemmon’s performance is magnificent, something to be really thankful for: his persona is quirky and funny, because of how he reacts to all his misfortunes, yet deeply nuanced and vulnerable. It didn’t earn him the Academy Award he was nominated for, but surely helped the film scoop five Oscars out of nine, including Best Picture, Director, and Writing.

This new Blu-ray release of The Apartment include a making-of featurette, profiles of Lemmon and Wilder, and other interesting special content that will help you appreciate the film even more. An audio commentary on a couple of scenes will also provide some particularly fascinating insight into this unforgettable work of art. Get your Christmas wrapping paper ready. 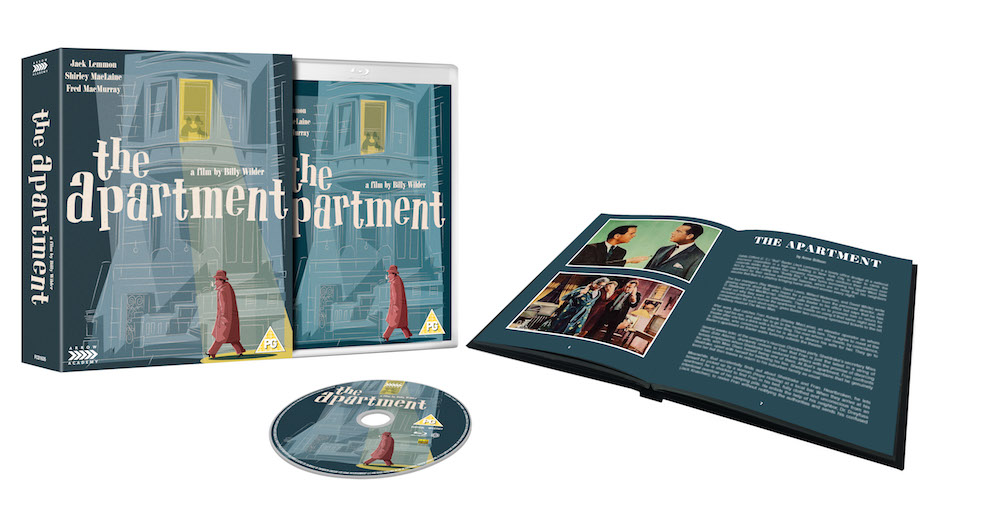