After the traumatic events of “Faith”, this week’s instalment of Outlander not only returns Jamie (Sam Heughan) and Claire (Caitriona Balfe) to Scotland but also offers a distinct change of direction and tone. The focus in “The Fox’s Lair” is the brewing Jacobite rebellion and a final reckoning for Jamie to persuade the clans to choose the side they’ll be on when Charles Stuart arrives on the moor at Culloden to reclaim the English throne.

We make a welcome return to the estate at Lallybroch and the reassuring faces of Jamie’s sister Jenny (Laura Donnelly) and her husband Ian (Steven Cree). Their family has expanded since Jamie and Claire departed for France and the newborn is a reminder of the pain they went through before leaving Paris and, in the quiet, intimate scene of Jamie telling stories to the fretful infant in the middle of the night, there’s a little foreshadowing of the family they will have given Claire’s circumstances when she returns to 1945.

The huge contrast between the rich colours and fine textures of Paris and the down and dirty earthiness of Lallybroch and Castle Beaufort also marks out this significant change in gear. The production team once again rise to the challenge and show that how adept they are at creating atmosphere and substance within the stone halls and corridors of each estate. It’s a reminder too that some time has passed since “Faith”, the healing process is underway and Jamie and Claire have found solace and comfort in one another’s company upon their return to Lallybroch and the Fraser family. 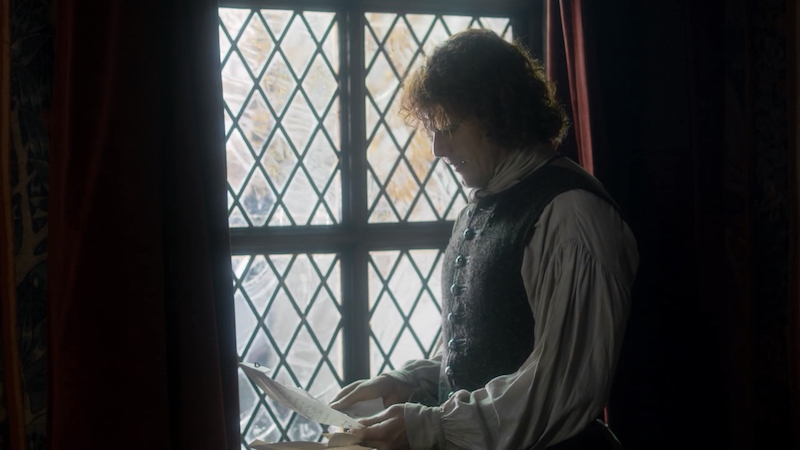 Talking of the Fraser clan immediately brings us to the internecine negotiations between clans Mackenzie and Fraser that occupy most of this episode. Jamie receives a letter from Charles Stuart who has forged Jamie’s signature to confirm that he has agreed to commit his clan to the Jacobite uprising and by default they are now, technically, traitors. Although Claire fears that they are caught in the inevitable turn of history and that “It’s all coming to pass, isn’t it?”, Jamie is resolute, finding inspiration in Claire’s successes in France, and becomes determined to change the odds. The petition from Charles Stuart forces Jamie’s hand to find the manpower that Charles expects him to bring to the war. There is a heartfelt farewell to Jenny and Ian when Jamie takes his only option: to visit his grandfather, the infamous Lord Simon Fraser Lovat, to recruit his men for the forthcoming battle. 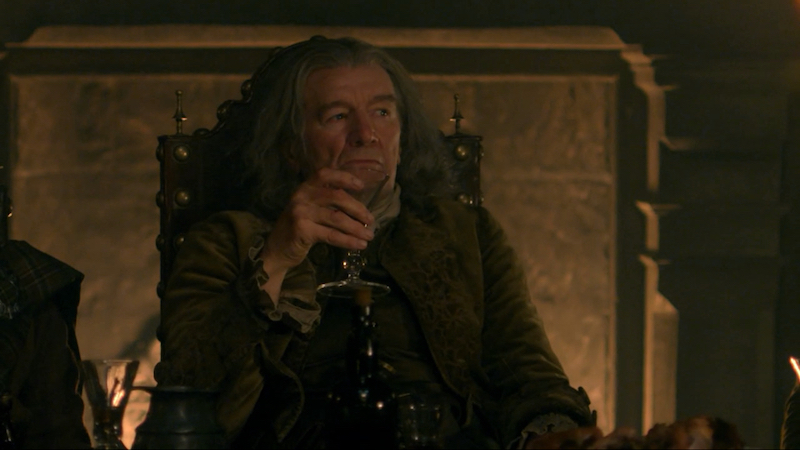 One of the highlights of the episode is the introduction of Lord Lovat, his curmudgeonly wiliness perfectly essayed by Clive Russell. The ‘old fox’ has a reputation as a scoundrel and he’s a symbol of some of the skeletons found rattling in the Fraser family closet. He once tried to kidnap Jamie and Jenny’s mother Ellen MacKenzie. It is also revealed that Jamie’s father was a bastard and, rather endearingly, he worries what Claire will think of this. A mark of their bond is shown in how his family’s past indiscretions are really of no importance to Claire when it is the present, and Lord Lovat’s manipulation of the situation, that matters most. 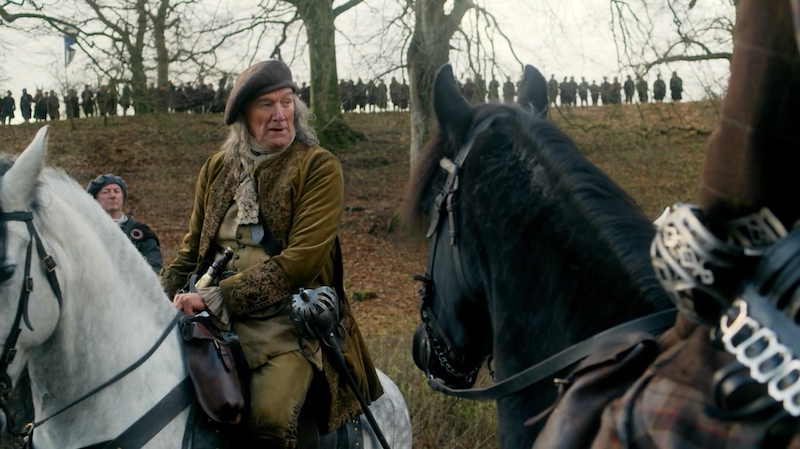 They also find themselves in the company of Colum Mackenzie (the returning Gary Lewis), Jamie’s uncle and clan chieftain, who is at Castle Beaufort to negotiate on his own terms with Lord Lovat. The episode gradually evolves into a complex war of personalities. Lovat will agree to supporting Jamie but only if he signs away the estate of Lallybroch to him. Lovat implies that he can persuade Jamie to hand over the estate by simply threatening to assault Claire. Jamie falls back on what will become their winning hand, Claire’s reputation as the white witch ‘La Dame Blanche’, to protect her from the attentions of Lord Lovat and his men. He uses the fear of supernatural revenge to dissuade his grandfather from any such intentions: “Go ahead, try to ravish my wife. After she’s done with you, I’ll send in the maid to sweep up your remains.”

Mackenzie is there to negotiate a pact of neutrality with Jamie’s grandfather in an attempt to prevent the clans from being dragged into the war. He’s also brought along his duplicitous maid Laoghaire (Nell Hudson), whom we last saw falsely accusing Claire of witchcraft and damning her and Geillis Duncan to an horrific trial. Seemingly repentant, she begs forgiveness from Claire who is clearly in no mood to consider it. She makes it very plain what she thinks of her: “I have fantasized all manner of violent acts that I would subject you to. Ending with lighting the pyre beneath your feet and dancing on your ashes as you promised to dance on mine.” However, when Lord Lovat’s son Simon (James Parris) needs some inspiration to stand up to his father and agree to join Jamie on the road to Culloden, Claire sees a role for her after keenly observing how much Simon is smitten by her. 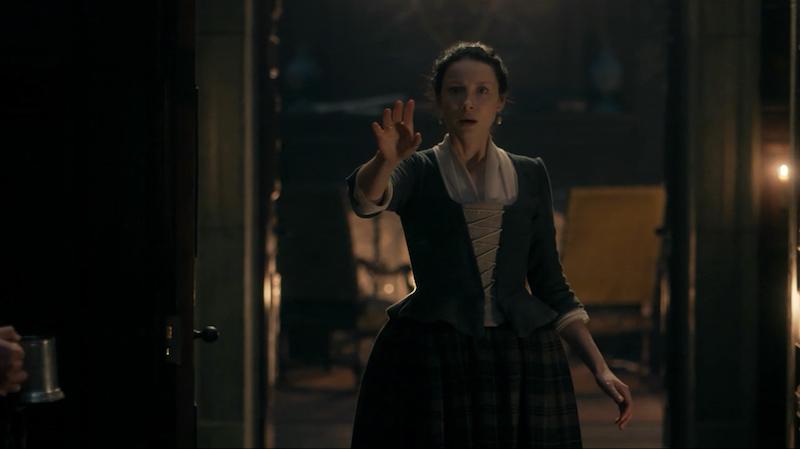 Building on Jamie’s use of her skills as a white witch, Claire is inspired by Lord Lovat’s seer, Maisri (Maureen Beattie) to concoct a theatrical display of doom mongering, faking a vision that she sees the death of Lord Lovat by an axe-wielding assassin. When Lovat tries to attack her, Simon finally finds the balls to intercede and support Jamie. Nonetheless, Lovat signs the neutrality pact with Colum Mackenzie and Claire, Jamie and Simon leave Castle Beaufort believing they have failed to recruit the men they need. To add insult to injury, Claire persuades Jamie to thank Laoghaire as, unbeknownst to him, she did influence Simon’s courageous decision to stand up to his father. It seems Laoghaire’s story is far from over as she is still intent on securing Jamie’s love and I have a feeling that her jealousy of Claire will spur her on to further machinations.

The apt twist to “The Fox’s Lair” is as warped as Lord Lovat’s allegiances. He bequeaths his men to Jamie and Simon on the road out of Castle Beaufort, reasoning that if the Jacobites win, he can claim the credit, and if they fail, his son Simon can hang as a traitor. A devious, cunning old fox, Lovat’s presence is a welcome one as Outlander shifts its concerns towards the inevitable tragedy of Culloden favouring some low-key power politicking that may not be to everyone’s tastes after the focus on Jamie and Claire’s lives in Paris.