The Office‘s Ellie Kemper is utterly fantastic in Netflix’s Unbreakable Kimmy Schmidt, playing the eponymous heroine rescued from a doomsday cult, having spent fifteen years living in an underground bunker with three other ladies, later dubbed ‘The Indiana Mole Women’ by the media. Kimmy’s an incredibly naïve but optimistic woman, with a persistently upbeat attitude and desire to break free of her sudden “victim”-status and make something of her ‘second life’, in the wake of this subterranean rebirth. The entire show’s geared towards the notion of positivity overcoming obstacles, as Kimmy’s cheerful demeanour and beaming exudes a plucky radiance that sweeps people along to mostly positive ends.

Did I mention Kemper is fantastic? This show simply wouldn’t work without such a strong, funny, physical, and focused lead. 30 Rock‘s Tina Fey and Robert Carlock have certainly found one in Kemper—best-known for playing the similarly childlike Erin in the U.S Office, and the hit film Bridesmaids. She’s the heart and soul of Kimmy Schmidt, and a huge part of the fun is watching Kemper’s mannerisms; her manic physicality, megawatt smiles, and silly expressions. She embraces this role with an enthusiasm I haven’t seen from many performers in awhile, and leaves a deep impression.

The show around her is also good, if not quite as fully-formed and irresistible as Kemper’s performances; but things develop as the ensemble grows and its many relationships deepen. Having been freed from her Indiana dugout, the Mole Woman are set to turn their fifteen years of hell into fifteen minutes of fame and fortune (echoing 2010’s Chilean miners’ experience), but Kimmy eschews this to walk her own path. She lands a job as a nanny for wealthy Jacqueline Voorhees (Jane Krakowski), which pays enough to move in with flamboyant gay actor Titus Andromedon (Tituss Burgess).

Those two characters are integral to the show, as they open markedly different doorways for Kimmy’s character to walk through. Jacqueline’s a white, affluent, straight woman who wants for nothing; Titus is a black, poor, gay man struggling to pay his rent. They’re positioned to feed Kimmy into various types of plots, too; from Jacqueline coping with highbrow city society and her unruly family, that includes bitchy teen daughter Xanithippe (Dylan Gelula), to Titus spending his days trying to find fame and love via Spider-Man musical auditions, and employment in a horror-themed bar where he dresses as a werewolf. 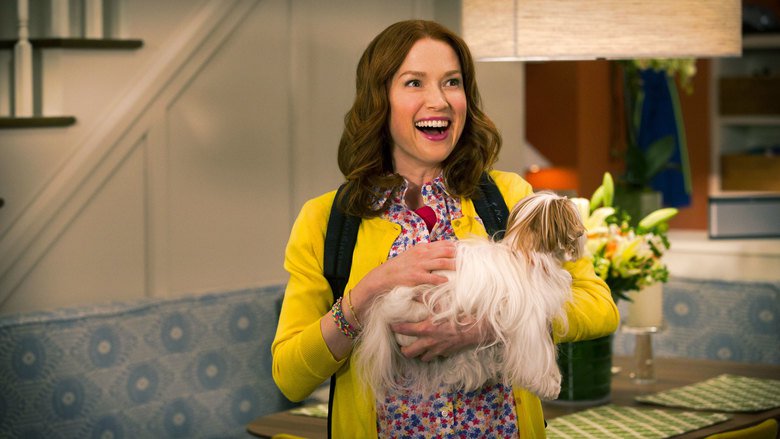 Like all shows, particularly comedies, Kimmy Schmidt improves with every passing episode, snowballing an amusing array of supporting characters and running gags. It started to remind me of Arrested Development about two-thirds through, despite lacking the narrative somersaults that show performed at its height. Some of its characters and archetypes also felt familiar to me. I particularly enjoyed sweet Dong Nguyen (Ki Hong Lee), Kimmy’s Vietnamese study buddy and love interest; Logan Beekman (Adam Campbell), Kimmy’s posh British boyfriend who struggles for common life references; dumb cop Randy (Tim Blake Nelson), Kimmy’s stepfather; and Dr Sydney Grant (Martin Short), a Barry Manilow-alike plastic surgeon who can barely speak because of his many facelifts. And I haven’t even mentioned the famous guest stars who appear in these half-hours, including Tina Fey herself as an incompetent lawyer, Breaking Bad‘s Dean Norris as a masculinity guru, Richard Kind as an uninterested teacher, and Mad Men lead Jon Hamm on hilarious form as Kimmy’s charismatic nemesis Reverend Richard Wayne Gary Wayne.

Unbreakable Kimmy Schmidt flirts with greatness, but there are issues and room for improvement in the already-commissioned second season. While I enjoyed Jane Krakowski’s performance as a high-maintenance socialite who can’t fend for herself, it was noticeable how much the show improved when her character wasn’t part of the storyline for awhile towards the end; and I’d like to see more of a partnership between Kimmy and Titus, who are setup to be a fun double-act, but drift into separate storylines too often, so that Titus’s role in the court room finale was almost incidental. Maybe the creators had no intention for Kemper and Burgess to be a double-act from the start, or in the writing they discovered the characters could do more entertaining things when separated, but hopefully season 2 will tighten Titus’s role up slightly. Oh, and give Carol Kane something more to do than play a grouchy landlady cliche.

Looking ahead, I’m glad Kimmy Schmidt will be returning to Netflix, although this first season had such a defined arc and feeling of character growth that I’m not sure one’s strictly necessary. With Kimmy’s troubled past dealt with, and her relationships having turned significant corners with Jacqueline and her fellow Mole Women, there’s a chance the show will lose its distinctiveness now its Blast from the Past-esque back-story’s been explored. It might just becomes a scattershot sitcom about a buoyant woman making pop-culture gaffes because there’s a fifteen-year gap in her knowledge (the show gets surprising mileage from Kimmy’s pop-cultural blindspots, but there’s only so many things she can be comically unaware of before it gets repetitive).

Optimistically, while this season was originally created for NBC (who decided it wasn’t a good fit for them, so passed it to Netflix for a percentage), Tiny Fey and Robert Carlock can craft future episodes with non-network television in mind… which will hopefully result in more experimentation, and plotting that takes advantage of the binge-watch mentality streaming services inspire.

THE LEFTOVERS, 3.7 — ‘The Most Powerful Man in the World (and His Identical Twin Brother)’