At its heart Arrow Films’ latest release, The Zero Boys, is just another straight-to-video slasher movie; of the type that dominated the 1980s home VHS revolution. However, dismissing it out of hand does it a disservice. It’s an interesting genre hybrid, morphing between action, teen romp, horror, and survival movie. The nature of the film can at times be unintentionally comedic (with some bad dialogue and less-than-realistic acting) but it’s worth a watch if you’re curious. It has some interesting scenes and is largely held together by a synth-laden soundtrack from Hans Zimmer (two years before he broke through with 1988’s Rain Man).

The Zero Boys represents the first Hollywood film shot in the US by Nico Mastorakis, a Greek director previously responsible for cult ‘video nasty’ Island of Death, which was banned in the UK at the time. However, there is much less gore and a far lower death count. Mastorakis makes a conscious effort to cut away before violent scenes happen, and leaves much to the audience’s imagination. 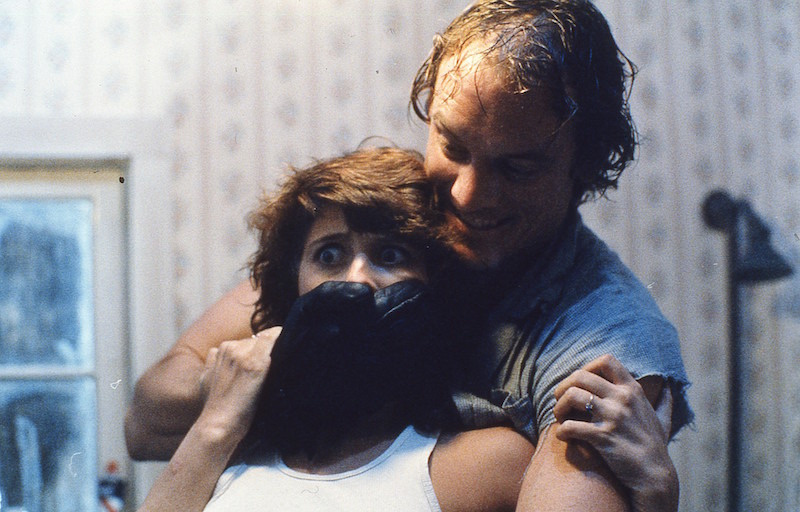 It’s quite easy to see what influenced him on the film. The plot is like a ‘greatest hits’ of popular genres from the 1970s and ’80s—with shades or Rambo, Friday the 13th, and Deliverance, to name but a few. In context, its attempt to mimic films with wide audience appeal is understandable; 1986 was a time where low budget films battled for shelf space at the local video store against both the proliferation of cheap rivals and big-budget Hollywood releases. With such strong influences, it would be easy for the film to slip into pastiche or ‘rip off’ territory, but it’s openly self-referential, with nods to Jason from Friday the 13th and Sylvester Stallone in Rambo. Importantly, the way it utilises the paradigms of one genre, only to switch to another entirely is what keeps everything interesting.

The story follows a group of friends (played by relative unknowns Daniel Hirsch, Tom Shell and Jared Moses) who are part of ‘The Zero Boys’, a paintball/survival game team, so-called because of their usual tournament score of nil. The opening action scene depicts a war-like gun fight of camouflaged figures exchanging bullets with casualties. Finally, through the smoke of battle, a Nazi-uniformed figure emerges before being shot by our hero Steve (Hirsch). However, the illusion is abruptly broken when we see a group of ‘modern’ girls sat on cars cheering, revealing it’s all been a paintball game. It’s an example of the cheesy classic ‘fake out’ opening, so prevalent in the ’80s, and also an early indication of how this film play with preconceptions. 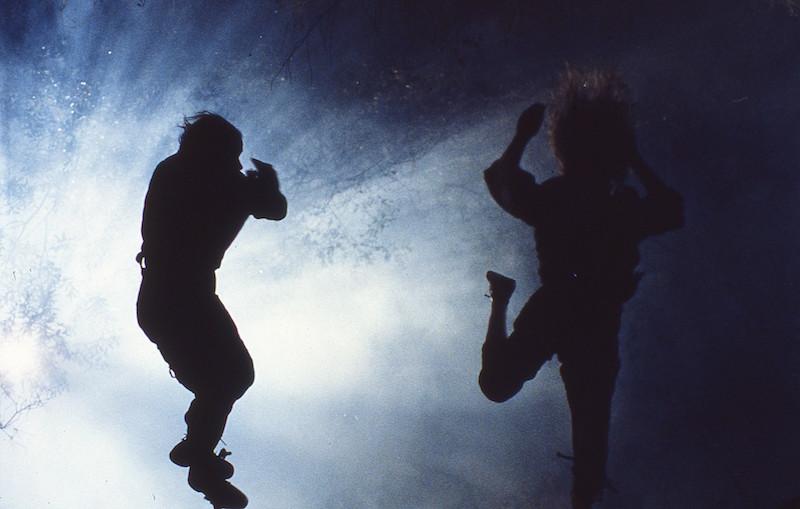 With the Zero Boys victorious they can take the spoils—it’s been a bet for pride, money and, in some blatant ’80s misogyny, a girl played by Kelli Maroney (Night of the Comet, Chopping Mall). They head off to celebrate in a log cabin out in the woods and the plot begins to follow the usual horror beats, as they’re hunted by two shadowy maniacs—one of whom is played by Martin Sheen’s Brother, Joseph Estevez. So now the Zero Boys must now use their skills and their guns to survive for real.

It’s from this point that the film delivers some striking moments—including a great scene where, after one of the group is taken, they go to find her and discover a torture chamber equipped with a video camera and TV displaying all the murderous deeds of the killers. The Zero Boys see an attempt on their friend’s life on-screen in the room, which is interrupted with a ‘to be continued’ title card. It’s a disturbing moment that wouldn’t be out of place in a modern Saw movie, and felt ahead of its time. There is also some impressive use of the camera to build tension, such as a nice slow 360-degree pans to reveal some action. 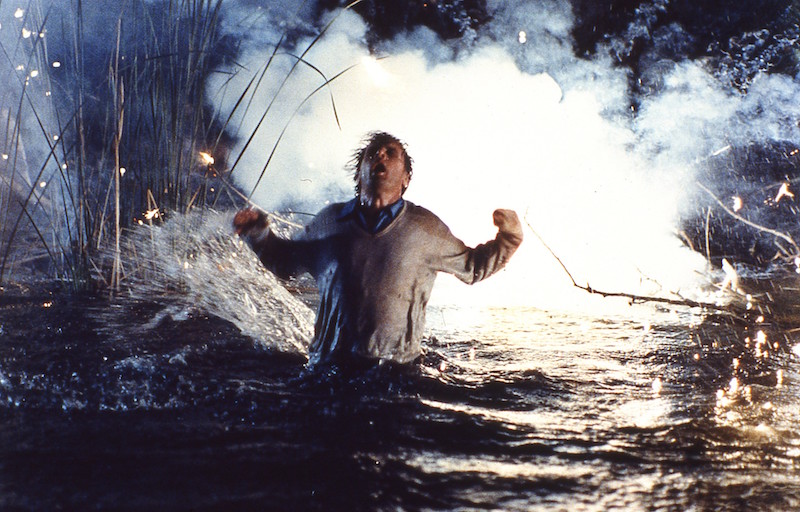 However, these moments are often let down by a weak script and the calibre of acting—the most egregious example being when the Zero Boys find a severed head in the fridge and how they brush off the discovery. The script’s justification for why they’ve brought real guns and live ammunition which is also laughable.

As the film continues the narrative begins to transform again, this time into a survival film, as our heroes are chased into the woods by the crossbow-wielding killers and the remaining group must avoid various traps until the somewhat inevitable climax involving a brilliant use of a Taser (an uncommon weapon at the time).

Zimmer’s early soundtrack is effective, if quintessentially ’80s, and you can already hear the German composer’s prowess. From the blaring synth beats at the beginning, to the more subtle horror strings that increase tension when things go awry, the music is one of the film’s saving graces. 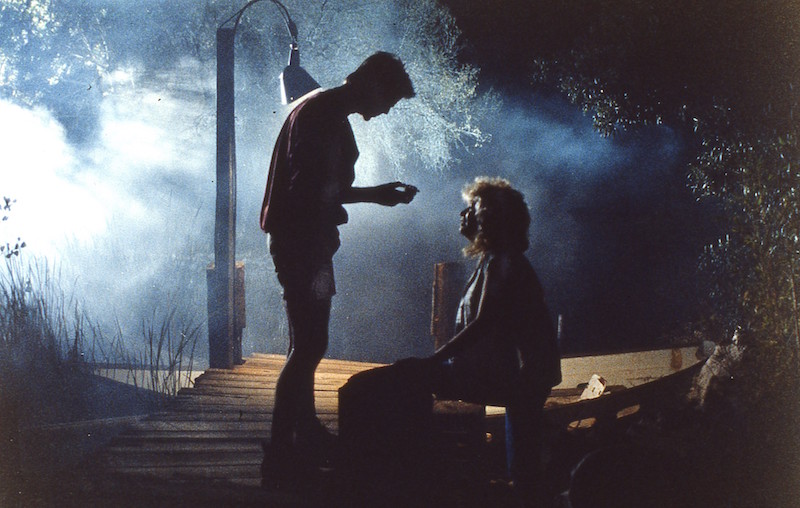 Released by Arrow Films, the picture quality of The Zero Boys is, for the most part, excellent. The 4k restoration delivers clear images (with the exception of a few nighttime scenes where the film grain is distracting) but given The Zero Boys is now 30 years old and made on a shoestring it’s easy to accept.

As with any Arrow release, the discs comes chock-full of additional content. The most interesting of which is a rather bizarre extra where director Nico Mastorakis interviews himself. Nevertheless, there’s some great trivia and behind-the-scenes details, including the fact writer-director Frank Darabont (The Shawshank Redemption, The Green Mile) worked in the production’s art department.

There is also a decent audio commentary with star Kelli Maroney (moderated by Shock Till You Drop’s Chris Alexander), which it’s revealed was recorded in a motel room with the two watching the film on a laptop. Likewise, there are some fun anecdotes to hear.

The Zero Boys is not really a hidden gem you’d be a fool to overlook. It’s just a serviceable watch, best seen with a healthy sense of irony and an ability to overlook silly scripting and cheesy moments. However, it’s fun and worth picking up if you’re a fan of ’80s B-Movies and appreciate a good soundtrack.