History tells us that it was an English spy, Dudley Bradstreet, who forced the hand of Charles Stuart in his decisive war council with John O’Sullivan and the Lords George Murray, Elcho and Ogilvy on 4th December 1745. Bradstreet provided false intelligence that an army of 9,000 would prevent Stuart’s march to London along with the three other armies that it was feared could exhaust Jacobite manpower. All were vying for a retreat to Scotland by the time this intelligence was received and, after much contemplation, Stuart agreed.

This council’s deliberations, minus the appearance of Bradstreet, opens “Vengeance is Mine”, and in this fictional universe it’s Jamie Fraser (Sam Heughan) who sides with Charles Stuart (Andrew Gower) to continue the march to London, despite an evident lack of support from the generals. Yet, he is also fully aware that persuading the Young Pretender and his army to keep marching south would alter the path of history and possibly prevent the defeat at Culloden. It’s rather ironic that writer Diana Gabaldon should contrast these tangled, frustrating arguments with scenes of Claire (Caitriona Balfe) performing some rudimentary dentistry. It’s all about pulling teeth. 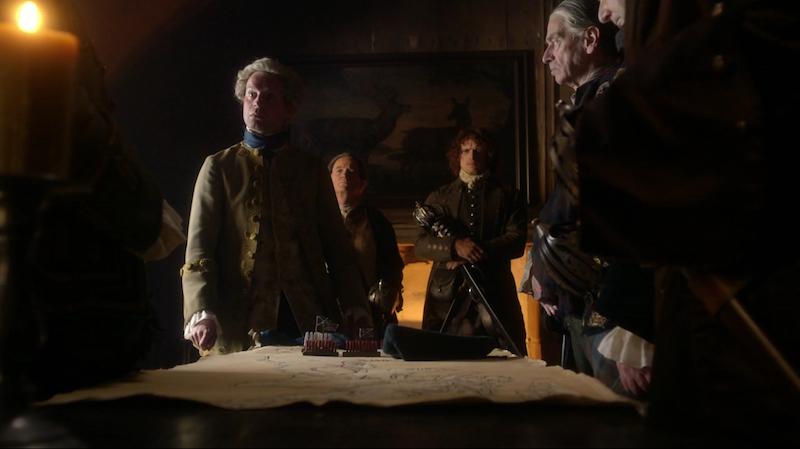 “Vengeance is Mine” paints Stuart as a rather more passionate leader than we understand from the history of the period, and it’s hard to reconcile this with the man who’d eventually flee to Skye disguised as an Irish maid (the choice of adapting ‘The Skye Boat Song’ lament over Outlander’s titles is very apt). For their troubles, Jamie and Dougal (Graham McTavish) are sent home with their men to Scotland. Stuart’s generals fear the Fraser clan has too much influence on the Prince’s plans. However, they’re ordered to Inverness rather than the welcoming bosom of Lallybroch, and it’s this turn of events that drives the rest of the story and concludes a major subplot left unresolved since Jamie and Claire’s sojourn to Paris.

Gabaldon’s turn in the scriptwriting chair this week sees her make subtle changes to the original narrative of her book Dragonfly in Amber. But we’ll get to that momentarily. Before the episode raises the stakes and hurtles towards its bloody conclusion, there was time for a moment of reflection about how Claire will be reluctantly and dramatically separated from Jamie and return to the modern world. This is reinforced by the tender Gaelic promises that Jamie makes at Claire’s bedside about how he will “shield my beloved, my white dove. And the child that she may one day bear. Preserve her from violence and from harm. In this place. And every place.” If their bond is this strong it will take an earth-shattering force to break it and I suspect that will occur prior to or during the defeat at Culloden. 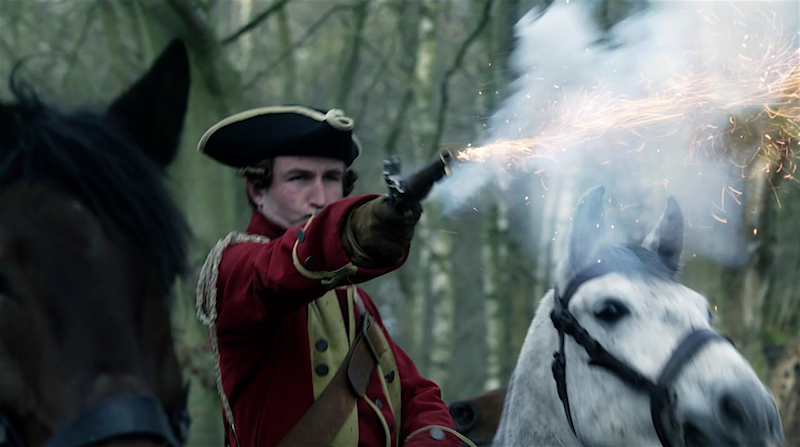 On the road back to Inverness, where again the splendid location filming comes into its own, the group are attacked by Redcoats—culminating in a rollicking, action-packed chase on horseback—and are forced to take shelter in an abandoned church. Poor old Rupert (Grant O’Rourke), already suffering the loss of his comrade-in-arms Angus last week, is shot in the eye. Claire manages to remove the bullet but she’s hardly had time for some incongruous wisecracks about Robert Louis Stevenson’s penchant for eyepatches, peg legs and parrots before the Redcoats have them surrounded. The only solution to this standoff, much to Jamie’s chagrin, is for her to dust down her Claire Beauchamp alter ego and negotiate freedom for the clansmen by posing as a kidnapped Englishwoman.

The war is set aside as the episode concentrates on Jamie’s rescue of Claire from Belmont House where she’s been secreted away by the English garrison under the charge of Lieutenant Barnes (Robert Curtis). It’s here that we again encounter the duplicitous Duke of Sandringham (Simon Callow, wringing every last mellifluous drop from the slimy character) and, while we as viewers know the old rake is up to no good, Claire’s senses seem to have deserted her and she actually starts to fall for the story that his traitorous ways have been punished with a spell in the Tower of London. He persuades her to take him with her if Jamie does mount a rescue operation not just to prove his true allegiance to the Jacobites but to save his own neck. “You must know. You’ve always known that in my heart, I am a Jacobite,” he assures her. Claire is not persuaded and offers: “I’m reasonably sure that you don’t have a heart.” 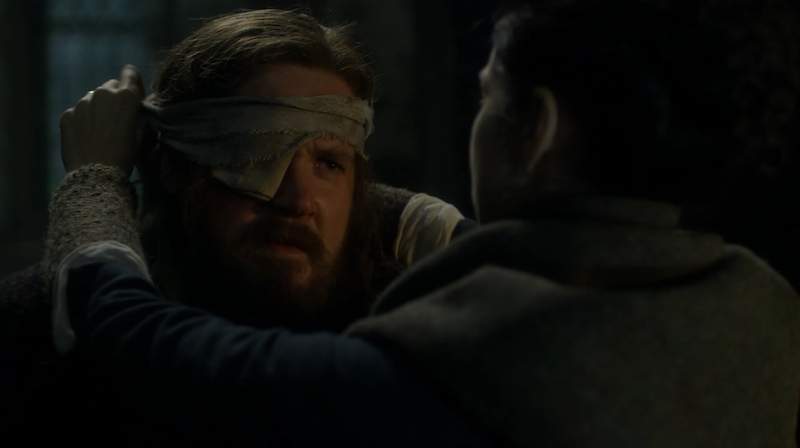 This is, of course, all a diversion and, plot-wise, Sandringham’s appearance is a hugely convenient coincidence. When Claire is unexpectedly reunited with Mary Hawkins (Rosie Day), now revealed as the Duke’s goddaughter, she sees through his plans to marry the poor girl off, as “soiled goods” to a British loyalist. By doing so, he can play both sides at once. But the scales fall from Claire’s eyes when she spots a familiar birthmark on the hand of Sandringham’s valet, Danton (Andrea Dolente). It’s the mark she recalls seeing during the attack in Paris that resulted in Mary’s rape and where, in its aftermath, Murtagh promised to hunt down the perpetrators. You can see where this is going.

It turns out Sandringham was in debt to the Comte St. Germain and, in order to repay the debt and satisfy Germain’s desire for revenge against Claire, he arranged the attack and rape. Although the target was Claire and the aim was to kill her, poor Mary was the unintended victim of the sordid bargain. As Sandringham sets up a trap to lure Jamie, an indication of Claire’s whereabouts has been passed on via that other convenient character appearance, mute beggar Hugh Munro (Simon Meacock) who was previously seen in last season’s “Both Sides Now”. Claire’s badly worded letter in Gaelic (“She’s even misspelt ‘Help!'”) brings Jamie and Murtagh (Duncan Lacroix) to Belmont but fortunately Mary, ignoring the Duke’s repeated demands she goes to bed, has the gumption to warn them, via Hugh, that it is a trap. 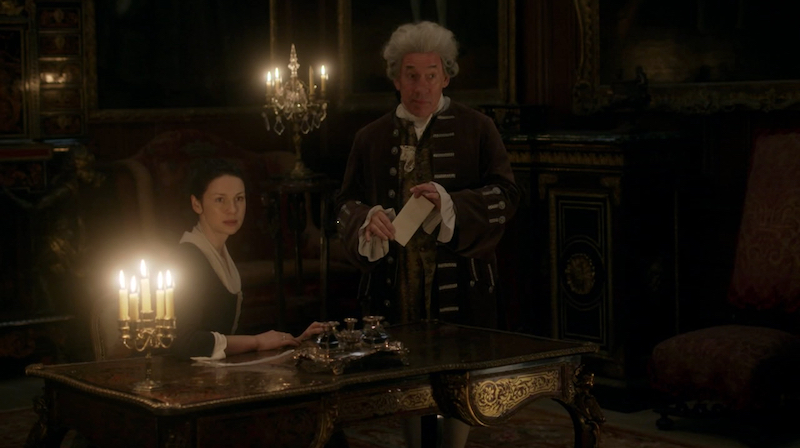 The denouement to these machinations is tense and rather horrible after Jamie and Murtagh burst into the kitchen where Danton and Sandringham hold Claire and Mary hostage. Sandringham hurriedly puts his wig on when Jamie turns up, thinking decorum is in his favour in the presence of the clansmen. It’s a witty nod to his fate and the visual motif of the powdered wig falling to the floor in the opening titles. Returning to the changes made from Gabaldon’s book, wherein it is Jamie who finishes off Danton, it is perhaps rather more appropriate he is skewered with a knife by Mary, a young woman finally able to claim her vengeance on the man who took her dignity. Murtagh also fulfils his promise to Claire and Mary by hacking off Sandringham’s head with an axe, placing it at their feet and concluding with: “I kept my word, I lay your vengeance at your feet.”

It’s a violent end to the rather fruity but repulsive character of Sandringham, and it’s a shame we won’t be seeing any more of the excellent Simon Callow. However, his demise wraps up many elements of Claire and Jamie’s ordeals in Paris, though it perhaps depends too heavily on contrivance and coincidence to properly satisfy, and brings Mary back into the series. Next week’s episode will, again, weave together some of the incomplete threads together as I suspect we’ll see the outcome of Mary’s brief relationship with Alex Randall in the aptly entitled “The Hail Mary”.

AFTER LIFE – Series One