‘Everyone has a hidden agenda’ is our theme in “AKA Pork Chop”, undoubtedly one of the weakest and most frustrating episodes of the season. It’s the hour in which every character seems to be noticeably gearing up for their final showdown, leaving us hanging at the end — again. As with “AKA Facetime” and “AKA Ain’t We Got Fun”, “AKA Pork Chop” is yet another scene-building instalment, and the one that makes the inconsistency of Jessica Jones season 2 much clearer.

In “AKA Pork Chop”, we see Jessica (Krysten Ritter) guiltily prioritising Alisa’s (Janet McTeer) safety above all else, even as she finds a way to smuggle Karl (Callum Keith Rennie) out of the country. The reason Jessica suddenly does an about-turn on the scientist? If she gets Karl away, Alisa will agree to confess to all her crimes and tell the police where Karl is — or now was — supposed to be, taking a plea deal set up by Jeri (Carrie-Anne Moss) that would allow her to stay locked up in New York, away from The Raft, with visitation rights from her daughter.

Jessica thus spends the whole hour letting her guilt over letting her mother get arrested, wash over everything else. That’s not unusual for Jessica, but in an episode where everyone else is rapidly revealing their intentions, it’s a tough line to follow again. The only stable one here? Oscar (J. R. Ramirez), who’s helping her make a fake I.D and deal with her crumbling emotions. 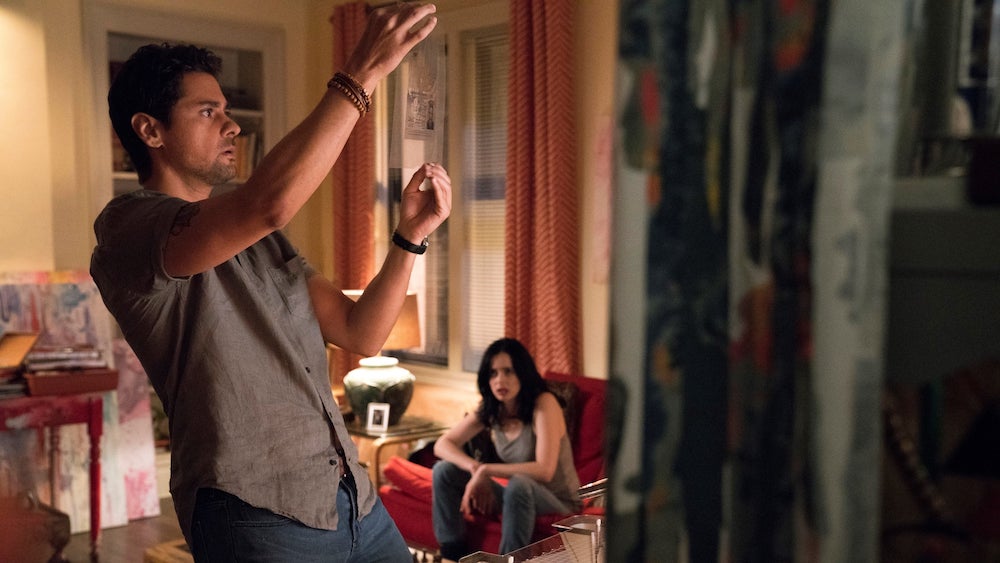 Let’s start with the biggest culprit who’s creating this mess: Trish (Rachael Taylor), who, once she finds out about Alisa, tells Jessica she won’t run the biggest story of her career for Jessica’s sake, but then promptly goes after Alisa trying to find out where Karl is. In doing so, the now-sober Trish goes off the deep end, knocking Malcolm (Eka Darville) out in order to go after Karl herself with a gun.

Speaking of Malcolm, he’s back from his inhaler-induced run and seemingly the only logical person in the room. He tells Jessica and Trish to take a hike for all their lies and manipulation, and then clearly tells the latter he still likes her but will not pursue it because “there’s a hole in your soul, and a hole in my mine too. Let’s not use each other to fill it.” Of course, the next time Trish knocks on Malcolm’s door? They have sex. And Malcolm helps Trish find Karl, only to get stuffed into a trunk. 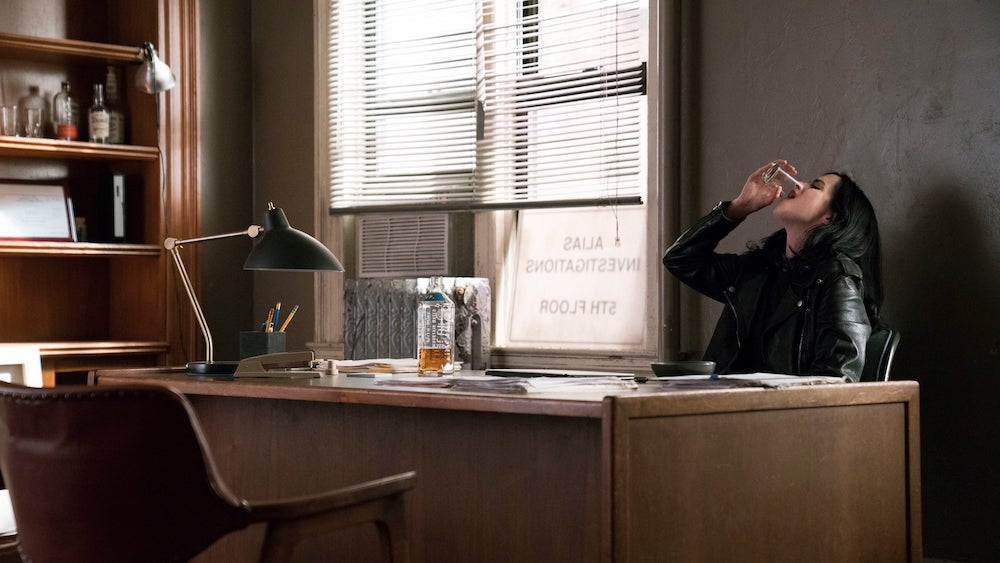 By trying to take on an entity (IGH) instead of a person (Kilgrave), Jessica Jones has fallen victim to the curse of sophomore seasons: too many plot points, unwieldy ambitions, and not enough time to wrap everything up properly. This is saying something, considering how many times we chased Kilgrave (David Tennant) around last season.

It makes other subplots, which could be important, feel disposable — like the reveal of Jeri’s healer to be a fake, working with Inez (Leah Gibson) to rob Jeri blind. Carrie-Anne Moss is heartbreakingly sad in this episode, but in all the fuss her character gets left behind. I guess that’s her arc for the year, closed in the middle of chaos. 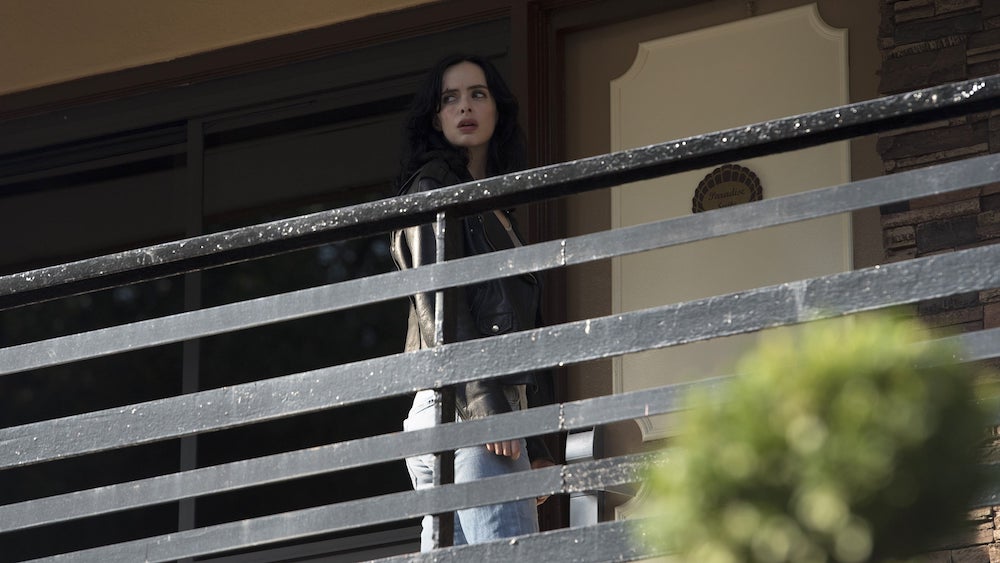 Maybe the aim of Jessica Jones season 2 is to put the viewers right in the thick of the action, so we’re as confused as the characters. This is episode 10, and I still know nothing about “IGH the entity”, except Karl seems to be the face and brains behind it.

Even though we have one villain to contend with, as in season 1, the difference between the villain being an entity, compared to a person (Kilgrave), makes it tough for the viewers to focus. The latter was a clear focal point, helping us bring our collective sleuthing skills together to trap him. The former, here, could be anything, and that shows, as we follow Jessica down one path to her mother, while the rest of her team goes down other paths that lead towards (or away?) to IGH.

All of that, and the addition of personal problems everywhere you look? It makes Jessica Jones sloppy, and that’s not a term we usually associate with this Netflix series. Maybe it’s about family and how they distract us from our goals, as we end the episode with Jessica trying to protect Alisa from a guard that’s torturing her (with electric cuffs). Jessica breaks into the guard’s home and kills him accidentally, bringing us full circle back to Jessica being a murderer. 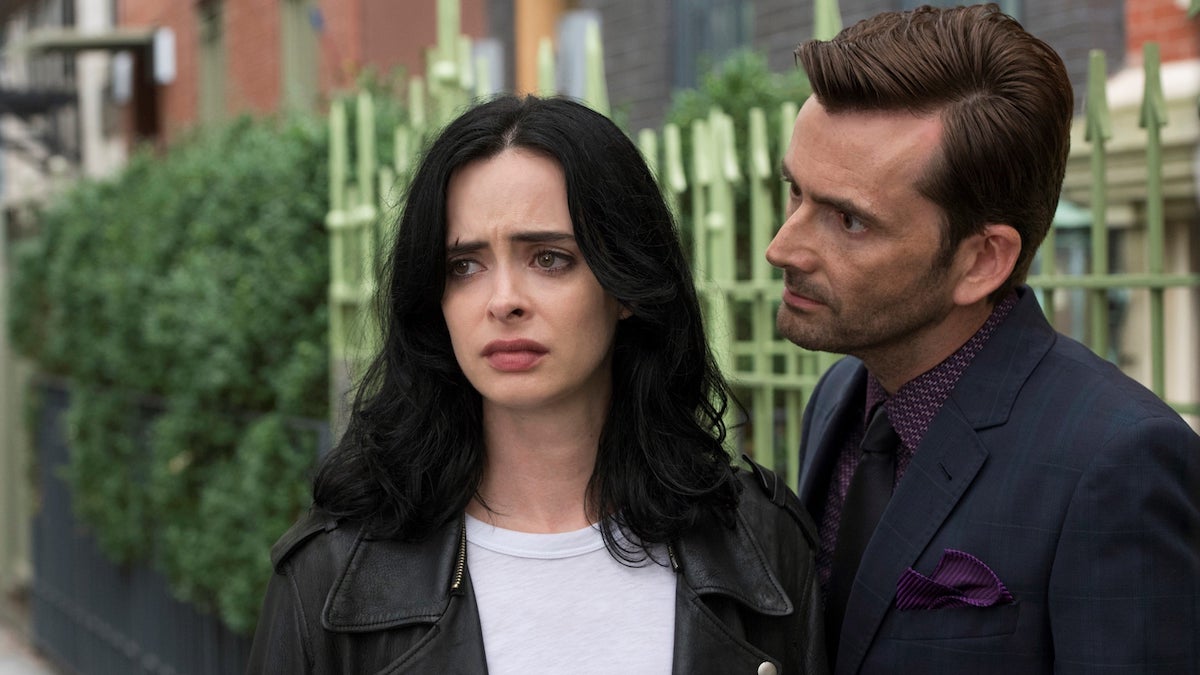 “AKA Three Lives and Counting”

It’s emblematic when, 11 episodes into a 13-episode season, the return of a strong villain finally helps pull Jessica Jones back into focus. Maybe Rosenberg and team didn’t want to waste Kilgrave’s significance to Jessica, hence allowing his haunting of our heroine to begin only after she kills the guard. She hasn’t killed since Kilgrave and Reva (Parisa Fitz-Henley) after all, so this accidental kill unsurprisingly puts Jessica in a tailspin as her ‘I am not a killer’ counter gets reset.

“AKA Three Lives and Counting” follows Jessica (along with Kilgrave) as she tries to clean up the evidence and stage a suicide, even as Kilgrave tells her that “I’m proud of you” and “you’re a pro now. Three lives and counting!”

David Tennant chews up each scene he’s in, and Jessica gets understandably distressed trying to resist Kilgrave’s suggestion to kill everyone that angers her. For viewers, though, Kilgrave’s clear ambitions and ability to pull focus mean that we’re all aware that the episode won’t veer off course, and it doesn’t, not even daring to show us a scene that’s unrelated (sorry, Jeri) in “AKA Three Lives and Counting”. This makes it the tightest episode of the season, on par with “AKA I Want Your Cray Cray”, which was a flashback. 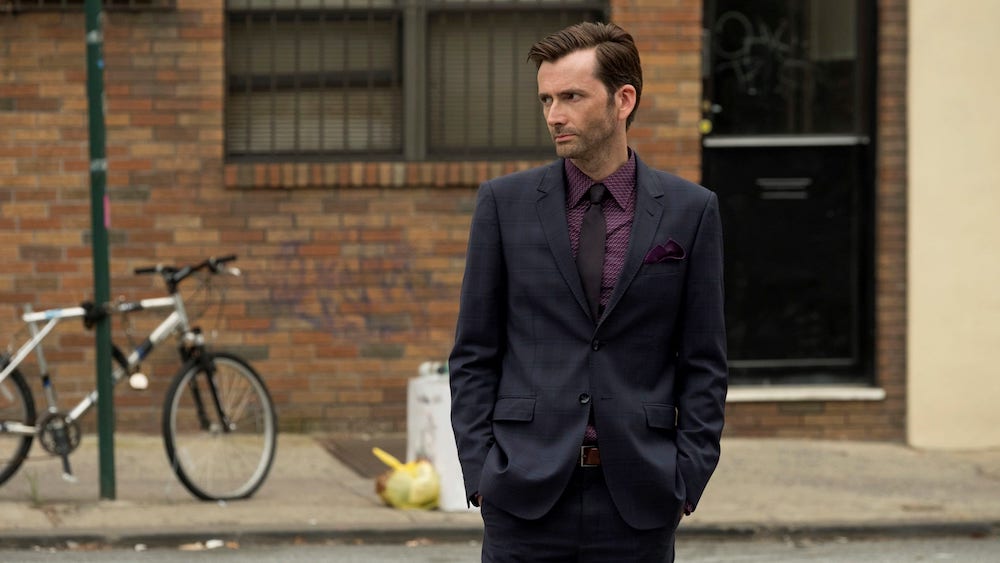 “AKA Three Lives and Counting” goes back to the theme of control, and Jessica spends the episode cleaning up everyone else’s mess. We find out that Trish’s arc this season (which I’m assuming has ended, since there are only two episodes left) is one of ‘superhero envy’, and that she was seeking out Karl so he could turn her into a powered person as well. Karl agrees, at first because she has him at gunpoint, but later, because he’s a scientist who just wants to ‘save the world’.

So our IGH journey abruptly stops with Trish, whose body doesn’t react properly to the procedure, leading to a scene where Jessica smashes in and almost kills Karl, before controlling herself, grabbing Trish, and running out. Karl has a sudden change of heart as to the benefits of his procedures after almost killing Trish, and decides to end it all, blowing up the clinic with all his work and research while committing suicide. Good riddance. I hope we don’t have to see another powered person come out of the ashes of IGH. 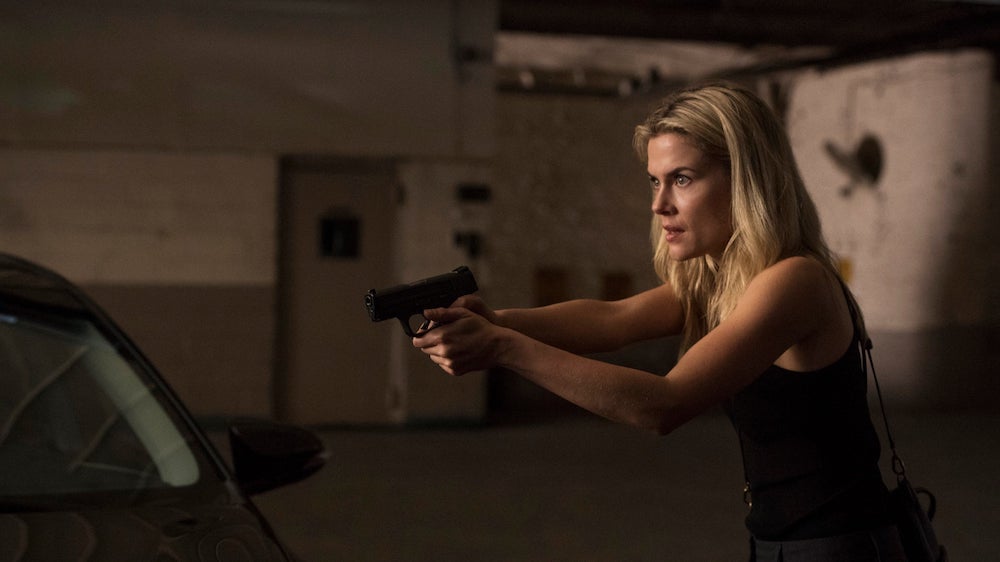 While Trish is in the hospital, Jessica and Malcolm are arguing (again), with Jessica expressing her disappointment at his betrayal and Malcolm expressing his anger at her treatment of him. We then see the two part ways, seemingly for good this time. I doubt that’ll last, but hopefully it’ll give us more storylines between the two that don’t always revolve around Alias.

Kilgrave seems to have been a one-episode wonder, as Jessica smugly kicks him to the curb by reminding him that she didn’t kill Karl.

I’m not a killer. I’m not you. I’m not my mother. I can control myself. Which means I’m more powerful than you ever were.

Speaking of her mother, though, Alisa, who’s been happily dealing with a nicer guard, has just found out about Karl’s death in relation to Trish. Cue she-hulk rampage again…