In the thrilling penultimate episode of this sixth season, two mighty battles appear to indicate a sea-change in world affairs, with women perhaps gaining the upper-hand across Westeros and Essos?

Viewers were poised for a huge battle in the north, but an amuse-bouche was provided across the Narrow Sea. Daenerys (Emilia Clarke) decided to punish the Masters for breaking the pact Tyrion (Peter Dinklage) had created to ease the country’s slavery into the past. In short, this meant sending all three of her dragons out across the bay, with Dany sat astride Drogon, and ordering them to incinerate the Masters’ fleet of invading ships. It was a very impressive visual effects sequence, even for a show that’s become the gold-standard for putting cinematic spectacle with a TV budget. A little overshadowed was the Dothraki, led by Daario (Michiel Huisman), arriving on horseback to slaughter the Sons of the Harpy, but we’d certainly have our land battle itch scratched by this hour’s conclusion.

Later, it was a surprise to see Theon (Alfie Allen) and Yara (Gemma Whelan) in Meereen without much fanfare, offering a hundred stolen ships in exchange for Dany’s support putting Yara on her father’s Salt Throne. I’ve always felt that Game of Thrones is a feminist story in many ways (a subjugated gender, rising in strength across many subplots), and this development perhaps sets us on a course for three strong women coming to rule Westeros in peace and harmony: Daenerys with ultimate rule of the Seven Kingdoms, but with a faithful offshore ally in Yara Greyjoy, and perhaps Sansa (Sophie Turner) keeping peace in the north? Whatever happens, I loved this scene—especially Yara’s mild flirting, the parallels between Yara and Dany (as very capable women with abusive fathers), and how the Greyjoy siblings stated their case in a very reasonable way. If Dany’s dragon attack has managed to end slavery across Essos, thanks to Yara she’s already on her way to bringing an end to the reaving, raping and pillaging across the Iron Islands. 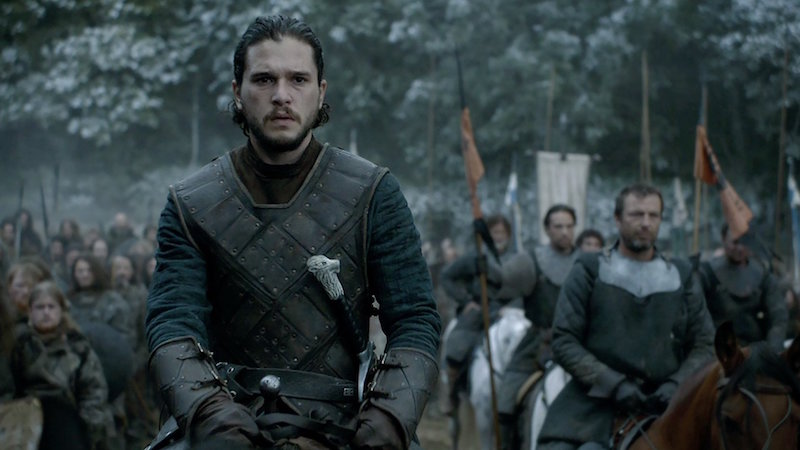 So here it was.

It’s been a long time coming, but this was more than worth the wait. Game of Thrones’ first season found a way t avoid showing a large-scale battle (with Tyrion being knocked unconscious at the onset of one), but since then it’s found ways to keep topping itself every season. Last year’s “Hardhome” (also directed by Miguel Sapochnik) was always going to be tough to beat, but “Battle of the Bastards” surpassed it. It was less fantastical and horrifying than the “Hardhome” sequence, without the inherent dread the White Walkers bring with them, but I appreciated the different tone. This was a brutal, emotional, relentless spectacle that had real weight and physicality to it—despite the extensive use of digital people and horses. In fact, it’s easy to rank this clash above most Hollywood movies of late, it was that well crafted. I’ll take this over the multi-million dollar Battle of the Five Armies from the last Hobbit, for instance. It helps that you care so deeply about who wins, who loses, who dies, and who survives—which isn’t always true of movies that only have two or three hours to get you invested.

Going up against the sadistic Ramsey Bolton (Iwan Rheon) was always going to lead to pain and bloodshed, but also mind games. I liked how Ramsey relished referring to Jon Snow (Kit Harrington) as “the bastard”, now he’s secured his father’s name and title, and for how the conflict’s first blood was drawn after a sequence of grisly sport—with Ramsey making his prisoner Rickon (Art Parkinson) run across the battlefield to his brother Jon, shooting arrows at the rightful heir of Winterfell every step of the way. And yes, I truly thought the grin was about to be wiped off Ramsey’s face as so many of his arrows were failing to hit their marks, but, of course, he was just toying with us. Rickon was eventually struck down, inches from Jon’s outstretched hand, and from that moment the battle was tipped in Ramsey’s favour.

(But did it really have to be? Jon’s a noble fella, but it was a ridiculous mistake to go riding after Rickon. This was obviously a way to separate him from his men. And why didn’t Rickon just lie down on the grass, once he was a safe distance away from Ramsey? Surely it would’ve been harder to hit a stationary target at ground-level, than an upright one running in a straight line. Oh well.) 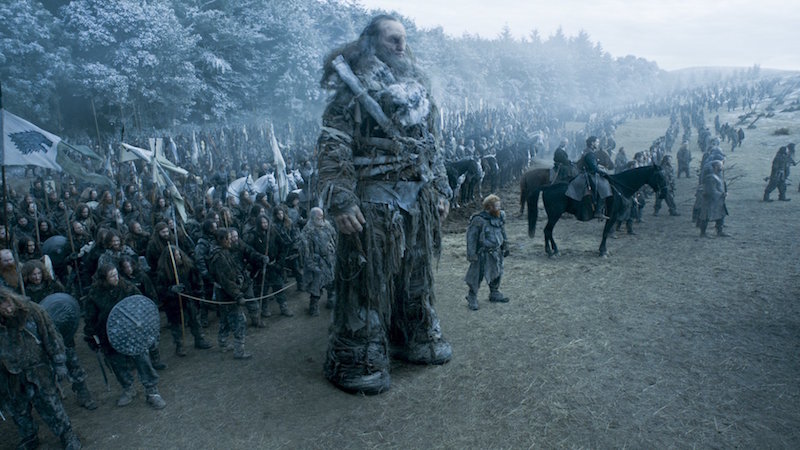 Despite a few annoying moments that didn’t make sense (why did Sansa keep quiet about asking the Knights of the Vale to help them from her own brother?), this episode was a triumph. It was intense, exhilarating, and managed to convince you events were going one way, before flipping them the other. There were at least three times where I thought Tormund (Kristofer Hivju) was a goner, and yet he managed to survive the day. (All the Tormund and Brienne ‘shippers can sleep easy.) Jon felt relatively safe, mainly because the show’s already played the ‘death of Jon Snow’ card very recently, and yet that moment when he was being suffocated beneath stacks of bodies and men made me reconsider his chances for a fleeting moment. I also appreciated the show making it clear that Melisandre (Carice van Houten) can’t resurrect anyone, just those the Lord of Light deigns worthy of a return to life. In which case, what does Dondarrion’s future hold? And will Melissandre survive the season, now that Davos (Liam Cunningham) has figured out she had his beloved princess burned at the stake?

In the end, the only notable death during this episode, from Team Stark, was Wun Wun the big friendly giant. He became Ramsey’s greatest hunting trophy with an arrow through the eye socket, seconds after using his strength to break down Winterfell’s huge door.

Of course, in many ways the outcome of this battle was obvious, and if the ultimate outcome was predictable. Ramsey’s days have felt numbered since early in the season. His final moments were very satisfying, thankfully—beaten to a pulp by Jon on the courtyard floor, before being tied to a chair in the kennels to share a moment with his abused wife Sansa… before his own monstrous hounds, starved by him for seven days, turned on their master and tore him to shreds. It was a chilling demise, mostly occurring off-screen (although that brief shot of one hound clamping its jaw around Ramsey’s head made me wince), and everything this despicable character has deserved since day one.

Game of Thrones will miss Iwan Rheon. His character had become a little one-dimensional, true, but he was still one of the vilest villains ever created. There was an impish glee to his perversions which was oddly enticing, and I got a kick out of seeing what twisted schemes he’d come up with next. The show still has the Night’s King as a supervillain to defeat, but Game of Thrones’ overall story is running conspicuously low on worthy foes. The High Sparrow is a sanctimonious pain in the arse, but I can’t say I’m hugely invested in seeing him removed from power or killed. And that leaves… who? Walder Frey, I guess. I’d like to see the Stark’s get some vengeance for the Red Wedding massacre, but that’s pretty much it.

Maybe this is a sign that, from next season, all eyes are going to turn to beyond the Wall, so the people of Westeros and beyond can unite against an undead enemy about to cross into the land of the living..?