The scariest thing about 2016’s distaff Ghostbusters is the bellyaching thrown its way by immature fans who… well, weren’t getting the sequel they’d imagined. Sexist remarks have blighted this remake’s marketing campaign, ensuring any informed opinion can now be twisted to fit the haters’ narrative. If you love the all-female Ghostbusters, you’re just being politically correct. If you hate it, welcome to Club Misogynist. For the fair and balanced fans, of which I’m one of many, the truth about this movie’s more complicated. Funny thing.

Ghostbusters isn’t a sequel, but a remake indebted to franchise iconography. It’s a film that knows the burden it’s under, the weight of geek expectation, so can’t avoid surfing waves of nostalgia. In some ways I wish Ivan Reitman’s original had been a truly great movie, making it untouchable, like Back to the Future. Feig can’t perform the trick J.J Abrams pulled with his Star Trek reboot, and the all-female casting is conspicuous for being the only change of note. Then again, who wants a modern Ghostbusters that avoids giving us Slimer, ECTO-1, and that theme tune? 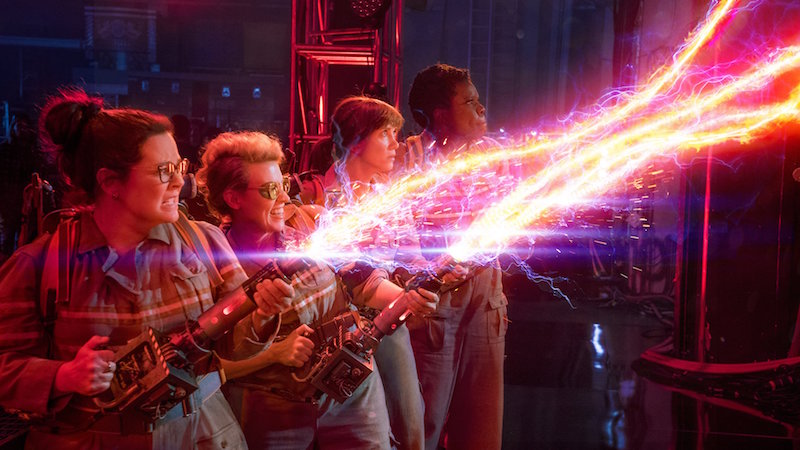 Feig’s Ghostbusters demonstrates the huge change in comedy since the mid-’80s. You don’t get films like 1984’s Ghostbusters, post-1997’s Men in Black. But it’s worth remembering (or admitting?) that Reitman’s Ghostbusters never had dozens of laugh-out-loud jokes. It has amusing moments and bags of charm (mostly from Bill Murray), but the script was played relatively straight. The humour usually came from poker-faced reactions to spookily surreal shit going down. Seriously, when was the last time you retold a joke from Ghostbusters in public? You didn’t. It was never about the jokes; they’re too contextualised. It was about character and concept. And what springs to mind about the original is the ghostly librarian, Venkman getting slimed, and the Stay Puft Marshmallow Man trudging through the streets.

These days, comedies are broader and more scattershot. In addition, ‘event films’ have ballooned in scale because of the massive expectations placed upon them. It’s understandable, then, that this year’s Ghostbusters falls between two stools—smothered by the need to copy hallmarks of the original, but unable to echo its tone, and thus forced to produce a cowardly do-over that’s just bigger and sillier. And nowhere is that most prevalent than Kevin the receptionist (Chris Hemsworth)—a gormless caricature, subverting the cliche of all-male films often having a token airhead? Is that shade thrown at Ghostbusters? Was Annie Potts’ receptionist a bimbo? 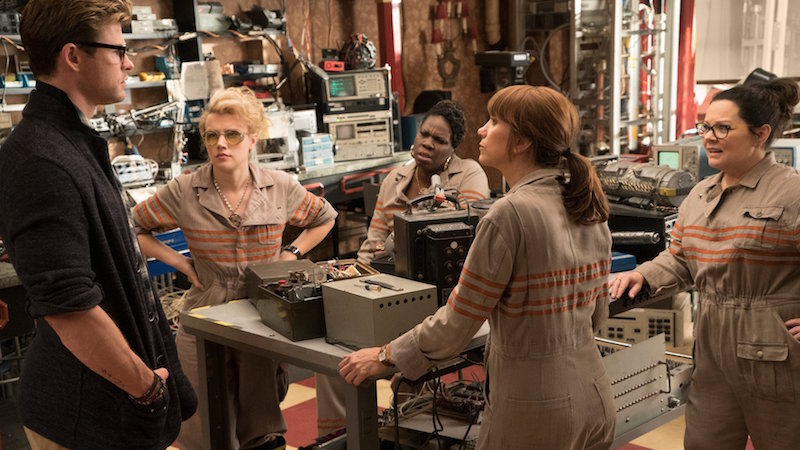 The setup is familiar. Erin Gilbert (Kristen Wiig) and Abby Yates (Melissa McCarthy) once co-authored a book claiming ghosts are real, which has resurfaced on eBay and halts her serious career path at Columbia University. However, Erin and Abby’s unorthodox views and science brains are required when spooks start appearing across the city. So, with the help of eccentric nuclear engineer Jillian Holtzmann (Kate McKinnon), who specialises in ghost-catching tech, and subway worker Patty Tolan (Leslie Jones), the ‘Ghostbusters’ hit Manhattan to stop whoever’s responsible for the surge in paranormal activity. Cue slime. Lots of slime.

1989’s Ghostbusters II was condemned for being a pale imitation of the original, so it’s disappointing Feig and co-writer Katie Dippold didn’t learn that lesson. Some crossover was to be expected from a remake of a cultural touchstone, but with the exception of ‘training scenes’ for the Ghostbusters, there’s very little here that felt new. It’s the old movie, with women and better visual effects. The ghosts are especially gorgeous and ferocious, while the choreography for their capture eclipses the ‘point and shoot’ tedium of the ’80s films. They’re perhaps a little too Scooby Doo in their neon luminosity, and Feig mistakes loudness for scares, but the movie’s energy spikes whenever one’s floating around. Even if a few seem to have escaped from a Pokemon game. 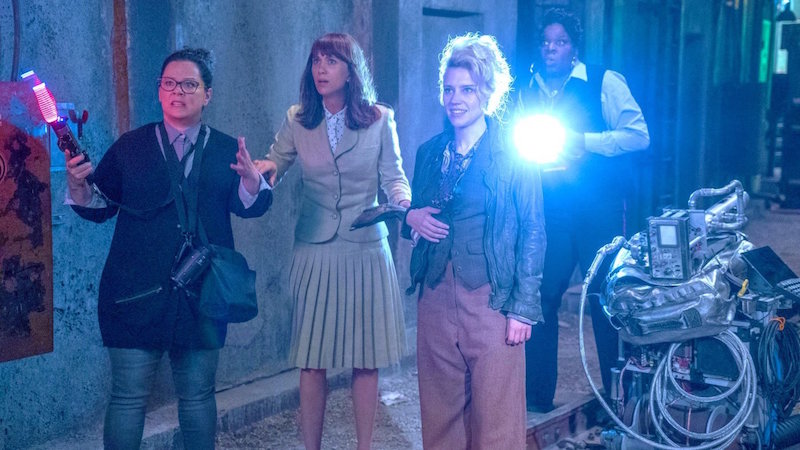 The casting is the least of the film’s problems, despite becoming a ridiculous bone of contention. Wiig is enjoyable as serious Erin; McCarthy brings her customary charm as stubborn Abby; Jones commits to an unfortunate ‘street smart black woman’ trope more deserving of criticism than her gender; but it’s McKinnon who leaves the best impression as Holtzmann, drawing your eye her way with every toothy grin, wink, and quip.

All of the main actors from the original appear in cameos to varying levels of success, but their appearances are indicative of the film’s ultimate problem. You can’t do a third Ghostbusters without paying tribute to the original’s core elements, but it means this film feels like a long and expensive Saturday Night Live sketch. Bill Murray gets the longest screen time as a renowned paranormal debunker, despite being famously negative about returning, and you wonder why they even bothered writing the limp scene he’s given.

I laughed at the new Ghostbusters. I enjoyed it, superficially. The effects were good and the actresses did well. But remove all the callbacks and there’s not much here beyond a visual upgrade. The story’s ridiculously simple (a straight origin story with no surprises), the nerdy villain winds up being a complete disappointment, and there are no subplots that build on the main story in significant ways (it sorely misses the Bill Murray/Sigourney Weaver romance, which lent emotional heft to the finale). And while I applaud the director’s decision to go all-female, did the motivation for everyone have to be pleasing various men—like Erin’s university boss and the city mayor?