The final two episodes of The Man in the High Castle’s second season gather up all the ongoing subplots, as Japan and Germany hurtle towards all-out war. There also appears to be a lot of housekeeping going on behind-the-scenes, and it becomes clear by the end of “Detonation” that some characters will not be returning for the third season.

The penultimate episode also puts pressure on Tagomi (Cary-Hiroyuki Tagawa) to return to his own timeline after Kennedy resolves the Cuban Missile Crisis. Shortly before the news announcement of Kennedy’s deal with Khrushchev, after a very tense period of negotiations, Tagomi’s son Nori (Eddie Shin) gathers friends and family to watch footage of nuclear bomb tests in the Bikini Atoll (as you do when the world is on the brink of nuclear calamity). Nori explains to Tagomi that what he’s seen is a weapon significantly more powerful than anything dropped on Hiroshima and Nagasaki. 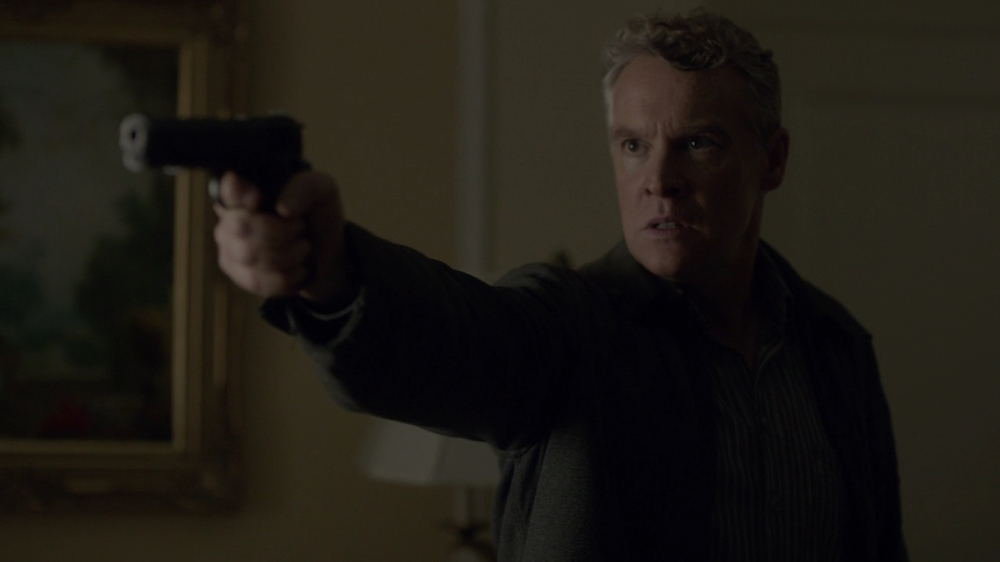 Family disputes having been settled, it seems Tagomi now has a duty to return to his own reality. Lessons have been learned and perhaps Tagomi can affect the outcome of the Japanese-German escalation. Juliana (Alexa Davalos) hands him the bomb footage, again underlying how the films throughout the series have manipulated and determined the outcome of each character’s destiny. They are divinatory visions, marking potential outcomes of the future across a series of universes.

After Tagomi returns to his own reality, what we’ve suspected for some time is confirmed when his associate Kotomichi (Arnold Chun) confesses the burns on his hands are from the nuclear detonation at Nagasaki in another reality. Not much more is made of Kotomichi’s own mission into this reality, and it almost seems like an afterthought to explain the burns and then not really pursue the idea of other multiverse travellers. Maybe this is what’s in store for us in the next season? 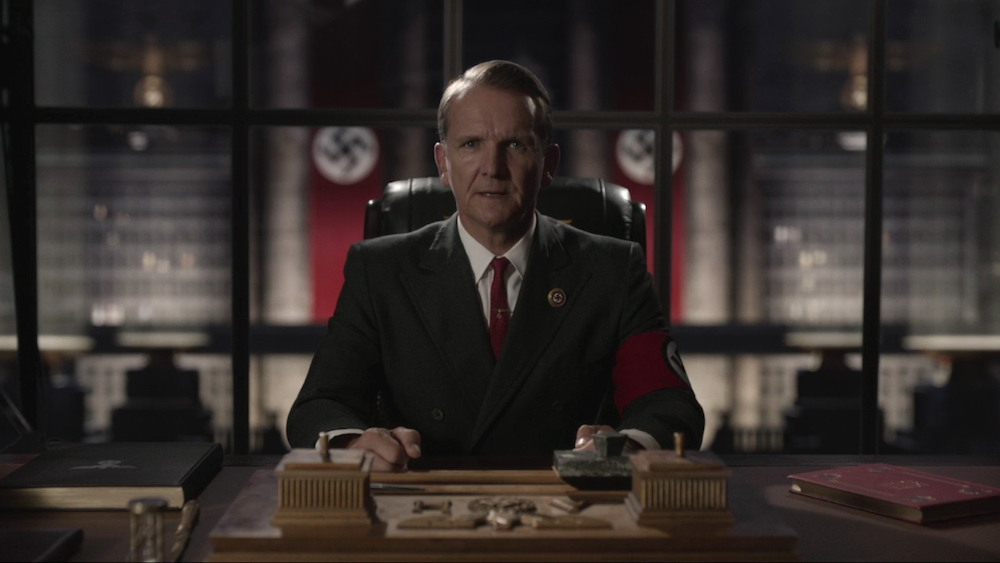 In the Reich, Juliana is playing her part in the Resistance. Now that she’s become cosy with the Nazi elite, she’s able to visit Lucy’s husband Henry (Kurt Evans), who oversees the television networks in New York, to alert him that his wife has fainted, is unwell and has been hospitalised. It’s a ruse to hold Henry to ransom, threatening to kill her and her unborn child if he refuses to make an emergency broadcast and announce on air that the Führer is dead.

It culminates in a scene that’s shown through the perspective of the domestic as Juliana returns home, having aided and abetted George (Tate Donovan) to kidnap Lucy and force Henry on the air, and switches on her television. An episode of American Reich is interrupted by this broadcast and it ends violently with Henry shot dead on screen after he tells the millions watching, “you’ve all been the victims of a lie.” The parallels with John Smith’s (Rufus Sewell) own sacrifice for his son Thomas (Quinn Lord) are there, too, as Henry gives his life to protect Lucy’s unborn child. Yet, even Lucy’s condition may itself be a lie used by George to push him into action. 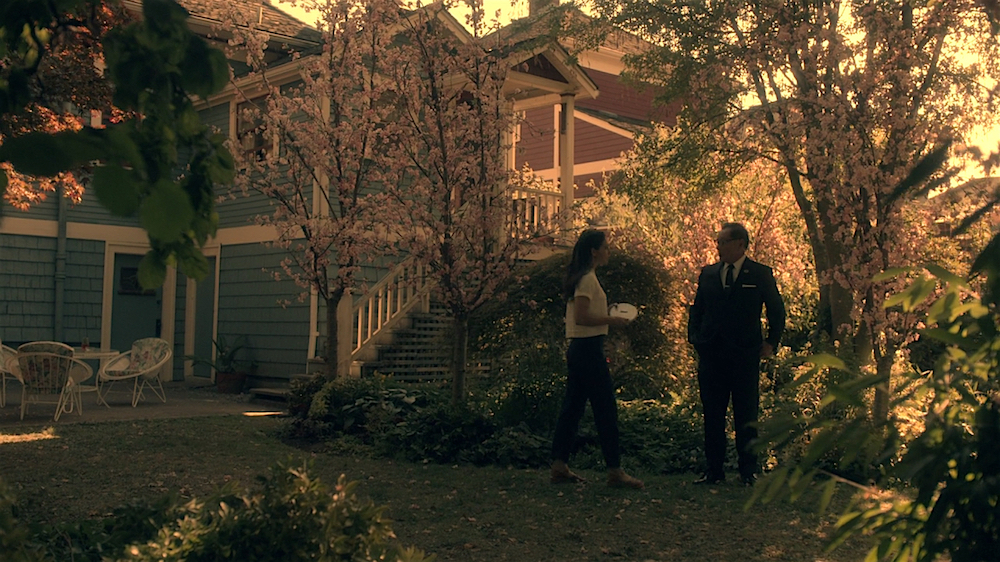 This also throws up a number of questions that’ll resonate throughout “Detonation” and the finale “Fall Out”. It leaves us asking ‘who are the fanatics and who are the fascists in this reality?’ — particularly as the Resistance embarks on a campaign of murder and betrayal. What does emerge is that the Resistance, a nondescript organisation that hasn’t really been given clearer representation or form in the series, is as cunning, deceitful, and as divided as any of the ideologies in this world. Juliana begins to learn that George and his cronies are willing to use her and then get rid of her just as easily.

Chancellor Heusmann (Sebastian Roche) orders John Smith to control the situation, and the Reich is forced to invalidate the revolutionary effects of the illicit broadcast, announcing that not only is the Führer dead but that a further investigation has revealed the Japanese poisoned him. An act of war is declared that throws everything out of balance and closer to conflict. John Smith, Joe Blake (Luke Kleintank), and Inspector Kido (Joel de la Fuente), all know that the Japanese didn’t poison Hitler and that this is simply a pretext for Heusmann to go to war and rule over the smoking ashes. Their gambit is how they’ll instigate a coup and remove him from power within the space of one episode, the finale “Fall Out”. 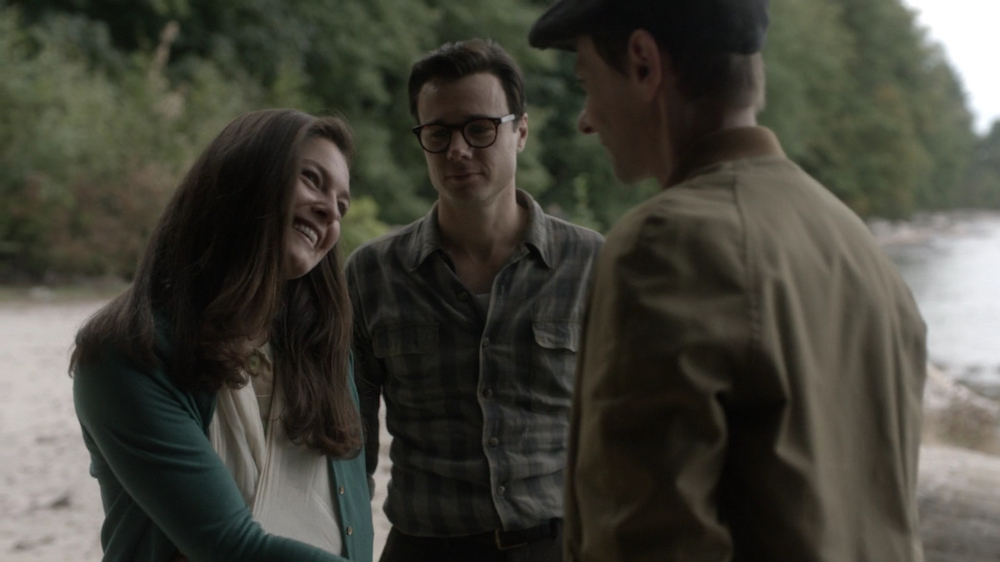 Roche does, alas, turn Heusmann into a bit of a Bond villain at this stage, but then his character disturbingly repels and attracts in much the same way. It is as disorientating as the episode’s bouncing between depicting Nazis as kitsch idealists and chilling barbarians where Nazi imagery goes into semiotic overload, both revolting and parodic at the same time.

In the Pacific States, Frank Frink (Rupert Evans) realises, from Childan’s (Brennan Brown) confession after waking from a nightmare, that the Kempeitai spared Ed (DJ Qualls) during the meeting with the Yakuza for an undisclosed reason. Ed is forced to confess that Inspector Kido has been using him to gather intelligence about the Resistance and Frank after threatening to kill Ed’s friends and family. This emboldens Frank into being the designated driver of a car bomb that Gary (Callum Keith Rennie) wants to use to destroy the Kempeitai headquarters as Japanese high command gather to plan their encroaching war with the Reich. 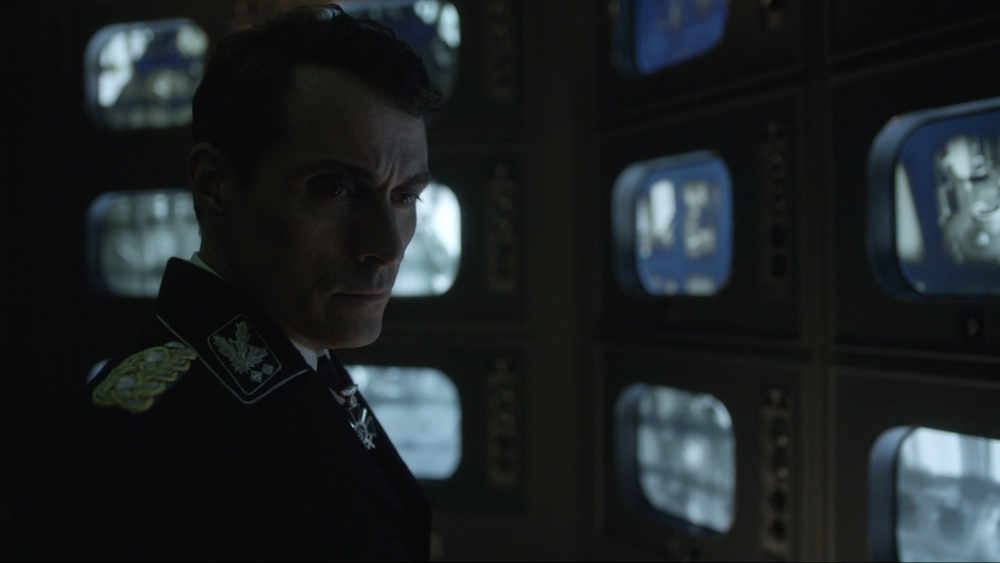 Back in Berlin, Joe Blake’s still trying on his own Nazi drag for size and is clearly impressing Nicole (Bella Heathcote) with his new attitude and sartorial demeanour. However, she makes a striking and interesting observation about his entry into the realm of fashionable barbarism: “I’m not sure you even believe in what the Reich stands for.” This also underlines the irritating way Joe always fails to nail his colours to the mast. He flip-flops politically, never really able to articulate his complicity with any ideological position. Nicole appears as a ‘progressive’ within the Nazi demimonde, adding further shades of grey to our mediation of the Reich’s ‘art’ and ‘facts’.

“Detonation” tends to expose The Man in the High Castle’s weaknesses at this point. It’s painfully obvious that characters and plot are being manoeuvred into place. Quite clearly, Frank is a goner now as he inevitably fulfils the narrative’s demand for a noble sacrifice. When Thomas Smith turns up at Juliana’s door and breaks down, believing his parents are hiding the truth of his illness from him, he’s clearly not going on that trip to the Andes to live happily ever after. He, too, is going to make a similar sacrifice. Their conversation has also been recorded and Smith manages to confiscate the recording, presumably to use as leverage at an appropriate juncture. 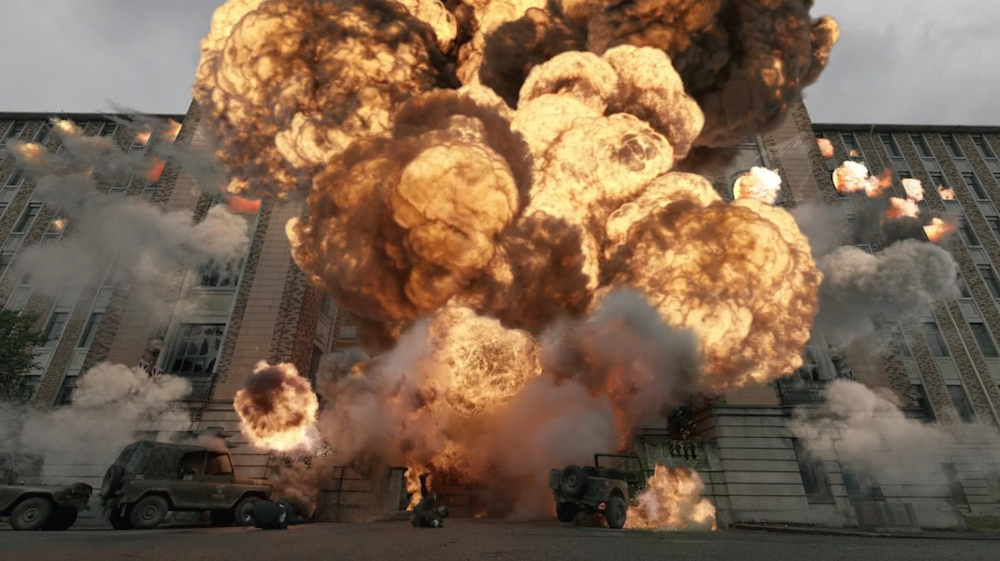 These are characters that the narrative no longer knows what to do with and along with Childan and Ed they are about to be ushered off stage in “Detonation”. Frank and Sarah pose as chauffeur and call-girl, the reasoning being that General Onoda (Tzi Ma) will welcome a visit from his ‘niece’, to gain access and drive the car into the Kempetai’s offices. As they make their way out of the building they unfortunately meet Inspector Kido coming in the opposite direction. After a gunfight, in which Kido is wounded, Frank and Sarah are both caught in the massive explosion that rips through the building. It’s a pacy, thrilling end to the episode that sees Tagomi also narrowly avoiding his own fate after his car draws up outside the building just before it is engulfed in flames.

The bombing wipes out Onoda but also, presumably, also removes Frank and Sarah from the story. Childan and Ed are seen on a bus crossing the Golden Gate Bridge observing the plume of smoke left by Frank’s dramatic act. Frank’s demise and Ed’s exit do seem final as the episode employs that other cliché: the flashback to happier times used as ‘life review’ when Ed gets nostalgic about Frank introducing Ed to Juliana for the first time. It’s an attempt to make the tragedy more emotional but it doesn’t completely work and I’m sad that we may never see the wry double act of Childan and Ed again. They livened up episodes considerably with their appearances.