If there’s one consistent theme in American Gods, it’s belief. The show is all about how faith in the Old Gods or the New Gods sustains people and gives them power. If you put your total confidence in the idea that these supernatural beings can control the world, then they can… but, without that belief, they become desperate and struggle, like Czernobog or Bilquis (Yetide Badaki) before she joined forces with the Technical Boy (Bruce Langley). The New Gods have been winning the war against their opponents because they think there’s no way the Old Gods could amass enough belief in this day and age, but “Come to Jesus” proves this may be a closer fight than they imagined.

The season finale starts with Mr. Wednesday (Ian McShane) and Shadow (Ricky Whittle) visiting Mr. Nancy (Orlando Jones) and asking him to make them some tailored suits to impress their next host. Before the suits are made, though, Nancy decides it’s time for a story. We launch into the latest ‘coming to America’ vignette, this time about one of the show’s most enigmatic figures, Bilquis, The Queen of Sheba and Goddess of love. 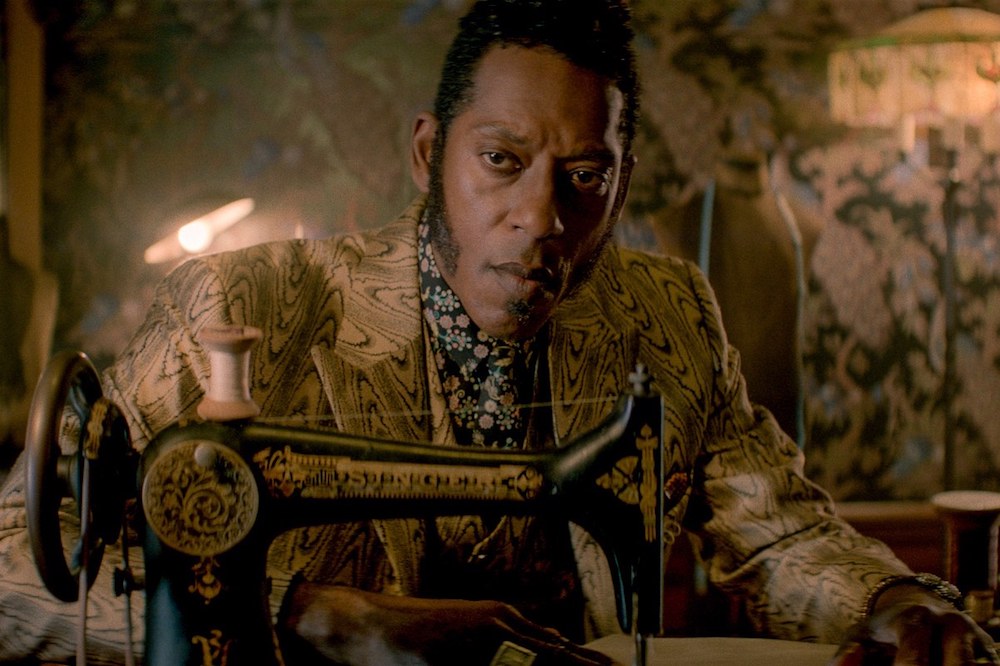 Bilquis’s tale might be the strongest of the vignettes so far (outside of last week’s extended flashback), as it expertly weaves tragedy and heartbreak into a short story that spans the ages. We see how she’s fallen from a position of a great power in the past, and how desperation leads her to take the Technical Boy’s offer of re-branding to give her a new relevance. It’s a decision that makes sense, especially when we see how much she’s suffered injustices in her life, and how much her fight for freedom and love has been under fire. Her worship now comes through a dating app, but it’s hollow and not what it used to be. The New Gods have given her “new meaning”, but it remains to be seen whether it’s really enough.

After that tremendous vignette to kick things off, the show continues with the journey of both Laura (Emily Browning) and Shadow. They’ll eventually converge at the estate of the host Mr. Wednesday is eager to impress, Easter (or Ostara), Goddess of the Dawn (Pushing Daisies‘ Kristin Chenoweth). It’s here we see what happens when a God is almost too popular, as the whole place is full of different versions of Jesus, including the “main Jesus” (Jeremy Davies) and other Mexican, Greek, Mormon, and Asian versions. Everyone generally seems to be enjoying the festivities on Easter’s big day, but it only lasts so long. Of course, the New Gods turn up at the party to challenge Mr. Wednesday, but it seems the Old God has more than a few tricks up his sleeve… 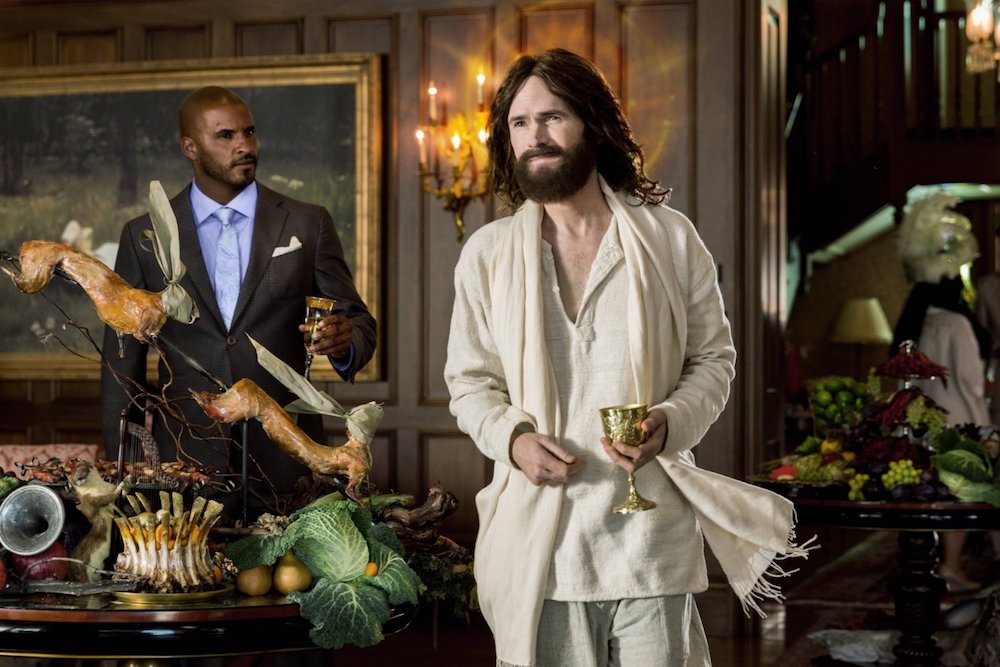 Even with a more straightforward structural approach, some of the persistent problems American Gods has still remained. The show often withholds details pertinent to the story, and while this episode answers questions, it also leaves us with more. It’s also a somewhat unsatisfactory episode for Shadow, as the protagonist, because he’s yet to be an active force in the ongoing plot. The slow-burn pacing can often be infuriating, and while the performances are fantastic and this week’s climax is impressive, it still doesn’t feel like an episode that fully works. 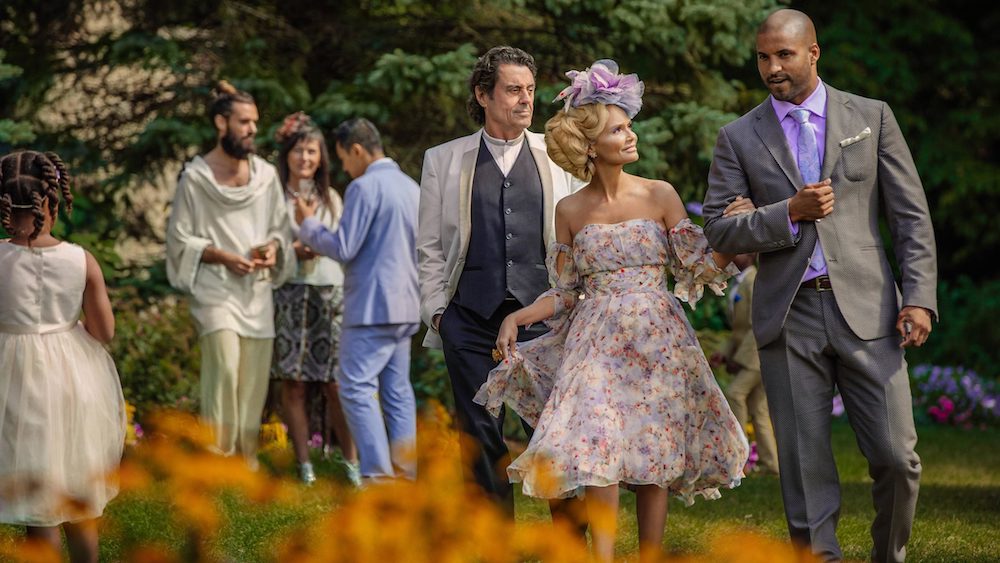 Laura Moon, however, continues to be the standout character and has a terrific conflict ahead of her. When Ostara reveals she can’t be resurrected because she was killed by a God, she forces Mad Sweeney (Pablo Schreiber) to admit he ran her off the road on Mr. Wednesday’s order. It’s something she’d begun to work out, but needed to hear to truly believe. While the climax shows the extent of Mr. Wednesday’s power (and confirms that he’s the Norse God Odin, which was very predictable), we also know how powerful Laura is… and the revelation of his manipulation sets Mr. Wednesday up as her adversary. Shadow may, finally, believe in his boss, but what will he do with the information Laura has on him?

In the end, Mr. Wednesday uses the power of lightning to sacrifice some of the goons assisting the New Gods, paving the way for Ostara to take back the Spring and leave all of America in a drought until they pray to her again. It’s a strong reminder that the New Gods might have amassed great control and significance, but the ability to control the natural world is beyond them. Whether this gamble will work out for the Old Gods remains to be seen, but it’s far and away the most exciting and consequential thing that’s happened in the series so far, and sets up interesting potential stories for the second season. 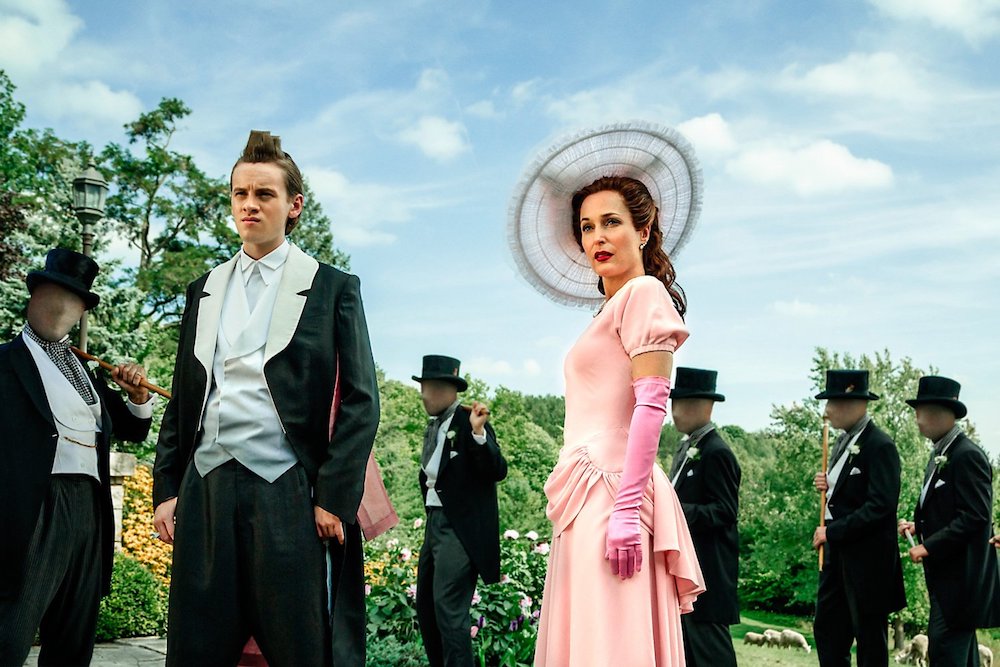 Showrunner Bryan Fuller has revealed American Gods will have a “much more exciting arc” next year, with a faster pace and 10 episodes rather than 8, which suggests he’s aware of some of the key issues with this first season. There’s a lot that is promising about this show, but it speaks volumes that it’s two best episodes, “Git Gone” and “A Prayer for Mad Sweeney“, are the most focused and disconnected from the central plot. Shadow’s journey as Mr. Wednesday’s bodyguard/assistant has only worked sporadically, and these main characters will need to be much more defined and compelling to hold viewers’ attention when the show returns.

Ultimately, the first season of American Gods only held together occasionally, but was wonderful when it did. Its high points contained some of the most remarkable storytelling one could find on the small screen, but it wasn’t a smooth journey. At its best, it’s the kind of visually bold, fascinating, and character-driven series that so much prestige TV aspires to be. But, at its worst, it’s been unstructured, pretentious, and needlessly confusing. Both the effective and less effective traits are on display in this generally solid finale, but it’s still clear there’s  room for improvement in season 2…

Let’s pray it can solve its issues.