Despite being the latest addition to the ever-growing list of sequels and remakes, Antoine Fuqua’s The Magnificent Seven escapes the damning accusations of ruining childhoods, and rabble-rousing claims it “pushed a liberal agenda” by recasting the original all-white male cast with actors from ethnic minorities. In this day and age, films too often come with the background noise of misleading polemic thoughts, forcing us to second-guess why we’re having a good time. That’s not the case of the new Magnificent: it’s no-strings-attached fun, free to be enjoyed or disliked without paying heed to PR-orchestrated controversies or improper comparisons with the source material.

Although the original Magnificent Seven (1960) was not an immediate hit (it barely made a profit when first released), it has surged to the status of “vintage” over the years: generally liked, remembered as a genre-defining feature, but not enough of a cult to inspire true fanatism. Given how well it worked as a crowd-pleaser back in the ’60s and onwards, there’s no reason why a capable director like Fuqua can’t build on that success and achieve the same result with today’s audience. Maybe his remake won’t be the kind of film dads show their children during a lazy afternoon when it pops up on local TV, but it’s hard to imagine a feature more worthy of the ‘popcorn movie’ status. 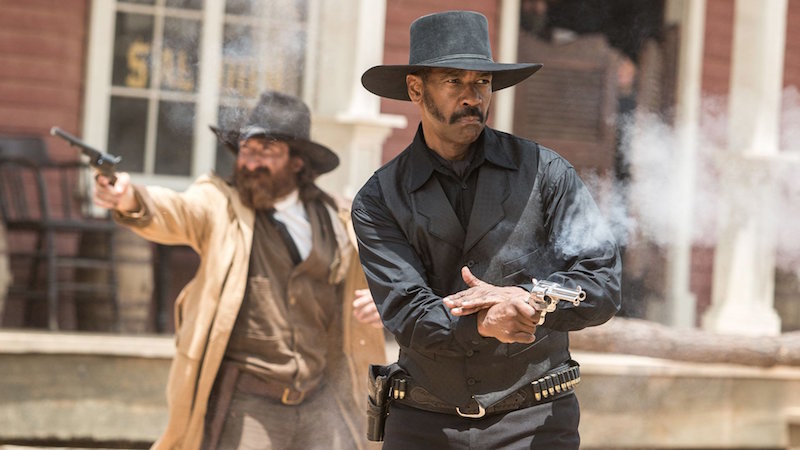 The original Magnificent is usually remembered for two, possibly three things. First is the stellar cast, featuring Hollywood legends Yul Brynner, Steve McQueen, Charles Bronson, and Eli Wallach; then, of course, the unforgettable score by Elmer Bernstein. Thirdly, the schoolbook notion that the film is itself a remake of Kurosawa’s Seven Samurai (1954). Sadly, the soundtrack of the 2016 version doesn’t live up to expectations (composer James Horner died before completing this score, which was then co-composed by Simon Franglen, known for Avatar and producing Titanic’s “My Heart Will Go On”), but the lineup includes Denzel Washington, Chris Pratt, Ethan Hawke, and Vincent D’Onofrio. They may not be as iconic as their Swinging Sixties counterparts, but their ensemble chemistry works. Denzel plays the badass gunslinger (effectively reprising his role from 2014’s The Equalizer , also directed by Fuqua); expectedly, Pratt is the comic relief, along with D’Onofrio’s irresistible, bear-like character. Hawke, working again with Fuqua after 2001’s Training Day, is the troubled confederate sharpshooter in cahoots with knife master Billy Rocks (Byung-hun Lee). 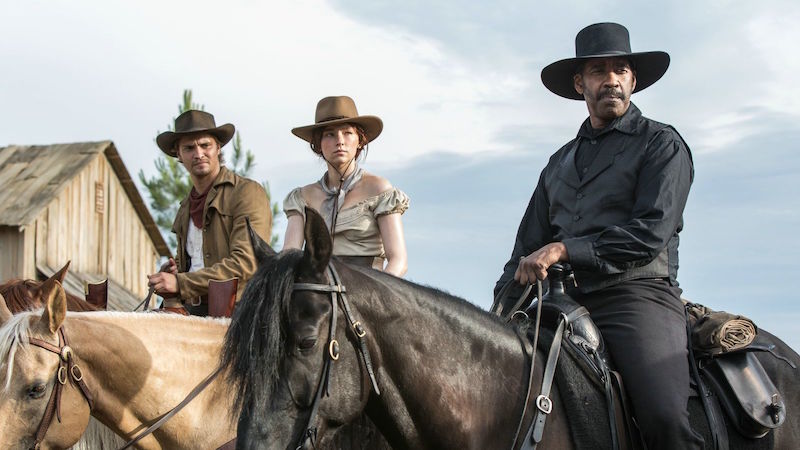 The plot follows closely from the original: a village of poor farmers and miners is seeking help to defend itself from the threat of an evil group of bandits. In this version, the bandits have the more institutionalised face of corrupt industrialist Bartholomew Bogue (Peter Sarsgaard). It’s impossible for him to replicate Wallach’s charisma, so the part is justly re-written to make him despicable enough to deserve what he’s got coming for him. What’s missing is the clash between the villagers’ longing for freedom and their fear of the raiders: the 1960 film intelligently focused on their cowardice and acquiescence, which helped a lot in developing the characters. Fuqua favours action, and while that works very well (the execution is spotless), the film drags a little too much in the central, character-driven parts; relying on one-liners and gags, to feel a lot more episodic.

This choice seems to be the inevitable price to pay for remaking the film in a way modern audiences will find captivating. Still, a lot of the original material remains, and Fuqua doesn’t shy away from the occasional reference or the blatant genre trope. His variations, on the other hand, are not just a lazy update: they bring a welcome and interesting change of perspective on the tale. The Magnificent Seven is as slick and entertaining as its predecessor; it doesn’t strive as much as it should, but it has more dynamite.