There’s a great joke in the perennially underrated cult comedy Garth Marenghi’s Darkplace (2004) in which the producer of the dodgy show-within-a-show, Dean Learner (Richard Ayoade), says “there’s a lot of slow motion. The episodes were running up to eight minutes under.”

It’s funny because it’s true. It’s not hard to spot when a horror film’s ‘artistic’ choices are just shameless padding to achieve a certain runtime. The Prey (1983) is a peculiar one because it’s not slow motion or even inconsequential scenes thrown in to fill out its lean 80-minutes. Instead it’s endless, exhausting footage of wildlife. Racoons, snakes, bees, owls… all are captured in the bafflingly long takes dropped into the film at seemingly random intervals. Yes, if anything distinguishes The Prey from the run-of-the-mill glut of woods-based-slashers of the 1980s, then it’s how you’ll definitely what a frog looks like by the time it ends.

The Prey‘s story, such as it is, follows six interchangeable young people heading into the woods of Idyllwild, California, for a camping trip, only to be picked off one-by-one by an unseen lunatic who was badly burned in a fire decades prior. Lost for years in VHS limbo, Arrow Video have worked their resurrection magic to deliver about as complete a package of The Prey as anyone could reasonably ask for.

The film was shot around the same time as Friday The 13th (1980) but was shelved until Jason had firmly established that killing promiscuous teens in the woods made for a profitable subgenre. The comparisons to Friday The 13th are unavoidable here, but even besides that genre classic, The Prey hardly stalks alone: The Burning (1981), Madman (1982) and Sleepaway Camp (1983) all revolve around an almost identical premise, but each has something more to offer than The Prey. 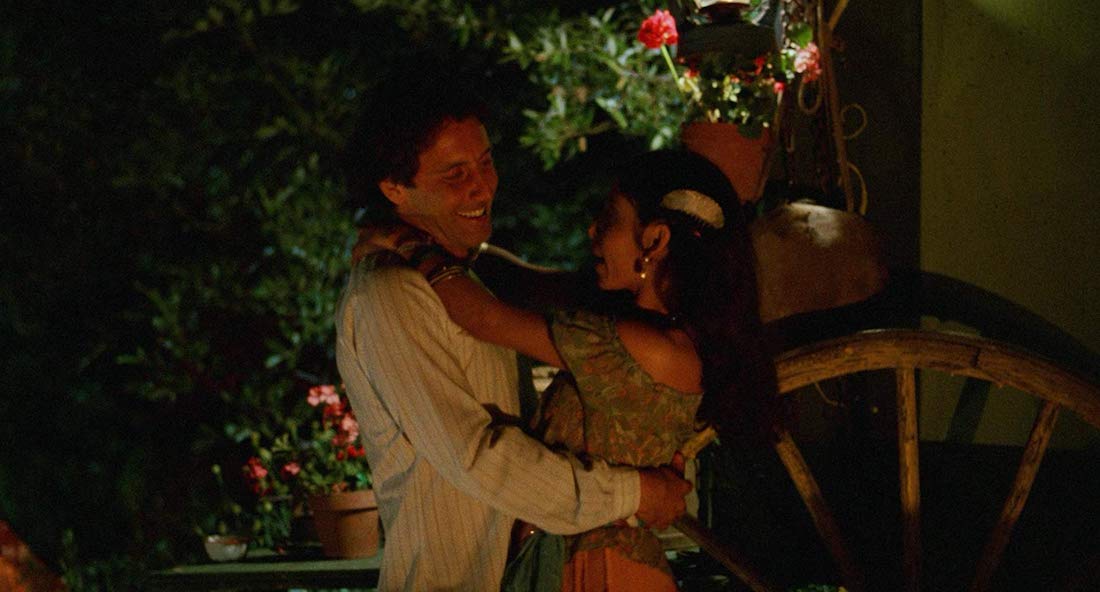 The film opens with what’s to become its most recurring theme: stock footage. A forest fire blazes in 1948 while some awkwardly edited screams fill the air. The film’s strange construction requires us to fill in the gaps constantly, so little does it show or tell us, but we can glean this fire was started by the unseen killer of the film on a path of violence because… well, that’s another gap we have to fill. Perhaps it’s because he’s tall and slightly burned? Or perhaps because something, anything has to begin the kill-count.

He’s a killer so generic that (as played by Carel Struycken, later of Twin Peaks, Men in Black, and The Addams Family fame) when we do catch a glimpse of him, we might as well not have. Anyone’s imagination can do better than the Scooby Doo-style monster we’re faced with. At least those were supposed to be masks.

The half-dozen teens the killer has arbitrarily targeted aren’t so much under-written as un-written. They can barely be described as characters. Meandering shots of them walking through the woods in virtual silence are extremely patience-testing. In one of the bonus features included on the disc, actress Debbie Thureson (Nancy) claims “they should’ve given us lines. They said ‘talk about whatever, we’ll muffle it out’”. She’s correct. When the film decides to spend some time listening to them, these people have nothing to say and we learn nothing about them. There’s no in-group dynamic or tension and little distinguishes them. They’re walking slabs of meat without the nutritional value.

At one point, Gail (Gayle Gannes) nearly gets lost from her group because, for no apparent reason, she’s decided to stop and brush her hair for a few minutes. This is the closest the film gets to characterisation. Writers Edwin and Summer Brown are clueless as to what to do with their characters in-between kills and give them almost nothing to react to. Look at the hour mark for most slashers and you’ll find the film ramping up the tension and firing up the third act. But the characters in The Prey haven’t heard or seen anything scary at that point. The film has given them absolutely nothing to do and no problems to work through. They’re not surviving, they’re wandering.

And so, a full hour into the film, with only 20-minutes left, the surviving teens are still carefree and jumping into lakes to splash each other with water. It’s maddeningly slow and hopelessly weighed down by terrible pacing. To make matters worse, impatient editing can’t seem to stay with a scene for more than a few seconds. There are dodgy jump-cuts, the aforementioned wildlife clips never let up, and entirely random inserts. After one of the film’s generic kills, we inexplicably cut to a shot of Mountain Ranger Mark (Jackson Bostwick) sitting in his cabin, staring at nothing. It’s edited as if the film is on shuffle. 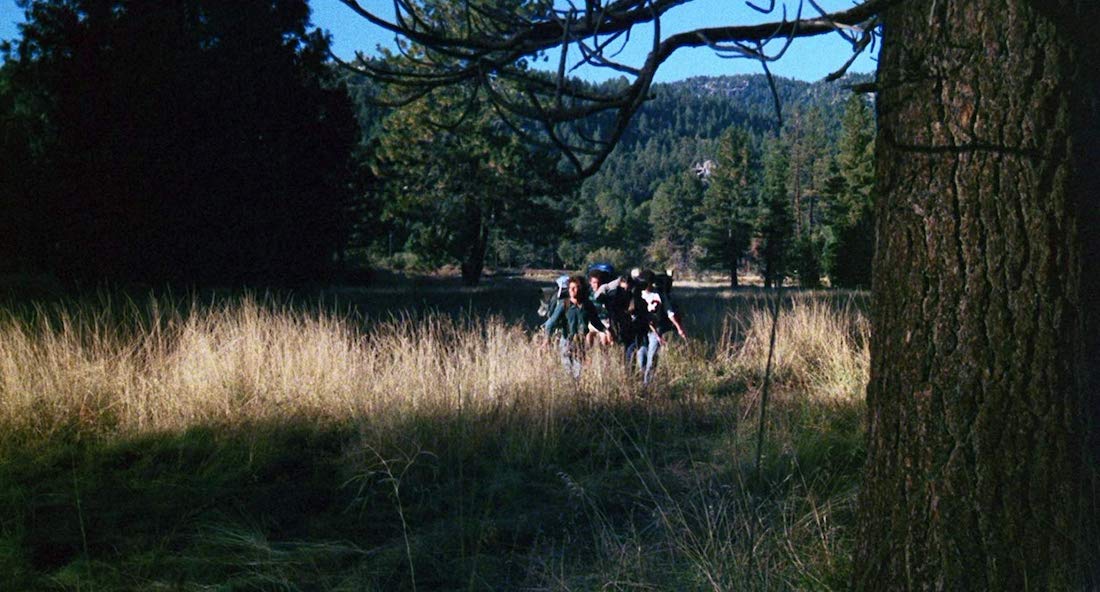 Later, Mark (who looks alarmingly like Zac Efron as Ted Bundy) treats us to a banjo solo, an addition to the proceedings that seems like the most offbeat suggestion of a writer truly out of touch with what a drive-in movie theatre audience want on a Friday night. Blood, breasts and… banjos?

All of this is utterly strange but could be mitigated if the film boasted the most fundamental requirement of a slasher: great kills. There are none to be found here. The kills are at worst laughable (smothered with a sleeping bag) and at best perfunctory (a throat slash here, an axe chop there). None of them looks particularly good and every one occurs with a lackadaisical manner. Nobody seems to put up a fight, almost as if they just want to get out of the proceedings as quickly as possible.

As Arrow Video has proven, some of the poorer cult oddities can, if nothing else, be good for a laugh. And as promised, the film ends with an unintentional giggle-inducer, a familial coda that’s so stupid and unannounced that you almost wish the film had a sequel just so it could follow up that nonsensical idea. This is a cheap film in every sense of the word, but to horror aficionados, cheap doesn’t necessarily mean bad. Cheap can be cheerful. It can be inventive, and endearing. So perhaps cheap is the wrong word. Maybe the right word here is lazy. The script is a first draft given no re-writes. The direction is barely functional and the scares non-existent. So poorly filmed it’s without irony, the best thing is the pointless wildlife footage. Remove those shots, edit them together into a 15-minute short and you’ve got a perfectly pleasant nature documentary.

Unlike Friday The 13th‘s take on promiscuity and tall tales, or Sleepaway Camp‘s iffy but interesting take on gender, The Prey doesn’t have any perspective of its own. Even the leanest of horrors get at something but it’s hard to find anything of substance here, and the lack of fun it has in the wilderness makes it a chore to get through, besides the very occasional chuckle. 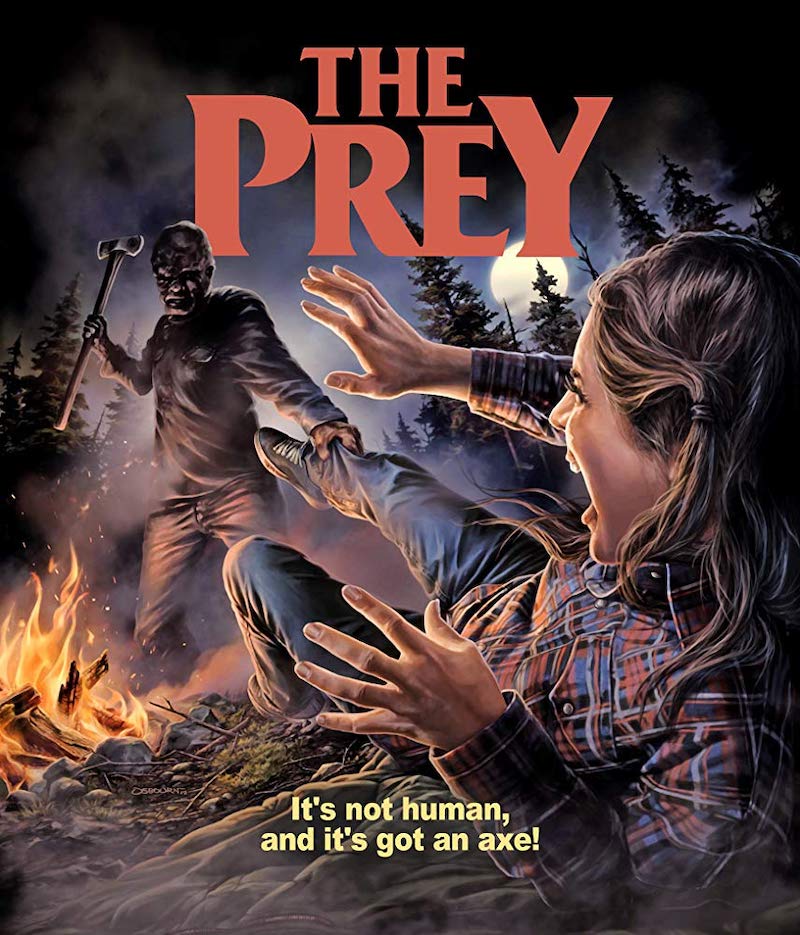 However, ever-dependable, this is another solid Arrow Video package and the release is far better than the movie itself. The 2K restoration makes the film look more expensive than it really was, and they’ve managed to cobble together three cuts of the film: The ‘US Theatrical Cut’, the ‘International Cut’, and a composite of both. Combine this with an impressive restored and uncompressed mono audio track and a litany of extras and you have another excellent Arrow release. There’s no doubt more effort was put into this Limited Edition release than was put into the original film back in ’83.