Most doubts I had about Westworld last week (of which there were few) were washed away by its second episode, “Chestnut”; a remarkably confident and engrossing hour of intelligent, carefully constructed science fiction. I already love how this show doesn’t seem to be stretching out the story, but is plowing ahead and letting us know there are lots of hidden depths and secrets to discover. In fact, echoing what park creator Ford (Anthony Hopkins) told his head of narrative, the guests don’t come back for the obvious thrills Westworld can provide… they come back for the subtleties. It felt like showrunners Jonathan Nolan and Lisa Joy were talking to us, their audience, at the same time. Everyone expects certain boxes to be ticked with a Westworld television series about malfunctioning cowboy robots, but it’s the smaller things that are proving the most enticing.

The premiere spent an unexpectedly large chunk of time behind-the-scenes of Westworld, with programmer Bernard (Jeffrey Wright) and many of his team going about their day. This week, the action shifted to the angle on something most expected from the beginning: the paying customers the park is built to entertain. Specifically, two friends with very different approaches to spending time inside the enormous Westworld facility—of which it’s still unclear if they’ve bought a large area of America to populate with robots, or something sneakier is going on. Regardless, we met handsome and super-confident Logan (Ben Barnes), a frequent visitor to the park who uses it to indulge his violent desires and sexual fantasies—killing “people” who so much as look at him wrong, having threesomes with nubile young women. Contrastingly, we also met William (Jimmi Simpson), Logan’s quiet workmate who’s new to Westworld and treats everything and everyone with respect and decency. Maybe everyone does, to begin with, until they start realising there are no real penalties for acting abhorrently in Westworld? Or is there, the further out from town you venture? 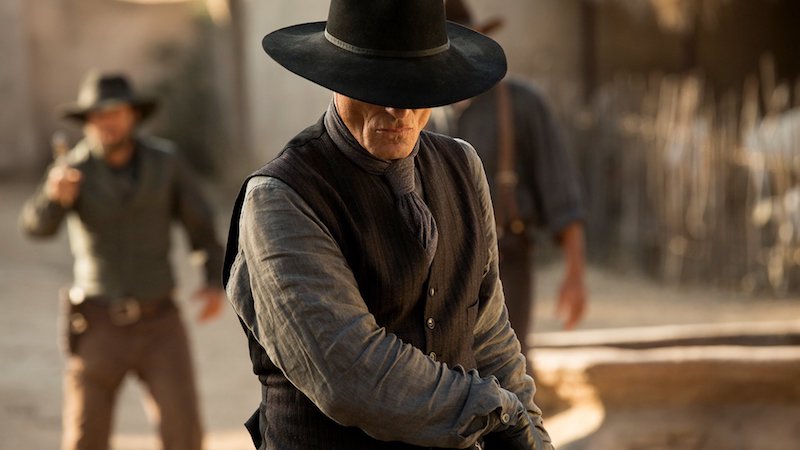 It was a great idea to have Logan select a ‘black hat’ and William a ‘white hat’ from their bespoke wardrobes, as they clearly have opposing attitudes that will presumably lead them down diverging paths. Logan’s sleeping with prostitutes and stabbing men through the hand during dinner, because he only sees the Hosts as automatons designed to satisfy his power fantasies; while William is genial, courteous, and later takes an instant shine to Dolores (Evan Rachel Wood). I look forward to seeing how these unlikely friends progress through the “game”, but would presume we’re going to see an arc where William discovers he’s a much better and stronger man than his alpha male guide.

The deeper mystery of the park was also returned to and a few things clarified. While there was some ambiguity last week, it seems clear that The Gunslinger (Ed Harris) is definitely a human guest who’s been coming to Westworld for decades and has grown to enjoy it more than the real world. There is order and purpose to the park because of its narrative structure, but he’s become obsessed with a theory that Westworld hides a “deeper narrative” that only frequent guests would even begin to suspect exists. 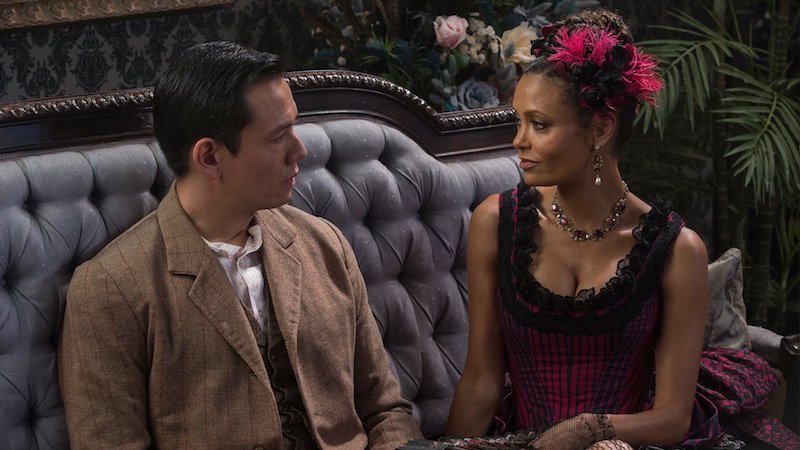 And it seems he’s right on the money, after preventing a Host criminal called Lawrence (Clifton Collins Jr) from being hanged and trying to force his new travelling friend into revealing the entrance to the maze he found inked beneath another robot’s scalp. He did this by killing Lawrence’s wife, but it was his daughter who seemed compelled to reveal the maze’s whereabouts—suggesting that all of the Hosts have this secret knowledge stored deep in their heads, but it can only be prised out of them with pressure on particular psychological weak spots. But if so, who has created this narrative beyond the narrative, and why? The prime suspect must surely be Ford, who seems to be literally God-like inside Westworld — able to freeze a rattlesnake mid-strike with a simple hand gesture. But isn’t it too obvious to make him the show’s puppet master? There must be a lot more going on. Maybe he once had a partner who created Westworld with him? Someone who created lots of “back doors” and “secret areas” for guests to discover, in the same way that programmers hide special levels and characters inside video games.

Maeve Millay (Thandie Newton) was involved in last week’s premiere, although I didn’t get a chance to mention her sassy character, but “Chestnut” was her hour to truly shine. Initially, she was part of a subplot that seemed to only exist to show how carefully Westworld’s operators tailor the experience for their human customers, as her madam of the local brothel came under scrutiny for failing to lure enough male clientele. It was fun seeing the kind of micr0-management that goes on, with programmers fiddling with Maeve’s personality settings to make her more desirable to the opposite sex. But, ultimately, she was this week’s latest malfunction—awakening on a table about to go under the knife, left to stagger naked around the Westworld control centre and witness nightmarish images of “people” being repaired and thrown around like mannequins. It was upsetting to imagine what Maeve must have thought when confronted with the reality of her situation, being a 19th-century woman thrown into a 21st-century horror show, for all intents and purposes. 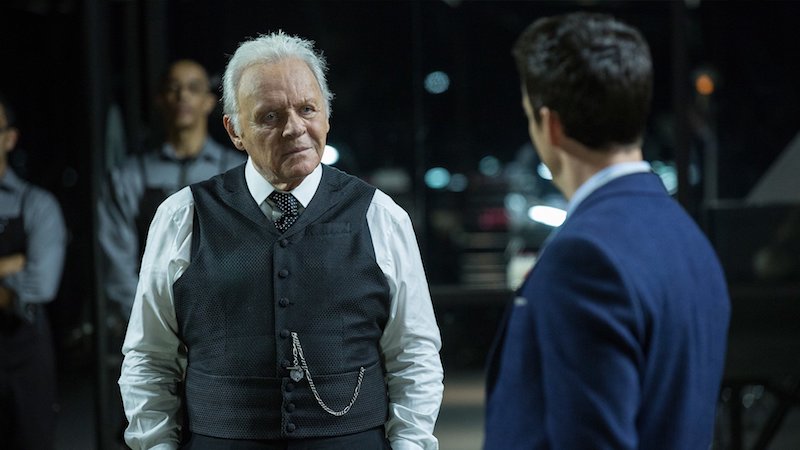 And in perhaps a slight nod to Philip K. Dick’s “Do Androids Dream of Electric Sheep?”, the idea of Hosts being able to dream was scoffed at by a few eggheads, but it seems their past memories have indeed created an accessible dream state for malfunctioning Hosts. Maeve “dreamed” she was a single mother, fending off a vicious attack by Native Americans, only for The Gunslinger to show up looking to claim her scalp (an early clue in his quest to find the map of the maze, one presumes). So what piece of the puzzle did Maeve’s scalp reveal? And just how long ago did that happen?

One thing I’m still not convinced by is the lack of tension and drama for The Gunslinger, in the sense that he’s essentially free to do whatever he pleases inside Westworld because he’s human. The Hosts are programmed not to harm him (they only shoot blanks), and other humans appear to have been given rigged weapons that won’t work when aimed at real people, so The Gunslinger is essentially untouchable. I know that will change when the show reaches a point when control of the facility is lost and the Hosts rebel against their creators, but I’m not expecting that to happen for many episodes… or maybe even a couple of seasons? It’s hard to predict what the larger arc of Westworld is going to be, which is another wider concern of mine. This still feels like an excellent miniseries, not a TV show with an indefinite lifespan.

However, it’s hard to complain when the first two hours have been this good. Long may it continue.

Written By
Dan Owen
More from Dan Owen
A high school student is accidentally sent 30 years into the past...
Read More