Do you like your meticulously-paced and superbly-shot action movies with a side order of bleak nihilism? You’re in luck: Denis Villeneuve’s Sicario may well be the film for you. But while there’s no doubt this thriller is highly accomplished in many ways, you should be warned it’s not for everyone. It’s wilfully vague throughout; shadowy in the telling of its story, and carrying a depressingly truthful message about a spiral leading to the loss of humanity and morality. While the subject matter’s outwardly about bringing down a Mexican drug lord, Sicario reveals itself to be considerably more complex and more unconventional, and the tone it maintains could be uncomfortable for some viewers.

As the posters and trailers have informed us, the word ‘sicario’ means ‘hitman’ in Mexico. The relevance of the title, though, remains uncertain for much of the film as the story almost delights in holding back from revealing its secrets. It opens with the most impressive and shocking scene, as a team lead by FBI agent Kate Macer (Emily Blunt) and her partner Reggie (Daniel Kaluuya) raid a house in Arizona searching for hostages, but only discover decaying corpses. It’s a scene that starts out exciting but turns sobering, and it makes it clear that Kate’s just cleaning up after a brutal war going on elsewhere. Soon, though, the idealistic agent is offered the chance to make a real difference by Matt (Josh Brolin) and his inter-agency task force taking the battle to cartel boss Manuel Díaz (Bernardo Saracino). Matt’s not very forthcoming about what his plans are, however, and as we see the story through Kate’s eyes we spend much of it in the dark. 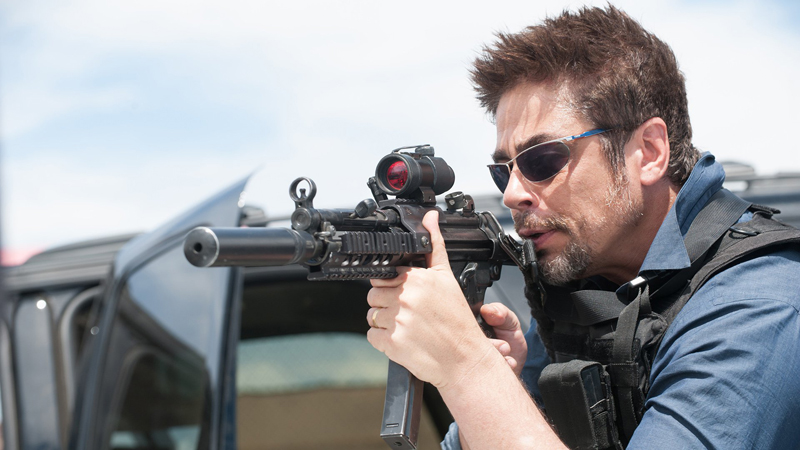 But that uncertainty’s partly what makes Sicario such an exciting and challenging film. Blunt is perfectly cast in the lead; her frustration over her lack of knowledge about what exactly is going on mirrors our own. Benicio del Toro plays Alejandro, another character we’re given little information about (other than he’s a specialist hired to help with Matt’s operation), but gradually learn more about him while seeing how violent and unforgiving he is. Until much later, we stick with Kate and try to fit the puzzle pieces together about why Matt and Alejandro’s plan is “to dramatically overreact” as Matt describes it.

Matching the uncertainty of the plot, Jóhann Jóhannsson’s exceptional score is a thumping heartbeat of percussion and high-tempo sounds. Sicario elicits a huge amount of intensity from its music and sound design, which often feels like a never-ending crescendo. It just builds and builds, putting the audience increasingly on edge but never allowing them the relief of an obvious conclusion. The first scene in which the characters venture into Juárez, in a convoy of armoured vehicles protected by the Mexican police, is a great example of this; as the sounds of the world around them, and the accompanying pounding music, gradually merge into one for maximum effect.

Thematically, the story is less about the struggle to win the drug war than one might expect. It goes without saying that winning is a hopeless cause. Sicario doesn’t see the drug war as something that can be won. It doesn’t see it as a situation that can be understood or even curtailed in any lasting way. Maybe, Matt says, these various agencies might be able to bring about some measure of control to the cartel war, but it’s a risky hope that doesn’t ever feel convincing. In the end, this story is more about the moral compromises you make when attempting to grasp chaos. What happens when you stop following the rules or existing protocol? What is the state of law enforcement when the decision to ignore said rules has come from someone more senior? These are the questions Kate struggles with, as somebody who wants to do things by the book but who keeps finding herself hitting walls and being told that these aren’t choices she gets to make. 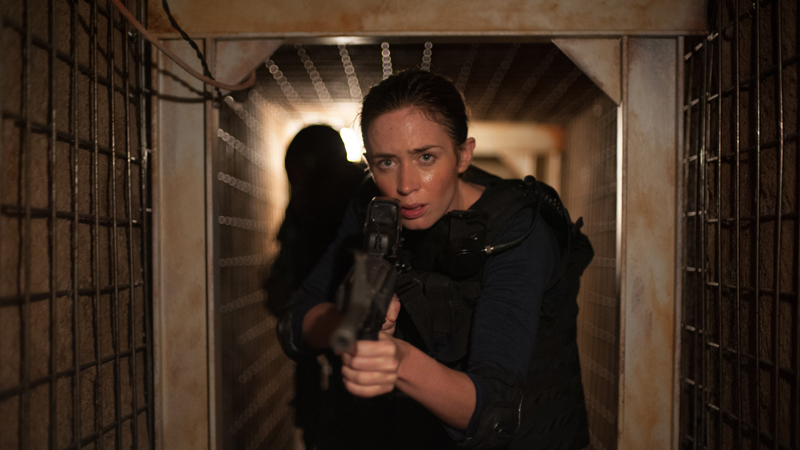 It’s worth saying that Sicario doesn’t feel like a typical movie about government agencies tackling a drug lord. It feels more like a war movie. Most of the action takes place in Juárez and the film goes to great lengths to make it feel like a battle zone; even giving us glimpses of a family within the city who seem disconnected from the plot entirely… until close to the end. It’s easy to draw a comparison with Zero Dark Thirty, really, as both films are interested in exploring the ways in which organisations allow themselves to bend rules in extreme circumstances. Aside from the narrative similarities, the visual language of war movies is all over Sicario; the cinematography from Roger Deakins is superb and full of unnerving imagery and gorgeous, inventive camerawork that brings every scene to life.

Sicario is violent and brutal, but the real focus is on the emotional cost; the loss of logic, reason and humanity that comes with being deeply embroiled in conflict. It’s hard to be prepared for just how intense the experience of watching this play out is, as you view and understand events from a single character’s perspective. The tension never lets up after the incredible opening, and while the pervasive ambiguity might be infuriating for some it’s difficult to argue Sicario is anything other than essential viewing.