This was a deceptively clever episode, helping connect some dots between the present-day Jimmy McGill (Bob Odenkirk) and his Slippin’ Jimmy days back in Chicago, pulling cons with his best-friend Marco (Mel Rodriguez). The cold open was a flashback to a time when Jimmy and Marco recovered some old coins from his father’s abandoned store, which we know he’ll use for some scams we’ve already seen back in season 1’s flashbacks. The scene also gave us Jimmy’s perspective on Chuck’s (Michael McKean) tale to Kim (Rhea Seehorn) in season 2, where he revealed to her that Jimmy stole money from their father. In Jimmy’s mind, his father was one of life’s doormats and his honesty was what made him so. Chuck decided to blame their father’s death, at least partly, on Jimmy’s thieving, but the deed was more low-key and innocent to Jimmy. And while it’s the root of Chuck’s disdain for his brother, Jimmy’s relationship with his “soft touch” dad is a key reason he refuses to be pushed around in a similar way. Nice guys finish last, so why aim to become one in life? 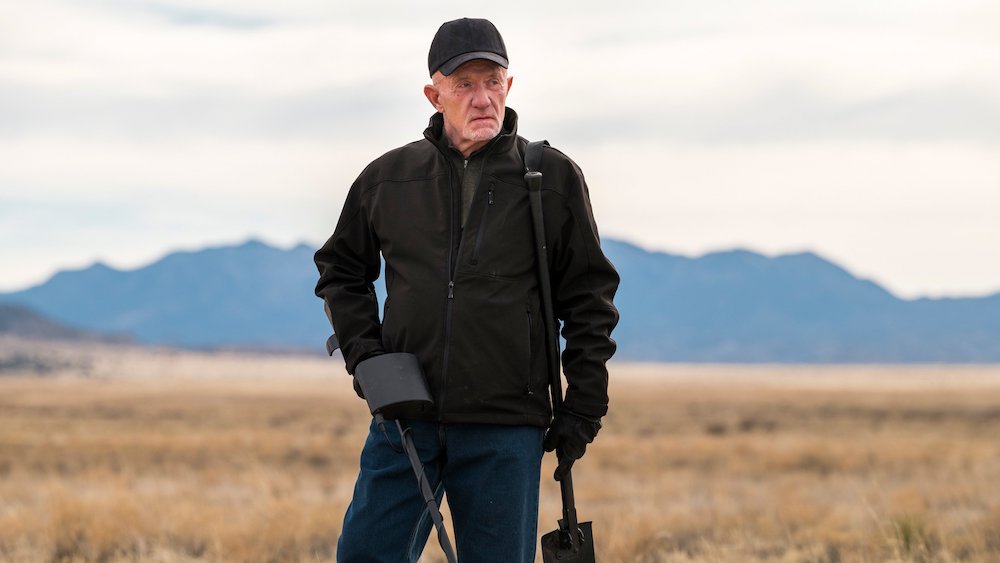 I really liked how some of the Slippin’ Jimmy persona is coming back in the present, and helping Jimmy get out of a few problems. “Saul Goodman” is yet to be adopted as a whole new identity for Jimmy, but “Slip” was a notable step forward in the arc of this character. Still struggling to earn back the money he’s losing on his ads, Jimmy quite literally “slipped” into his Slippin’ Jimmy ways, by staging a ‘slip and fall’ con on the music shop owners, when they smell a rat and refuse to honour their agreement. And it worked, as Jimmy was soon lying on his back at home, strumming an expensive guitar they threw in as a sweetener to stop him taking them to court. Later, a similar con during Jimmy’s community service (scaring his supervisor with an expensive court battle, if he refuses to let a drug dealer colleague go home to see his sick child), worked equally as well, with Jimmy pocketing $700 from the grateful dealer and an afternoon flat on his back. 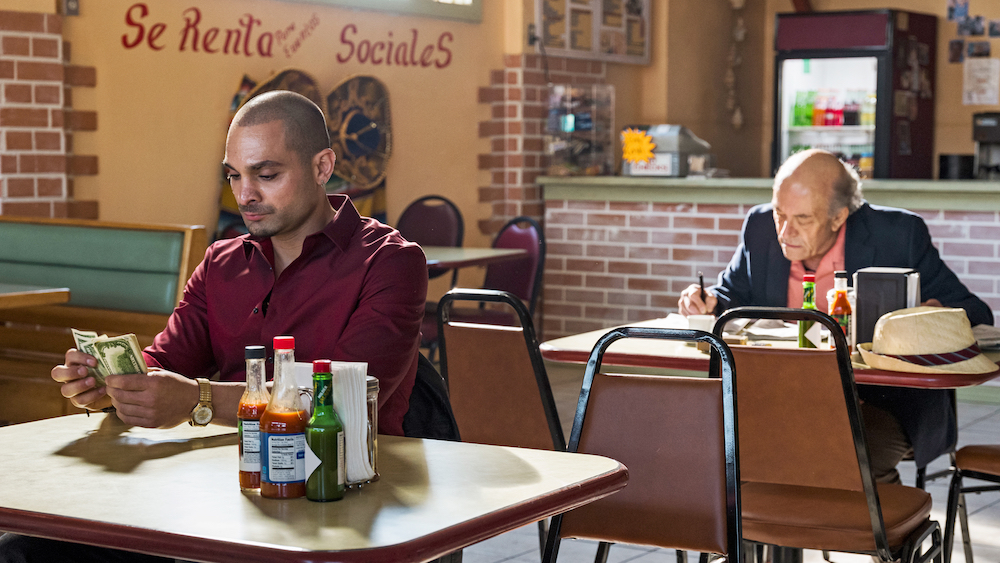 But while Jimmy’s getting wise to the idea that his conman past can be very helpful when applied to his lawyer present, brother Chuck is also changing. After contacting Dr. Cruz (Clea DuVall) and discussing his improvement with his electromagnetic hypersensitivity, Chuck’s clearly taking some big and important steps to getting his life and career back on-track. He’s able to walk around in daylight a little easier, forces himself to walk around a supermarket, and even manages it down the freezer aisle to pick up some soy milk. But while Chuck’s slow return to health is to be celebrated, it seems Jimmy’s plan to twist the knife in his brother be leaking information about his ill-health to his insurers has taken shape. Howard (Patrick Fabian) arrived to deliver the bad news, which we know will mean Chuck’s going to find it difficult, if not impossible, to become a practicing lawyer again if he can’t get reasonable malpractice insurance. 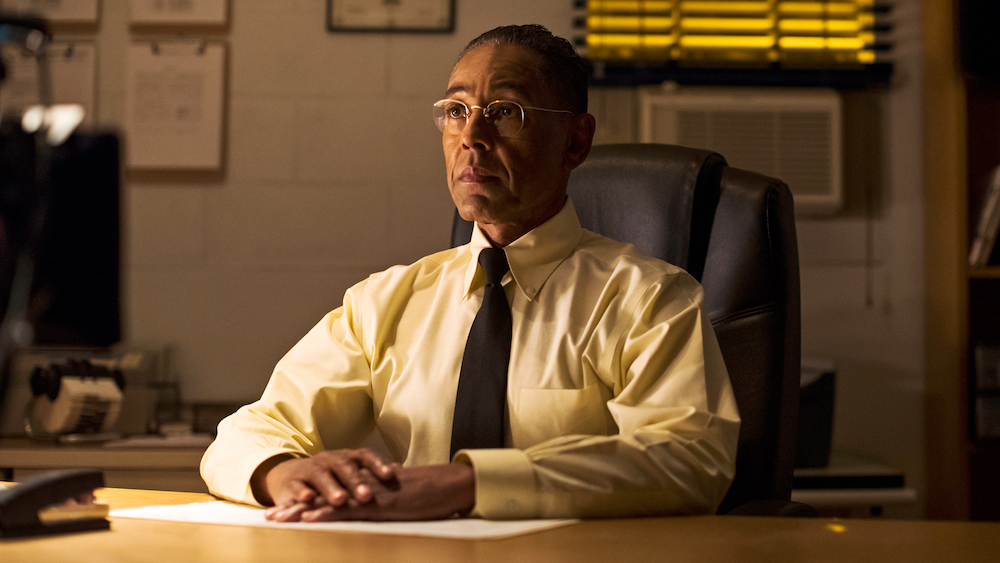 The other big storyline this week, and certainly the most conventionally dramatic, was seeing Nacho (Michael Mando) put his plan to kill Hector Salamanca (Mark Margolis) into effect, by exchanging his heart medication for pills containing nothing but ibuprofen. In typical Better Call Saul fashion, the episode took its time over these scenes, with a sequence where Nacho performed the pill replacement under a magnifying glass, then practiced making the switch with an empty chair and a jacket, before the real switcheroo took place in the restaurant where Nacho collects their street dealer’s takings. And it was a masterful moment, with Nacho having sabotaged the air-con to ensure Hector took his jacket off, then pretending to spot a fake dollar in the takings to steal Hector’s pot of pills, before dropping some money to make the switch. I especially enjoyed the shot where Nacho was fumbling with two pots of identical looking pills, trying to exchange them in the pot without arousing suspicion. Considering it all went to plan, I’m intrigued about what happens next, because it seems unlikely Hector’s going to crippled (as we know he’ll become from Breaking Bad) by Nacho’s plot… but how he survives, and who he blames, is yet to be seen.

In less prominent, but no less interesting subplots, Mike (Jonathan Banks) spent some time locating a dead body in the desert with a metal detector. Loved the overhead shot of Mike meticulously combing a large area of the desert for hours, too. After finding the corpse, which I’m guessing it’s the guy who helped the truck driver Mike robbed in season 2, he reports the discovery anonymously to the police. The idea, one presumes, is to basically get the cops on the trail of Hector Salamanca somehow. Later on, Mike also goes to Gus Fring (Giancarlo Esposito) about helping him launder the $200,000 he stole from Hector, so he can give it to his family without any concerns, and the two strike a deal. So this appears to be how Mike will end up doing jobs for Gus, in exchange for the laundering, which makes a lot of sense. He’s never been a bad guy, so to become an accomplice of Gus Fring’s needed a believable motivation like this.