Beleaguered 20th Century Fox, now a subsidiary of The Walt Disney Studios, finally has something to be proud of in 2019. After a year marked by box office bombs and projects going over-budget, Fox has found a diamond in the rough; a movie set to be both a commercial success and critical darling: Ford v Ferrari, also known as Le Mans ’66 in some territories.

James Mangold’s (Logan) Le Mans ’66 isn’t really about the historic and gruelling 24-hour race. It’s not about even automobiles or two iconic motoring companies. What Le Mans ’66 is about is something more primal. Something everyone can relate to. It’s about finding your purpose and passion in life. Like so many classics over the years, its themes are so central to the human experiences that it’s nearly impossible to watch this movie and not feel something. 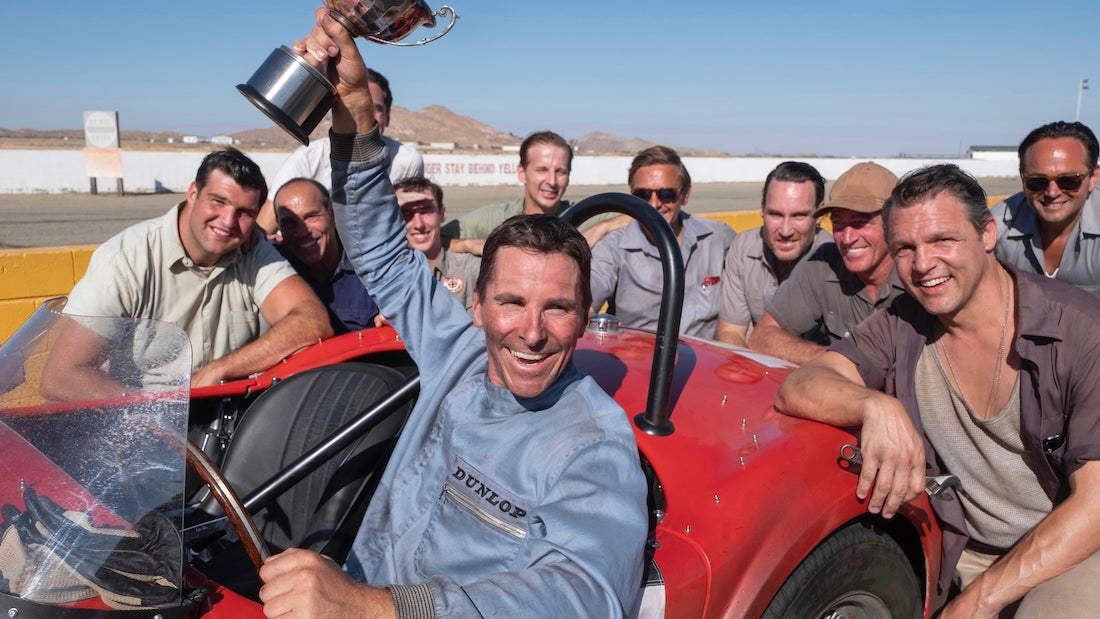 A lot of the credit for that falls to Mangold, who continues to strike human chords in movies that might otherwise be sanitised of humanity (a film about an ageing superhero? An ode to an American country music icon?) It may take an Academy Award or two for more people to appreciate how Mangold has become a master of his craft. But for now, everyone should flock to see a film that will undoubtedly and deservedly make a lot of 2019’s Top 10 lists.

At the heart of this story is two racecar drivers: one past his prime, Carroll Shelby (Matt Damon), and one who never found his peak, Ken Miles (Christian Bale). For different reasons both find themselves on the outside of the winners’ circle—with Shelby’s racing career aborted just as he reached the pinnacle, and Miles finding himself perpetually on the outside due to his chronic inability to get along with anyone. Both men tolerate each other in a shaky professional arrangement early on, but soon realise they need each other when a unique opportunity comes their way… 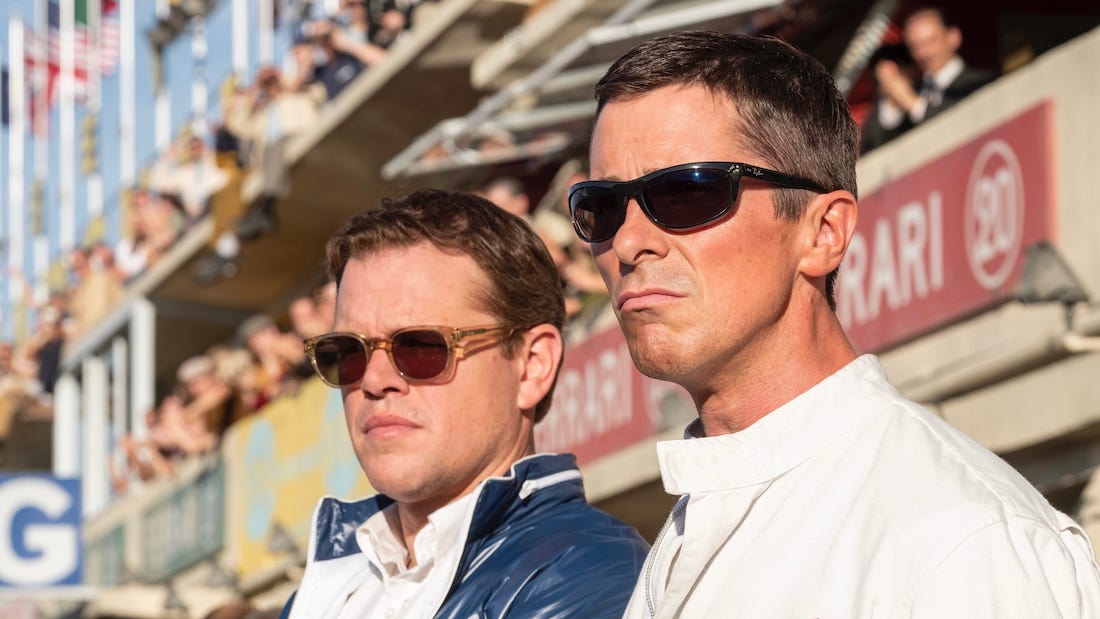 In the mid-20th-century, the Ford Motor Company was the dominant auto producer in America. But the glory years of pioneer Henry Ford were fading as his grandson Henry Ford II, a.k.a “the Deuce” (Tracy Letts), took control of the manufacturer. By the mid-1960s, Ford no longer made vehicles young people wanted to buy. Ford’s aren’t “sexy” as their Chief of Marketing, Lee Iacocca (Jon Bernthal), succinctly puts it.

A plan is duly hatched to buy the legendary Italian luxury sports car company Ferrari, who are said to be failing as a business. Iacocca believes that by combining the Ferrari brand with that of Ford, they can dominate the emerging sports coupe market in the US. But Iacocca and his associates are given a lesson in cutthroat dealings to rival a scene from The Godfather (1972), and the young American executive goes home both ashamed and emptyhanded.

Upon returning to Detroit and relaying the news of his failures (and a personal insult thrown by Ferrari himself at The Deuce), the desperate American executives hatch a wild scheme: Ford will build a racecar that can win Le Mans. A victory would not only give the Ford brand a shot of respectability with sportscar enthusiasts, but it would also be a slap in the face to Enzo Ferrari. And the only thing more important to Mr Ferrari than his hand-built luxury autos is professional racing.

While they largely loom in the background of the film, both Ford and Ferrari demonstrate they are men who respect legacy, fear failure, and live by their egos. 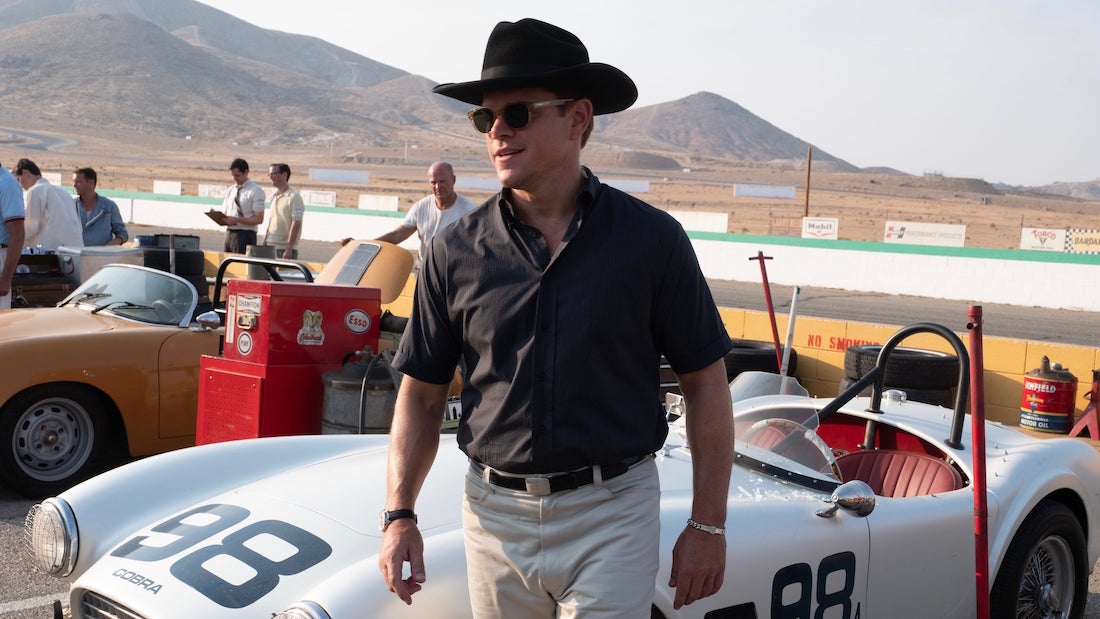 For those uninitiated in the global motorsports scene (I count myself among this group), Le Mans is a marathon race that’s as much about endurance as it is speed. The winner is determined not by who finishes first (as is the case in nearly every other race) but which car travels the greatest distance over a 24-hour period. In many years, racers will drive more than 6,000km by the time the race is over.

To win Le Mans, Iacocca tracks down the last American to claim victory (albeit in a British Aston Martin): Carroll Shelby. Iacocca presents Shelby with the challenge and Shelby sees it as an opportunity for him to get back into big-leagues. To make Ford a winner, he puts together a team that includes his key men at Shelby Automotive, his performance racing company. But as Shelby repeats several times for the benefit of the executives at Ford and us, the audience, winning the ’24 Hours of Le Mans’ isn’t just about the car… it’s about the driver.

That driver is Ken Miles, a British war vet struggling to make ends meets for his young family. Miles is talented as both a mechanic and a driver, but his volatile personality and tendency to say exactly what’s on his mind makes him difficult to work with. 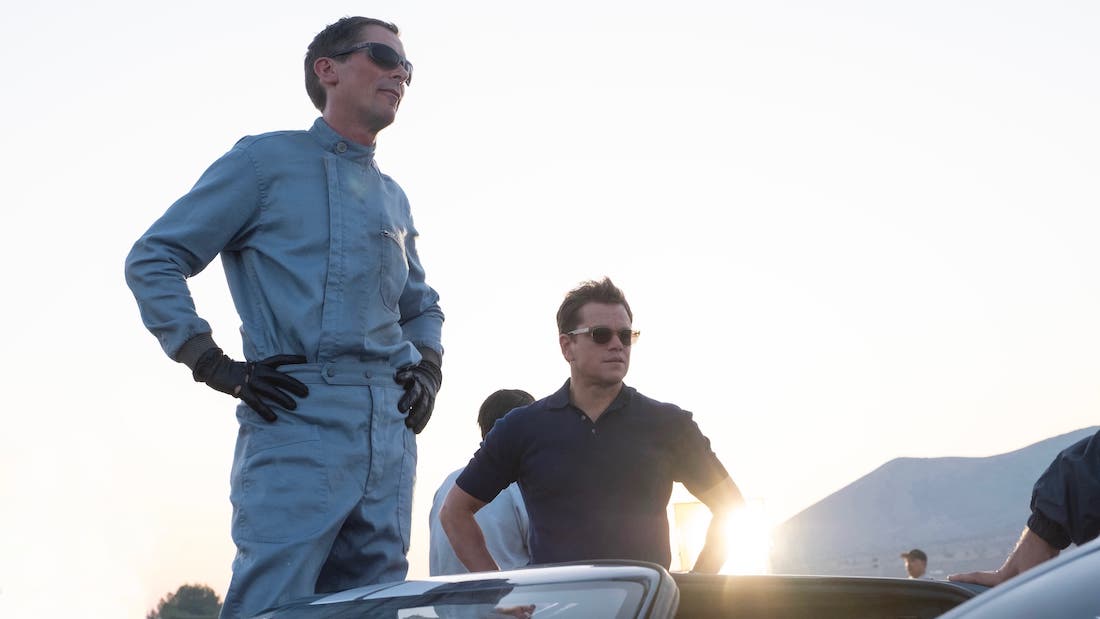 Shelby and Miles are better defined by their faults than their strengths. It’s their flaws and personal demons that make each character so relatable. Damon and Bale deliver outstanding performances, with Bale again leaving audiences with the sense he could be collecting another golden statute early next year. Although his character’s often incorrigible around his fellow racers and other men in general, his interactions with his son and wife (Outlander’s Caitriona Balfe) give Bale the opportunity to show Miles’s softer side.

And while the term “chemistry” is often tossed around when describing the performances of two actors portraying a romantic relationship, there’s plenty of chemistry on display with Bale and Damon. The two veterans convincingly portray a mutual respect that grows to a platonic, if unspoken, love between the two men.

As all of this takes place around the roar of muscle engines and race cars, fueled as much by testosterone as petrol, Le Mans ’66 is unexpectedly a love story. A love of racing fast cars. More importantly, it’s about the love shared by two people who find their destinies tangled at an intersection where their shared passions collide, and personal dreams are belatedly realised. It’s a place sweeter than any finish line. Its why Mangold hasn’t just delivered a great racing film… Le Mans ’66 is one of the best films of the year. 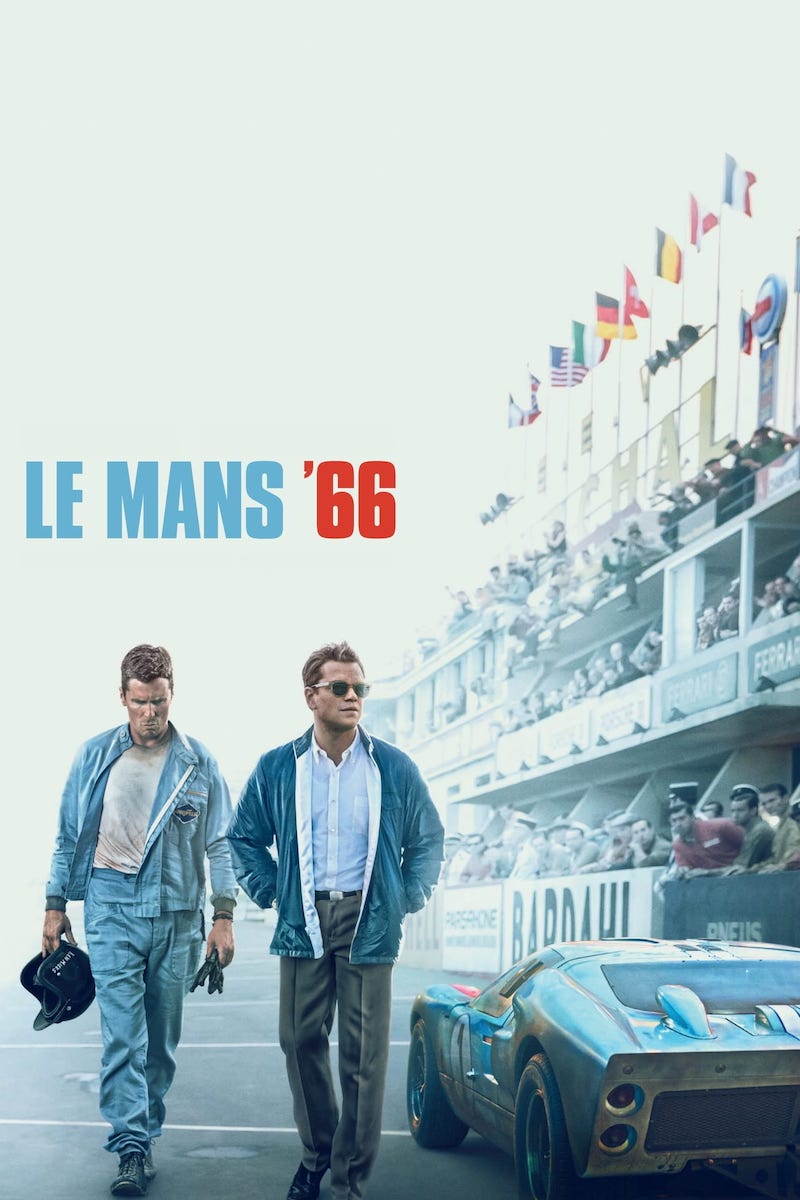