Invisible aliens in a tiny flying saucer come to Earth looking for heroin, landing on top of a New York apartment inhabited by a drug dealer and her androgynous, bisexual, nymphomaniac, fashion model lover...

For art punks and punk artists alike in the early 1980s, there was no better place to settle down than the emerging mecca of the post-punk underground: downtown Manhattan. With Debbie Harry, Cookie Mueller, Jean-Michel Basquiat, and Andy Warhol restlessly circling the same scene, it was a who’s who of art school heartthrobs concentrated within a 15-block radius. It’s all the more unlikely, then, that the person to create the most cohesive cinematic document of this moment in time would not be a young artist immersed in the downtown art scene, but rather a middle-aged Russian émigré called Slava Tsukerman.

It’s no surprise that his sci-fi/New Wave fantasia, Liquid Sky (1982), is more than a little sympathetic to the invisible opioid-seeking aliens at the centre of its narrative. Tsukerman was himself an alien in the city, having gone from the Soviet Union to the Mudd Club in the span of only a few years. The aliens aren’t the protagonists—that honour belongs to the androgynous model and nightclubber Margaret (co-writer Anne Carlisle), who finds out aliens are killing heroin-dependent models, including those she sleeps with. 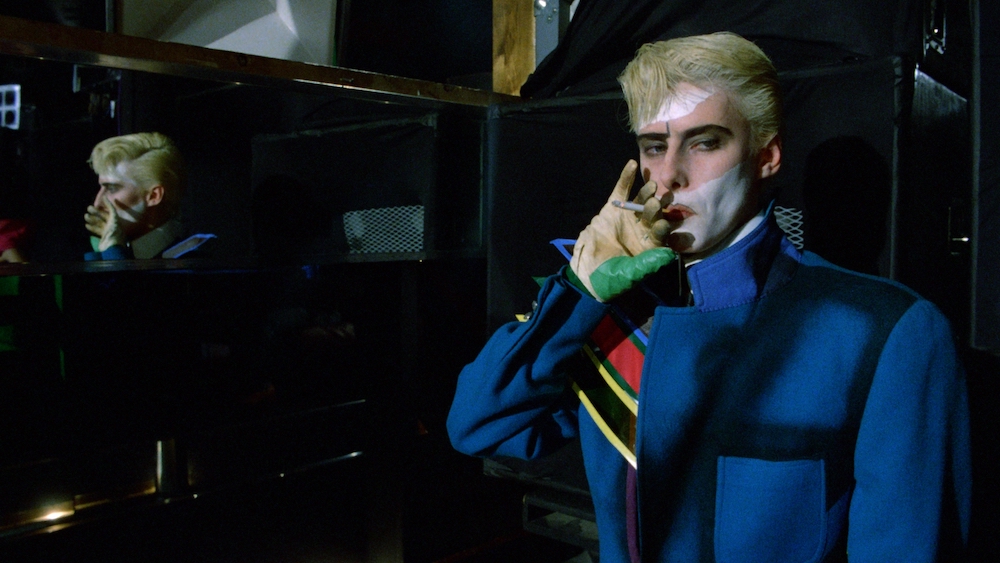 These unseen aliens, dependent on the chemicals that both heroin and orgasms produce in the human brain, land in the veritable sex and heroin capital of the country: Margaret’s penthouse. A place she shares with the club scene’s premiere drug dealer Adrian (Paula E. Sheppard). As Margaret has casual sex in her apartment and her partners are picked off off one-by-one by the aliens, she begins to use this “power” to get even with the world. In other words, she begins to kill every creepy man in a one-mile radius with murder-via-sex. All the while, across the street a German professor named Johann (Otto von Wernherr) is patiently observing the alien UFO through binoculars and watching in horror as men, like lambs to the slaughter, enter Margaret’s penthouse and never come out. 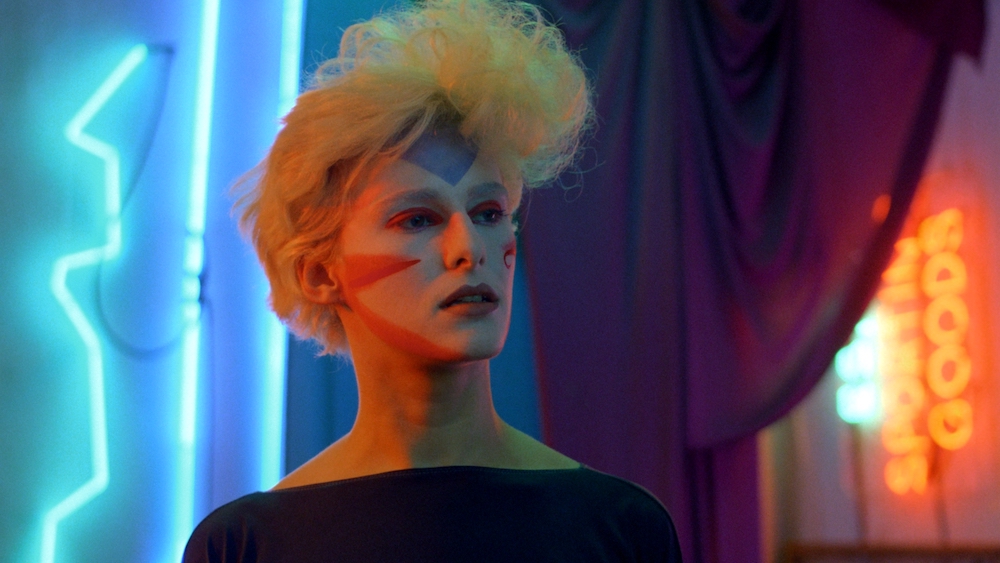 Although Margaret and her internal struggle are the focus of the film, we’re shown the city not so much through her eyes but rather through the eyes of an outsider. Every club scene, soundtracked by a nightmarish synth score by Tsukerman himself, looks at once uniquely of the ‘80s and eerily futuristic. It’s less Manhattan, more a different planet altogether. The film’s appeal is so timeless because the whole thing seems to exist independent of time altogether, like a parallel universe in which that early ‘80s downtown scene expanded to consume mainstream culture and there’s an ominous, unending nighttime in the city.

The dreaminess of its nocturnal, almost-futuristic setting extends to other aspects of the movie; Carlisle plays not only Margaret but also her male counterpart Jimmy, a pretentious rival model fuelled by cocaine and a massive ego. The two characters often play off each other in the same scene, the camera cutting back and forth between two versions of Anne Carlisle to gleefully disorienting effect. Androgyny, especially in fashion, is a big part of the film, and its reflected in the omnipresence of mirrors and reflective surfaces whenever Margaret and Jimmy cross paths. Every wall in Margaret’s penthouse is covered in mirrors and neon lights, and when the two models confront each other there late in the film it’s like they’re suspended in some mystical fluorescent void, reflections abound. 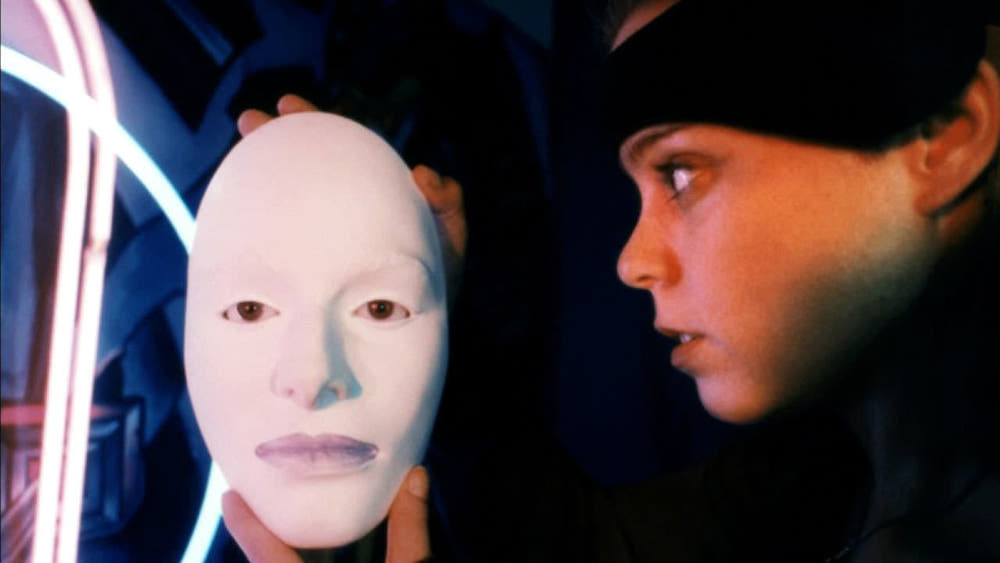 You’d be forgiven for thinking this is a campy, anything-goes B Movie given the lurid plot, but Tsukerman executes it as anything but. Liquid Sky is, against all odds, an art film through and through; one infused with the fury and passion of punk rock and the ingenuity required from a $500,000 budget. That money is the last thing on one’s mind while watching though; the movie looks like the most hypnotic, synth-heavy DayGlo daydream imaginable. It’s like if Tron (1982), Repo Man (1984), and Blade Runner (1982) all had an impossibly beautiful, neon-lit movie baby. Beautiful people with glow-in-the-dark face paint, peroxide blonde hair and angular New Wave outfits strut around as if they’re in a hip fashion show from another dimension. All these strange, retro-futuristic characters are cast in gorgeous, dramatic lighting fit for a Caravaggio painting… if Caravaggio had been around in early-‘80s Manhattan and listened to nothing but Depeche Mode. Needless to say, the movie is stunning to watch, one that is in many ways just as compelling as a purely audiovisual experience as it is a narrative one.

It’s a parade of style-over-substance brilliance, a relatively simple but compelling plot roping the viewer along on this journey of strange and mesmerising sights and sounds that feels ahead of its time even today. Its continued relevance—and absolutely ferocious hipness—today is largely thanks to the fact that it avoids the all-to-common ‘80s film pitfall of being noticeably of-its-time and dated. How could it be dated when it was so progressive and challenging in its ideas of sex, gender, and fashion even upon its release? This is a film that could be unveiled in theatres today and still turn heads with its gender-bending casting, forward-thinking fashion and nuanced take on sexuality. 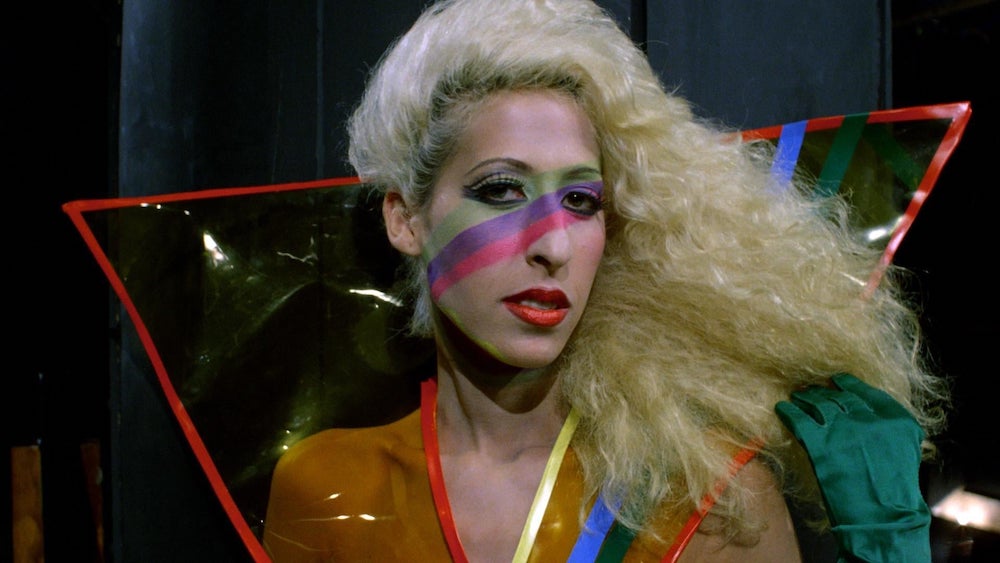 Of course, it’s also ahead of its time for a more concrete reason: it can be read as a thinly veiled commentary on the spread of AIDS, years before the crisis had entered the national conversation. Its characters—aliens included—are fixated on the relationship between sex, needles, and death (specifically the idea of casual sex and heroin abuse killing young people in the city). The first cases of AIDS in New York City had emerged just a year prior to filming, and thus it wasn’t yet perceived as the full-scale international epidemic it would become. Liquid Sky, as small in budget and reach as it may have been, was more than likely the first film to allude to the disease in any way—even by accident.

Tsukerman insists the parallels to the impending AIDS crisis were a bizarre coincidence he didn’t intend, and neither he nor Anne Carlisle knew anyone who contracted the disease until after the film’s release in 1982. Intentional or otherwise, because of its historical context it’s difficult not to view it as an essential cinematic document of AIDS-era New York.

If you’ll excuse the pun, there’s something enticingly alien about Liquid Sky that makes it unlike any other film of its time. It captures the nervous energy and punk spirit of the era while also making it seem unfamiliar and otherworldly, reimagining downtown Manhattan as an underground world in which clubs never close and daylight never arrives. It’s a definitive cult film, but its appeal extends well beyond the exclusive fanbase that label suggests—this is an essential New York film, punk film, AIDS film, and, above all, an essential film. One with an unparalleled originality and stylistic boldness. When it’s all boiled down, the movie’s worldview and appeal can be neatly summed up in a short, characteristically caustic quote from Margaret’s climactic monologue: “they call me beautiful, and I kill with my cunt. Isn’t it fashionable?”