Something I never thought I’d say: Jessica Jones is becoming too ‘Marvel’. In “AKA Ain’t We Got Fun”, we see what happens when a series knows for its scathing portrayal of ‘superheroes in the real world’ turns on that, with every character somehow interacting with another powered-person in the course of a single episode.

Jessica (Krysten Ritter) is with her mother, Alisa (Janet McTeer), who’s showcasing clear Hulk-like uncontrollable anger issues, only without the physical transformation. Trish (Rachael Taylor) and Malcolm (Eka Darville) are now both dealing with the over-powered effects of what was essentially introduced as a watered-down super-soldier serum. Jeri (Carrie-Anne Moss), on the other hand, finds the mysterious healer Inez (Leah Gibson) was talking about. 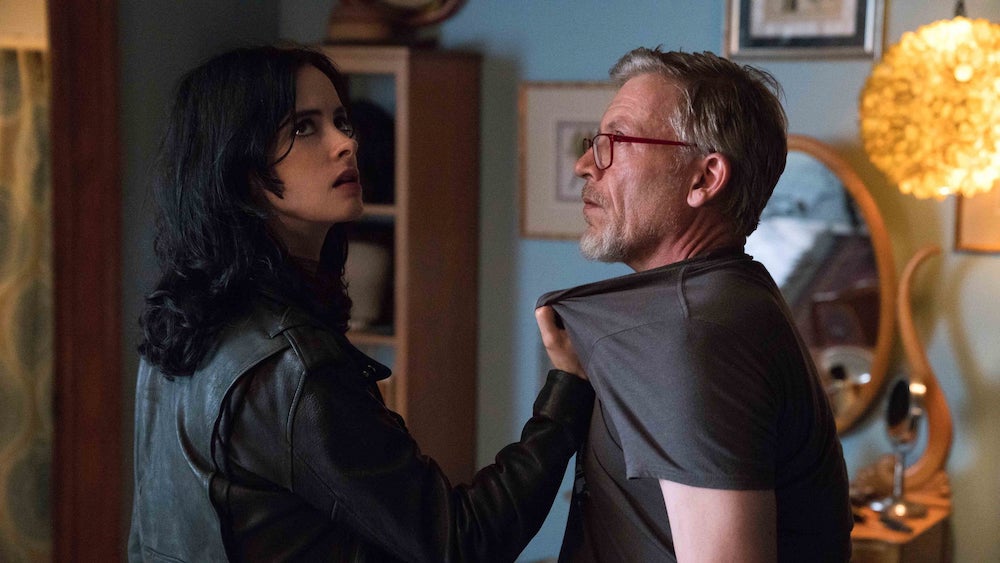 It’s all too cleanly pieced together, you know what I mean? Everyone finds a super-friend to solve their problems! And come on, we haven’t even gotten to Kilgrave (David Tennant) yet! Just like “AKA Facetime”, “AKA Ain’t We Got Fun” went one step too far, making me roll my eyes even before the big twist arrives.

What salvages this episode is the chemistry between the actors, particularly since Jessica and Alisa, who spend the hour together working through some mother-daughter issues. After Karl (Callum Keith Rennie) tries unsuccessfully to convince Jessica to talk calmly to her mother, Karl runs off and leaves Alisa and Jessica locked in the room, but not before declaring his mutual love for Jessica’s mother.

After a timely talk about men’s manipulation of women, we see Jessica at her most vulnerable, as her emotions swing between anger at being lied to, longing for her mother and a family, fear of her mother’s anger, and confusion over what to do next. She almost gives Alisa up to the police, before deciding to take her along when she escapes from the locked room. 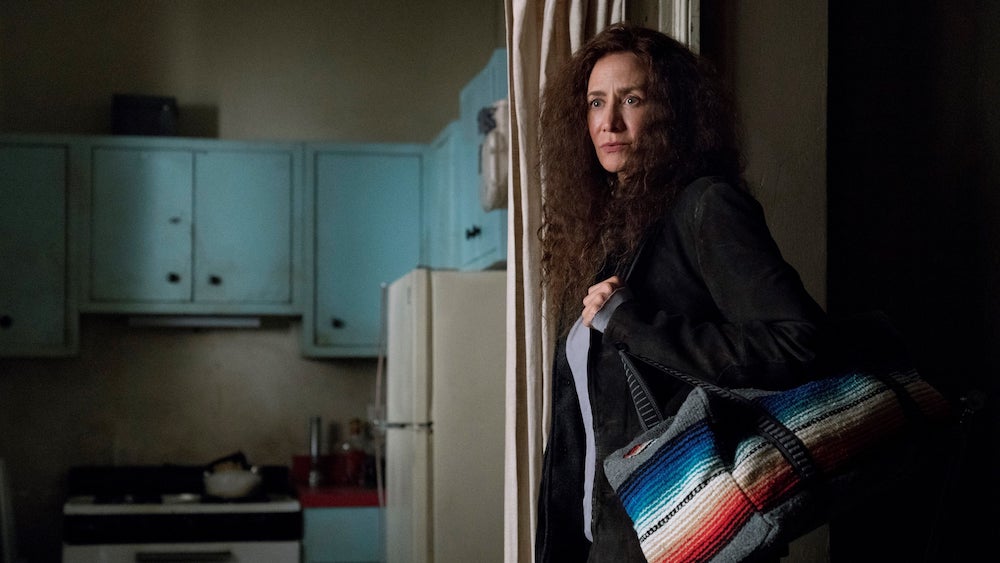 From there, it’s an episode of conflicting scenarios, as we see Alisa humming happily in the kitchen, making jokes at “Jessie’s” expense, while also being a ‘rage monster’ whose moods can turn on a dime. From a character development standpoint, it pushes the eponymous character, the one who was an angsty teen when her family died, as she’s forced to now be the adult.

It also helps us to cut through Jessica’s usual devil may care attitude, as she has to explicitly tell Alisa not to talk to Oscar (J. R. Ramirez), for fear that Alisa might get angry at him later. This happens multiple times, as Jessica shows her concern for other people (and the city) when she keeps reminding Alisa that she needs to keep an eye on her to prevent mass murder. 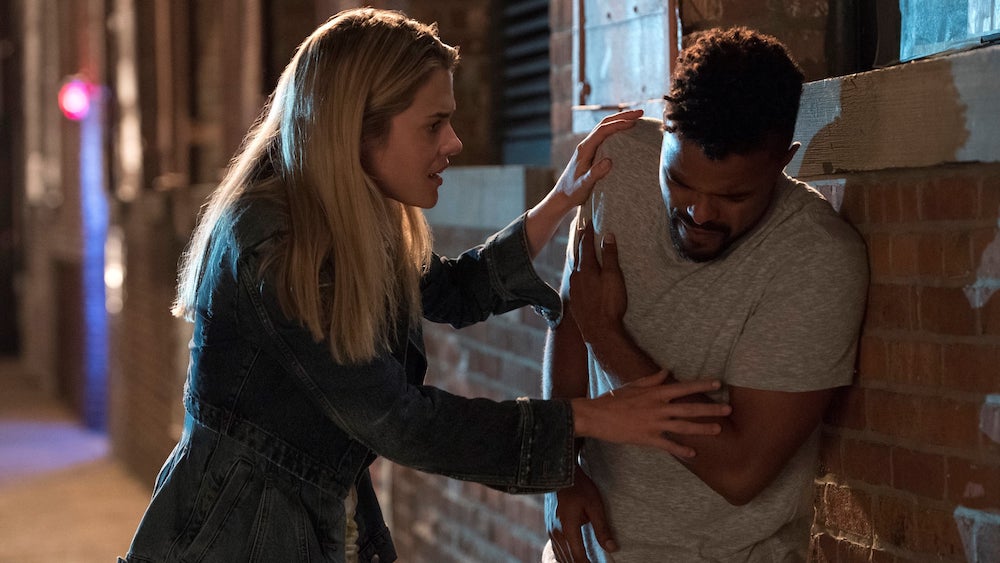 It doesn’t bode well then that “AKA Ain’t We Got Fun” ends with Jessica taking a bullet in the shoulder to protect her mom, and Alisa going full Hulk and running out of the building…

This main plot is supplemented with Malcolm rejecting Trish after finding out about the inhaler. If you think that Malcolm’s the most sober person here, that feeling doesn’t last, as he endures a beating while chasing Jeri’s partner Benowitz. When Trish saves him and convinces him to take a puff, we see him inhale, and then react like a crazed maniac, yelling at Trish to stay away and running off.

The only person who seems sane here is Detective Costa (John Ventimiglia), who goes to find Jessica after Alisa’s safe house turns out empty, and tells her that he put his job on the line for her. He’s so sane that even our own Jessica Jones promises to go down to the precinct the next morning, although I don’t think that’s going to happen now… 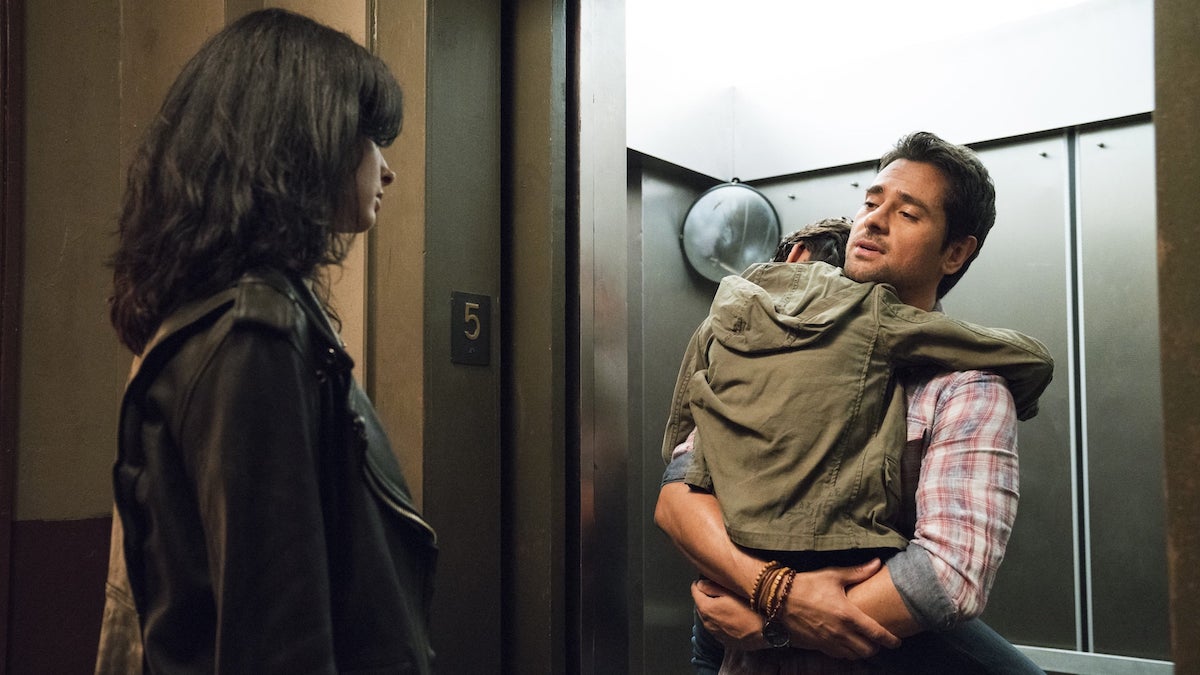 “AKA Shark in the Bathtub, Monster in the Bed”

If there’s a theme that seems to have come back with vengeance this season, it’s about the ability to control one’s self. In season 1, Kilgrave took that away from our protagonists; on the upside, it also gave them an external force to blame for their mistakes. In season 2, however, we’ve moved past this, and are now looking at a question that wouldn’t be as intriguing if it wasn’t for the previous set-up: what happens if our minds are now the ones making the bad decisions, and we’re uncontrollable because of it?

That’s a human problem, and it breaks up the Marvel-wrapped bow of “AKA Ain’t We Got Fun”. In “AKA Shark in the Bathtub, Monster in the Bed”, we move into the second half of a superhero origin story, where, to quote one of the cheesiest comic-book lines ever, “with great power comes great responsibility”. 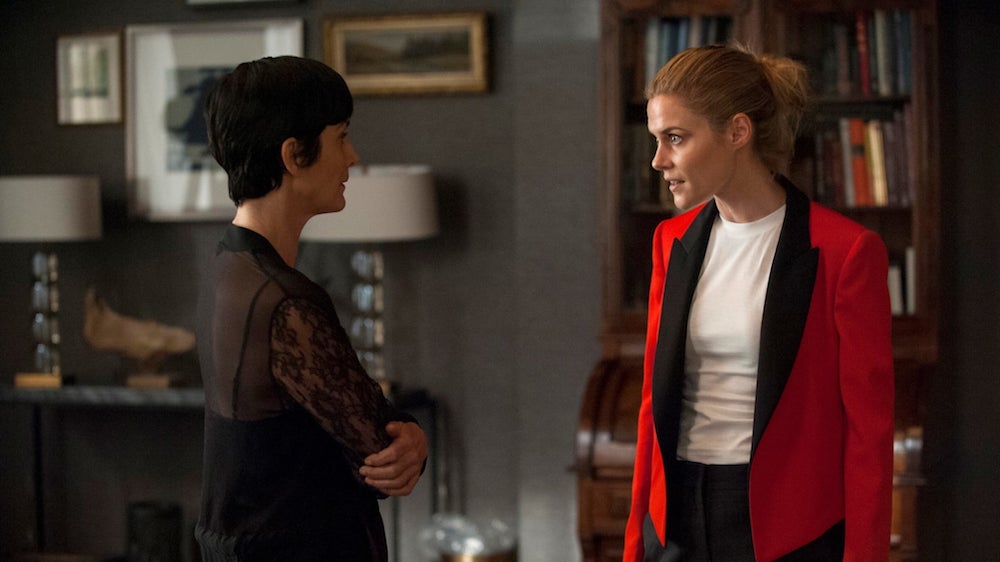 We find out that rival PI Pryce (Terry Chen) was the one who tried to assassinate Alisa. This provides us with a moment where Jessica, trying to prevent Alisa from killing him, has to decide whether to tranquillise her own mother or not. As someone who has vehemently objected to her mother being drugged, she decides to take the threat out, her way: she inserts the tranquilliser into Pryce’s neck instead.

That’s only a temporary neutralisation, of course, and after they bind him and put him in Jessica’s bathtub, we see the differences between Alisa and Jessica appear quickly. While Jessica wants to keep her low profile and threaten Pryce with legal action — she did get shot, after all! — to get him to stay silent, while Alisa wants to just snap the guy’s neck and be done with it. Alternatively, Alisa suggests, they can just run away, meet with Karl and try to be a family again.

Jessica’s spent enough time in the real world, though, so she rejects that option (half-heartedly, because who hasn’t wanted to run away?), and tries to find another option for her mother that isn’t ‘The Raft’ — the underwater prison for powered people. 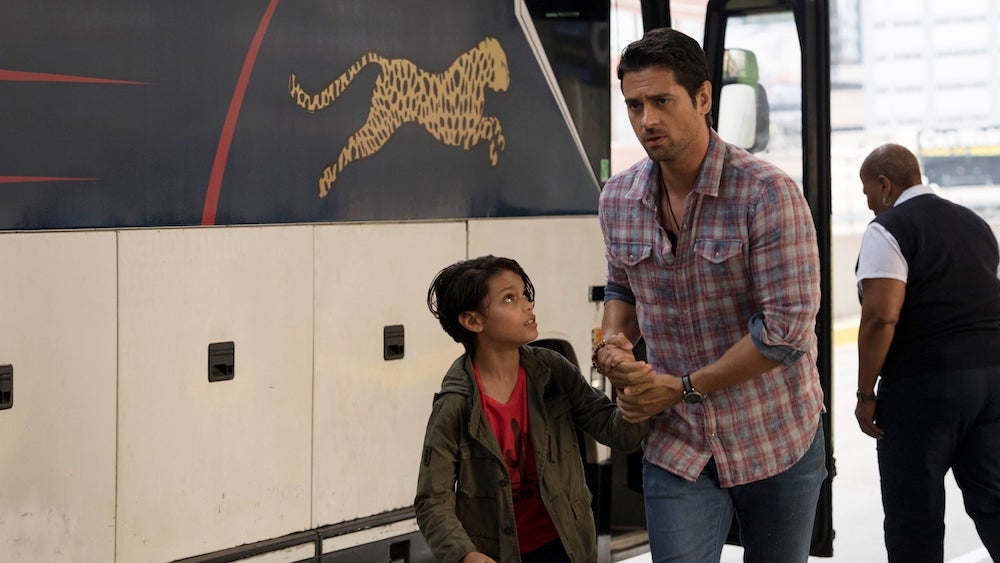 As she watches Alisa deal with her night terrors, Jessica ponders “is this how I get my mom?” Alisa apparently always dreams “about losing you, over and over again”, only calming down when Jessica, fully embracing her daughter role, keeps telling her mom that it’s all fine, she’s here now.

Cue to the can-villains-do-good-things moment of the season, when Oscar asks for their help getting Vido (Kevin Chacon) back from his ex. Jessica and Alisa, with their combined strength, stop a bus, helping Oscar get Vido back. Alisa is hyped up about the prospect of being a superhero, but Jessica knows that it’s not a good idea.

Oscar, too, seeing Alisa’s powers and worried about Jessica’s gunshot wound, offers to help in any way he can. They then hold hands for a sweet second, giving us hope, in another show, that we might be seeing the new couple of the season. In Jessica Jones, though, we just worry about his imminent death… or betrayal. 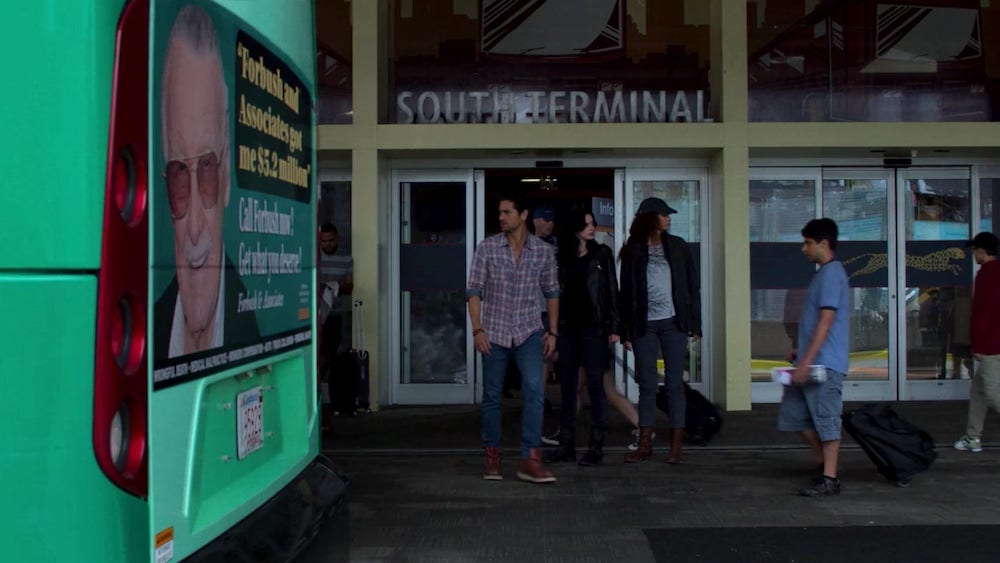 As Pryce continues to be knocked out, we see Trish run in, high on the inhaler, and question Jessica over her refusal to continue the investigation. Trish’s bloodlust manifests in extreme anger, so when Jessica finally realises that she’s on something, Trish denies it and runs out, leaving Jessica in regret-mode.

When Jeri, now romantically-entangled with Inez, protects her from Trish as well, Trish, fully addicted to the anger, has a full meltdown on radio over people who don’t take action against injustice.

Right as you’re wondering “but doesn’t a inhaler run out?”, the inhaler clicks empty, and we see Trish’s face fall, ruining the high just as she secures an interview with her dream network because of her passionate rant. Will Trish just crash like an addict, or tear down the city to find another high? We’ll find out, but I predict the former if Malolm, MIA for the whole episode, finally reappears.

When Pryce wakes up, he’s seemingly sympathetic to Jessica’s plight, and agrees to avoid the police if Jessica doesn’t report him for the shooting. However, he’s unwilling to let Alisa off the hook, using the lives of police offers as an example of why “she needs to be stopped”. Jessica, after an episode of trying to keep Alisa controlled, knows this, and so takes Pryce’s advice and called Detective Costa, who sends a team of squad cars to her home.

Alisa gets mad, Pryce runs, Alisa almost kills Jessica (before stopping when the latter, bloodied and bruised, looks at her, and pleads “… mom”); in the end, with Jessica begging her, Alisa puts up her hands and gives herself up.

Jessica: “This is how I lose my mom.”