Most will agree the less-interesting adult segments of Stephen King’s It are its weakness, together with its extraordinary length. Few remember that the book received mixed reviews back in 1986, as so much of its legacy in the public imagination stems from the 1990 TV miniseries and Tim Curry’s performance as Pennywise the evil clown. Andy Muschietti’s adaptation of It (2017) was a critical and commercial phenomenon, grossing $700M worldwide, but everyone knew It Chapter Two would be the true test for any adaptation of King’s novel. Like the miniseries, Muschietti has bisected the story (one half focused on the kids, the other on the adults), and everyone’s wondering if his version will overcome the inherent problems of a coming-of-age spooky horror transitioning into a tale of middle-aged malaise and repressed memory.

It Chapter Two picks things up 27 years later. After The Losers Club defeated child-killing Pennywise (Bill Skarsgård), a shape-shifting creature that hides in the sewers of Derry, Maine, most have moved away and grown-up. Bill (James McAvoy) is a successful author who can’t write good endings, which is both a meta-joke about King himself and a nod to how Bill realises there’s unfinished business back in his hometown. Beverly (Jessica Chastain) is a successful Chicago fashion designer, but she’s swapped an abusing father for an abusing husband. Ben (Jay Ryan) has become a successful architect in Nebraska, even transforming his own overweight physique into something healthier. Richie (Bill Hader) has become a successful comedian but suffers from crippling anxiety that stems from his childhood experience. Eddie (James Ransone) has become a successful risk assessor in New York City, but his life’s blighted by his uncontrolled hypochondria. Stanley (Andy Bean) has become an accountant in Atlanta but remains scared of the world around him. And, finally, Mike (Isaiah Mustafa) is the only Loser to have remained in Derry all these years, becoming obsessed with the town’s cycle of unexplained murders and determined to stop Pennywise once and for all now he’s resurfaced in 2016. But he’s also battling a substance abuse problem. 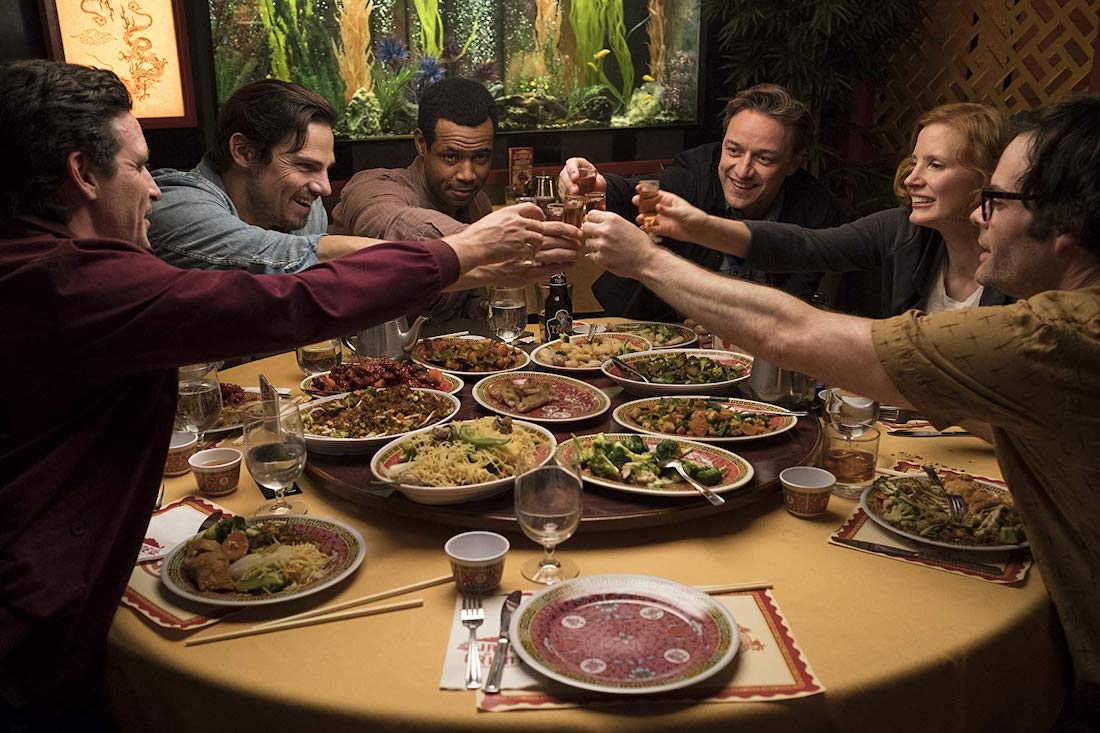 The adult Losers are successes in some respects but are psychologically traumatised and unable to find inner peace. It Chapter Two is about adults getting closure on their childhood, going back to their hometowns and reliving old times, to work through their problems and rediscover themselves and their various strengths. The three decades away from Derry has given everyone light amnesia, with only Mike able to remember their experience fighting Pennywise in 1989, but now they’re all drawn back when their friend reaches out to them and gradually recall what happened when they were kids.

Incidentally, one odd thing about Chapter Two is that Mike becomes the self-styled historian and expert on all things Derry, and there’s no mention of the fact Ben fulfilled that role in the first part. Did he just lose all interest in Derry’s weird history when he moves away and became an architect? And why isn’t that interest reawakened in this sequel by Mike’s research?

The fundamental approach to this sequel’s storytelling is both a strength and a weakness. I love the idea of the Losers having grown up into unhappy people, tormented by horrors they can’t quite remember, who have to go back and end what they started by honouring a blood pact they made. It gives the story its sense of epic scope and a way to make the sequel different to what came before. The problem has always been that the hook of seven unpopular kids banding together to kill a shapeshifting clown, whether in the 1950s/’60s (like the novel and miniseries) or the 1980s (like the first movie), is more appealing and exciting than seeing adults face-off against a supernatural boogieman. The miniseries practically drove itself off a cliff when the second part had to focus on the adults, and Muschietti has to deal with the exact same problem. 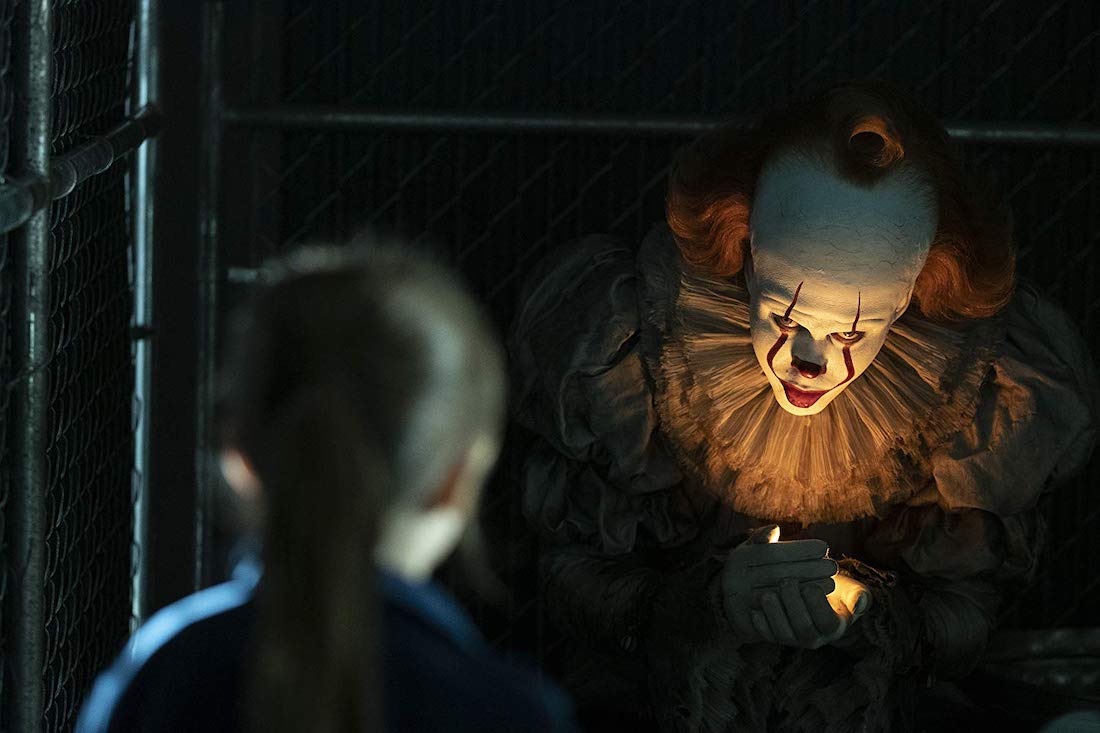 The solution, as written by Gary Dauberman (Annabelle Comes Home), is to tell the story much like the novel with its alternating time periods. This means that once the adults arrive back in Derry they split up to gather personal artefacts (redolent of Harry Potter’s Horcruxes) to use in a Native American ritual to destroy “It”, and we get a half-dozen side-adventures that allow each adult’s story to flashback to a hitherto unmentioned experience they had in ’89. So if you enjoyed the first It, this sequel gives you lots of “deleted scenes” with the original child cast.

Some of those work very well and it’s great to see those kids again (particularly the very talented Sophia Lillis as Beverly), even if a few have been digitally airbrushed to offset their growth spurts. I particularly enjoyed a scene with the Losers in an underground clubhouse, which kept switching back to the present time with them exploring its abandoned shell. The movie is full of such instances when the past echoes into the future, which certainly speaks to me as a 40-year-old prone to reminisce about my childhood.

There’s certainly lots to enjoy about It Chapter Two, but it’s a little hamstrung by inflated expectations and a mistaken emphasis on set-pieces instead of character development. There are more instances of Pennywise appearing to scare people (in his clown form or a variety of other creepy guises) and only some of those moments deliver a true shock or shiver: one with Beverly and a weird old lady spoiled by a teaser trailer, another when the Losers reunite at a Chinese restaurant and open fortune cookies, and a wonderful sequence under bleachers where Pennywise lures a birthmarked girl with more cunning than his famous storm drain appearance. The others are enjoyable but largely amount to ghoulish things lunging at you loudly. The scares are more aggressive, perhaps because there’s a need to up the ante when adult characters need to be frightened by Pennywise’s antics, but it often comes across as OTT. There’s even an overt nod to the morphing alien in The Thing (1982) with a scuttling spider-head critter. 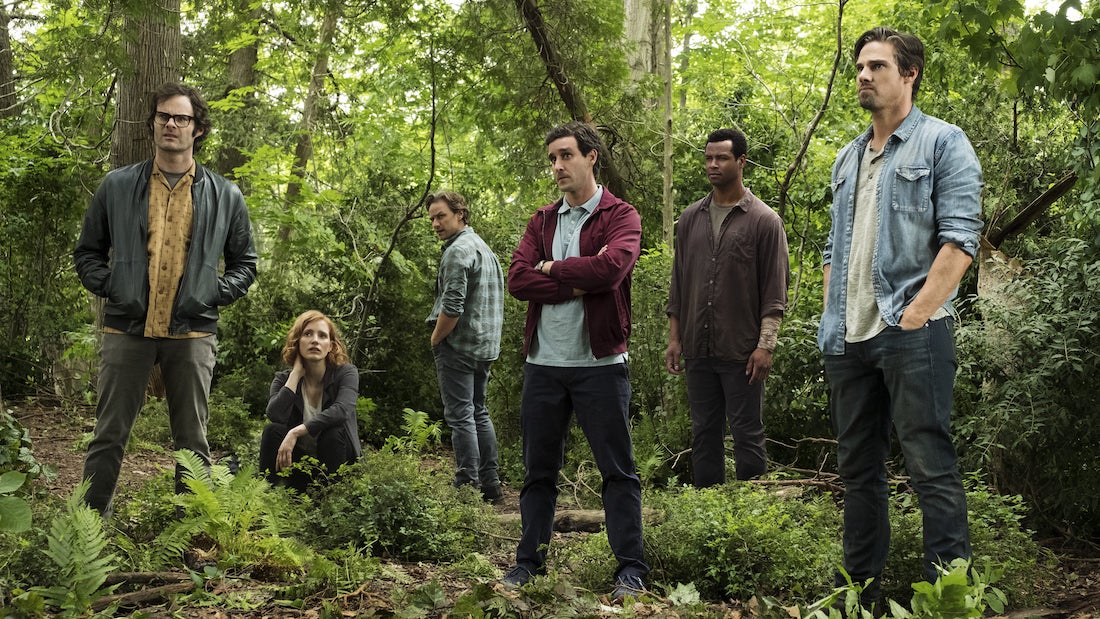 The crux of Chapter Two should’ve been the idea of these dysfunctional adults stepping back into their old lives, literally rediscovering the past and unlocking old memories. The Losers literally have to go underground, then further beneath the sewers into ancient caves, for a final confrontation with Pennywise (that’s faithful to the book but tweaked to avoid any silliness), but the story fumbles the arc of seeing adults achieve total recall and confront an enemy who’s festered in their psyches and crippled their adulthood.

It’s also strange that the movie opens with a less fantastical scare, involving a homophobic attack on two carnival-goers, which suggests the movie will approach things from a more rational perspective adults have on the true horrors in the world, but that doesn’t really go anywhere. I thought they might use Henry Bowers (Teach Grant), the now-adult bully of the Losers who’s spent his life in an asylum for murder, as a way to weave in more down-to-earth scares being fuelled by Pennywise’s influence… but Bowers’ role is slightly irrelevant and a letdown considering the possibilities. 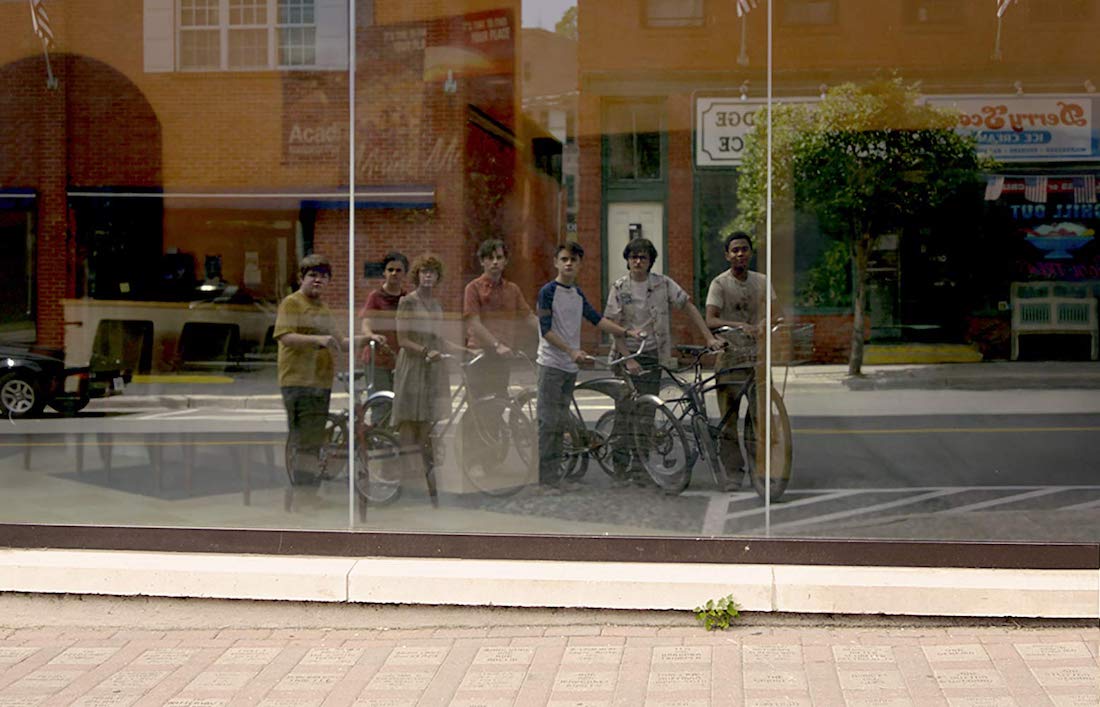 All of the performances are good, with Chastain and Hader the undoubted standouts. The latter gets most of the best lines and this role fits Hader like a glove—he’s a comedian who suffers from anxiety in real life, so it’s perhaps no surprise he’s so good. It’s just a shame the script gives Hader a sardonic remark as punctuation for almost every scare that happens in Richie’s presence, as it deflates the tension and undercuts any horror. Sometimes that’s worth doing to clear the air a little for audiences, no question, but Richie’s making funnies so often it works against whatever unnerving spell the movie’s conjured. Still, I was grateful for the small mercy that Richie’s witticisms are mostly funny and plausible things a real guy would say around their friends and not a screenwriter’s excruciating approximations of a comedian’s wit.

James McAvoy’s decent enough, but not enough is made about the fact Bill writes stories that aren’t a million miles away from what’s happening now. Bill is clearly an analogue for Stephen King himself (he often puts author characters into his own stories), and yet King is quoted as saying that horror authors don’t write horror because their own childhoods were horrific. But that’s exactly what seems to have happened with Bill here, and it was a shame more wasn’t made about his chosen profession. We just get a lot of jokes about the fact he can’t write good endings, which is a criticism often thrown at King (who gets a fun cameo here as a shopkeeper, it must be said). 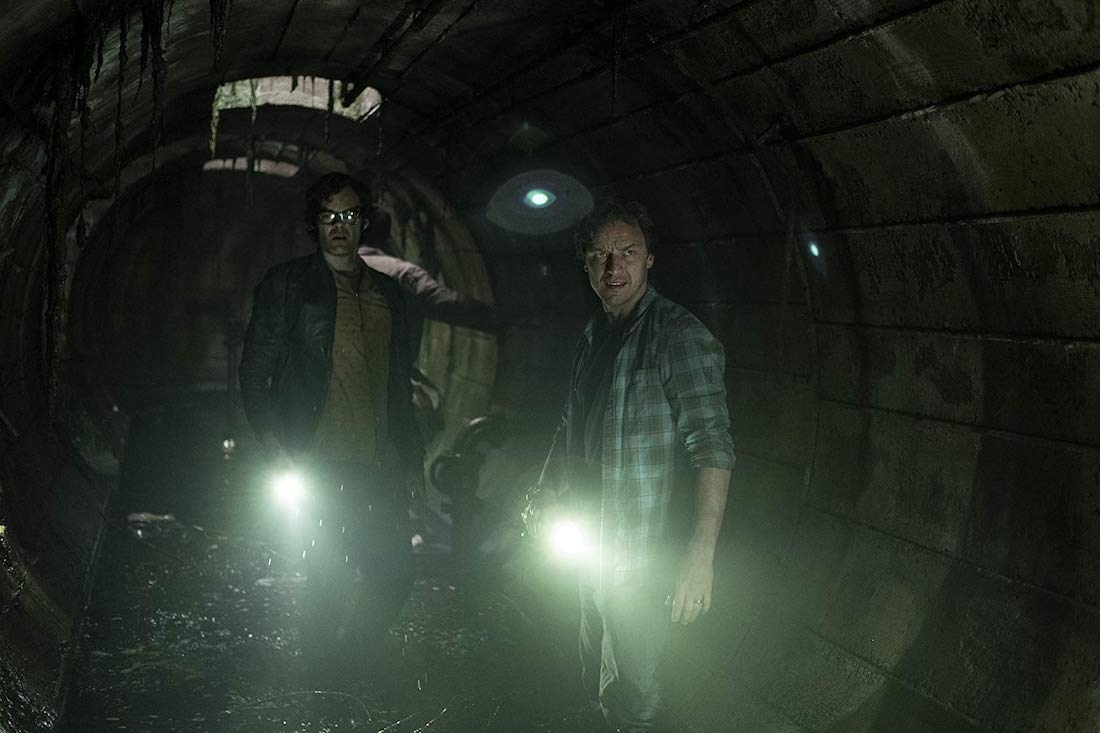 I loved It because that film was perfectly judged and calibrated, as both a compelling coming-of-age story about misfits who find strength through friendship, but also a spirited funhouse horror spectacle with a delicious performance by Bill Skarsgård as Pennywise. It Chapter Two is just as confident but not as slick, although I didn’t find its 169-minutes a chore to sit through as many others have. But an hour could’ve easily been cut from the runtime, as the story is mostly about six adults relearning stuff the audience already knows. And that’s a problem. The sense of discovery is mostly absent this time (beyond some of the ancient lore about Pennywise that Mike uncovers), and it remains true that a creepy clown works best as an antagonist for kids and not fortysomethings.

There’s already talk of a combined version of both films being released, but I think a shorter four-hour edit of both films (trimming the fat from Chapter Two and maybe restoring the alternating time-frame of the novel) might be the more interesting and definitive version.

As it stands, It Chapter Two has fewer iconic moments and stomach-pitting frights, but it eagerly wants to entertain and amps up the spookiness. Some of the set-pieces are excellent and I enjoyed the menace and otherworldliness of the tense finale, but Andy Muschietti doesn’t overcome the same big issues the miniseries stumbled over. But this is still a fun time with a satisfying conclusion, plus it’s great to have a horror epic that’s telling a rollicking good story. Too many modern horror movies are just conceptual setups for jump-scares and don’t have a rich narrative or likeable characters, so at least It stuck to its themes and had a blast with its slavering killer clown.

Just don’t expect to be floating on air with pleasure. 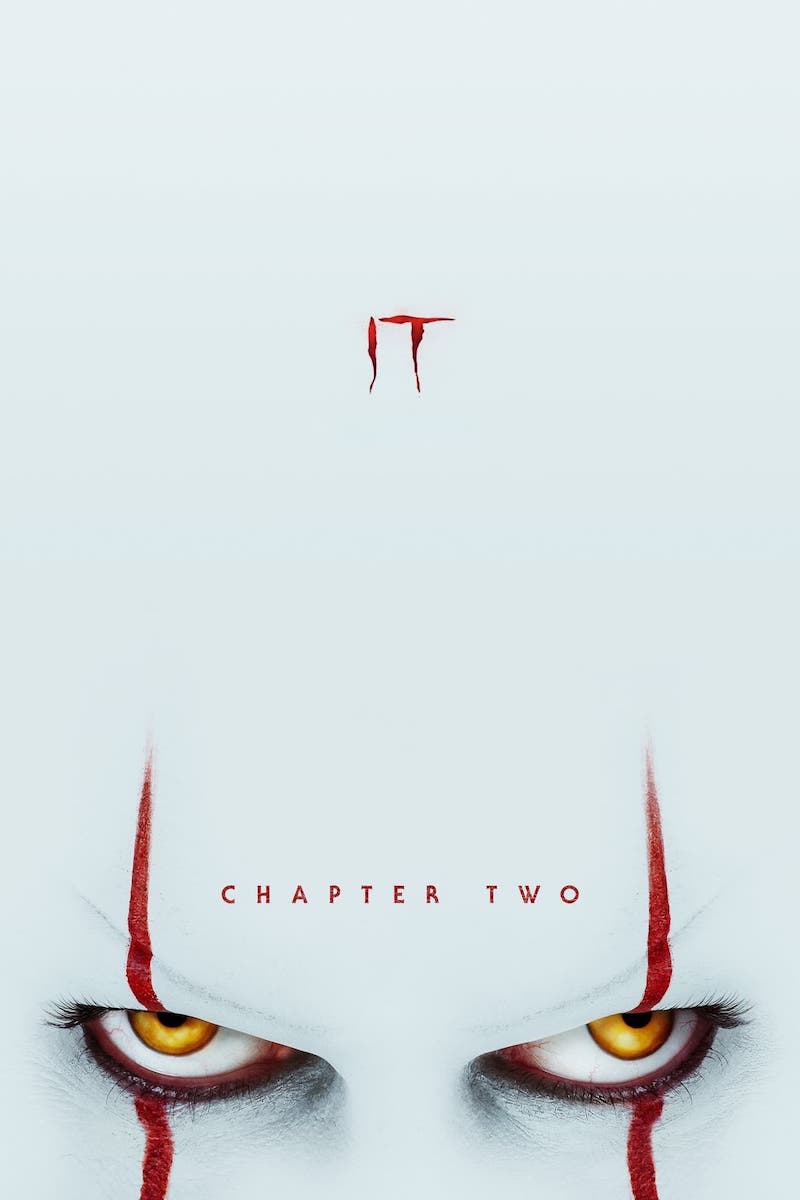