A unique take on the fantasy genre featuring a complex world mixing magic with steampunk. Carnival Row is the most ambitious series yet from Amazon Studios and, while it’s marked with imperfections, there’s enough substance here to draw in even the most sceptical of viewers.

Carnival Row is crime neo-noir fantasy focused on a series of brutal killings, against the backdrop of major urban centre ‘the Burgue’ (the great city of mankind) that has the feel of the early Victorian era. The series takes place there following a great war between several civilizations. At the core of the conflict was a land of untapped riches populated by fairy-like creatures called the Fae. Despite their apparent abundance of resources, the Fae haven’t chosen a path toward urbanisation and instead live a simple life marked by music and spirituality. 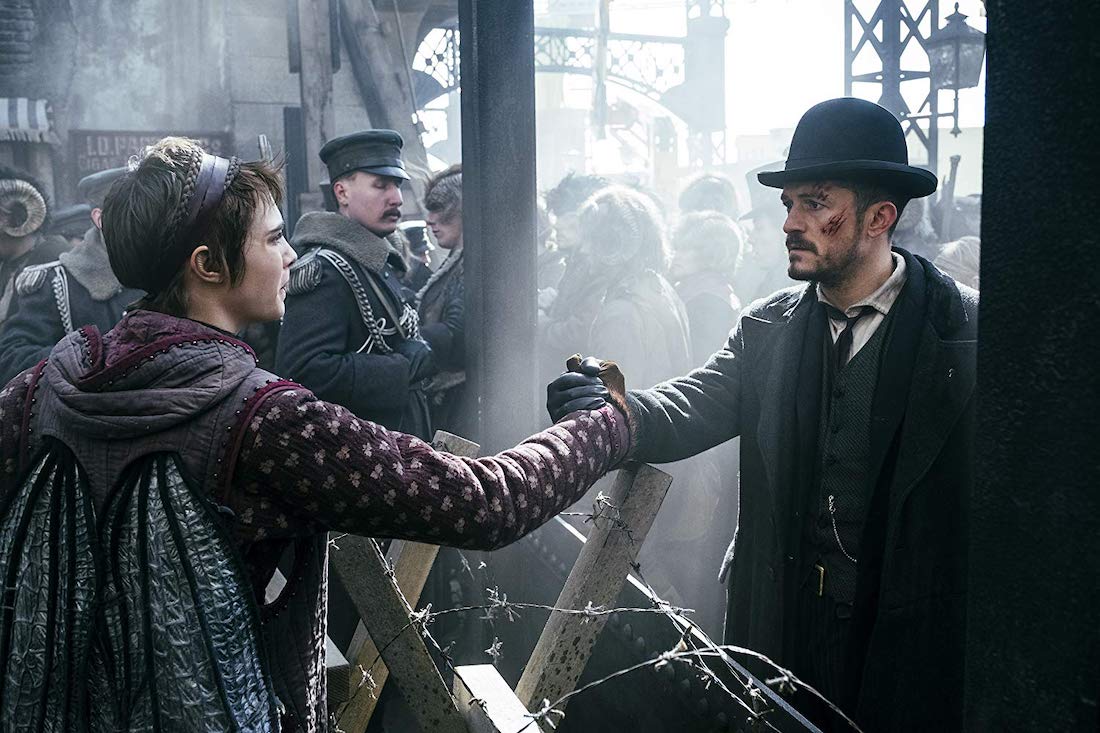 The tranquillity of the Fae is interrupted by the invasion of two armies: the conquering Pact and the Fae-defending Burgue. Although the series does commit one episode, “Kingdoms of the Moon”, to the war between the Pact and the Burgue, the focus of the series is on the post-war aftermath.

The Burgue and the Fae are defeated by the Pact, leaving the Burgue with a wounded national identity and the Fae as a people without a homeland. The city limits of the Burgue are bulging with refugees—not just Fae but other non-human beings (or “crits”). Those non-humans aren’t always welcome and tensions are raised amongst with the indigenous humans with instances of xenophobia. 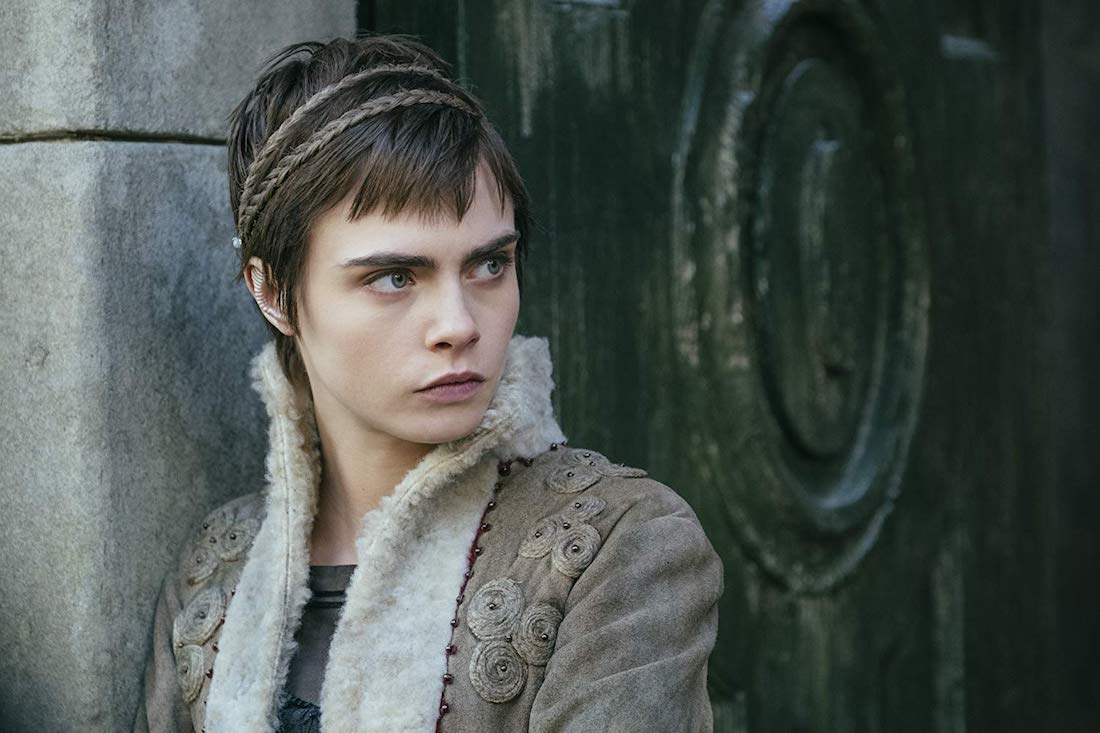 If all of this sounds a bit complex that’s because… well, it is. The level of worldbuilding being done by creators René Echevarria and Travis Beacham is beyond anything Amazon’s attempted in the past. But for those willing to invest the time needed to understand and appreciate this foreign (yet familiar) world, the payoff in the final two episodes is worth it.

However, it’s also understandable why Carnival Row won’t be for everyone. Plenty of people are going to get frustrated trying to keep track of not only the various different races but all the social rules and political intrigue. 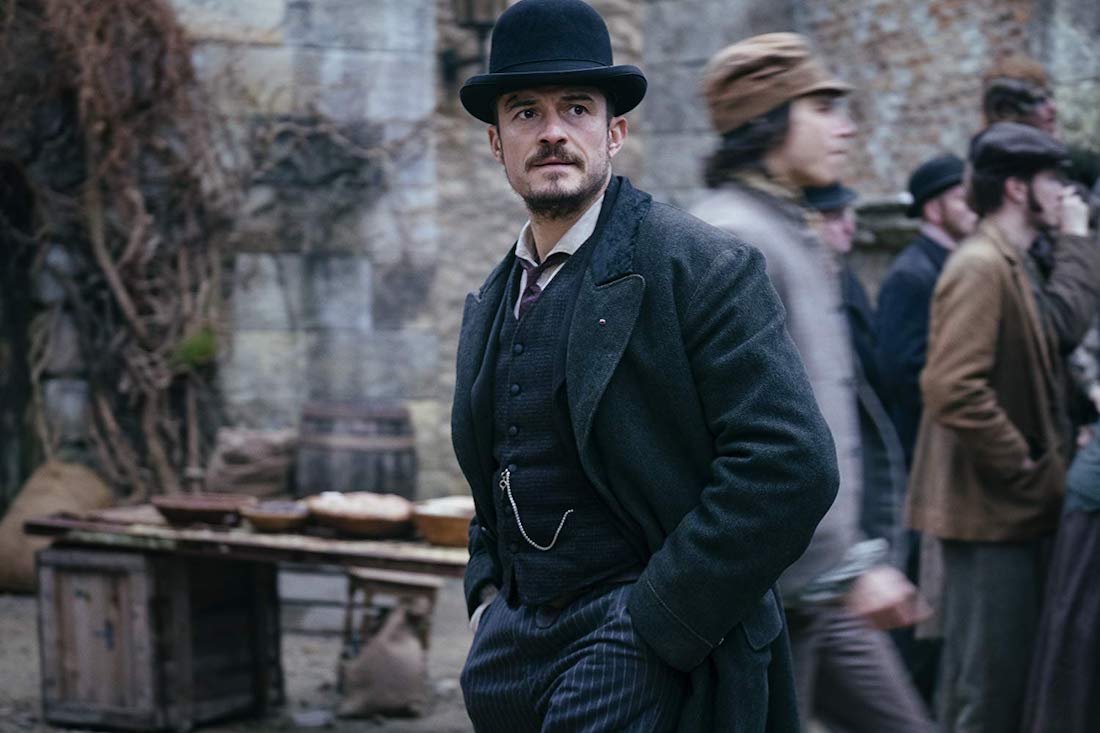 The series is based on a screenplay written by Beacham (Pacific Rim) that got kicked around several major Hollywood studios for nearly a decade and was once the focus of a fierce bidding war. In 2015, Amazon Studios announced they’d develop the film script into a TV series instead and Guillermo Del Toro was attached to co-write and produce, as was Neil Jordan (The Crying Game). Del Toro and Jordan eventually left the project but Beacham and Echevarria (The 4400) pressed forward.

In the end, the departure of those bigger Hollywood names may have given Beacham and Echevarria more freedom to create a series closer to Beacham’s original vision. Production on season 1 wrapped in March 2018, but it’s taken 18 months to reach our screens. This stoked rumours the series was a disaster-in-waiting, desperately trying to be fixed in post-production. 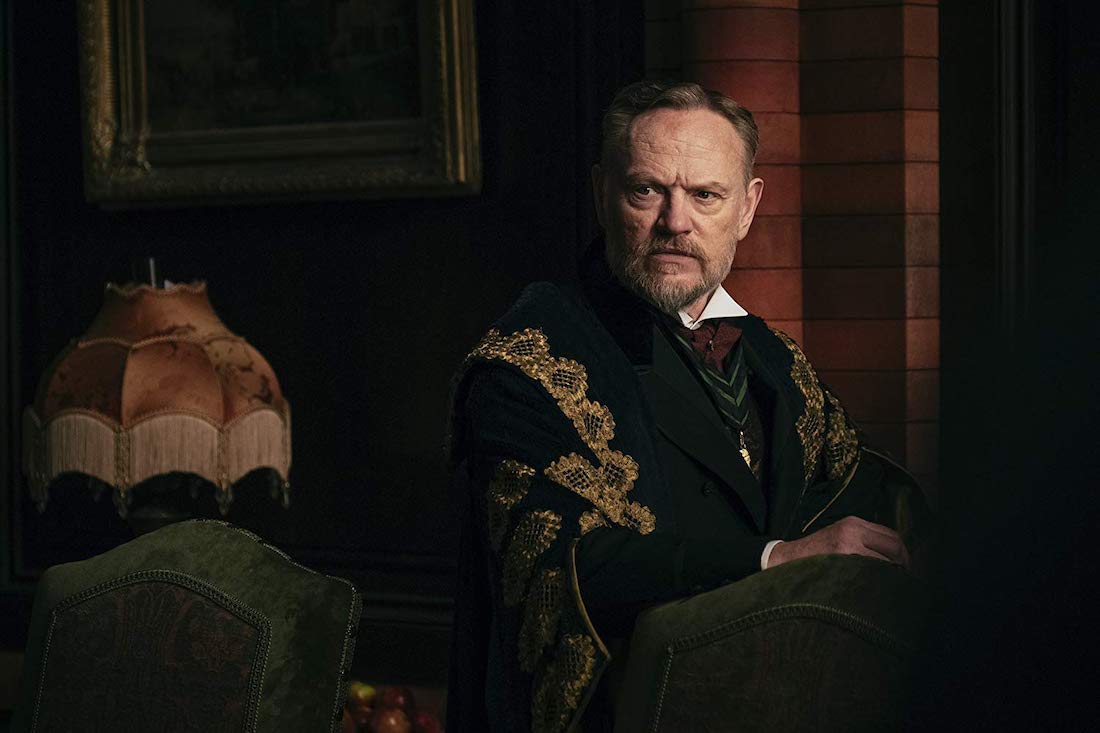 The truth is that Carnival Row required a lot of VFX work after the principal photographer was over. But the untold hours in post-production are well worth it (especially if you’re able to watch in Ultra HD). The landscapes are gorgeous and the blend of practical and digital VFX is a delight.

But, in some ways, the show’s ambition is also its downfall. Its odd mix of genres creates a distinct drama that won’t appeal to everyone. At times, Carnival Row seems unsure of its own identity—is it a murder mystery, a love story, or a political drama? Sometimes it reminded me of The Lord of the Rings, other times it was like a fantasy hybrid of Sherlock and House of Cards. 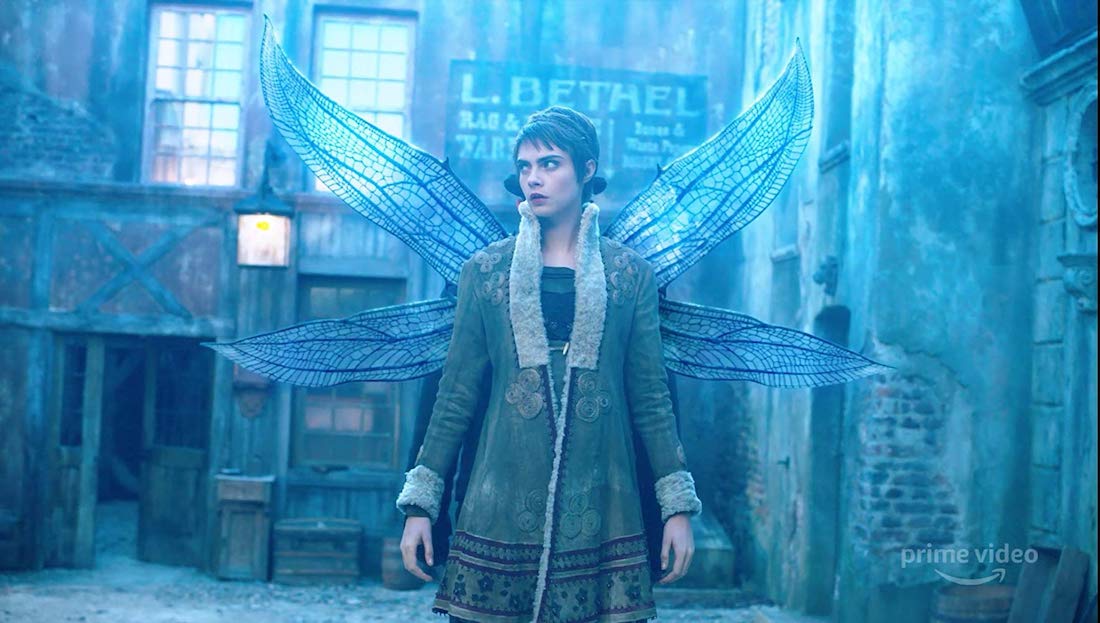 Near-universal applause should be heard on the casting of the two lead actors: Orlando Bloom and Cara Delevingne (Valerian and the City of a Thousand Planets). They bring their A-game to their respective roles even if their onscreen chemistry is a little tepid. Bloom’s at his best when his character, Inspector Rycroft “Philo” Philostrate, is hot on a case trudging through streets and sewers in pursuit of a killer. Delevingne sizzles as the rebellious Vignette Stonemoss, a Fae who resists the oppressive nature of her adopted home and always looks poised for a fight. And as she shows several times throughout the season, Vignette is a strong woman in her own right and doesn’t need to wait for Philo to save her.

These characters met during the war (explained in the third episode) but became separated at the moment the Burgue were forced to retreat. Theirs is wartime romance Hemingway would enjoy and they prove to be two people with more similarities than either expected. Vignette believes Philo is dead and, after seven years, he likewise assumes she didn’t survive the war. Fate brings them together again in the Burgue where Philo (now a detective) is tasked with investigating a spate of brutal murders. 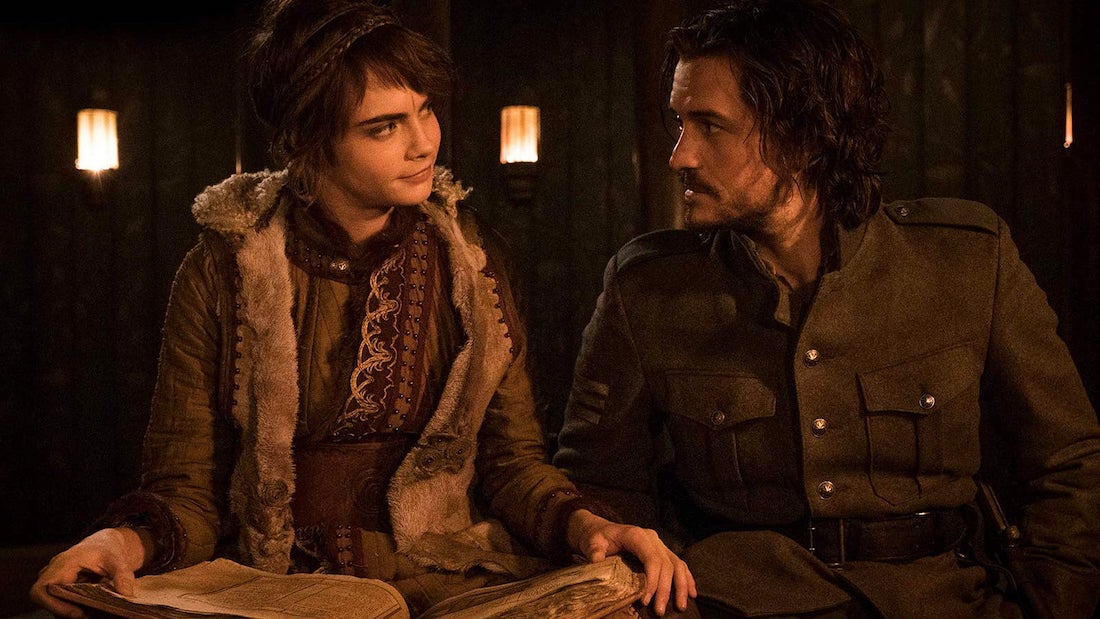 The name ‘Carnival Row’ comes from a section of the Burgue dominated by non-human creatures, where sin is for sale and nearly any appetite (sex, gambling, fortune-telling) can be sated. “The Row” as many of the series characters refer to it, draws a good deal of inspiration from the modern French Quarter in New Orleans. While not all of the key events of the series take place there, the location serves a vital illustration of the moral corruption of the Burgue society.

As for Philo, he seems to find himself most at home on The Row, even staying in a halfway house run by a widow. Vignette finds The Row to be the last place of refuge for her as she stays with a former friend-turned-prostitute. When Philo and Vignette inevitably cross paths, the ghosts of their past, mixed with current danger, yields plenty of drama that ends in a way that rocks the very foundation of Burgue society. 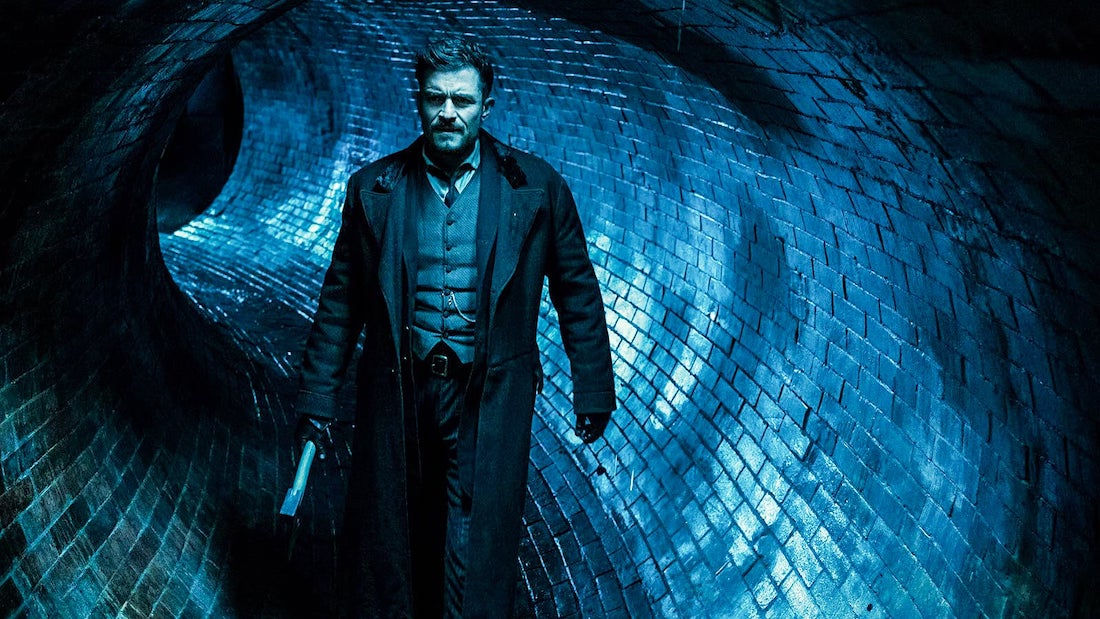 It one can make it through the first few episodes of Carnival Row, where the enormous task of world-building is focused, the series eventually delivers enough twists and turns to make one’s patience worth it. If I have any complaint about the second half of the season, its that the final 45-minutes of the finale is very rushed. It’s as if the writers were only suddenly aware they had to wrap up the story now. It might be a product of careless editing or overly ambitious storytelling (I suspect the latter) but, either way, it’s a sin worth forgiving to reap the rewards elsewhere.

Carnival Row is destined to be unlike anything else you’ll watch on television this year, and Amazon has announced it will be back for a second season.