7 years after Angels & Demons, and a full decade since The Da Vinci Code, the latest movie adapted from a Dan Brown book finally arrives in UK cinemas. Although his books were extremely popular a decade ago, the hype surrounding Brown’s work has decreased. Commuters have other page-turners their tube journeys, workmates are no longer discussing conspiracies involving the Opus Dei, and even the Catholic Church has stopped caring about the author’s impudent historical inaccuracies. Still, as the latest films were all hits, and a new book’s being written, the Ron Howard/Tom Hanks duo is back with a new adventure for Robert Langdon, the modern-day Indiana Jones specialising in religious iconology and semiotics.

Since The Da Vinci Code’s actual sequel, The Lost Symbol, hasn’t yet made it to the big screen, Inferno becomes the third movie outing, based on the fourth Langdon novel. This time there’s much less focus on religion, as Inferno’s story concerns literature, although with a typical Brownesque twist: recovering from a head wound, bed-ridden Langdon is having hellish visions and nightmares in an Italian hospital that remind him of Dante Alighieri’s poem “Inferno” (Italian for “Hell”). As Dr. Brooks (Felicity Jones) explains, he’s suffering from short-term memory losses, and no one really knows what he was doing arriving in Florence. Naturally, Langdon’s soon forced to go on the run and retrace his steps, deciphering symbols and interpreting riddles along the way. 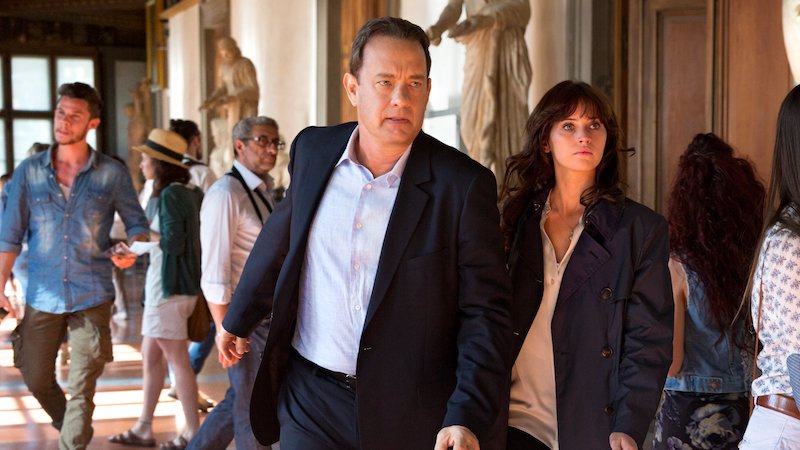 Unlike the previous installment, the focus on symbolism is much diminished during Inferno, quite drastically when compared to The Da Vinci Code. Even though the exploration of history and semiotics is a predominant aspect of Brown’s oeuvre, director Ron Howard seems to have understood that those topics don’t translate very well on camera. He already favoured action a little more in Angels & Demons, and Inferno marks a further change of style. It still plays as a thriller, but the mystery’s been stripped to the bare minimum to make space for popcorn action.

Clues now have the sole purpose of giving Langdon a reason to run from one place to another: whether by car, train, or foot. Everything is drowned in the continuous, headache-inducing background noise of explanations, spelling out who he’s running from, where to, why, to find what, so that the audience doesn’t get lost. Well, bad news: you’ll get lost anyway. A way of making Inferno vaguely interesting would be to time how long it takes before Langdon’s trivia on Alighieri’s life, a Venetian Doge’s burial, or a painting, stop making any sense have any clear connection to the plot. 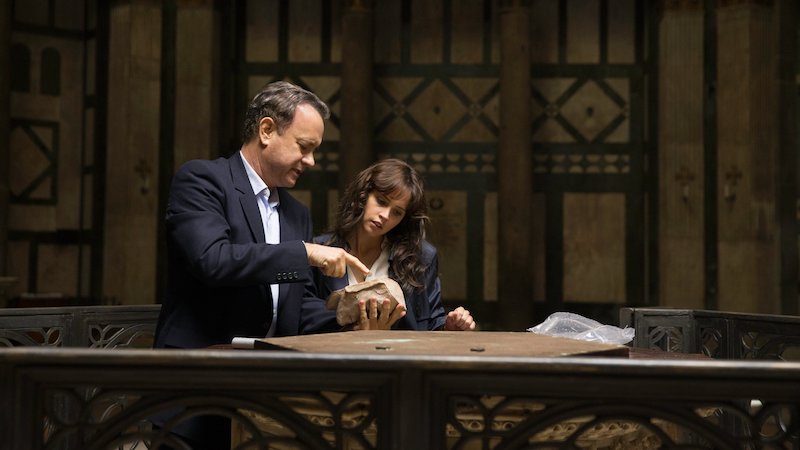 Let’s not forget the plot twists, too. There’s no Dan Brown story without the inevitable coup de théâtre, and Inferno falls into line with two-faced characters, international agencies double-crossing one another, and a big reveal. There’s always a big reveal, usually in the form of a good guy turning out to be the bad guy. In the earlier movies it was enough to look at cast list to spoil a character’s switch of allegiance, and there are no surprises here either. Predictably, all this betraying and secretly working against each other creates enormous plot holes and confusion in a fast-paced mess that Howard barely holds together. Fans of the novel will be delighted to know the ending’s been changed, however, so they can keep guessing how they’ll be disappointed.

It’s difficult to judge how Inferno compares to the other titles in the series. Ultimately, it doesn’t have a grain of The Da Vinci Code’s pop culture allure, and none of the slick trash of Angels & Demons (the parachuting Pope remains unparalleled). Still, it’s just as mediocre in its own special way, and if you’re a Dan Brown fanatic you certainly won’t want to miss it. On the other hand, if you’re passionate about Dante Alighieri’s work, or an expert in literature yourself, be warned that Inferno won’t be as stimulating as it suggests it’ll be.