Before anything even appears onscreen, Horror Express announces its intentions to audiences: an approaching train whistle drones over a black screen, going on for just long enough to become removed from its source and begin to resemble a ghostly howl. The train sounds fade into a whistled lullaby, one that eerily resembles the opening theme from Rosemary’s Baby (1968), before this also fades into something different altogether: a psych-rock guitar that introduces an orchestra. Gothic horror turns to 1970s kitsch, turns to sweeping historical epic, all in the span of a minute of music.

To which of these moods does the film ultimately commit? A nice mélange of them all, it turns out. Horror Express lies at the transcendently fun sweet spot between Gothic horror, period drama, pulp science fiction, and exploitation kitsch. Think characters from A Passage to India (1984) transposed into The Thing (1982); a seemingly incompatible assortment of tones and genres that, miraculously, fit together like jigsaw pieces to form one of the most strange and purely fun horror films of the ’70s. 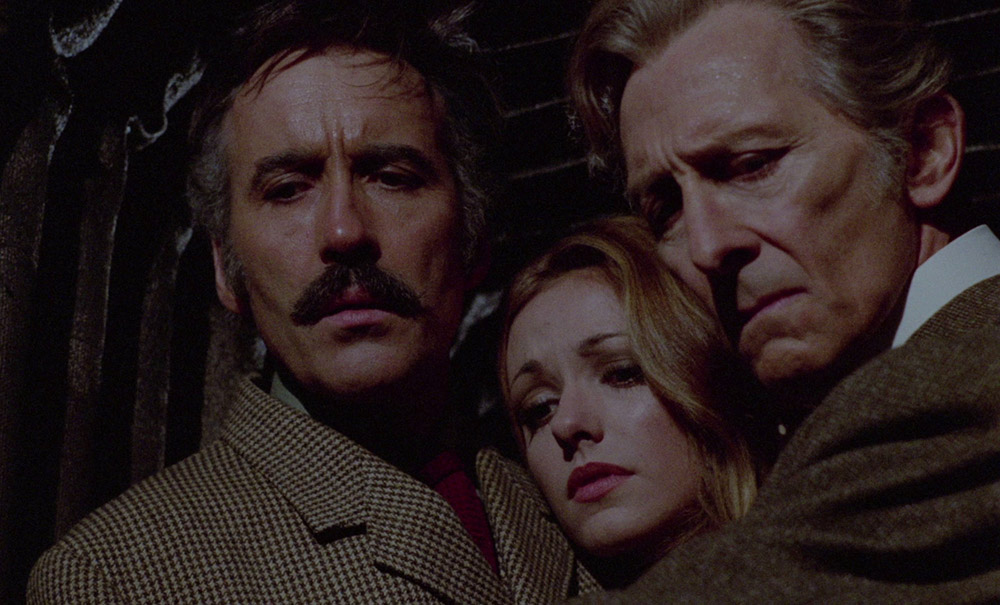 As is the case with their Hammer films, Christopher Lee and Peter Cushing take centre stage, playing two anthropologists aboard a trans-Siberian train to Moscow with a secret special guest in tow: a humanoid fossil that may be the evolutionary missing link. Unfortunately, it quickly becomes all too apparent that the fossil isn’t a fossil at all when a smattering of corpses begins popping up around the train, all with blood dripping from their glassy white eyes. What starts as a typical escaped-prehistoric-ape-on-the-Trans-Siberian-Express film (how many times have we been forced to sit through that story?) turns out to only be the beginning of a convoluted saga that navigates zombies, aliens, religious fanatics, and a lot of shocking gore, without a single false step.

It truly is the pulpiest story ever told, but anyone who expects the all-out campiness of, say, sleazy train horror film Terror Train (1980) has another thing coming. Spanish director Eugenio Martin gives the film a more respectable sheen than its blood-soaked thrills and chills called for and, against the odds, it ends up being a genuinely effective horror thriller. The camp factor is there, don’t get me wrong (how could it not be, given the ape-man wreaking supernatural havoc?), but it’s also a lean slab of fast-paced, technically impressive filmmaking on a tight budget and tighter script. It’s rare for a horror film to get even one idea right, yet Horror Express manages a balancing act of tone and ideas and makes it seem almost effortless. 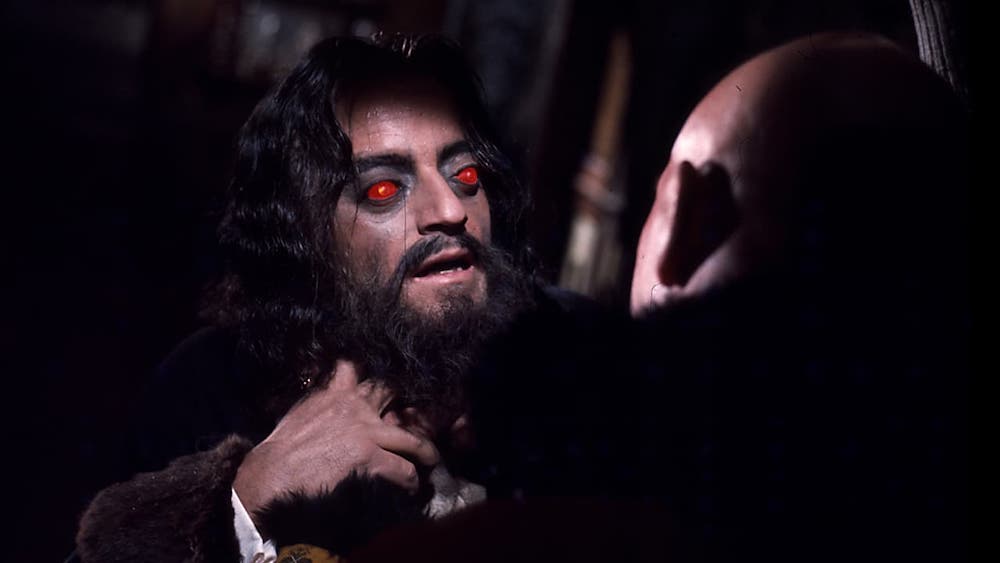 Of course, one of the great joys beyond the wackier-than-wacky premise is the dynamic between Lee and Cushing, maybe the most iconic acting duo in horror history. It’s hard to pick a favourite pair of performances from them given how they elevate just about everything they appear in, but their work in Horror Express is certainly up there. As with most of their roles, it’s more than clear that both classically trained actors are having a great time playing up both the high and low art of the story.

Cushing’s performance is most surprising of all given that he experienced likely the biggest tragedy of his life shortly before filming began—his wife of 28 years had just died, and the only reason he showed up to set at all was to inform the crew in person that he couldn’t bring himself to make a film so soon after her death. Of course, he did end up starring and doing a great job of it, thanks in no small part to Lee’s persuasive charm, and the world is all the better for it. 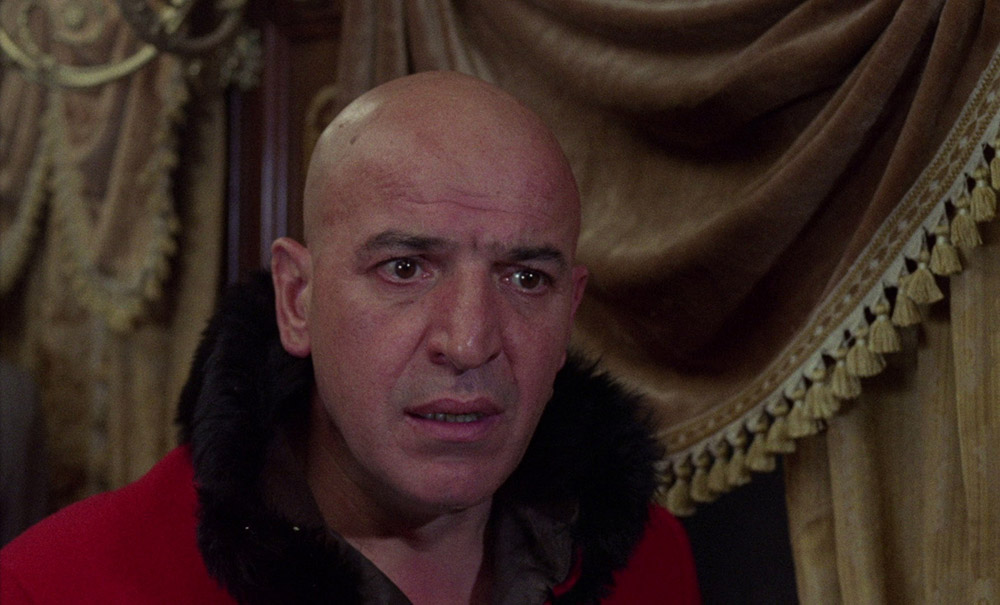 Argentinian actor Alberto de Mendoza nearly steals the show from both leads, though, as a Russian Orthodox monk who comes to believe the creature is not a prehistoric missing link but rather Satan himself. His character, clearly based in appearance and personality on Russian mystic Rasputin, is easily the most eccentric in the film, which also makes him the most fun. His is the meatiest role and, without spoiling anything, also the one with the most dramatic character development as the plot unspools.

And then there’s Kojak himself, Telly Savalas, hamming it up as a Russian captain investigating the murders. His performance is the only one to self-consciously enter camp territory, infusing welcome humour into the film amidst a set of otherwise fairly sincere performances. The fact that he was headlined alongside Lee and Cushing is probably just a matter of star power, as he only really appears in the final third of the film, but he certainly leaves his mark in his brief time onscreen.

That sudden arrival of a major name in the eleventh hour is perhaps to be expected in such a strange, consistently surprising film. All of its disparate elements pile high over the course of the film, like a cinematic game of Jenga, always seeming like it should be toppling over yet somehow remaining perfectly stable. Call it serendipity or a left-field horror classic, but I call it one of the bloodiest, wackiest, most perversely fun 90-minutes in classic horror. 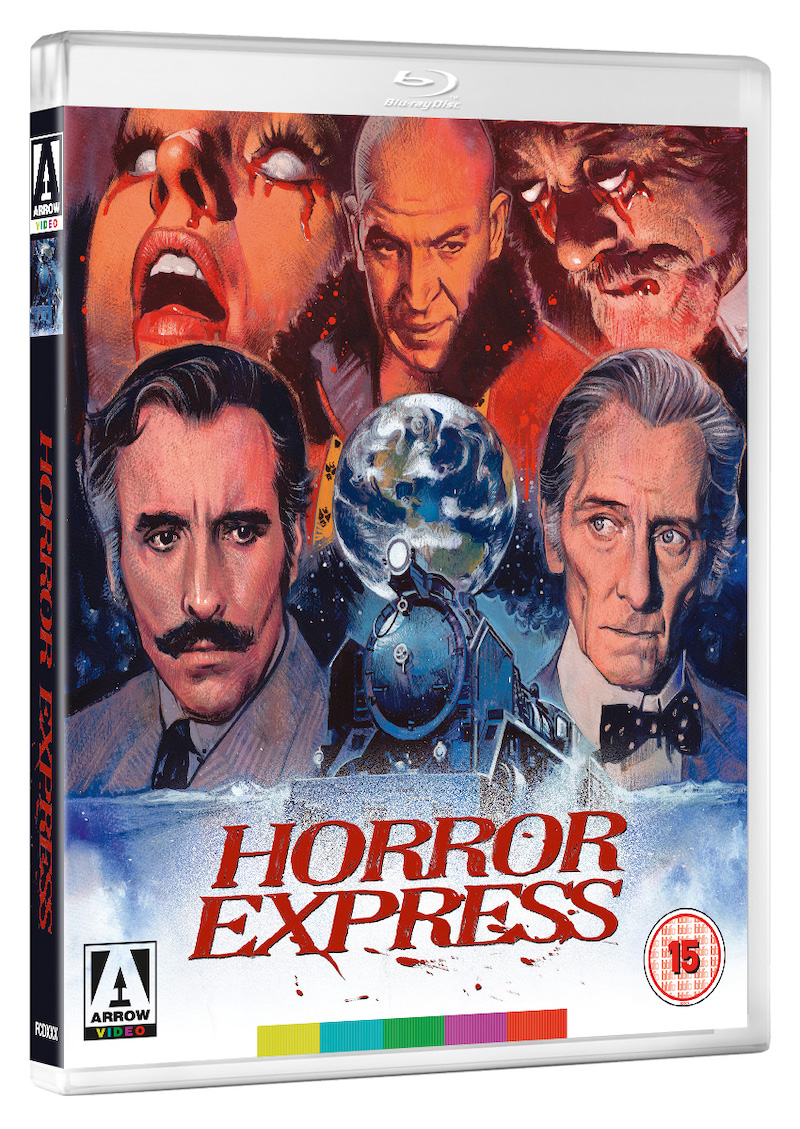