Alice returns to where the nightmare began: The Hive in Raccoon City, where the Umbrella Corporation is gathering its forces for a final strike against the only remaining survivors of the apocalypse...

It’s surprising to realise the Resident Evil movies have produced six instalments over 14 years, and somehow managed to avoid turning into a straight-to-video franchise. The movies have made an astonishing $1.2 billion at the worldwide box office since 2002, and last year’s conclusion hardly demonstrated audience fatigue with the franchise. It grossed a record $312m towards that figure alone. And unlike the Underworld movies, which are on a similar plane of quality, Resident Evil hasn’t done a random “prequel” with a new cast, or faced very many obstacles that weren’t of its own creation. What I’m saying is, I respect what these movies have achieved, although I can’t help thinking it’s a sad indictment of what teenagers are happy to pay money to see nowadays.

Paul W.S Anderson (hereafter PWSA) returns for the fourth time to the franchise he created as writer-producer-director (having skipped the first two sequels), for what promises to be the “final chapter”. I’m naturally wary of such claims, in the wake of Freddy’s Dead: The Final Nightmare (1991), and the Saw franchise being revived later this year, despite Saw 3D: The Final Chapter (2010) appearing to wrap up the story. Without spoiling things, Resident Evil: The Final Chapter does appear to end the story, but the final moments leave the door worryingly open for some form of continuation. I hear that Capcom are instead looking to reboot the series, doing something more faithful to the video games Paul W.S Anderson almost immediately strayed from.

There’s a helpful reprise of events in life of Resident Evil’s protagonist Alice (Milla Jovovich) in the opening 6 minutes of The Final Chapter, which knowingly doesn’t stray much beyond what happened after the first two movies — subtly confessing that the events of Extinction (2007), Afterlife (2010), and Retribution (2012) were grandiose wheel-spinning designed to snaffle up bored teenager’s money. Or maybe there was a level of embarrassment involved, as the franchise veered into outright ridiculousness the moment a clone army of Alice’s showed up. Good luck trying to remember what happened in any of the previous, as they all just blur into a ludicrous cheese-dream of slow-motion sub-Matrix fights shot in front of terrible greenscreen. 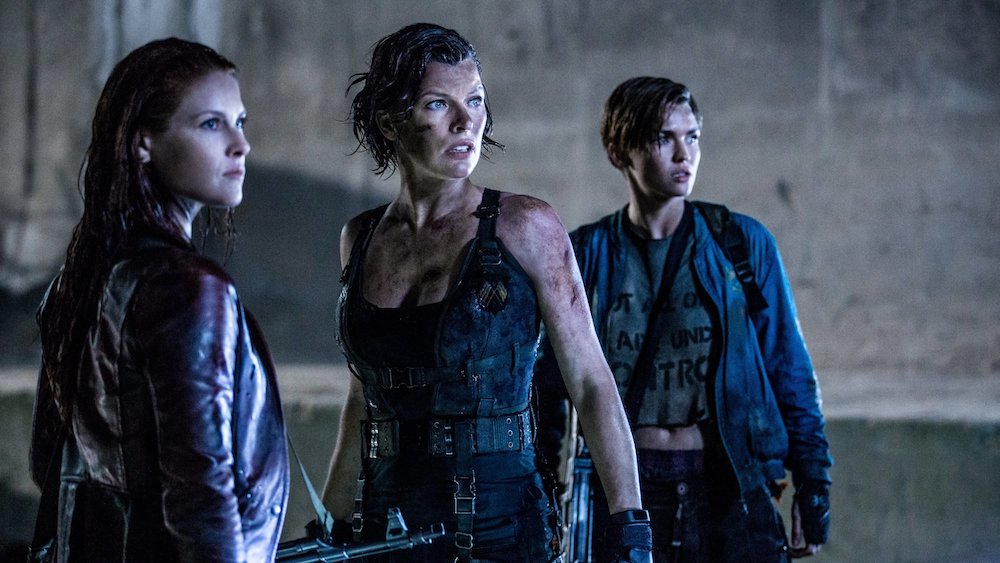 Going into The Final Chapter I was prepared to cut this movie some slack, because having the goal of ending a story could give the story the focus and a clear goal the others never really had, with their insane cliffhangers endings that always got resolved in the most tedious of ways. In Retribution: enormous zombie-dragons over the White House! In The Final Chapter: Alice defeats one dragon in the streets of a post-apocalyptic Washington D.C.

It’s certainly true that The Final Chapter works better than the previous two movies (I have a soft spot for Russell Mulcahy’s Extinction with its ‘Mad Max in Vegas’ vibe), and that’s largely because you have a feeling things are coming to a head. PWSA does the cliched thing of bringing events ‘full circle’, so Alice is now heading back to Racoon City and the Hive facility from the original movie, chased by the franchise’s one memorable villain, Dr. Isaacs (Iain Glen), in some enormous battle tanks themselves pursued by thousands of infected zombies. Arriving in Raccoon City, Alice once again teams up with some fellow survivors, including old comrade Claire Redfield (Ali Larter), and eventually discovers the truth behind her own existence and the familial backstory to the Umbrella Corporation responsible for releasing the T-Virus on the population. 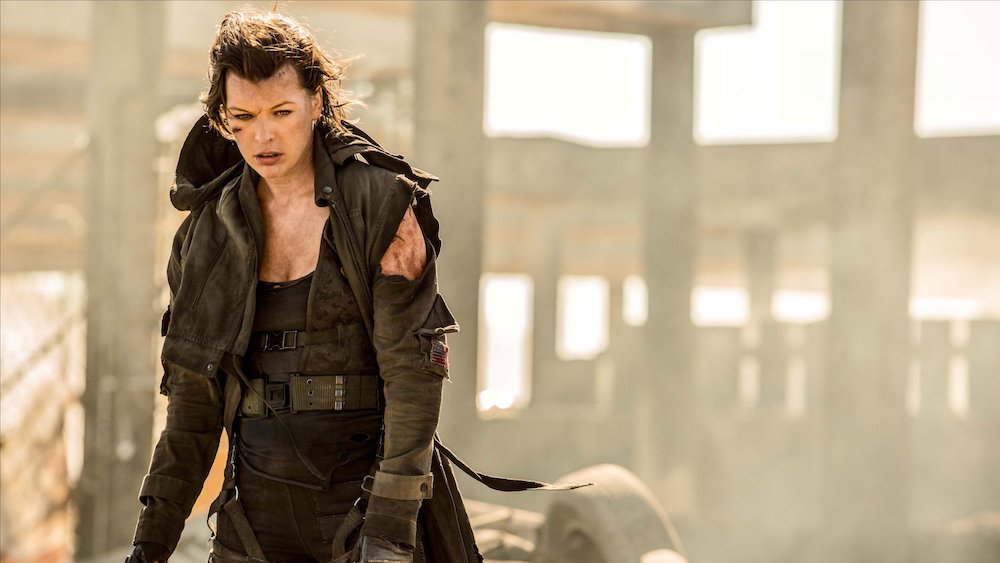 My issue with this movie, but more so the previous two, is that they offer absolutely nothing beyond a strict formula of run, escape, get caught, escape, get caught again, repeat until there’s a showdown with the big villain. There are no quiet moments and character-building, so whenever Alice discovers something shocking about her past, it leaves absolutely no impression on the audience, because Alice isn’t a developed person we feel any attachment to, or connection with. She’s little more than a live-action doll who defies physics at every turn, that PWSA throws into all manner of crazy situations you’re never scared about her failing to overcome, somehow.

Consequently, The Final Chapter again falls into the same trap of being 106 minutes of ‘third act’, which motors along at a fair gallop, but is always as interesting as watching the world’s longest video game cutscene. PWSA does have a kinetic camera style, and the editing by Doobie White (Crank: High Voltage) occasionally delivers an action set-piece that isn’t too much of a headache to watch, but without any substance to back anything up it’s all very empty. That might not be too much of a problem if the performances were great, but Jovovich long ago decided that Alice was going to be an inscrutable bad-ass you can’t feel anything for, and Iain Glen’s clearly cashing a cheque during Game of Thrones’ off-season.

The only real positives here are backhanded compliments: the 106-minute runtime isn’s too gruelling (although it’s about 15 minutes longer than most of the other sequels), the special effects seemed better (despite its $40m budget being $20–25m less than the previous two efforts), and it does manage to justify the title by bringing the key issues to a close (with the emergence of an antivirus, natch). But I’m not sad this saga has called it a day, because it’s been creatively bankrupt since 2007, and skewed so far away from the atmospheric video games it’s likely damaged the Resident Evil brand. A reboot would be desirable, if one adapts the source material with greater reverence, but I need a long break from talk of Raccoon City and the Umbrella Corporation before I’d be excited to see one.