The 1970s were a disastrous time for the US. With the country’s economy at an all-time low since the 1930s, President Nixon’s infamous Watergate scandal resulted in a nation losing confidence with their government. However, the 1980s saw Ronald Reagan’s “Reagan Revolution” come to fruition and faith in the US economy through ‘Reaganomics’ was restored. Consumerism increased and faith in obtaining the so-called American Dream was finally restored. In cinemas, it was the age of the blockbuster. Breaking away from the paranoia of the ’70s, movies such as E.T: The Extra-Terrestrial (1982) and Raiders of the Lost Ark (1981) appealed to filmgoers of all ages, especially teenagers.

The mid-1980s was the heyday of the teen movie. The introduction of MPAA’s PG-13 certificate helped directors such as Steven Spielberg (Jaws) and John Hughes (Pretty in Pink) tap into this emerging youth market. Expanding on the popularity of high school movies from the 1950s, Hughes’ target audience was the modern schoolgoer with Sixteen Candles (1984) and The Breakfast Club (1985). They were light-hearted looks at youth culture and the hierarchy of the US high school cliques; cheerleaders, nerds, jocks, and outsiders. However, given more creative freedom thanks to PG-13 certificate, St Elmo’s Fire (1985) and River’s Edge (1986) gave directors a license to work with mature themes for a younger teen audience.

Arriving at the end of the ’80s was the deliciously dark comedy Heathers (1989). With a budget of only $2M, Heathers was kept simple and relied on the sharp script by Daniel Waters. It was the provocative response to teen comedy sex farces such as Porky’s (1981) and Screwballs (1983), delving into the darker side of high school life. Touching on controversial subjects like teen suicide, homosexuality, and rape, the script sewed these themes into the fabric of the high school film sub-genre. After many failed attempts of getting his screenplay made by Stanley Kubrick (The Shining) as intended, director Michael Lehmann agreed to direct with the backing of Batman Returns (1992) producer Denise Di Novi. 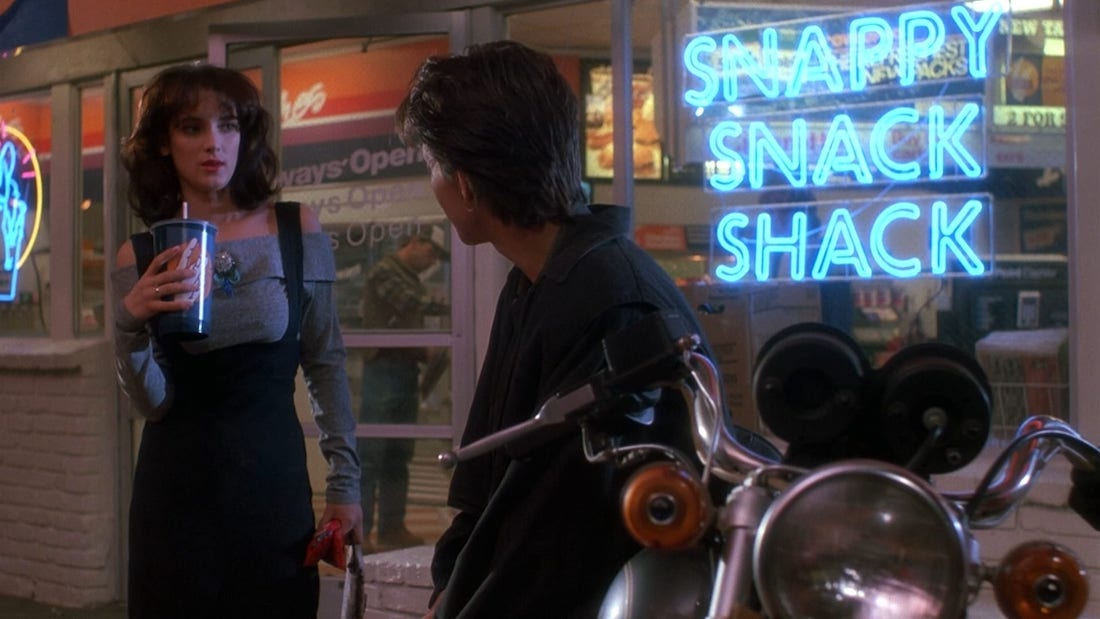 Veronica Sawyer (Winona Ryder) is a member of the most popular clique in Westerburg High School along with the three Heathers; Heather Duke (Shannen Doherty), Heather Chandler (Kim Walker), and Heather McNamara (Lisanne Falk). Despite their popularity, they’re also feared and hated by most of the student body. Eventually, Veronica begins to question the clique’s actions towards other pupils and misses her old life. Then, rebellious newcomer Jason “J.D” Dean (Christian Slater) catches Veronica’s eye in the cafeteria and it’s not long before they begin an intense and self-destructive love affair. Charming her into his twisted worldview, there begins a plan to take down the Heathers in a series of murders staged to look like suicides.

After establishing herself as the alt Goth queen of the late-80s with Beetlejuice (1988), I’ve always been a fan of Ryder. She always plays her characters enthusiastically. Her quirky and lively performance as Veronica remains one of the strongest aspects of the movie. However, due to her performance in Labyrinth (1986), the role of Veronica was originally offered to Jennifer Connelly, who turned it down. Aged only 15 during principal photography, Ryder’s agent at the time begged her not to take the role in the black comedy as it would ruin her promising young career. Thankfully ignoring her advice, Ryder gave one of her best performances. Veronica is anxious, angry, confident yet conflicted, and although commuting a murder she acts as the moral compass of the movie. Veronica is a sign that even good people can be easily led by bad influences of teen angst.

There’s no escaping the comparison of Christian Slater’s performance against Jack Nicholson in One Flew Over the Cuckoo’s Nest (1975). Lehmann even told him during the shooting of a scene to tone it down, until he realised it was in Slater’s natural rhythm. From his first line, “greeting and salutations”, J.D’s a character one can imagine a young Nicholson playing with relish: a good-looking rebel with a smart mouth, a taste for mischief, and murderous intentions. Although the role doesn’t quite call for the manic energy of Slater’s performance as a pirate DJ in Pump Up the Volume (1990), his screen presence, intelligence, and charm is undeniable. He’s a rebel flippantly named after Rebel Without A Cause (1955) actor James Dean, and as the film develops J.D’s psychopathic tendencies become prominent but Slater’s never less than convincing. 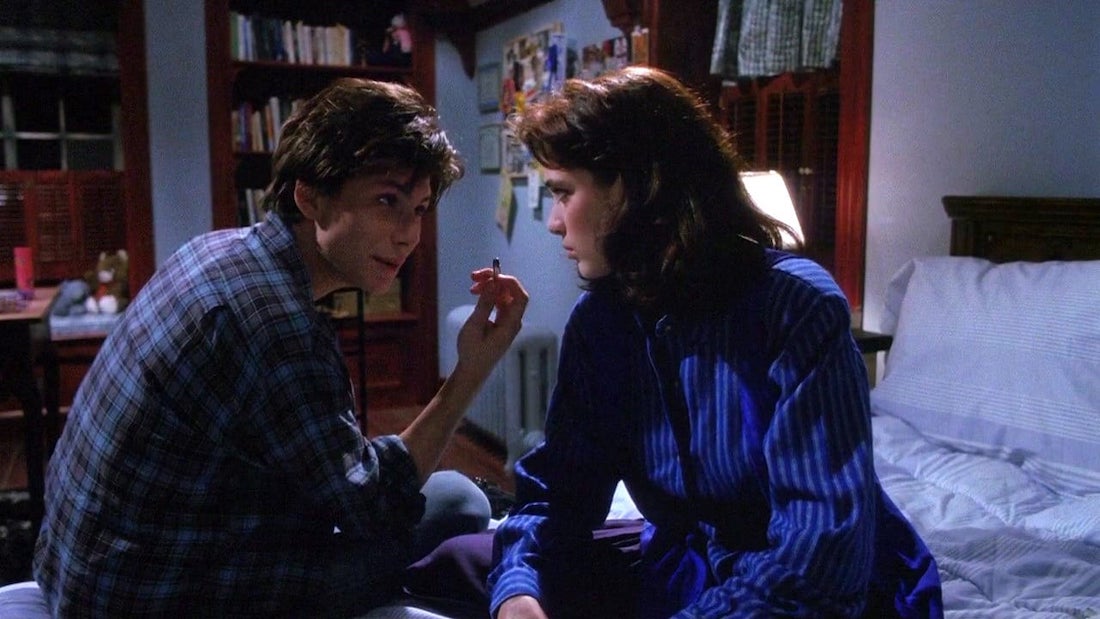 Due to Heathers’ dark subject matter, many actors and actresses turned down roles. Early choices of Veronica were the aforementioned Connelly, but also the young Drew Barrymore (Far from Home). Waters unbelievably didn’t think Ryder was enough to for the role. At the time, relatively unknown actor Brad Pitt auditioned for J.D but was rejected because his persona was too nice and they didn’t think he’d be credible as a psycho. After Ryder was given the role of Veronica, Slater was signed up shortly thereafter. In hindsight, they’re perfectly cast and have never been better.

All three of the Heathers also stumbled upon their roles by chance. Heather Graham was 17 when offered the role of Heather M, but her parents found the script too offensive and dark so refused to let her participate. Former model Lisanne Falk joined fellow Say Anything (1989) cast member Kim Walker as Heather M., whereas Walker took the role as Heather C. because she was dating Slater at the time. Shannen Doherty originally wanted the role of Veronica, but it was taken so producers asked her to audition for Heather D. Although she secured the role by impressing producers with an “amazing” audition, Lehmann has since stated that Doherty was difficult to work with. Refusing to say explicit lines and refusing to dye her hair blonde, Doherty claims she was disappointed with the movie because she expected it to be more drama than a dark comedy.

The cinematography by Francis Kenny and Lehmann’s direction can be compared to David Lynch’s Blue Velvet (1986). It’s not just the white picket fence suburbia during the opening sequence, but the consistent overly lit dream like filter throughout. It contrasts nicely against how dark the story actually is. There are some impressive surreal dream sequences, my favourite involving all the students at a funeral wearing 3D glasses as if they’re watching a movie. Lehmann delivers a satirical view of our emotional detachment to tragedies in the news, by viewing them more as entertainment rather than reality. Even scribblings of Veronica’s diary entries can make one question if the movie is the imaging of her frantic writing or reality. 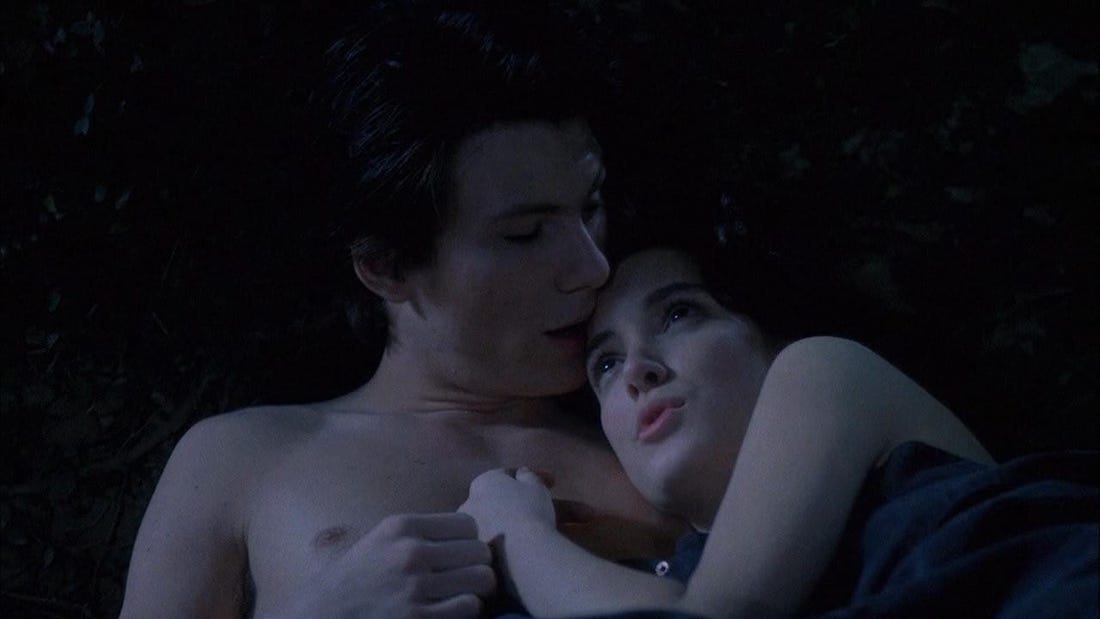 I can’t think of many movies that use costuming colours as a form of symbolism. Ruby Dillon’s costume design and use of colour are stunning. It emphasises how significant colour is as a narrative device. Four colours dominate Heathers; red, green, and yellow—each associated to a different character. Heather C. is the leader of the clique and wears red (historically associated with power) and as we’re introduced to her red scrunchie in the opening sequence that serves as the most important totem. Heather D. is green because she spends essentially the first half of the movie ‘green with envy’ that she isn’t the leader. But when Heather C. dies, Heather D. retrieves the red scrunchie and thus asserts her dominance. Heather M. is given the cowardly colour of yellow. Constantly in fear of losing her status and feeling the wrath of Heather C., Veronica changes her colours often as she’s the expressive one in the group. Wearing a monocle, much like Ellen Page in Juno (2007) with her pipe, she sets herself apart from the rest with her quirky style. Switching her colours consistently from blue to grey, she struggles to find her own identity and conform to a high school tribe.

With the colourful framework in place, the set design and lighting work well together, making everything look bright and colourful. However, it’s important to note that the two main colours in Heathers are red and blue because the 1980s was Reagan’s decade, and as Heathers was in production the US was rife with Cold War paranoia. The set design and lighting could be interpreted as a bitter commentary on the Reagan years. The colour red is obviously a symbol for communism and the dictatorship of USSR. The font of Westerberg High School on a banner is red, the oppressive jocks’ jerseys are red, even the milk cartons the students drink from in the dining hall are red. This colour is seen as evil and slowly taking over the American population. Under the sea of red of the school’s pep rally, is the boiler room where the final sequence of J.D. attempting to destroy the school takes place. Bathed in ominous neon blue light (Veronica’s signature colours), Veronica puts a stop to J.D’s drastic plan. Lehmann is suggesting the destruction of the communist red will not resolve anything, but the freedom of blue will set society or Westberg High School free.

Heathers does have its flaws. Although it perfectly turns the film aesthetic John Hughes popularised on its head, it conforms to much of the teen movie traditions, with snappy dialogue, underdog heroes, and a beautiful cast. However, unlike most teen flicks at the time, it managed to portray a capitalist message of the era. In the same vane as John Carpenter’s They Live (1988) and Brian Yuzna’s Society (1989), Heathers satirised the capitalist structure so prominent in the Reagan Era. The facade of cheery 1950s conservatism and ruthless consumerism is depicted by both the adults and students. Each time Veronica sits down with her parents the shallow repetitive conversations always results in Veronica calling her dad an idiot. Along with the cruel hierarchy of Westerburg High School and the classroom division, Heathers captures the late-1980s era of Reagan perfectly. 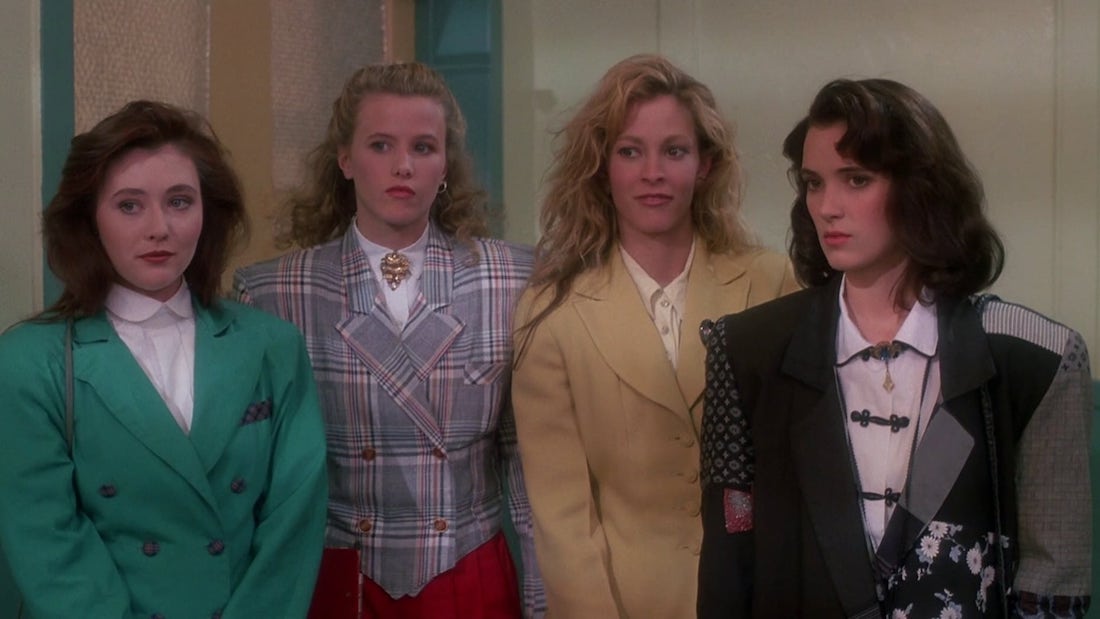 Upon release, audiences and critics didn’t see the satirical perspective Lehmann and Waters aimed to express. Outraged parents objected towards Heathers’ dark themes and thought the injections of humour were irresponsible. A comedy about teen suicide (although, ironically, nobody kills themselves) and taboo subjects such as sexual assault felt beyond the pale. Three characters attempt to rape Veronica in the movie and several are forced into sexual acts against their will. Needless to say, distributor New World Pictures closed weeks after the initial release leading to a non-existent advertising campaign that drastically affected revenue. Debuting with a minimal dent in the box office of $177,000, Heathers only grossed $1.1M during its theatrical run, which is a little over half the budget. It was only until its release on VHS it gained a cult following and the recognition it still enjoys today.

Ushering in a new kind of cult cinema for Generation X, traces of Heathers can be seen in films Empire Records (1995) Clueless (1995), and Waters’ brother’s productions of Freaky Friday (2003) and Mean Girls (2004). Although the language is slightly outdated and unconventional by today’s standards, there are quotes aplenty. Some of the subject matter may be a little sensitive for modern audiences and, due to the rise of US high school shootings, it’s difficult to envision a movie like Heathers being made today. However, this is part of the reason it remains a cult classic with timeless qualities that’ll resonate with both the youth of today and many generations to come.