What stops me joining the cult of Re-Animator is how reductive the franchise is. Stuart Gordon’s original 1985 movie is a schlocky update of a 1921 novella by H.P Lovecraft—entitled Herbert West—Reanimator—widely regarded as the author’s worst effort. A lame parody of Mary Shelley’s trailblazing Frankenstein, Lovecraft himself admitted he only wrote it for the money. And then there’s the saga’s earworm theme song by Richard Band, which is just a tweaked version of Bernard Herrmann’s iconic Psycho theme, so the whole enterprise feels like it’s standing on the shoulders of giants. That’s a precarious place to be, and I much prefer horror to be original and have fresher things to say. I can never quite shake the feeling that watching James Whale’s Bride of Frankenstein and Alfred Hitchcock’s Psycho would be a more productive use of my time.

However, that’s not to say Brian Yuzna’s Bride of Re-Animator doesn’t have its own strengths and peculiar pleasures. For the uninitiated, this sequel continues the ghoulish exploits of amoral scientist Dr. Herbert West (Jeffrey Combs), who’s struggling to perfect a luminous green serum that can bring dead things back to life. This previously resulted in a zombie outbreak at West’s workplace, the Miskatonic University—most famously with him dealing with the talking decapitated head of his boss, Dr. Hill (David Gale). And this zaniness continues in Bride, and then some. 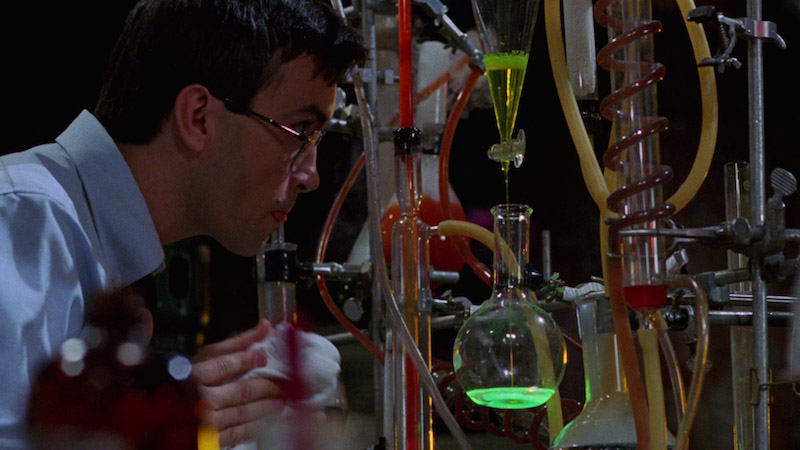 It’s been eight months since the events of Re-Animator, and we now find West and his colleague Dr. Dan Cain (Bruce Abbott) working as medics during the Peruvian civil war—which is perfect cover for experimentation with vials of ‘reagent’. After returning to the US, West soon hatches a plan to re-animate the heart of Cain’s dead fiancé Megan Halsey (Mary Sheldon), which will be housed within an assortment of body parts that eventually include the head of a beautiful patient called Gloria (Kathleen Kinmont). Added chaos is provided by an on-going investigation into the earlier ‘Miskatonic Massacre’ by Lt. Chapham (Claude Earl Jones), whose wife was transformed into a zombie during the mayhem, and who blames West and Cain for the tragedy. Dr. Wilbur Graves (Mel Stewart) also complicates matters, after he discovers a missing vial of glowing reagent amongst evidence stored from the Massacre, and uses it to bring the aggrieved Dr. Hill’s head back to life once more.

One of the biggest problems with Bride of Re-Animator is there are far too many competing subplots, each vying for attention, and they don’t come together in a cohesive manner. As seems evident from an interview with the director in the Special Features of Arrow Video’s new Blu-Ray, it seems the problem stemmed from the writers having limited time to cobble a screenplay together that could justify a whole movie—despite the crutch of loosely adapting the last two instalments of Lovecraft’s own story. They simply got carried away and overburdened what needed to be a more streamlined idea, given the preconceptions that come with the title, and it’s a shame this story pulls in several directions—ultimately falling apart, like its Bride character. 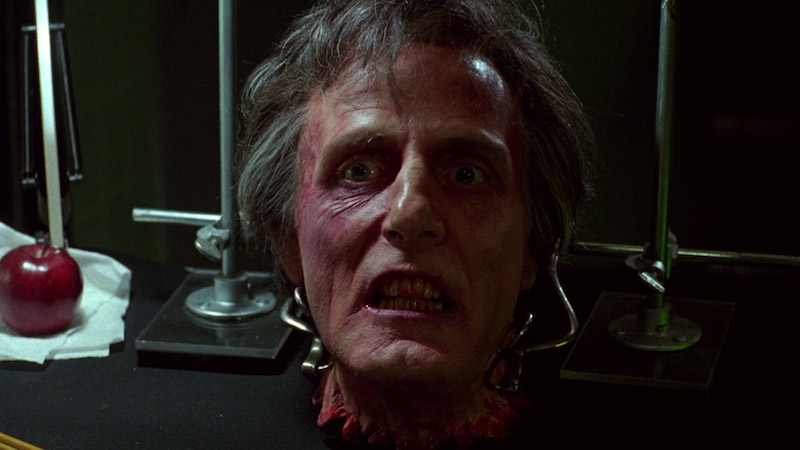 If more time had been spent on the core dilemma of a normal doctor like Cain having to work with a madman like West, who’s nevertheless a genius close to safely reversing the effects of death, Bride would have been a much cleaner, neater film. And the emotions should really been a lot sharper and nastier, as it boils down to West playing God with his friend’s dead fiancé, and ultimately turning her into an undead monster for selfish reasons.

Bride of Re-Animator works foremost on a visual level, for anyone who loves the schlocky make-up and practical effects of the 1980s, before CGI came to dominate the industry. And the great thing with this movie is you have a lot of the era’s most famous make-up artists involved, each toiling on different aspects of the film to share the burden of its workload—from Screaming Mad George (Predator, A Nightmare on Elm Street 3) to Robert Kurtzman (Evil Dead II, Tremors). You even catch a glimpse of Greg Nicotero during the disc’s extra features; now best-known as the guy behind the effects on The Walking Dead. 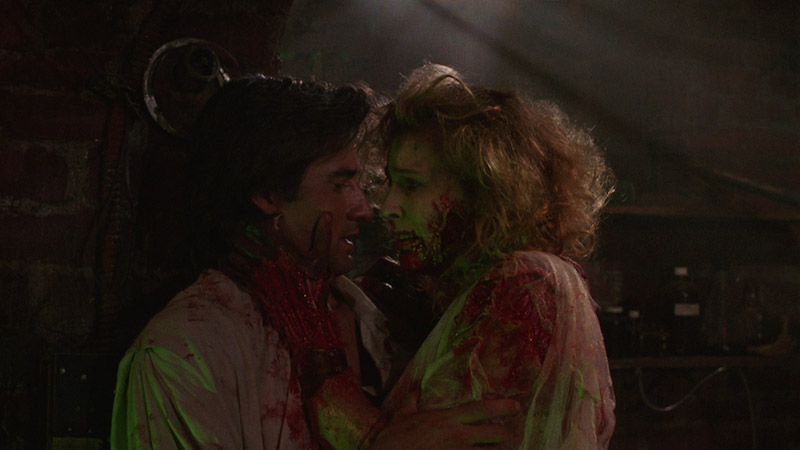 The effects are certainly a big reason to watch Bride of Re-Animator, and they get progressively more inventive and enjoyable as the film unspools. Things can look a little chintzy to modern eyes accustomed to the photo-real textures of CGI, but there’s still something to be said for the sensation of watching a physical trick at work in-camera. Even better, the lighting of the movie feels indebted to 1960s Hammer Horror, as it’s rarely cloaked in too much darkness, which means the effects have fewer places to hide. Alas, some of the compositing (certainly with Dr Hill’s floating head, grafted to bat wings for the finale) can look pretty bad, but I was surprised by how many sequences and shots had me marvelling at how they’d achieved it without digital assistance.

Jeffrey Combs is another solid reason to give the disc a spin. Unarguably a bigger cult than the Re-Animator movies themselves, with an extensive list of sci-fi/horror credits to his name, Herbert West remains his signature role—no matter the sliding quality of the three movies themselves. Combs has a way of keeping your attention whenever he’s on screen—it’s something to do with the odd cadence of his voice, his geeky-yet-handsome features, plus a commitment to delivering a fun performance no matter how weak the material. He simply gives it his all, and my only frustration with that is the scriptwriters should’ve realised this and raised their game—although I guess he wasn’t such a cult commodity back in the late-’80s.

There’s really nothing in Bride of Re-Animator that the first film didn’t already cover. It’s just more of the same, with slightly better make-up effects and a stronger finale when all of West’s “rejects” converge on his basement to tear it apart as the eponymous Bride is resurrected. In some ways I enjoyed this sequel more than the original, and can imagine people preferring it if they see it before Gordon’s original, but there’s no denying its main strength is the more-is-more mentality driving the inventiveness of its patchwork aberrations.