Laziness is how we get films like Pixels. The desperately sad lack of commitment on display here is astounding, as Adam Sandler and cohorts barely even attempt to string together a film that could pretend to be entertaining. It’s the new frontrunner for the worst film of 2015, providing us with unfunny broad humour (that’s as racist as it is misogynistic), the most basic character stereotypes, and just about the least-surprising or engaging plot imaginable.

The story is that of three friends and their shared love of video games. A devotion to gaming turns out to be vitally important when the world’s attacked by aliens mimicking the arcade games they used to play as kids back in the 1980s. Despite taking place in the present day, we first meet the two main characters, gaming whizz Sam Brenner (Sandler) and his best friend Will Cooper (Kevin James), as 13-year-olds competing at the 1982 arcade game world championships.

While there, they meet the socially-inept Ludlow Lamonsoff (Josh Gad), who’s there for no other reason than the fact that he turns up later in the story. So, things don’t go perfectly for Brenner in the final round of the competition. We’re told that the gaming prodigy’s loss in the championships—to Eddie Plant (Peter Dinklage)—is something that prevented him from fulfilling his potential and becoming a genius. When we catch up with the characters as adults, Brenner’s helping install TVs, while Cooper’s the President of the United States and Lamonsoff has become a conspiracy theorist. 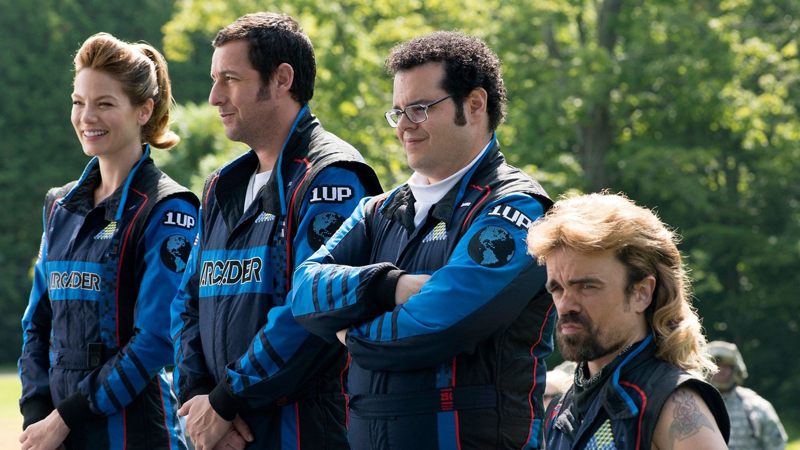 The concept may seem unusual and bizarre, but there’s little about Pixels that is truly original. So many of the moments focusing on this unlikely team brought together to save the world feels copied straight from Armageddon; while the action when fighting the aliens feels eerily similar to brawls from the Transformers movies, or the attack at the end of The Avengers. Some may find praise for the visual effects here, but even they seem like a rushed job. The only distinct visual quirk is watching real objects and people transform into cubed pixels, but the movie just repeats that effect over and over again into tedium.

For a film that tries to be about learning the rules and seeing the patterns in classic arcade games, there’s a scarcity of logic to Pixels itself. Unlike the games it’s indebted to, it’s happy to write and re-write its own rules as it goes along, so that the plot can follow a predictable journey without having to challenge itself to operate within narrative constrictions. Why exactly the aliens are so keen on fair challenges against us is explained, until it’s suddenly ignored. The same can be said for how the aliens behave, or how the characters are constantly sweeping important developments under the rug when it’s convenient to. This plot is utter rubbish, designed only for the delivery of man-child comedy full of atrocious one-liners and dull set-pieces.

Part of the reason this is a disappointment is that a good number of talented people are involved. That central trio have had hits and misses, but this is a film that stars Game of Thrones‘ Peter Dinklage, along with Michelle Monaghan and Brian Cox. It’s such a shame to report that nobody comes out of this film looking good.

Pixels treats everybody in its story with disdain. It may feature nerdy characters as its leads, but it uses them the same way The Big Bang Theory has been known to; by downplaying all the cool eccentricities of nerd culture and playing up the worst and most offensive parts. These guys are quick with a joke aimed at women or minorities, but they’re also socially-challenged and geeky enough that the film devotes a lot of time to laughing at how sad they are in a very mean-spirited way. Furthermore, Pixels portrays the military’s elite as a collection of dumb lunkheads and even points its finger to laugh at other cultures like Britain, India, and Japan in the most stereotypical of ways. 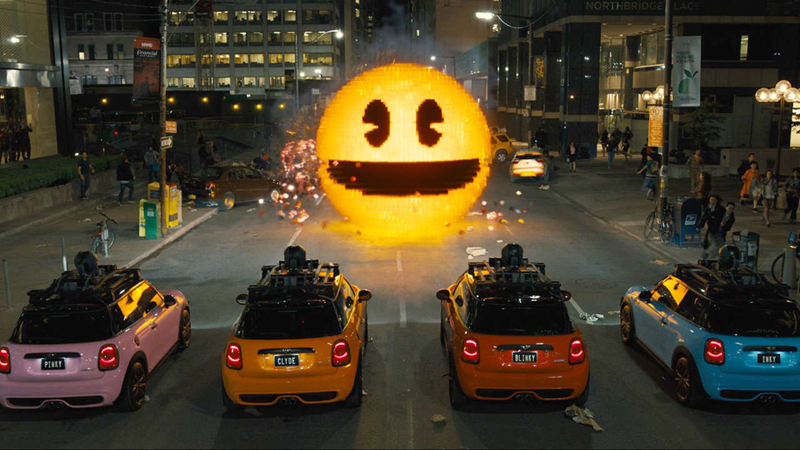 Of all the reasons to suggest you avoid Pixels, though, its vile attitude towards women is the most compelling. Misogyny is at the heart of what this movie’s about. Within moments of meeting our competent female lead, Lieutenant Colonel Violet van Patten (Monaghan), she’s breaking down in tears so that our male hero can have the most awkwardly inappropriate meet-cute. Every female character here is sidelined, sexualised, or to be laughed at, without exception.

This is a film in which there are not one but two women without a single line of dialogue, who end up being used by the screenplay as rewards for the men. One is quite literally a “trophy” won in the game’s closing scenes. There is an abundance of damaging stereotyping going on here, and the way it seeks to hit comedic notes with lines referencing “slut-seeking missiles” and “girl maggots” (apparently the film thinks this is more degrading than just simply “maggots”) is something that should make all moviegoers uncomfortable. It feels like the type of film that might have been a hit back in the ’90s when Sandler’s schtick and this kind of broad humour was more widely appreciated. Times, thankfully, have changed.

It’s hard to shake the feeling that, somewhere within this repugnant piece of filmmaking, there’s at least part of a good idea. The concept could be original if it was handled with care and genuine respect for the nostalgia it’s attempting to benefit from. But it was not to be. Pixels is a sloppy attempt at making these ideas work, and one that barely managed to elicit any real humour, create some lively action, or develop a deeper meaning. It’s a drab, stupid film with nothing of any substance to offer. Game over.

writers: Tim Herlihy & Timothy Dowling (based on a story by Tim Herlihy, and the short film Pixels by Patrick Jean)