We’re two episodes into Hannibal‘s version of Thomas Harris’ Red Dragon and, so far, the biggest surprise is how faithful an adaptation it’s been. Opening where last week’s episode left off, with Hannibal Lecter (Mads Mikkelsen) and Will Graham (Hugh Dancy) reunited after three years, it’s surprisingly close to the structure of the same scene in the book—even going so far as to lift lines of dialogue verbatim. The effect is enjoyably disorienting, as seeing this encounter (familiar to fans of the book or Manhunter) reinterpreted in the context of this Hannibal and this Will, as we know them, gives familiar moments new shades of meaning.

When Hannibal observes “that’s the same atrocious aftershave you wore in court”, in previous versions of this scene it’s Lecter’s attempt to prod Will for details about his personal life, to make him feel vulnerable. The same is true here, but it’s also more than that. As their conversation progresses and Hannibal explains how the need for family is central to the Tooth Fairy’s crimes, he’s also talking about Will, their relationship, and the makeshift family they briefly shared with Abigail (Kacey Rohl). At one point, Hannibal makes this connection explicit: referring to Francis Dolarhyde (Richard Armitage), he says, “like you, Will, he needs a family to escape what’s inside him.” Whether Hannibal is correct remains to be seen; Will truly doesn’t seem to need Hannibal the way he did in the past, and the charming scene where Will and Molly (Nina Arianda) flirt gives hope that he’ll be able to return to the normal, happy family life he’s made for himself. On the other hand, the bad dream of himself covered in blood after murdering Molly is disconcerting. 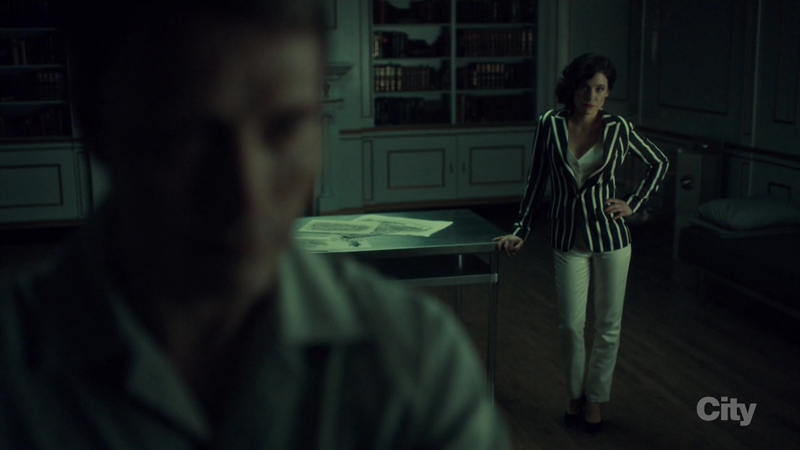 The theme of family is echoed throughout the episode, with flashbacks both to Dolarhyde’s childhood and scenes between Hannibal and Abigail Hobbs that were previously implied but left unseen. Admittedly, I found those scenes frustrating. It’s fun to watch Rohl and Mikkelsen play off each other, and I appreciate how the dark father/daughter aspect of their relationship echoes the chilling final moments of the hour, where Hannibal receives a phone call from Dolarhyde and, presumably, is about to begin mentoring the budding serial killer.

Outside of that, though, the scenes between Abigail didn’t tell us anything that wasn’t already heavily implied and, as much as I like both actors, I found my attention straying. They highlighted the one major potential pitfall of Hannibal‘s approach to Red Dragon—which was also one of the major problems with the Anthony Hopkins-starring movie—that Hannibal being the “main attraction” prompts the writers to retroactively tilt the narrative towards the character in a story that, frankly, just doesn’t need him. I’m hopeful, though, that this was simply a case of underlining a thematic parallel just a little too heavily. 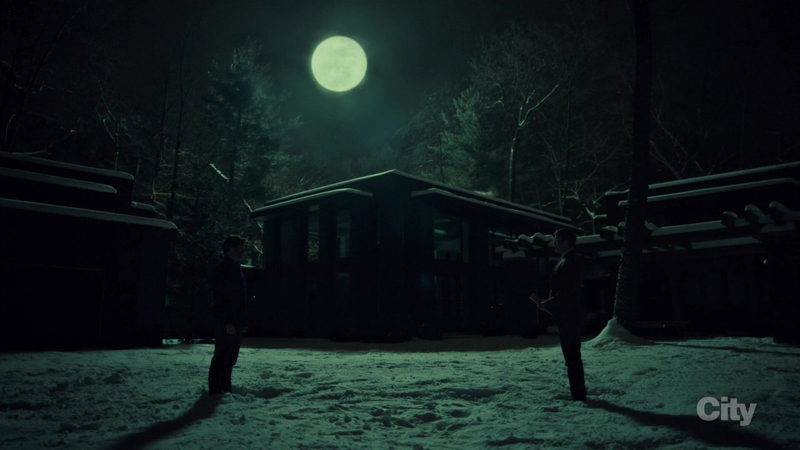 Thankfully, the episode also introduces one of the book’s most important characters, Reba McClane (Rutina Wesley), Dolarhyde’s co-worker at a film processing plant (which reminded me—I’m interested to see how the show is going to deal with, or update, the way ’80s film and video technology plays into the plot). As the plot unfolds, Dolarhyde is revealed as something of a tragic character, and Reba plays a big part in this. I’m really liking Wesley’s performance and the off-balance chemistry between her and Armitage (“ride with me… for my pleasure”) so far, and I appreciate that they’ve kept Reba, who is blind, as assertive and resistant to patronising sympathy as she is in the book. I liked Joan Allen’s and Emily Watson’s performances as Reba in their respective films, but her narrative thread is one of the few that Manhunter, as great as it is, fumbled. And one of the worst things about the 2002 Red Dragon is that both Watson and Ralph Fiennes are giving performances meant for a smarter and more complex movie than Brett Ratner is capable of making. Hannibal has an opportunity to finally get perhaps the most moving and memorable aspect of Harris’ book right, and it’s off to a great start.

So while “And the Woman Clothed With the Sun…” is uncharacteristically uneven and stylistically restrained for Hannibal, it’s possible that, with as much time as it spends emphasising the theme of family (I half-expected Vin Diesel to pop his head into a shot and mumble “family.”), it’ll seem stronger in retrospect once we’ve seen the story fully unfold. And there were still plenty of great moments throughout. It’s fun to see Alana Bloom (Caroline Dhavernas) in the Dr Chilton role, as she’s a far worthier antagonist for Lecter (even if it seems inevitable she’s going to get offed before this season’s over). And we finally saw the return of sleazy journalist Freddie Lounds (Lara Jean Chorostecki), perhaps the biggest wild card for the rest of the season—as season two already used her fate in Red Dragon as a fake-out, so how her story plays out here is anyone’s guess. Plus, her scene with Will gave episode writers Jeff Vlang, Helen Shang, Bryan Fuller and Steve Lightfoot the chance to have Dancy actually utter the phrase “murder husbands.” Between that and the “finger-wagging” bit between Hannibal and Alana, I’m glad Hannibal hasn’t lost its adolescent sense of humour.