Episode 4 is another packed instalment that leaps from subplot to subplot but, considering the title, it lacks something of the energy that kept the equally fragmentary “Travelers” driving along. Trade minister Tagomi (Cary-Hiroyuki Tagawa) has disappeared from his office. He finds himself in a very different world; one full of light and cherry blossoms and a deceased wife miraculously returned from his own reality’s bleak afterlife. But just as he’s about to meet her, he closes his eyes and is back in the noir nightmare of his own San Francisco.

Meanwhile, Helen Smith (Chelah Horsdal) keenly feels the death of Dr. Adler. Brought to life in a wonderful performance from Horsdal, Mrs. Smith is slowly getting more to do as this series continues. As she comforts the distraught Mrs. Adler, she connects the dots and confronts Smith (Rufus Sewell) in one of episode’s tenser moments. She also learns that an incurable degenerative disease will debilitate her son Thomas (Quinn Lord) and that her husband will do anything, even defying the Nazi code of purity, to protect him. Once again, The Man in the High Castle tests the viewer’s resolve and forces us to ask if it is possible to sympathise with a family grown rich on the privileges of fascism. 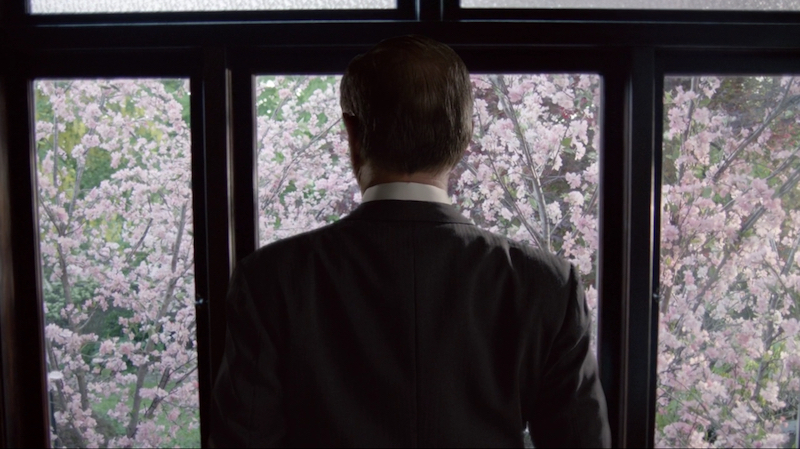 But these two strands are scattered within major developments for Juliana (Alexa Davalos) and Frank (Rupert Evans). Juliana, now Julia Mills, visits the Smith household and meets their son Thomas who helps her with her Reich citizenship test. Even she notices the effects of his encroaching muscular dystrophy as they share milk and cookies. The very fact she picks up on this seems to suggest that Smith may use her as a bargaining chip for his son’s life down the line.

Juliana has other things on her mind and begins a search for the elusive George Dixon last seen in the family album and the nightmarish film shown to her by Abendsen. In her pursuit she is recognised at a train station and the episode shifts briefly out of cruise mode to a very briskly shot and edited chase sequence as Juliana attempts to elude her pursuers. Dixon (Tate Donovan) eventually calls her from a phone box across the street and arranges to meet her. 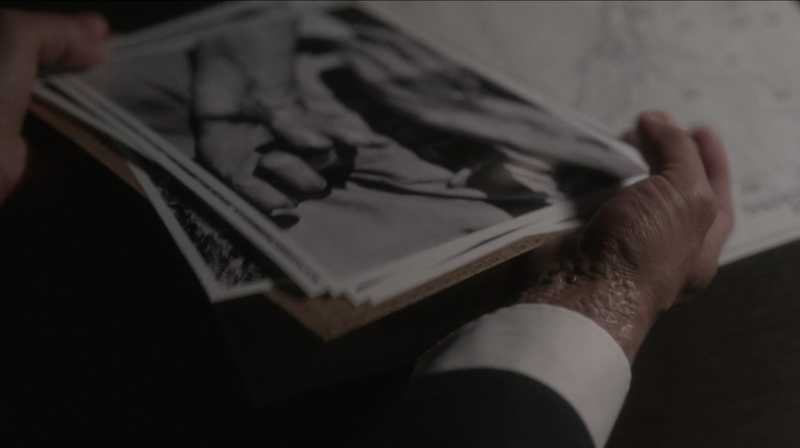 Frank Frink, riding high on his association with the Resistance, sidelines his confederates Childan (Brennan Brown) and Ed (D.J Qualls). There’s a growing sense they’re becoming less important to the show, and that’s a sham, as both characters provide necessary colour to the sombre proceedings. Their debt to the Yakuza seems an irrelevance now as Frank’s embroiled in the audacious plot to steal explosive materials from an unexploded bomb being guarded by the Japanese. This sounds more exciting than it is, however, and where there should be an escalation in tension as Frank and Ed use their skills to drill into the bomb the drama seems more interested in tension of another kind boiling up between Frank and Sarah (Cara Mitsuko). Flushed with their success, it’s not long before predictably they end up tearing off each other’s clothes.

Tagomi makes one last desperate plea to General Onada (Tzi Ma) about the dangers of his plan to transport radioactive material on public transport, but his protests are dismissed. There are also references to what look like radiation scars on the wrists of Tagomi’s assistant Kotomichi, a bit of an oddball character appearing throughout the series. Perhaps, it’s suggesting that Kotomichi (Arnold Chun) is also capable of sliding between multiverses and acquired his scars in a reality where a nuclear device was detonated in the city? This elevates the very basic principles of the original book but it also implies we might end up with a version of Sliders or Fringe as major characters jump across realities to try and alter them to fit the views of the various movies that Abendsen has retrieved and circulated. 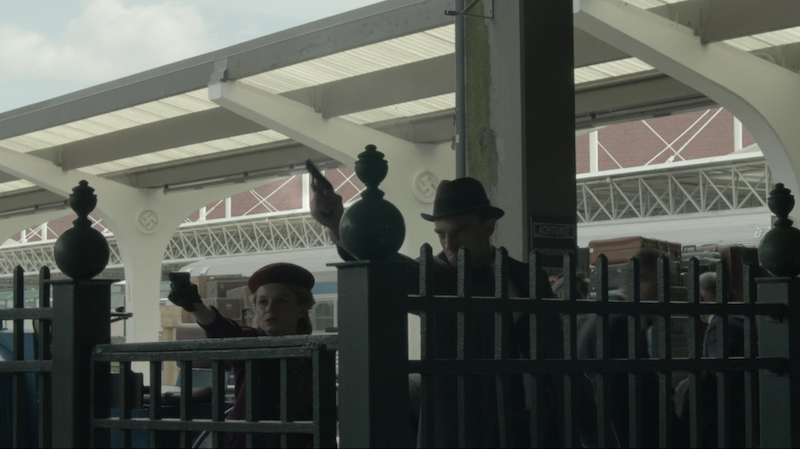 Meanwhile, Kido (Joel de la Fuente) also needs Onada’s approval of an executive order but he’s much more canny than Tagomi and instead takes the General out for drinks. He gets him drunk enough to sign any piece of paper thrust under his nose and, like the cat that got the cream, he pockets the approved order.

The least thrilling subplot involves, you guessed it, Joe (Luke Kleintank). He’s still in Berlin. He’s still throwing tantrums about his father’s behaviour and threatening to go home to New York. I’m pretty sure the audience doesn’t care about this character now, because the writer’s are yet to work out what to do with him and how to connect him into the rest of the story. Watch this space… 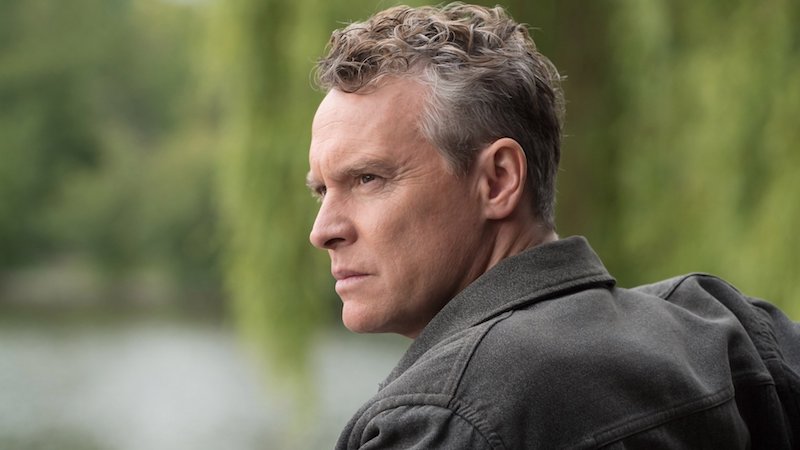 The fifth episode, unfortunately, returns us to the glacial pacing of the first season. It feels like a placeholder episode and, while it similarly switches between each of the subplots, it lacks the real energy to keep us invested in its story. However, this episode signals executive producer and developer Frank Spotnitz’s departure from The Man in the High Castle, and there’s already evidence of restructuring the series around Tagomi, Juliana, the titular occupant of the High Castle, and of a major, long overdue development for Joe.

We open with Tagomi again. He’s in the alternate reality we glimpsed in the last episode, but this time he’s sharing it with his wife Michiko (Yukari Komatsu), the Cuban Missile Crisis, bomb protests, Twinkies and, more somberly, history books about the bombing of Hiroshima and Nagasaki. He’s not sure he likes this reality compared to his own. Startlingly, as the episode draws to a close he meets his son, equally perturbed at his father’s sudden reappearance after his “benders”. But where is the Tagomi of this reality? 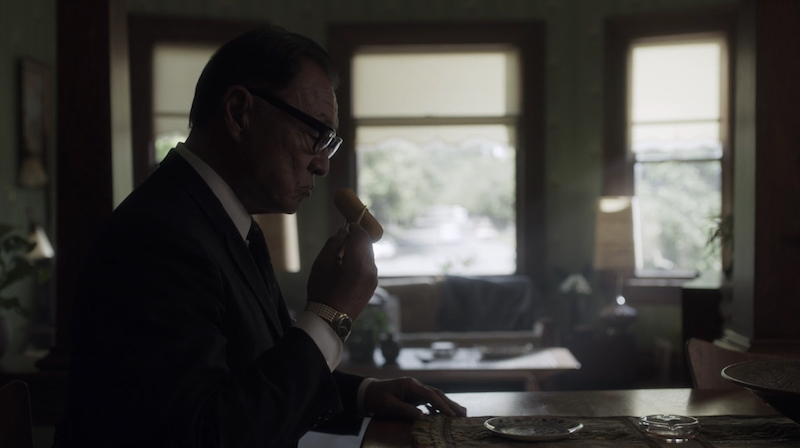 A final shocking revelation, which seems to confirm the direction the series is heading for, is the appearance of Juliana, here in this reality as his son’s wife and cradling a baby. It’s an absurd Dallas-like moment but, given they’ve exhausted everything in the original book, the interplay of alternate realities has to be the showrunners’ major selling point going forward. No wonder Tagomi was obsessed with Juliana in the other reality–they’re related.

Back in Berlin, Joe is taken to a birther house by his father Heusmann (Sebastian Roché), who’s determined to tell him the truth about his parentage. These establishments link to Nazi social policies, their connections with eugenics, and where the higher echelons of the Reich could procreate with racially perfect women. It’s a chilling reminder of Heinrich Himmler’s Lebensborn Society, which set out to promote an Aryan future for the Third Reich and turn around a declining birth rate in Germany. People were given incentives to have more children in the Fatherland as well as in occupied countries, most importantly in Scandinavia. 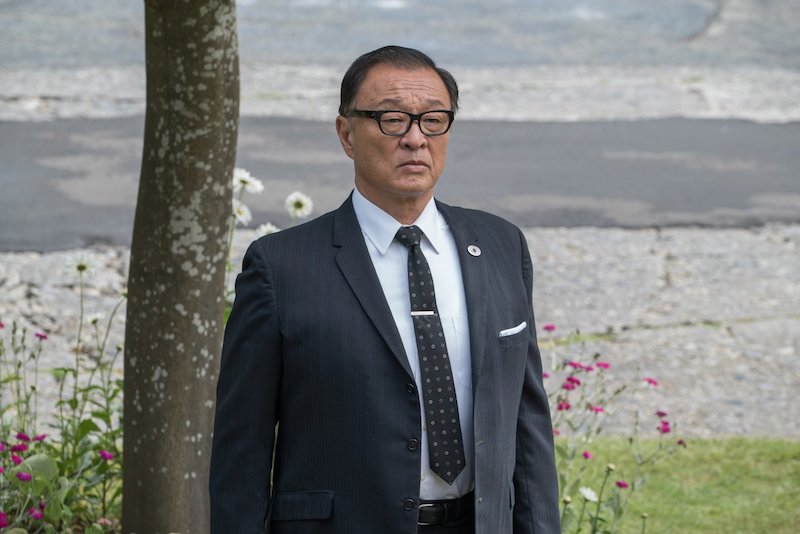 Joe is the product of such a project, and was destined to be groomed by the SS elite before he was kidnapped and taken to Brooklyn.  How effective Joe’s breakdown at this news is depends on how strong a performance you think Luke Kleintank provides as he gazes over the abandoned nurseries. It’s perhaps overworked, exposes his ‘acting’, and doesn’t properly sell the overwhelming, shocking truth of Joe’s birth. That Joe gets on the phone to Smith and resigns for probably the third time from the Reich’s employ again demonstrates a character who pulls his punches, prevaricates, continues to carry out threats, but doesn’t. Still, it remains to be seen what happens to Joe in the second half of the season given this development.

The other major revelation is Lem’s (Rick Worthy) visit to Abendsen (Stephen Root). “Nothing like a good spring cleaning,” Abendsen remarks as he tosses a match to his entire High Castle storage of films, saving only a handful and what he has locked in his head for the future. We even see the key film The Grasshopper Lies Heavy burn up as he and Lem drive away into the night. Symbolically, this may be the showrunners saying, ‘all that chasing after films in the first season? Now irrelevant.’ You do start to wonder what is the point of the calling the series “The Man in the High Castle” as its ‘Man’ drives way from the inferno of his ‘castle’. 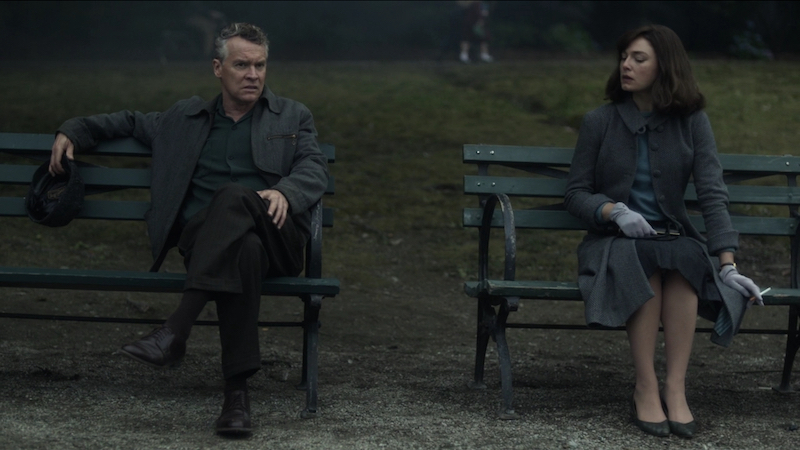 Juliana does meet with George Dixon, but her explanation that she’s seen him present in the one film that does not end with a nuclear holocaust leaves him as nonplussed as the rest of us. However, he’s more concerned about her relationship with John Smith and suggests that if she wants the Resistance to stop trying to kill her she should use this relationship to her advantage and do a little spying for them.

Meanwhile, as Frank is swallowed up by the Resistance, his friend Ed is visited by the Kempeitai and is forced to spy on Frank and recount their dealings with the Yazuka. We also learn that Kido’s order was for the extradition of Juliana back to San Francisco. Although John Smith confirms she has been offered asylum when Kido arrives in New York to meet him, Kido drops in the fact that she has met the Man in the High Castle and Smith starts to reevaluate Juliana’s role and her worth to him.

Lots of twists and turns, but at the halfway point in season 2 its still not clear where this is all going. A lot of the baggage of the first season is slowly jettisoned in “Duck and Cover” and I fear there’s more culling to come as The Man in the High Castle transitions to its new showrunners for the recently announced third season. Start placing your bets on which characters survive the impending devastation…