It’s hard to imagine there’ll be a film this year as inventive and audacious as Pixar’s newest offering Inside Out. That might seem like a bold statement, but consider the facts: this film, ostensibly aimed at children, eschews loveable toys and superheroes to take place almost entirely in the mind of an 11-year-old girl named Riley (how I love the scriptwriting team for making an oblique Life of Riley joke), and what a mind it is…

Riley (voiced by Kaitlyn Dias) has spent the early years of her life happily living with her parents (Kyle Maclachlan and Diane Lane) in Minnesota. She’s a happy-go-lucky kid who enjoys playing hockey, hanging out with her best friend, and creating mischief. Her life up until now has been joy-filled—and that, it turns out, is intentional. For inside Riley’s head (as with everyone else in the film) live five primary emotions—Joy, Sadness, Disgust, Anger and Fear—pulling a complex series of levers and buttons to ensure Riley stays on an even keel while also burnishing her ‘core memories’. Those moments, Joy explains, that ‘make Riley Riley’.

Perennially perky Joy (Amy Poehler) is the leader of Riley’s brains-trust; dedicating her time to ensuring happy memories, while keeping the droopy pullover-wearing Sadness (Phyllis Smith) at bay. “There Sadness, you stay there in your circle of sadness,” she remarks at one point—and you can see the hint of the steel of behind Joy’s delightful front. 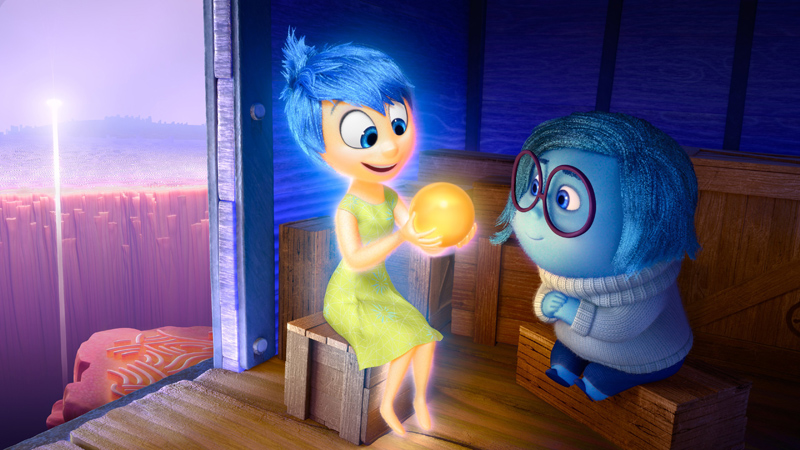 And this is where Inside Out, which was five years in the making, truly comes into its own. The idea of a little team inside your brain isn’t new—long-running Beano comic strip The Numskulls first used a similar idea back in 1962—but Inside Out‘s concerns are more far-reaching. Pixar animations can generally be divided into two types: the straight-out audience-pleasers with their talking cars and wild adventures; and the more complicated, quirky films, such as the near-silent WALL-E or the quietly melancholy Up. And this is most definitely in the latter camp. Put simply, it’s a story about growing up, about what happens as we get older and how our emotions change as we move through the world. It’s also a glorious psychedelic swirl of a film, which combines a serious message with clever animation and witty touches; not to mention a quest that every viewer, young or old, can get behind.

For Riley, the problems begin when her parents decide to relocate to San Francisco. Suddenly everything is very different. There are new stresses—a horrible new house, a daunting new school—but her parents are wrapped up in problems of their own, so fail to notice that their cheery daughter is homesick and feeling isolated. The issue is compounded when an incident in Riley’s brain control room sees Joy and Sadness sucked out into the vast outer reaches of their host’s brain and forced to begin a long, complicated journey back to their home. 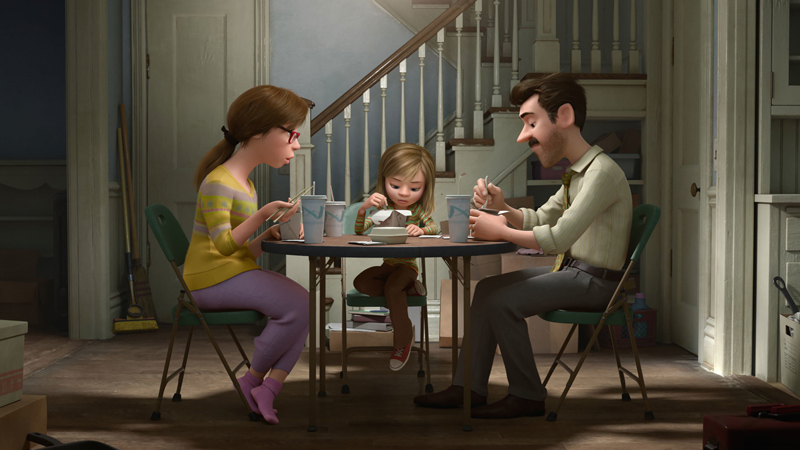 Mismatched buddy movies, which this is in many ways, are nothing new—but again, what delights is the playful inventiveness with which Inside Out tackles the trope; taking us on a wild ride through Abstract Thought, The Dream Factory and the Imagination Playground, in which Joy slowly begins to realise that maybe, just maybe, she isn’t the only important emotion in Riley’s world.

Meanwhile, back at HQ, the abandoned trio of Anger (Lewis Black), Disgust (Mindy Kaling) and Fear (Bill Hader) are slowly making a bad situation worse; their well-meaning attempts to keep Riley on an even-keel instead setting off a downward spiral and bringing core memories crashing to earth.

This then is Inside Out‘s central message: we all change as we get older. Once-cherished companions such Riley’s imaginary friend Bing Bong (Richard Kind) slowly fade from memory, new enthusiasms edge out the old, and our emotions are no longer as straight-forward as once appeared. Most of all, this wise and witty film informs us that no one needs to put on a perky face for every second of the day. We might want everyone to think we’re filled with joy, but sadness has its place too. It might be difficult and hard to cope with, but sometimes it’s the one emotion you truly need.