After last week’s somewhat frustrating episode, it was good to find Hannibal back on track with “And the Woman Clothed in Sun,” which narrows its focus to one of the most fascinating aspects of Red Dragon—the relationship between Francis Dolarhyde (Richard Armitage) and Reba McClane (Rutina Wesley)—while also devoting a few scenes to one of the show’s most interesting characters, Bedelia du Maurier (Gillian Anderson); finally filling in the blanks of her backstory in a fascinating way that doesn’t overwhelm the Red Dragon story the way last week’s Abigail-centric flashbacks did. If the last episode showed some signs of strain in conforming the Red Dragon narrative to the show’s universe, the script for this one, by Don Mancini and Bryan Fuller, worked wonderfully both as an adaptation and as its own thing.

The doomed Beauty and the Beast love affair between Francis and Reba, which Fuller has introduced sooner in the narrative than the book did, is clearly one of the showrunner’s main areas of fascination with the story, and for good reason. Few stories of this kind have played with our sympathies as effectively as Harris’ book did—we learn about the Tooth Fairy through his horrible crimes, and, expecting a monster, we’re instead introduced to a sad, broken human being worthy of our pity, if not our sympathy. Fuller seems to be further playing on our conflicted response to Dolarhyde by introducing his affair with Reba before getting to what serves, in the book, as a much more fearful introduction to the character. I won’t spoil it here, but it involves one of the show’s regulars, and the ways that Hannibal has jumbled Red Dragon‘s chronology makes me wonder how they’ll deal with it—or if, perhaps, the show will surprise us with something completely different. 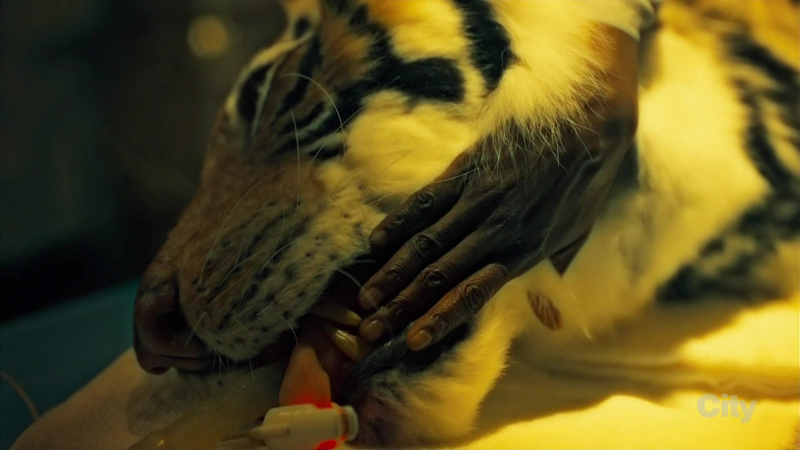 Vague speculation aside, the scenes between Francis and Reba are touching in ways that are, to say the least, complicated by what we already know about “Mr. D.” The episode’s highlight was a scene taken from the book, where Francis takes Reba to the zoo, where a tiger’s been anaesthetised for a surgical procedure; Francis wants her to have the opportunity to touch the sleeping animal and “see” a tiger for the first time. It’s a great scene in the book because of the way it complicates our sympathies—by any standard, this is a genuinely awesome date, and it tells us that somewhere inside this poor tortured guy is a person capable of deep empathy and eloquence. But then we consider how the whole “tiger” thing ties in with his William Blake obsession and psychopathic megalomania and… yeah. Mr. D is a complicated man, is all I’m saying. 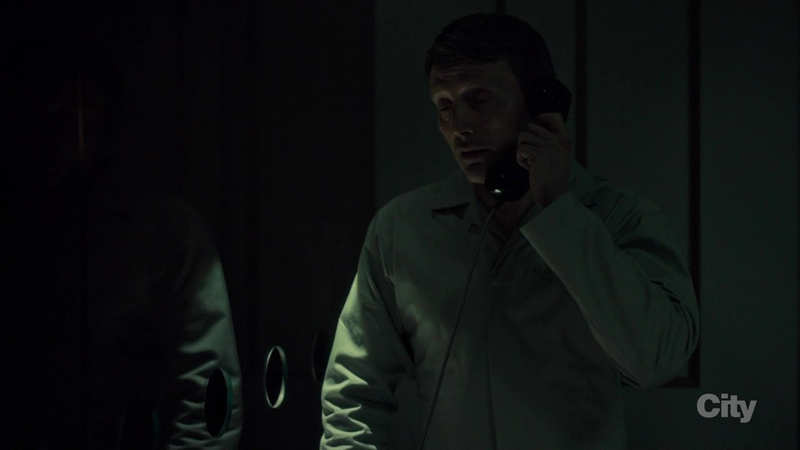 The complexity of our response to Dolarhyde is mirrored in the scenes between Will (Hugh Dancy) and Bedelia; Hannibal’s “brides” (as Bedelia puts it—I love how the show’s writers aren’t bothering to be subtle about this stuff now). We finally learn the full circumstances that led to Bedelia being indebted to Lecter; as it turns out, she didn’t kill her patient, Neal Frank (Zachary Quinto), in self-defence. It was a smart casting move to put Quinto in this role, as he’s played enough psychos that his brief appearance at the beginning of the season encouraged this assumption.

Actually, Neal is an innocent who, in a heated moment during a session, swallows his own tongue, and Bedelia impulsively decides to suffocate him by ramming her arm down his throat because, as she explains to Will, she disdains weakness and felt it was better to put Neal out of his misery than to save him.* As Hannibal referred Neal to Bedelia, this was apparently his attempt to nudge her towards the madness he saw in her, as he has with others. It’s a fascinating turn for a character whose motives have, until now, remained oblique—in a show filled with larger-than-life monsters, Bedelia has revealed herself, like the killer in The Vanishing, to be an otherwise ordinary, intelligent person who decided in a moment to do an evil thing because she could. It’s a chilling turn for the character, played brilliantly by Anderson.

Hannibal (Mads Mikkelsen) is mostly on the sidelines this hour, which makes his brief appearances much stronger. It’s proven to be a great choice to use Hannibal’s ‘memory palace’ to allow him to appear in scenes beyond the confines of the hospital. The opening dialogue between Hannibal and Francis, staged as if they were sitting opposite each other in Hannibal’s office, is mesmerising and, as Dolarhyde appears as the Great Red Dragon, kind of metal. The narrative also appears at one of the story’s most chilling turns, as Hannibal obtains Will’s home address (on her first day of training, Chilton’s secretary should have been warned that, if a suave guy with a silky eastern European accent calls claiming an associate of Chilton’s, hang up immediately). It’ll be interesting to see what twists, if any, Hannibal might take with this turn in the book’s story. I’m also curious about how the story might be affected, if at all, by adding that cliffhanger at the end—because, while Francis munching on the Blake painting to end the power it has over him, is in the book… having Will come face to face with him before Dolarhyde flees was a great way to close the episode. Even having read the book, I honestly have no idea how the last three episodes will wrap up this story, but I’ll be surprised if it proves to be a happy ending for anyone involved; I’m simultaneously dreading and anxiously awaiting seeing where this Red Dragon and, probably, the series (boo!) concludes.

*Fuller mentioned on Twitter that Bedelia’s line about wanting to kick a wounded bird rather than help it was something Jodie Foster said in an interview. Foster was one of my earliest crushes, and now I feel really weird about it.