“Let it be a fairy tale, then. Once upon a time…” And with that, we’re thrust back into the strange, gruesome, often beautiful world of Hannibal. What seemed on the surface to be a bad, desperate idea—a prequel series to a film franchise that had run out of steam—has proven to be the most surprising, thrilling and purely cinematic show on TV, network or otherwise. Showrunner Bryan Fuller has taken the mix of high art and grand guignol in Thomas Harris’ novels and run with it; the show’s haunting, atmospheric visuals and sound design, punctuated with perversely imaginative gory bits, make for a pleasurably unsettling viewing experience. The show is bound to be too disturbing for some, but for those of us who can cope with the freaky stuff, the show is as good as it gets.

“Antipasto” picks up shortly after the events of last season’s emotionally devastating finale, which saw Dr. Hannibal Lecter (Mads Mikkelsen) and his onetime patient and friend (soulmate?), FBI special agent Will Graham (Hugh Dancy), go through a bloody, protracted breakup that left the fates of Graham and most of the principal cast uncertain as Lecter escaped with his therapist, Dr. Bedelia Du Maurier (Gillian Anderson). The episode perversely withholds the answer to whether Graham, Jack Crawford (Laurence Fishburne) or Dr. Alana Bloom (Caroline Dhavernas) are dead or alive, focusing instead on Lecter’s new life in Europe and his complicated relationship with his “wife.” We’ve seen a version of these events in Harris’ novel Hannibal and its film adaptation, with Lecter assuming the identity of a professor he murdered and making a living in Florence. Fuller and the show’s writers have often taken familiar characters and scenarios from the books and placed them in a different context. When Lecter, while delivering a lecture on Dante, makes a gesture familiar from Ridley Scott’s movie but involving a completely different character, it’s at once a fun nod to those familiar with the source material and a signal that, unlike most prequels, knowing where this story ends up doesn’t mean we can confidently predict how it will get there. 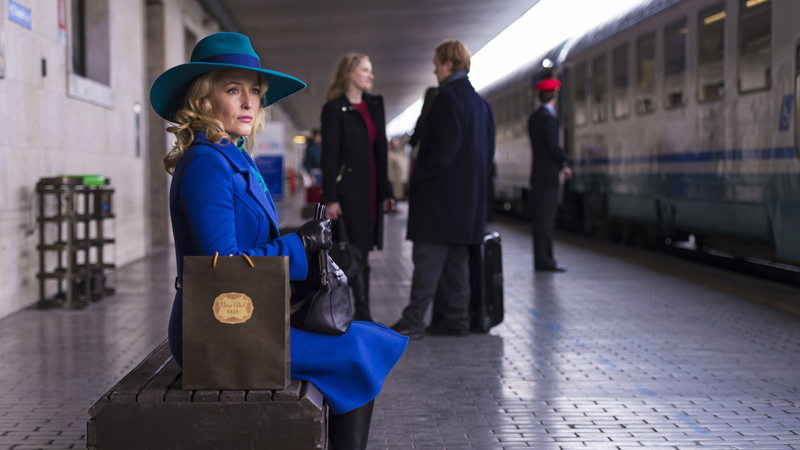 The episode’s focus on Hannibal and Bedelia gives Mikkelsen and, especially, Anderson a chance to shine. I’ve always enjoyed Anderson’s appearances on the show, but her character’s motives have always been deliberately unclear; this episode begins to put the pieces together via a flashback to the aftermath of the violent confrontation that left Bedelia indebted to Hannibal. Anderson is outstanding here; it’s not so hard to act terrified, but the power struggle between Bedelia and Hannibal requires the actress to play most of her scenes with her terror just barely concealed, which is far more challenging to convey as subtly and effectively as she does (kudos to episode director Vincenzo Natali for knowing just when to cut to a close-up of Bedelia’s trembling hand during a crucial dinner party scene).

As for Mikkelsen, he’s as unnerving (and unnervingly attractive, if I’m being honest) as ever as Dr. Lecter, and I’m excited to see what new dimensions of Lecter the actor will get to explore given that, as the doctor puts it, he’s “taken off my person suit.” From the opening shots of Lecter on a motorcycle, prowling the streets of Paris at night (the images reminiscent of last year’s Under the Skin), he’s a more ruthlessly efficient predator than we’ve ever seen. At the same time, the doctor is still nursing a broken heart from his split with Will; a chance meeting in Florence with a man (Tom Wisdom) he met in Paris suggests that Hannibal yearns for company before reminding that, for obvious reasons, it’s too great a risk. When asked on Twitter to sum up season 3 in a few words, Fuller responded “Breaking up is hard to do,” and I can’t wait to see how the aftermath Hannibal and Will’s breakup plays out.

The real pleasure of Hannibal, however, lies in how Fuller and the show’s writers and directors take full advantage of the medium. The transgressive, sensational nature of horror has always made it the genre that allows filmmakers the greatest thematic and aesthetic freedom, though it seems like most contemporary horror directors are content to stick with proven formulas. Thankfully, that’s never a problem with Hannibal, which is prone to expressionistic flourishes, unforgettably surreal images and little in-between moments—like the close-up in this episode of a drop of blood falling from the body of a freshly slaughtered rabbit—that serve no larger narrative purpose but exist only as bits of grim, portentous poetry. Thankfully, “Antipasto” shows no signs of the show becoming more restrained or tasteful. The episode is filled with great moments both bold—as with a cut from black and white (or, possibly, desaturated colour) to full colour and one aspect ratio to another—and subtle, as in the elegant manipulation of the depth of field during a pre-bathtime exchange between Hannibal and Bedelia. Hannibal isn’t only more cinematic than any other show on TV, it also gives most movies a run for their money. 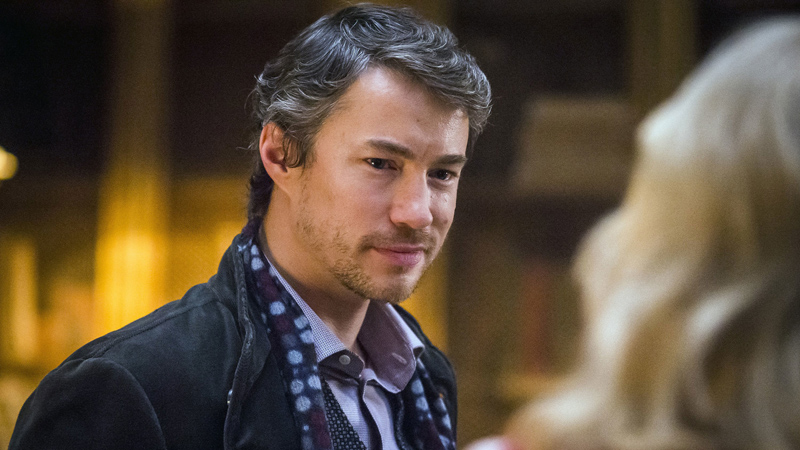 The move to Europe has also expanded the show’s opportunities for dreamlike imagery that draws from a long tradition of Eurohorror. While the production’s location shoot was brief, based on the evidence this episode gives us, they made the most of it. Patricia Highsmith is the obvious touchstone for a story of a killer abroad, and there’s a lot of Talented Mr. Ripley’s DNA in the episode. But there’s also a shot of Bedelia walking by the Duomo (the same building Lecter was sketching in his cell in The Silence of the Lambs) that reminds of the dark beauty of Nicolas Roeg’s Don’t Look Now (adapted from a story by Dr. Du Maurier’s namesake). There are other moments that feel straight out of a giallo, an influence that has extended to composer Brian Reitzell’s atmospheric score, which here incorporates new funky, Goblin-esque synth cues. It’s easy for a horror movie (or show) to reference other movies, but Fuller and episode co-writer Steve Lightfoot incorporate them into a coherent whole, adding to the texture of the series’ nightmarish world.

It remains to be seen where this season is headed and, if the first two seasons are any indication, it’d be futile to guess. As Hannibal is basically flirting with a guy about three minutes into the premiere, with the suggestion of a ménage à trois brought up later on, my fingers are crossed for lots more of the homoeroticism the show does so well and, possibly, a dash of Eurokink for good measure. As the flashback scenes in between Hannibal and one of his victims, fellow serial killer Dr. Gideon (Eddie Izzard), remind us, the good doctor’s European vacation is destined to end sooner or later, so I’m just hoping he has a lot of fun while it lasts. I’m looking forward to seeing where the season takes Bedelia (and Anderson), and to learn more about Zachary Quinto’s character, who we meet (very) briefly in “Antipasto”. Fuller has promised that this season will tackle the events of Red Dragon, my favourite of the books, and I can’t wait to see how it’s reimagined here. And, of course, I’m impatient as Fuller surely wants me to be to get to Hannibal and Will’s reunion. I’m looking forward to sharing my thoughts on the season here on Frame Rated, and I hope you’ll discuss it with me.

Oh, Hannibal, how I’ve missed you.