We’re still not quite at the turning point where Jimmy (Bob Odenkirk) becomes Saul, but every episode edges us closer. Although Jimmy’s not even a practicing lawyer at this moment in time, instead going for job interviews for management level positions. One of my favourite moments of “Breathe” was his interview for a photocopier salesman role, using his backstory as a mailroom employee to increase his chances, until his more recent past as a lawyer (with no evident salesman experience) seemed to dash his chances.

However, Jimmy just couldn’t take a polite ‘no’ without a little fight, drawing on his skills from even further back in time to hustle the interviewers into saying ‘yes’. And it was a marvellous scene, with Jimmy ironically giving the perfect sales pitch for himself as the ideal man for the job, talking about copiers as the beating heart of every business. The interviewers were completely sold on his “fancy words”, but in a wonderful twist Jimmy couldn’t take the job because they’d revealed themselves to be “suckers”. 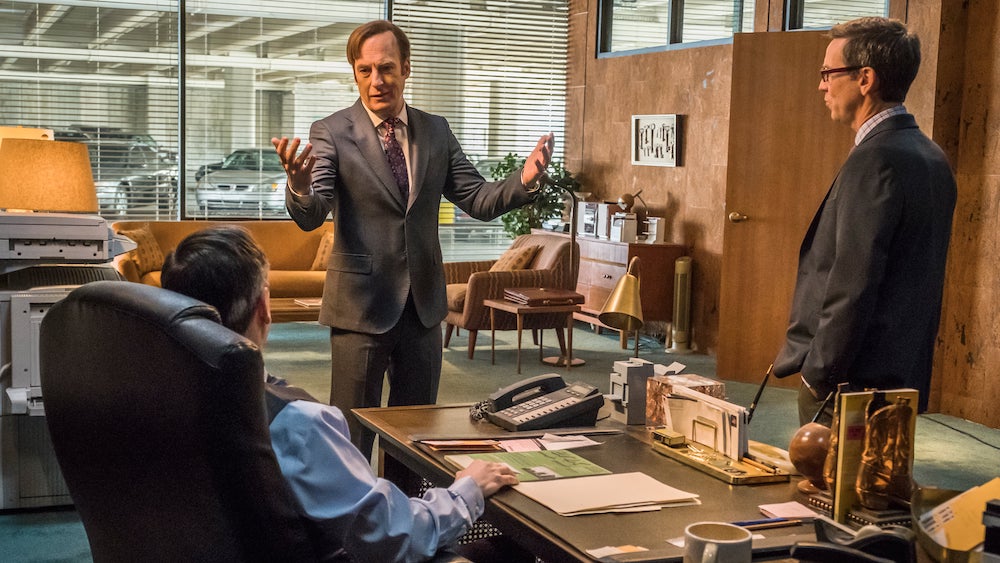 Or might thee be a little voice telling him being a copier salesman isn’t the right path for him, but he couldn’t pass up the chance to flex his conman muscles a little anyway? Or was the whole exercise a way for him to fail on his own terms, so maybe he’ll come to realise being your own boss is the way to go.

Intriguingly, the real value of the interview was Jimmy noticing some Hummel figurines displayed in the office, keepsakes of the company’s late founder, that Jimmy late-night Googles to reveal one’s worth $8,000. A quick phone call to Mike (Jonathan Banks) and it seems we have another of Better Call Saul’s smalltime criminal escapades to look forward to, which are always fun. 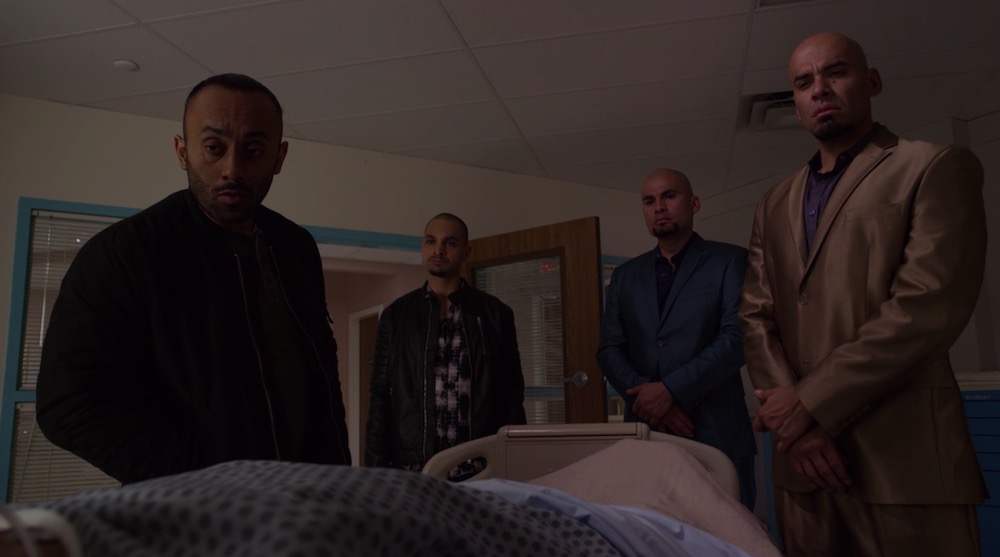 A bigger part of the story (and it’s often the case that Jimmy plays second fiddle in his own show, without that being a big problem) belonged to Gus (Giancarlo Esposito) and Nacho (Michael Mando). Gus sent two of his men into the hospital where rival Hector Salamanca is recuperating from his stroke, to provide intel on his condition, and wasn’t happy to learn that his enemy’s out of a coma and could potentially recover. Determined to have Hector out of the picture, so he can take over the city’s drug trafficking for himself, Gus arranges for a specialist from John Hopkins hospital to take over Hector’s treatment with talk of what sounds like electrotherapy. It wasn’t entirely clear to me, as she didn’t sound like a complete dummy, but the suggestion is that less orthodox care may yield bad results. And we all know that Hector will end up mute, drooling, and stuck in a wheelchair.

The storyline also produced one of the episode’s best surprises, with the appearance of fan-favourites ‘The Cousins’ - Hector’s taciturn nephews Leonel (Daniel Moncada) and Marco (Luis Moncada). They were the deadly assassins who had such a compelling arc in Breaking Bad’s third season, and now they’re in town to make sure their uncle Don Hector gets better. But it seems that Gus is a step ahead, as they don’t seem to understand that the beautiful physician from John Hopkins is the real threat to their uncle’s safety. 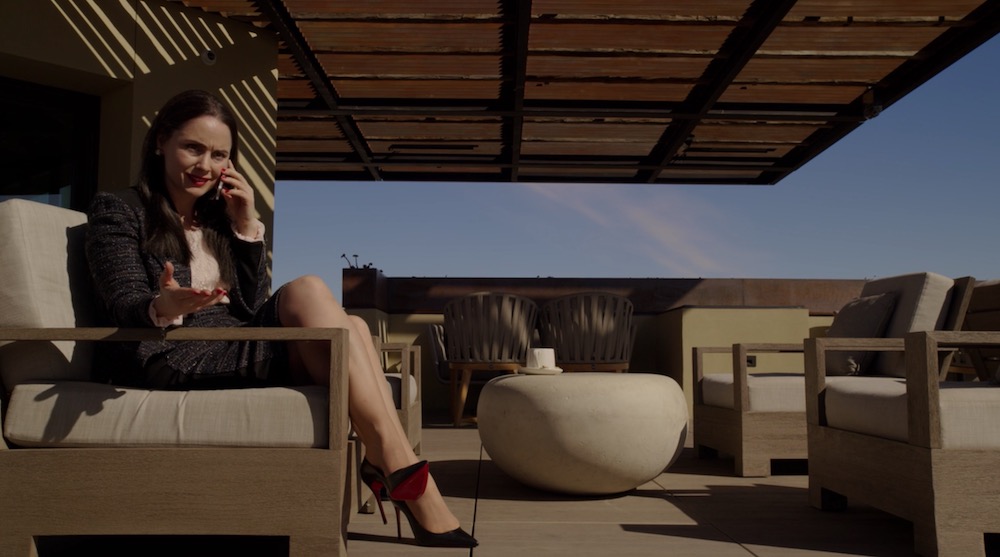 … then I suggest you give the man a badge.—Gus Fring.

In a short subplot, Lydia (Laura Fraser) began to question Mike’s behaviour, having expected him to quietly cash his weekly cheques, not actively play the part of Madrigal Electromotive’s security consultant. Quite rightly, Mike believes actually doing his job is the best way to not arouse anyone’s suspicion, whereas Lydia thinks the key to not being exposed is to never show your face and just let the payments happen because nobody cares or would notice. Gus later vouches for Mike’s reliability, despite his unusual conduct, suggesting she give him an employee badge and make his role more official. 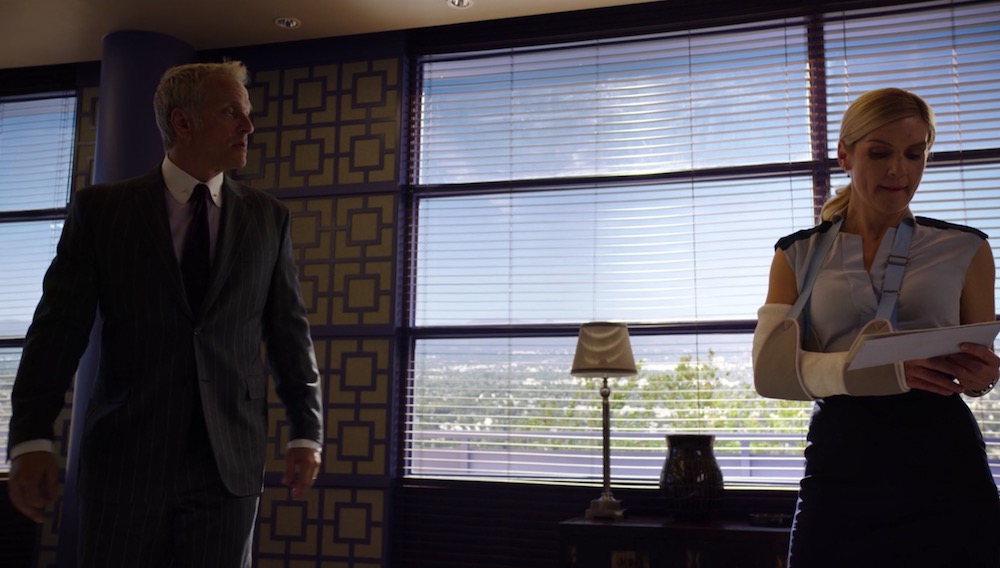 What were you thinking when you came to Jimmy on the day of his brother’s funeral and laid that shit on him? That Chuck killed himself? What’s wrong with you?—Kim Wexler.

Another of the best scenes in “Breathe” belonged to Kim (Rhea Seehorn), who arrived at HHM to represent Jimmy as Howard (Patrick Fabian) revealed how Chuck’s estate is to be carved up. Predictably, he only left his young brother Jimmy $5,000, which is essentially a token amount he wouldn’t be able to legally contest, together with a scholarship Howard wants Jimmy to sit on the board of, and a letter to Jimmy we’ll probably get to read the contents of very soon (hopefully with a voiceover from Michael McKean).

What made this scene very interesting was Kim’s outrage at everything that’s gone on, if only to note her perspective on things. Better Call Saul mostly views things through Jimmy’s eyes, but we also saw came to see why Chuck feels so bitter toward him, so it was fascinating to see how Kim’s parsed the relationship between the McGill brothers and Howard’s angle. She thinks Howard came over to Jimmy’s house to reveal his theory that Chuck committed suicide as a way to make Jimmy feel guilty, and is now rubbing salt in the wound by offering Jimmy a seat on the scholarship board that represents something his own brother would never have given him.

It’s interesting to consider Kim’s viewpoint, but I’m not sure she’s really feel this way. I thought it was clear in Howard’s scene with Jimmy last week that he unburdened himself with his suicide theory, and immediately apportioned the blame on himself because he forced Chuck out of HHM and may have tipped him over the edge. That’s clearly how Jimmy took it. So why not Kim, who was also there? Maybe she thinks that was Howard’s tactic, but it backfired because Jimmy was happy to join Howard in blaming him for Chuck’s demise? It just seemed a bit unclear to me, but then again it can be difficult to step inside Kim’s shoes because we so rarely do. 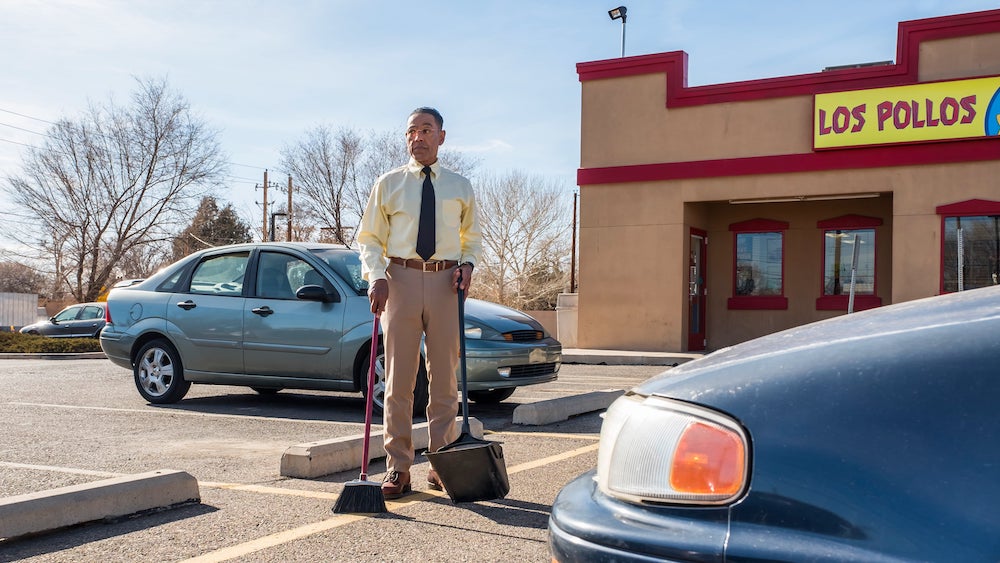 I know what you’ve done. The Salamancas, they do not.—Gus.

Better Call Saul often has titles that don’t make sense until the end, and this was true of “Breathe”. Gus had Tyrus (Ray Campbell) arrange a drug trade with Nacho and Arturo (Vincent Fuentes), during which they tried to intimidate them into accepting five blocks instead of six, trying their luck now their boss Hector’s sick in hospital. Nacho managed to stay calm and out-intimidate Gus’s men, scaring them into handing over the agreed six blocks of face a gunfight they might not survive.

However, while leaving with the drugs in an upbeat mood over their triumph, Arturo and Nacho were attacked by Gus himself and some other men. Arturo was hogtied with a plastic bag zip-tied around his head, left to suffocate to death as Nacho watched in horror, as Gus made it clear he knows he’s responsible for Hector’s stroke. “From now on, you are mine.”

So as much as Nacho is determined to get out of the drugs business, for the sake of his father if nothing else, he’s now in a worse predicament than ever being blackmailed. And if Nacho’s going to become Gus Fring’s inside man on the Salamanca operation, with the expressionless Cousins around I don’t like the odds of Nacho surviving this season if they find out what he did, or who he’s now working for…