All four movies in the 'Sister Street Fighter' martial arts saga from the 1970s, collected together on Blu-ray by Arrow Video...

Whenever anyone talks about martial arts movies, we’re almost always talking about Hong Kong cinema. The Shaw Brothers, King Hu, Bruce Lee, and Jackie Chan, were all key players in a broad umbrella genre that oscillated between OTT ultra-violent silliness and borderline superhuman athletic prowess. Mere months after Bruce Lee’s death and the posthumous release of his most famous film, Enter the Dragon (1973), Sonny Chiba emerged in The Street Fighter (1974) as Japan’s answer to the kung fu superstar. Chiba, while no less skilled than Lee, trafficked in a less subtle variety of action films: specifically, ones in which henchmen are castrated by hand and eyeballs pop out of skulls like whack-a-moles. The Street Fighter was a crazy game-changer, and it naturally spawned its fair share of sequels and spin-offs.

One such spin-off was Sister Street Fighter (1974), a thoroughly bonkers action movie that spawned three equally bonkers sequels in which Chiba-protégé Etsuko Shihomi took the reins from him. Instead of living in the shadow of the original film series, the Sister Street Fighter films take their cartoonish style and turn it up to eleven: more outlandish villains, more nudity, and, most importantly, plenty more gore. 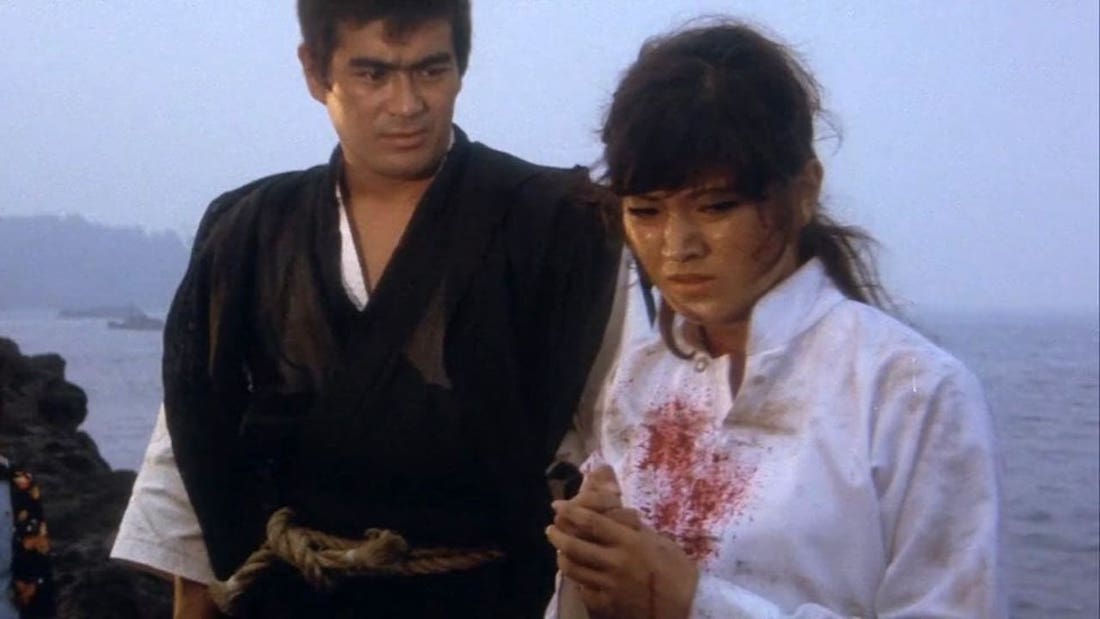 The first and best film has the feel of an x-rated comic-book movie before comic-book movies existed, being a veritable circus of nonsense plotting and nonstop action. Etsuko Shihomi plays Li Koryu, a martial artist brought in by the police to rescue her undercover cop brother from a Yokohama drug lord. The complication? The drug lord has assembled a diverse gang of criminals and killers to protect his compound. These killers run the gamut from Hammerhead and his henchmen (who all wear huge black cone-shaped helmets) to a group of kickboxing women in matching leopard print outfits known as the Amazons 7.

As if that wasn’t enough, these assassins seem to be hoarding an impossibly large arsenal of weapons, all of which are announced in freeze-frame action shots each time they’re employed. The weapons vary in eccentricity for your average everyday nunchucks to sai to—my personal favourite—proto-Wolverine knuckle blades, and all of them are used to their most extreme and violent possibilities. Physical trauma is the name of the game here: men are disembowelled, blades are lodged in skulls, and there’s a surplus of slicing and dicing into oblivion courtesy of the sister street fighter herself. It’s everything one could hope for in a martial arts movie, and then some: no frills bloody thrills. 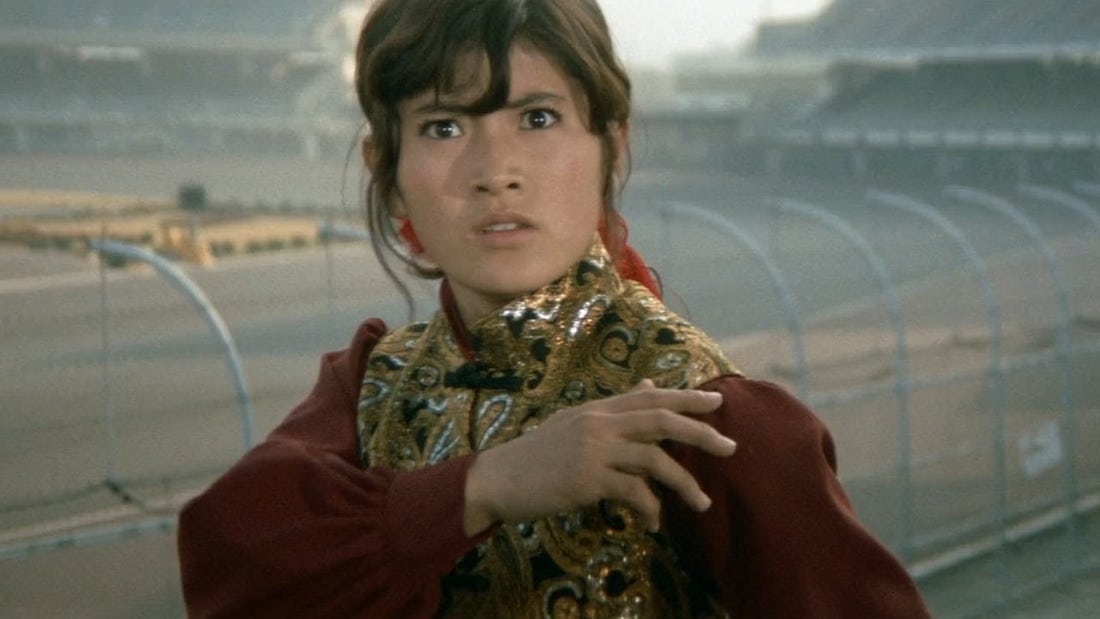 The second film in the series doesn’t have quite the same shock value. By and large, Sister Street Fighter: Hanging by a Thread (1974) is just more of the same: a similar plot, similar structure, and an overall feeling of déja vu that permeates events. It does what the first movie did but with little less punch. That being said, that lack of freshness is hardly a major issue given that nobody is watching a movie titled Sister Street Fighter: Hanging by a Thread for a nuanced narrative. On the front of pure entertainment, this film still delivers 87-minutes of virtually unbroken action scenes.

Once again, Koryu has been assigned by the police to rescue someone from criminals in Yokohama. Before you cry “hey, we’ve seen that before,” take note of the fact that this time around she’s rescuing a woman, not a man, and her captors are diamond smugglers, not drug smugglers. See, it is a different movie! The smugglers have a plot to move their diamonds in the most covert method possible: surgically implanting them in the butt-cheeks of Chinese prostitutes. But wait, there’s more! This time around Koryu’s sister is also involved in the criminal operation, complicating matters

Admittedly, it’s a little far-fetched, but why shouldn’t it be? This is a movie in which characters fight in racetracks, on top of moving trains, and even on logs floating on a river. It’s less a coherent film than it is a series of action set-pieces, and while the villains are a little less colourful and eccentric this time around—butt-implanted diamonds aside!—the action is no less frenetic and thrilling. Even as the wackiness is dialled back, the sense of fun is very much intact. It may be derivative and less worthwhile than the original, but it’s still a pretty exceptional action movie with next to no filler. 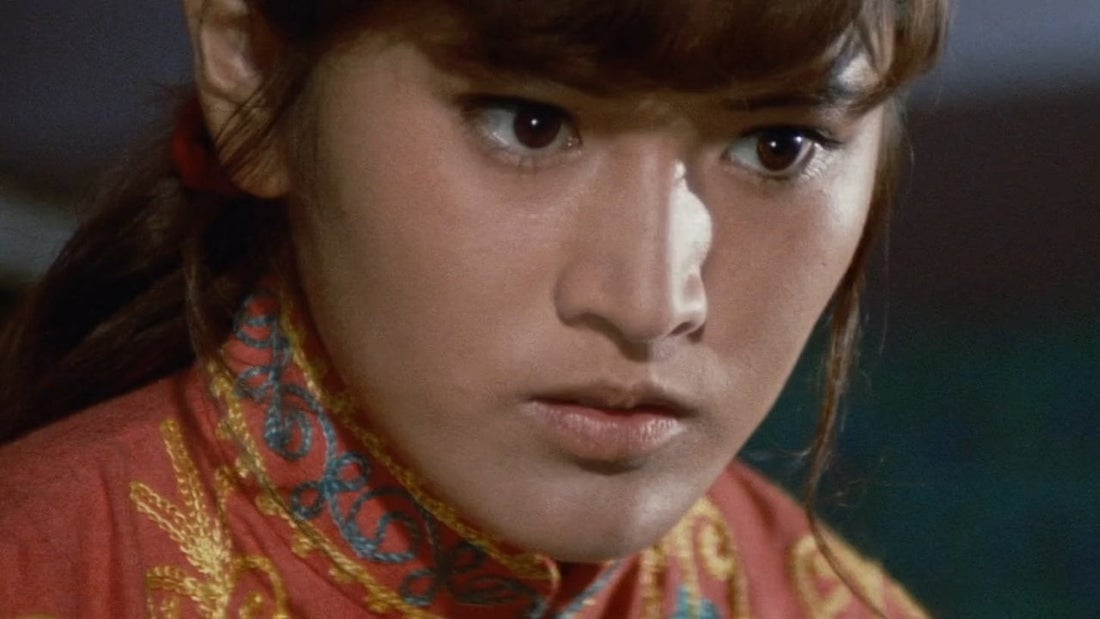 The Return of the Sister Street Fighter (1975)

The series found its footing again with the third and technically final film, which feels familiar—yes, someone else has been kidnapped in Yokohama—but never boring or stale. Koryu is back, of course, and this time around she has to contend with a man who’s taken a young girl hostage to lure Koryu to him and his carefully selected gang of villains.

This third entry is a welcome return to the excess of the first. The villain is a cartoonish carbon copy of Auric Goldfinger and the action feels lighter and less self-serious. While it would be a pretty big stretch to call this a comedy, the film is rife with visual gags—my favourite being when a man is punched in the face and his hat flies off and lands neatly on the head of a statue. Elsewhere, the film just feels like it regained some of the exploitation movie spirit lost in its predecessor. It’s a little more self-aware than Hanging by a Thread and that ability to recognise how goofy it is makes the whole movie go down smoother.

There is one big caveat to this, which is the comparative lack of blood and gore. The movie is packed from beginning to end with fight scenes that are now almost entirely bloodless, which feels like a big loss after all the drop-your-jaw, cover-your-eyes gory moments of the first two films. It’s the best sequel in the series, no question, but it’s missing the morbid humour that came with the extreme bloodshed of the first two Sister Street Fighter films and Sonny Chiba’s original The Street Fighter.

Still, that is a minor complaint when one looks at the bigger picture. This is a goofy, nonstop rollercoaster ride of martial arts movie tropes blurring together into a bizarre, thoroughly offbeat whole. If the franchise ended here, like it was intended, it would have been a wonderful note with which to cap things off. 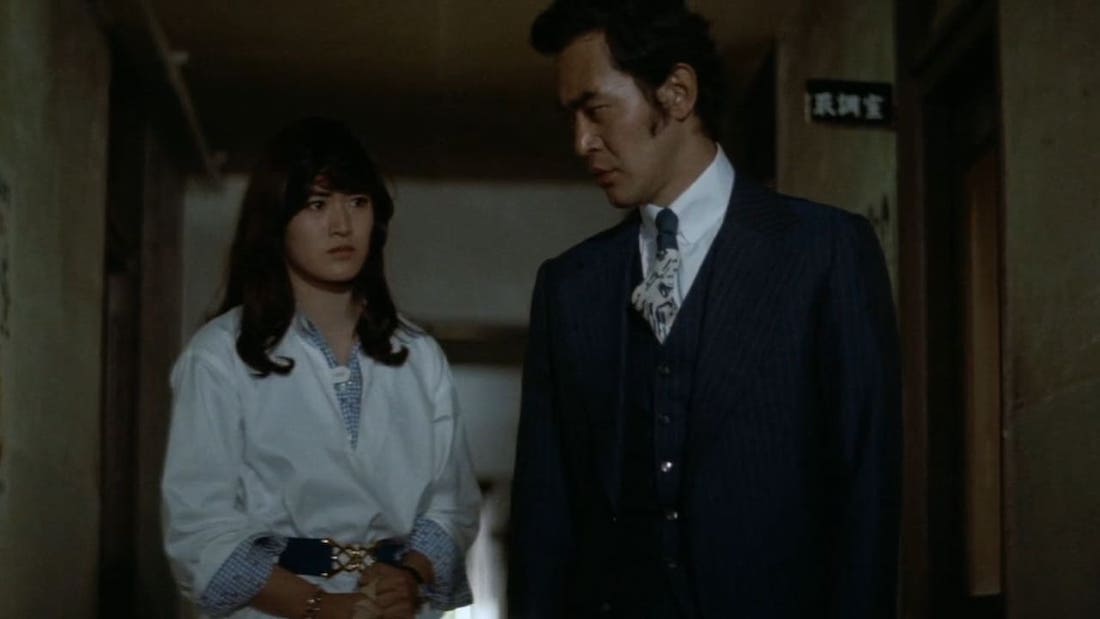 Of course, it didn’t quite end there! The director of the original The Street Fighter made this follow-up in 1976, and although it arrived only a year after the last film, it can’t help but feel like The Godfather: Part III (1990) of the Sister Street Fighter franchise: a sequel nobody wanted after the series wrapped things up so neatly.

Technically, it isn’t a sequel to the previous films. Etsuko Shihomi is there, still kicking ass, but she’s playing a different character. The plot, too, is estranged from those of the earlier films, which sounds like a good thing in theory but in practice is monumentally boring. Gone is the wall-to-wall action and the plot takes priority. With more room for the narrative to breathe, it becomes painfully apparent how flimsily constructed the story really is,

Shihomi is now playing the daughter of a kimono salesman, entangled in a convoluted plot revolving around criminals using a film production as a front for their illegal activities. Unlike in the first films, when the laughter was more a result of the absurdity of it all, this movie is a bonafide action-comedy, and it doesn’t work. It’s never funny enough during the comedy moments or exciting enough in the action sequences.

It’s not a bad movie and has its moments, but it’s a letdown when viewed alongside the first three. There’s nothing wrong with tweaking the formula, which feels necessary after three remarkably similar films, but it just doesn’t come together. The tone is off and director Shigehiro Ozawa seems to have forgotten that the reason people watch these movies is for the near-constant action. Interrupting the fights with lacklustre comedy makes its 77-minutes feel a whole lot longer, drains it of the fun and joy that go hand-in-hand with the collection. 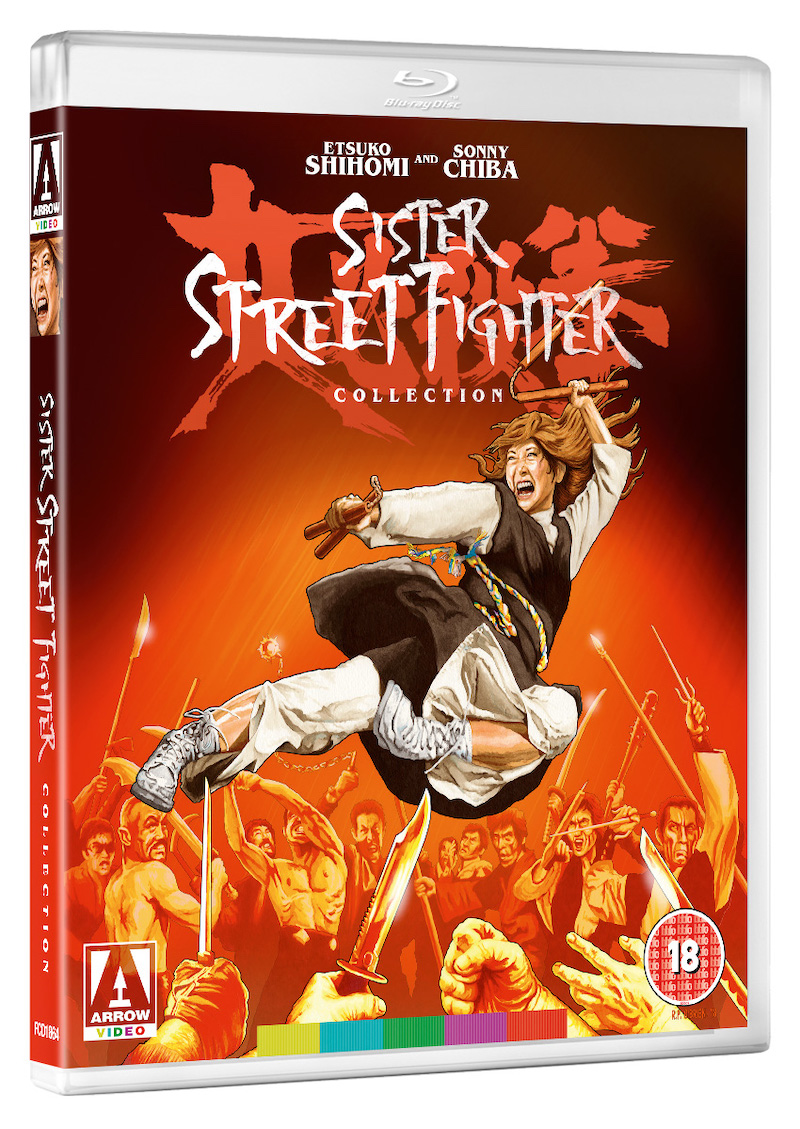 Written By
Joseph Shapiro
More from Joseph Shapiro
A demented nun slides through morphine addiction into madness, all while presiding...
Read More